After 10 days of exciting programmes, pop ups, local and international authors and new ways of engaging with literary arts, the 21st edition of the Singapore Writers Festival (SWF) finally drew to a close last Sunday, after opening audiences up to the many worlds authors created and brought to life through their writing and thoughts. 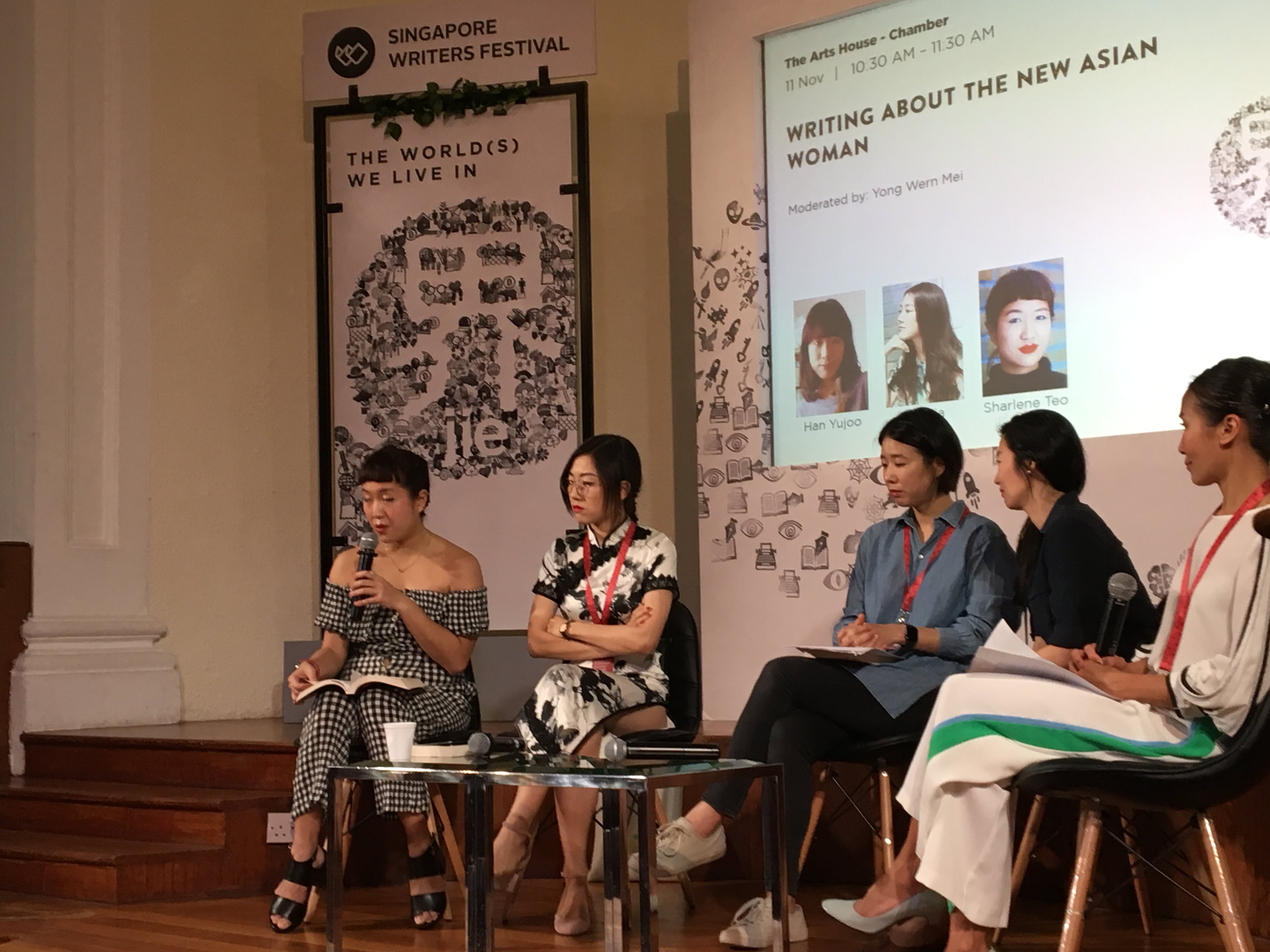 On the final day of SWF 2018, we began first thing in the morning with a panel discussion on Writing About The New Asian Woman. Moderated by Yong Wern Mei, the panel comprised UK-based Singaporean author Sharlene Teo (Ponti), Chinese sci-fi author Xia Jia (最小说), and Korean author Han Yujoo (The Impossible Fairytale, To The Moon). After reading short five minute excerpts from their works (curiously, both Xia Jia and Yujoo chose to read English translations of their work, perhaps losing certain nuances of the original language), the women went on to discuss the process that drives their writing, and the position of the woman writer today.

The panelists, each considered a mover and shaker of fiction in their own right, spoke of the change in scene these days, with the expression of gender identity and roles no longer as fixed as they once were, allowing for alternative, new takes on what it meant to be a woman in today’s world. Particularly as East Asian women, there seemed to be a need to break the widely held stereotypes of orientalism and subservience, and quite simply, to be honest in their portrayals and writing, writing not necessarily as women, but as humans, whose womanhood would then come to the forefront based on the societal circumstances that dictated their identities and actions. What we are left with is not a clear direction on what it means to be an Asian woman today, but the opening of possibilities the future offers, and the new opportunities present to showcase the whole spectrum of womanhood across the world. 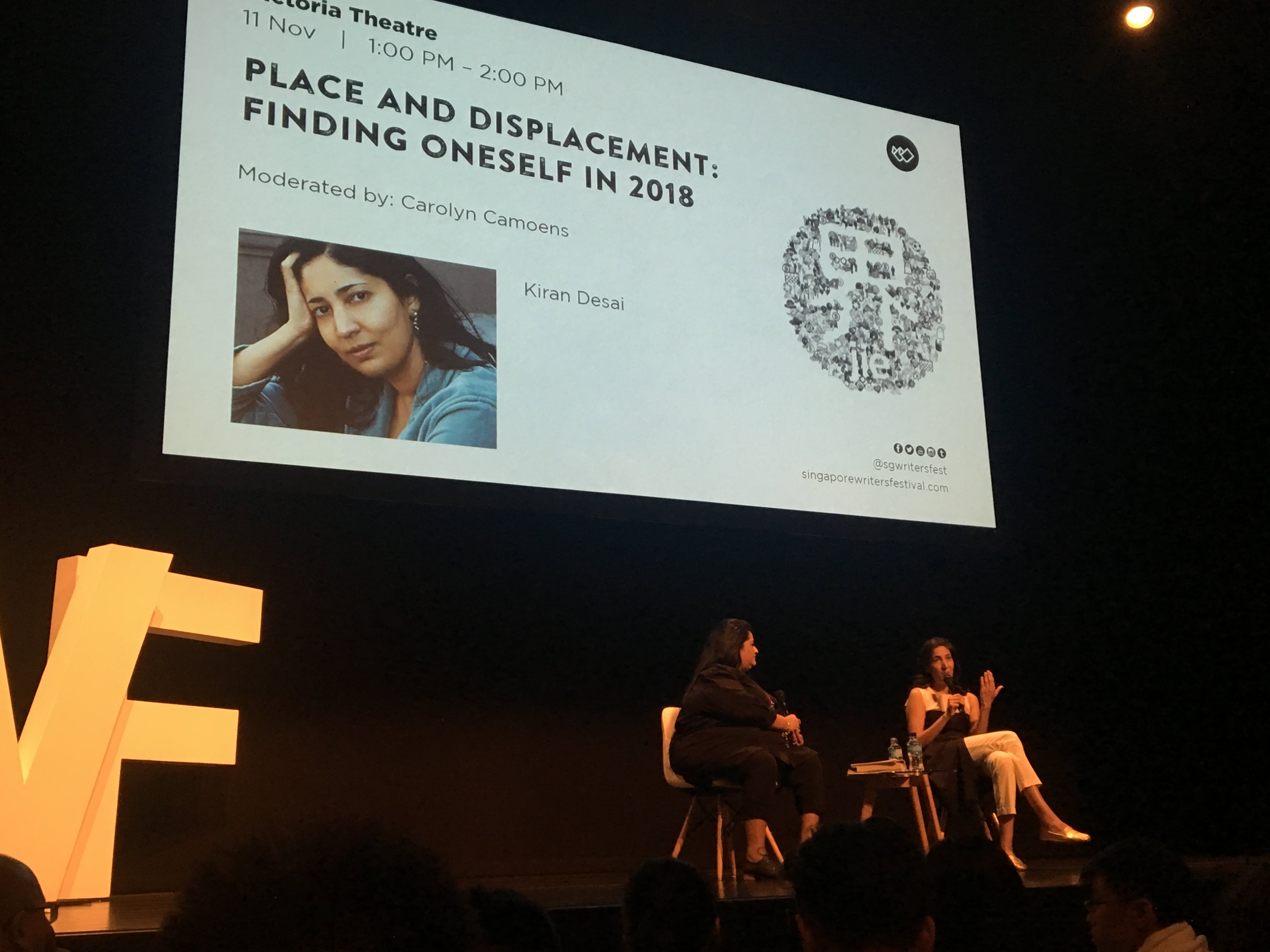 Midway through the day, we found ourselves at the Victoria Theatre for the final headlining author of this year’s SWF, after David Sedaris and Irvine Welsh. New York based Indian author Kiran Desai certainly warrants the nearly full house she commanded in that session, having two critically acclaimed books to her name – 1998 novel Hullabaloo In The Guava Orchard (a personal favourite for its tragicomedy) and the 2006 Man Booker Prize-winning The Inheritance of Loss. While it’s been 12 years since she’s last published a book, she assures us that her next one should see a release next year – a novel titled The Loneliness of Sunny and Sonia, following a pair of star crossed lovers through history as they are separated across lifespans through circumstance.

In the talk itself, Desai proves herself to perhaps be one of the most eloquent speakers at the SWF this year, utilising a perfectly pitched script that reads easily, like one of her novels. Awash in both humour and hard truth, Desai spoke of the importance of written work to keep us going in an increasingly fractured world. Desai’s talk takes on a deeply personal tone as she tells of the early influences she had growing up, and their ability to mystify her and affect her perspective of the world. For Desai, the novel serves as a way to relocate and dislocate, to take one out of the limited scope of affairs we have, to escape and to see things differently. By extension then, that becomes the duty of the author, and suggests that perhaps we should all be writers, and open up this realm, these different worlds we each inhabit coming out in the open as we tell these stories of ourselves and of our experiences. Confident, polished and saying exactly as much as she needs to, we await Desai’s third novel with bated breath, and cannot wait to see what new literary sorcery she works on us once again. 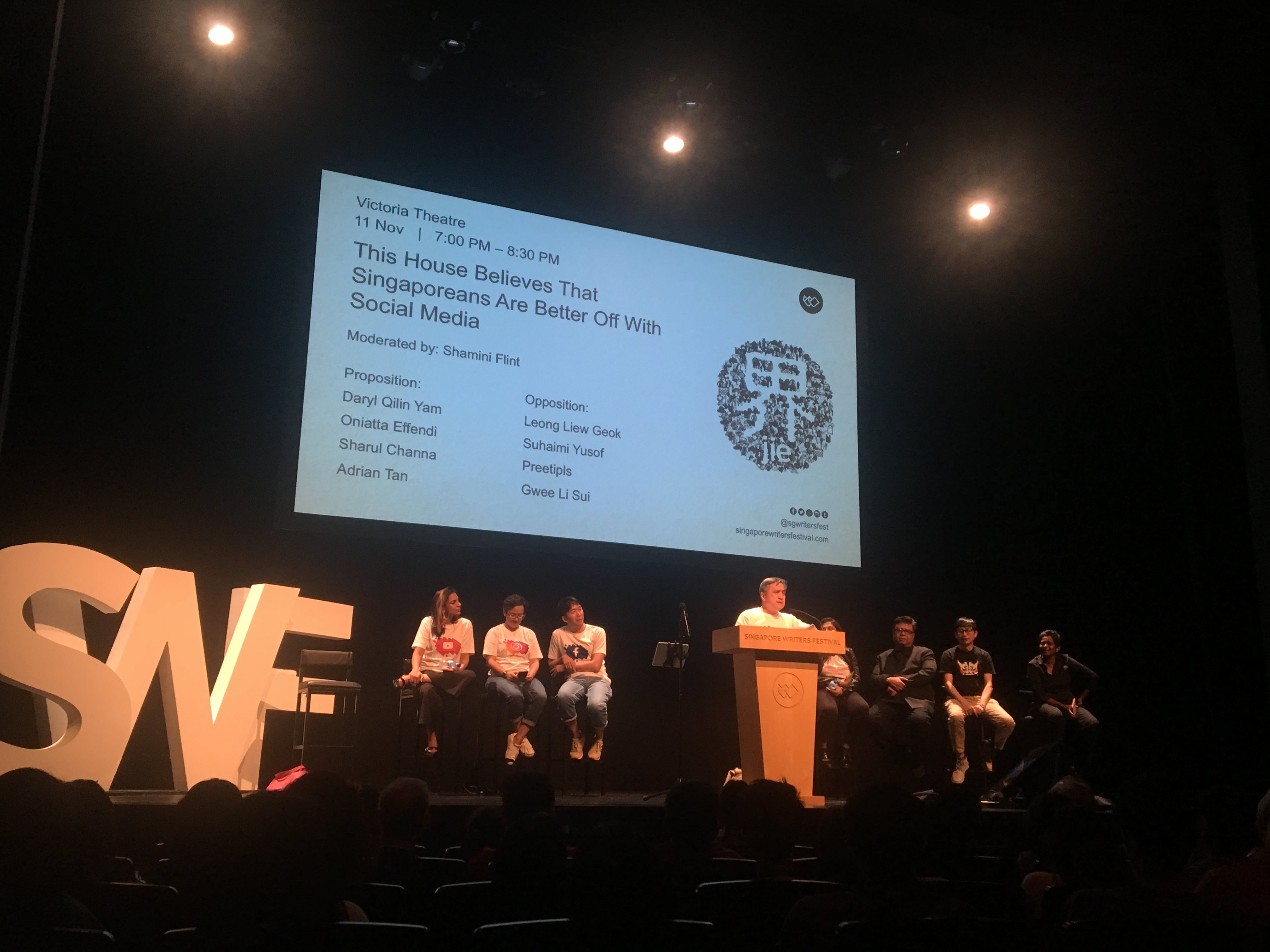 The day, and in fact, the entire festival ended with the annual tradition of the SWF Closing Debate. For the first time, the debate was moderated by Singapore-based Malaysian author Shamini Flint, who previously sat on either team, offering up the perspectives of one from ‘across the Causeway’. Always a roaring end to the festival, this year’s edition was no different with the topic “This House Believes That Singaporeans Are Better Off With Social Media”, and results more often than not, in a performance that is more comedic than serious, a hilarious way of engaging with the topic.

On the proposition side stood author Daryl Qilin Yam, actress Oniatta Effendi, comedian Sharul Channa and team leader, author/lawyer Adrian Tan. On the opposition side stood poet Leong Liew Geok, comedian and actor Suhaimi Yusof, social media darling Preetipls, and team leader, author and Closing Debate veteran Gwee Li Sui. As the night raged on, the teams waged verbal war on each other, as the standard debate rulebook was completely thrown out the window – Daryl Yam opened the debate with a caveat and accusation that he was originally meant to be on the opposition team, before launching into an impassioned speech surrounding the impact of social media on the LGBTQ landscape with two slides worth of research and some personal anecdote. Leong Liew Geok stood opposed, the self-proclaimed ‘oldest person onstage’ and woman of steel as she delivered the most ‘serious’ speech of the lot, making powerful points one after another and inspiring in spite of her team’s futile stand, a true force to be reckoned with.

Actress Oniatta Effendi brought the energy levels up again as she used moderator Shamini’s own enraged Facebook post about the recent Malaysian elections as a hilarious example about the power of social media and lobbying personal attacks accusing each member of the opposition of profiteering off social media, while Suhaimi Yusoff countered weakly comparing social media influencers to prostitutes. Sharul Channa delivered her now signature brand of acid-tongued comedy laced with profanities, speaking about how social media has helped make Indian men less violent (“my husband unfriended a guy who touched me instead of punching him in the face!”), and acted as the alternative to the mainstream allowing people like Preetipls to find the success she has, while Preetipls retorted with snide references to the toxic behaviour social media has inspired in people today, including a sharp remark about how a certain YouTuber could have better spent his time recruiting another teenage boy to gain views rather than engage in misguided social experiments.

Throughout the debate, moderator Shamini proved her worth with plenty of laugh out loud punchlines and remarks that got the crowd applauding, sharp witted and delivering great observational humour and witty retorts, before it came to the final showdown between leaders Gwee Li Sui and Adrian Tan. The opposition, already on the disadvantaged side of the debate, was out of options, as Gwee launched into an increasingly absurd monodrama about becoming a literal turd as one sits in one’s room trolling social media, before Leong took the remainder of his time to toss a last ditch example to convince the audience, even ending poetically with a direct reference to her time being up, never missing a beat. But when the eloquent Adrian Tan took to the stage, it was obvious who were the clear winners of this debate (“do you know how much he’s paid by the hour?!” Shamini remarks), as he told what is essentially a historical epic while weaving in terrible, groan-worthy puns, making full and complete use of his time and he crushed the opposition under his words.

Even with the proposition crowned the winners of the debate, there really weren’t any losers, as the SWF drew to a close at last. The SWF as we know it has come to an end, with Yeow Kai Chai finally stepping down as festival director after heading the festival since beginning. In his final year as Festival Director, the 21st edition of SWF ends on a celebratory note – with a lineup that may not have glowed as much as previous years, but certainly, still offered up thought provoking programmes that fittingly looked towards a new age and new future, considering the endless possibilities still out there for a literary festival with as long a history as SWF has had. As Kai Chai stepped onto the stage to take a final bow and conclude the festival, we’re left wondering about how the festival will continue to grow, evolve, and bring the literary arts to greater heights still as poet Pooja Nansi takes over as lead in 2019 and beyond