The Singapore Art Museum has announced the winners of the seventh edition of the President’s Young Talents at an awards ceremony graced by Madam Halimah Yacob, President of the Republic of Singapore. Taking home the Grand Prize was artist Weixin Quek Chong with her artwork titled sft crsh ctrl, while Yanyun Chen‘s The scars that write us garnered the most votes by members of public at the exhibition, clinching the People‘s Choice Award. The Grand Prize and People‘s Choice Award are worth $20,000 and $5,000 respectively, and will go towards the development of their artistic practices.

Inaugurated in 2001 by SAM, the President’s Young Talents is the nation‘s only mentoring, commissioning and award programme for emerging Singaporean artists aged 35 and below. Alumni and winners of earlier editions include the likes of Heman Chong, Boo Junfeng, Charles Lim and Ang Song Ming, many of whom have gone on to develop outstanding work in and beyond Singapore. This edition features artworks by Yanyun Chen, Weixin Quek Chong, Debbie Ding, Hilmi Johandi and Zarina Muhammad, developed under the guidance of a curator-mentor panel made up of David Chan, Roger Nelson, Grace Tan, Jason Wee and Zaki Razak. 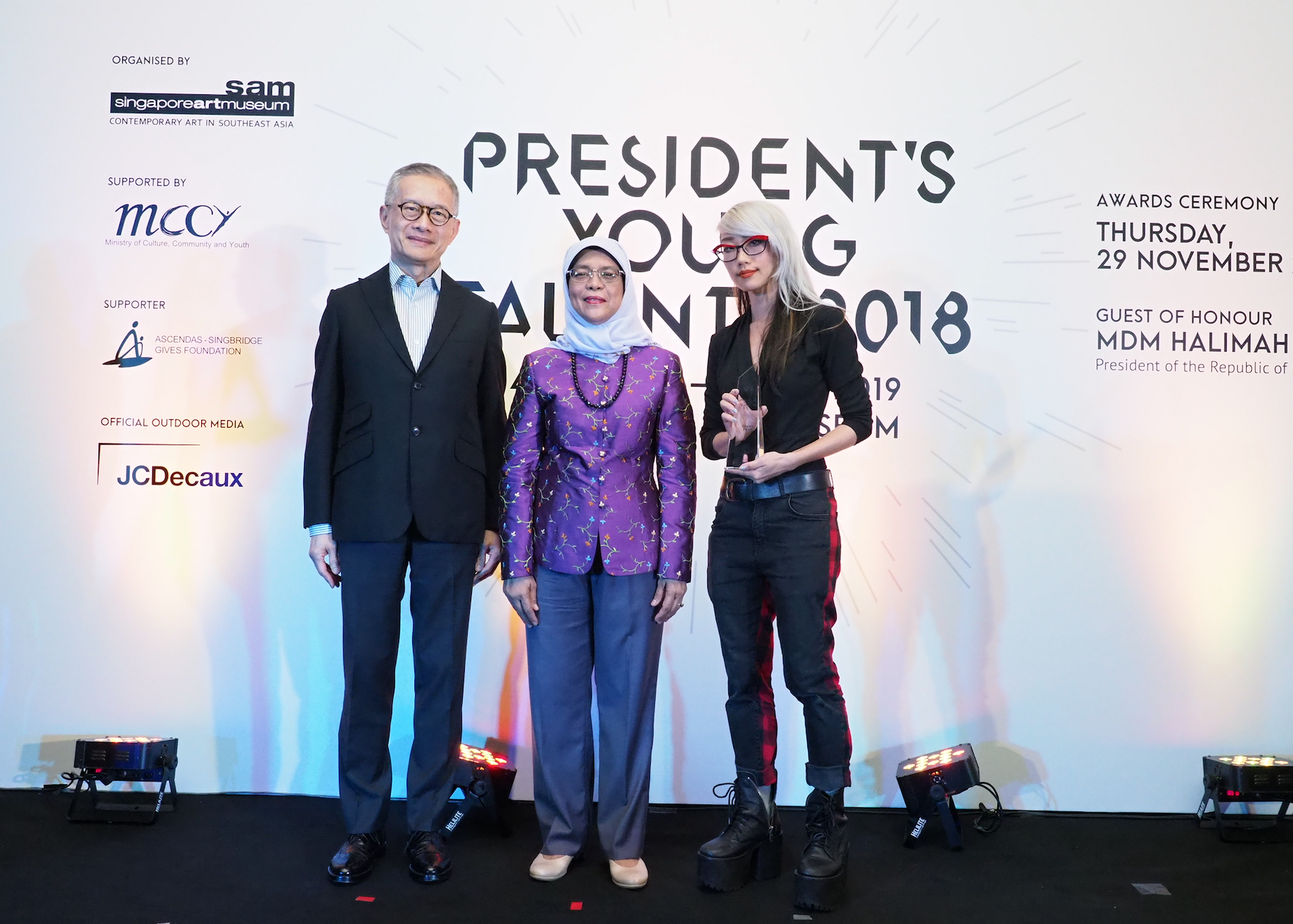 In a joint statement, the jury panel said: “What a privilege it was to experience groundbreaking installations by five young Singaporean artists at a national institution. The decision was not an easy one as each work had strengths that were recognised across the judging panel. After much deliberation, Weixin Quek Chong‘s installation, sft crsh ctrl, stood out for its command of space and material, and the fluidity with which she executed her concept. We also recognise Weixin‘s work contains elements of risk integral to contemporary practice.”

An installation comprising draped materials – from sheets of latex to faux fur – and objects that evade traditional inquiry, sft crsh ctrl challenges viewers to disengage from their instinct to rationalise the artwork, and in so doing, reveals the complexity of being dependent on logic. On winning the Grand Prize, Weixin Quek Chong says: “The President’s Young Talents has been a formative experience for me, and the opportunity to develop my work for the commission really pushed me to try things I had only imagined previously. It was great having so much understanding and encouragement from my mentor and the Singapore Art Museum, as well as all the combined efforts to realise the installation. It was already amazing to be able to be part of this edition’sPresident’s Young Talents, and this is really more than I had expected; I’m so grateful for this support to further my work.” 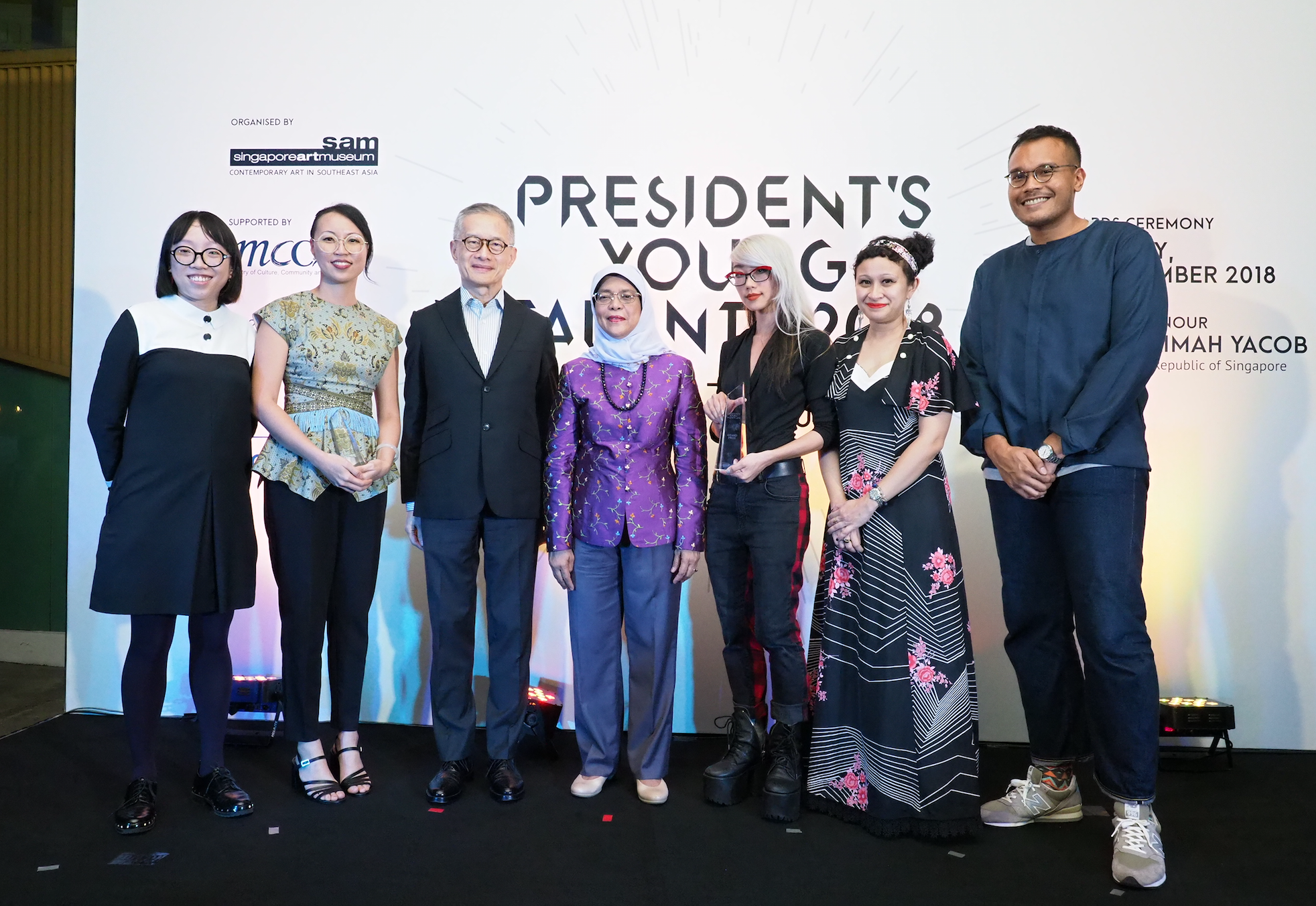 On her artwork securing the highest number of public vote on-site at the exhibition, Yanyun Chen says. “It is an honour that a story about one family’s keloids is able to speak to a wider public, and for these thoughts to echo and reverberate with others. It heartens me that scars, as a repository of memories and narratives, can have voices of their own, and can remind us that they are beautiful in their own way. May we all come to terms with our wounds. Thank you for this award, for your votes and for my family for trusting their stories with me.‘

President’s Young Talents 2018 runs at SAM at 8Q from 4th October 2018 to 27th January 2019. Admission is free for Singaporeans and Permanent Residents. For more information, visit the website here