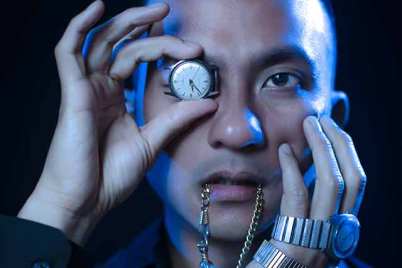 A moving lesson on the life-cycle of objects.

There is a belief in the Japanese Shinto religion that everything, including everyday household objects, possesses a life force of its own. From umbrellas to notebooks, clothes to food, each of these items, while seemingly non-living, have the potential to mean and be so much more than what they initially appear to be to the right person. Similar to such a concept, artist Loo Zihan’s Catamite attempts, over the course of each session, to facilitate a lesson in seeking the deeper meaning behind our everyday objects, and finding clarity in ourselves by understanding our own relationships and histories with them.

For Catamite, Centre 42’s Black Box was temporarily turned a clean and pristine white. Here – nothing is in the shadows, and we too can be an open book, vulnerable yet safe in this pure space that Zihan has created. Opening with a quick briefing to the 20 audience members for this lecture-performance, Loo pre-empted us with how participatory this experience was set to be, and to get ready to get to know each other better and immerse ourselves fully in each exercise to glean the most from it. The success of Catamite, like all participatory shows, is largely dependent on the willingness of audience members to allow themselves to express themselves fully and let ourselves go on this journey together.

Organized into five segments, Zihan was always clear in his instructions and confidently led each exercise. We began with ‘Object Exercise’, a process where we lay out the contents of everything we had brought with us, with the white floor acting almost like a canvas for a flat lay as we pondered over each individual item and the things we had chosen (or subconsciously) brought with us in our bag. Selecting one item out of the many we had brought, we were then tasked to explain why we had chosen this piece (with Zihan assuring us that there were no right or wrong answers), before moving into a circle to gather the objects onto a single table, altar-like as it held these objects as if readying ourselves for a sacred ritual.

In the second part of the performance, Zihan explained the origins behind Catamite with how he began the project after spending 3 months in Melbourne, conducting research of queer archives before returning to Singapore to create his own archive back in 2016. Shown at the Institute of Contemporary Art, a total of 81 objects from 60 contributors were gathered, from a candle used across three productions of Completely With/Out Character (a monologue by first openly HIV-positive Singaporean Paddy Chew), to a series of uniforms that showcased the fetishization of certain organisations or symbols within our society. An educational lecture for the most part, Zihan also expressed his disappointment in not being able to maintain or continue the project due to limitations, segueing into him talking about the failed repeal of Section 377A of the Penal Code. It is at this point the performance is no longer simply an exercise, but transforms into something far more personal and emotional, recognizing that this is a project that means so much to Zihan as he expressed his frustrations bitterly about how, despite all our progress, we were still stuck in this rut with regards to gay rights.

It is at this point that we returned to our exercise, as we proceeded to document our objects. But unlike simply recording details about the existing state of our chosen object, Zihan tasked us to answer questions about each object’s significance, function, and its reason for existing or why we had it in the first place. We were then tasked to choose another person’s object, taking care of it for about 30 minutes and attempting to understand it as a stranger before writing about it.

Part 4 of the project sees Zihan staging a re-enactment of an early courtroom trial in the 1930s where 377A was invoked, having audience members play an officer (Captain Douglas Marr), a Malay boy (named Sudin Bin Daud, the titular ‘Catamite’ or male prostitute), and even the British judge involved (Judge Conrad Oldham). This re-enactment was helped by the commitment level of the audience members involved, which drove the point of the trial home.

The trial in turn, made us think about how a single object might have had different levels of significance to another. Returning to the object we had chosen, we carried out the final segment of the project and penned a note to leave behind. While we certainly wished we had a little more time to consider and be with the object in order to better understand its significance to its owner, the exercise nonetheless achieved its goals – to get us thinking about the differing value of an object as seen through different eyes.

Catamite is driven by a need to create conversation and open minds to new possibilities, and see things from the bigger picture rather than the myopia we often subject ourselves to. Using historical fact and his own effective pedagogy, Zihan creates a safe space where all audience members can feel comfortable participating fully in the experience, encouraging healthy discussion and an ease of leaving behind all of one’s apprehensions. Through the honesty displayed from both Zihan and fellow audience members in Catamite, one leaves the performance-lecture more whole than before, opening our minds to the different points of view present around us, and seeing the world through another’s eyes.