LONDON – Designed specifically for audiences with profound and multiple learning disabilities (PMLD), Frozen Light theatre company presents The Isle of Brimsker. Embarking on an extended UK tour from now till June, The Isle of Brimsker gives these people with disabilities a chance to experience the magic of theatre with this multi-sensory story of discovery, friendship, isolation and how we react to change.

Knowing that over 16,000 people in England live with PMLD, The Isle of Brimsker has been developed specifically for these audiences, structured to provide an accessible and theatrical environment that is performed within close proximity to small groups and with strong sensory and participation elements. For many of the audiences who watch this production, it will likely be their first time in a mainstream theatre venue. Performing to an intimately sized audience, the three-strong cast accompanies the audience from the foyer into the performance space, ensuring a smooth transition into the theatre environment.

The play itself follows a lighthouse keeper who lives on a desolate outcrop surrounded by stormy seas. Duty bound to maintain the light that guides boats away from danger, she lives a solitary existence, until a runaway lands on the shore. With change on the horizon, together, they face the inevitable. 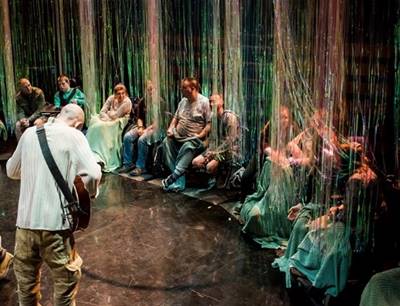 Says Frozen Light Co-Artistic Director Amber Onat Gregory: “The theatre should be for everybody, and more and more venues are starting to look at their programme to see how they can be more accessible, how they can reach all sections of society. With this tour we will be reaching more people with PMLD than ever which we are really excited about.”

Adds Lucy Garland, Frozen Light’s other Co-Artistic director: “We are really thrilled about our new show The Isle of Brimsker. With this production we have pushed the sensory exploration further than ever before and can’t wait to see what reactions our audience have to the show. The show explores themes of transition and friendship and we hope this resonates with our audience. We have worked with some exciting commissioning partners on this project and, now we have premiered the show, are excited to take it to audiences throughout the country.”

Frozen Light launched in 2012 as a response to the fact that arts venues rarely cater for audiences with complex disabilities. In 2016 they presented the first ever Edinburgh Fringe show specifically made for audiences with PMLD, to sell out audiences. They returned to the Fringe in 2017 as part of the British Council Showcase.

The Isle of Brimsker tours the UK from now till June 2019, stopping in London’s artsdepot on 5 Nether Street, Tally Ho Corner, N12 0GA from 13th to 14th February 2019. For full list of tour dates and tickets, visit their website here

0 comments on “Touring The UK: The Isle of Brimsker by Frozen Light (Preview)”