The dynamic duo are back again, with tight character work and strong performances that brings the laughs hard and fast.

Whether or not you caught the 2016 version, or are curious to see what Dream Academy has in store with this rerun, Meenah and Cheenah is a comedy whose audacious yet relatable jokes can and will stand the test of time. Reuniting theatre extraordinaires Siti Khalijah and Judee Tan, this restaging of Meenah and Cheenah continues to easily draw laughter from audiences once they’ve settled in, playing on recognizable stereotypes in a relatable, poignant and of course, hilarious way.

Directed by Selena Tan, in spite of the script being more or less identical to 2016’s run, there is incredible staying power to the rapid fire jokes and characters performed by both Siti and Judee, embodying different versions of the Malay ‘Meenah’ and Chinese ‘Cheenah’ across history and fiction. With this production happening hot on the heels of a certain incident involving a Chinese woman ‘trapped’ in a shared ride, this run of Meenah and Cheenah cleverly incorporated a Gojek car into the Pontianak scene, showing how fast the writers have been working behind the scenes to stay relevant and continually maintain the sketches’ cultural currency. Even a hospital scene involving babies that cracks a joke at the expense of the much beleaguered bicentennial works wonderfully with its sharp observational wit, quintessentially Singaporean humour at its finest. 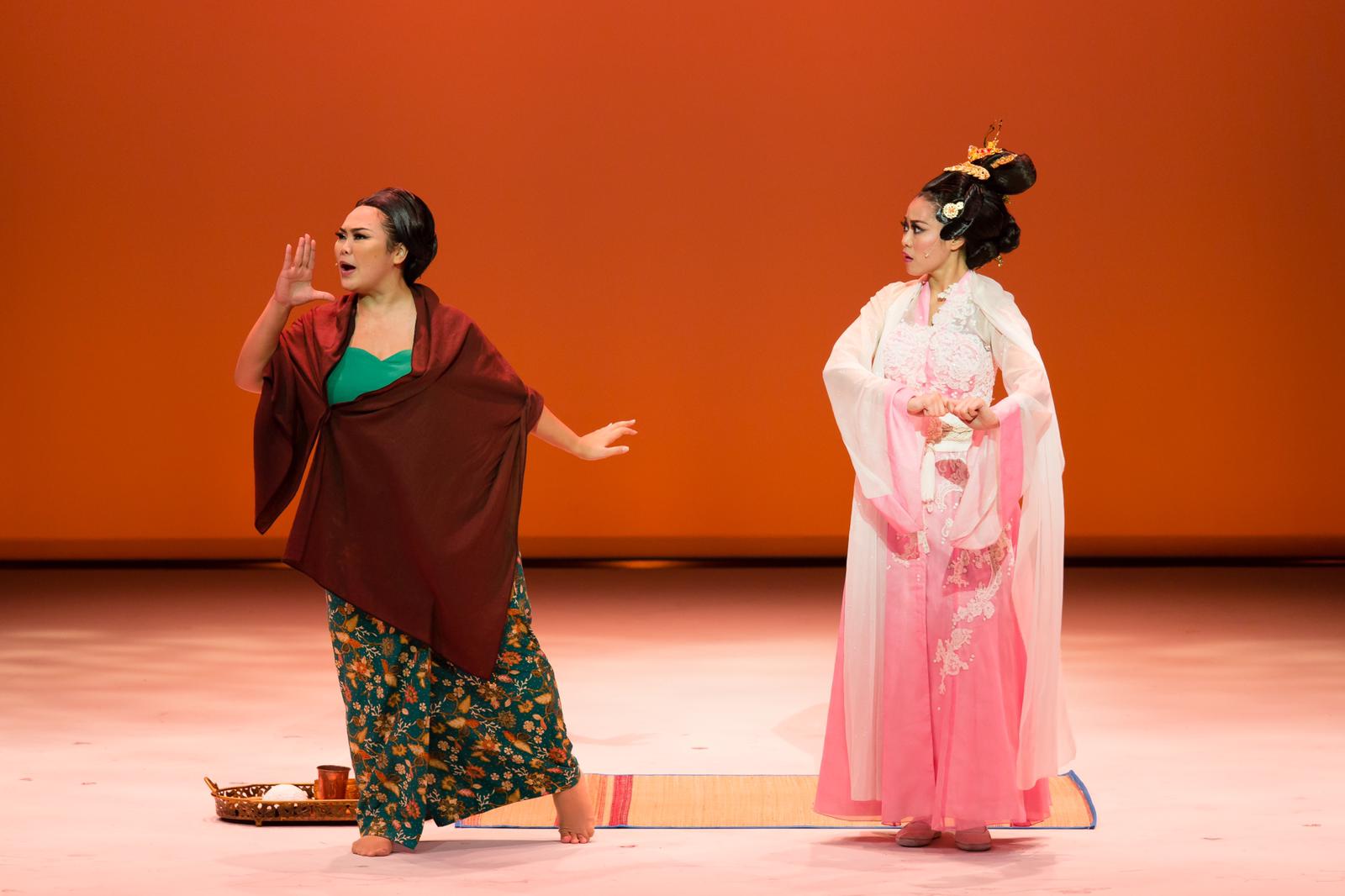 And even if you’re unfamiliar with Malaccan princess Hang Li Po, or the references to ICQ, the indelible bond and chemistry that Siti and Judee share onstage that makes each and every one of these characters’ personalities immediately recognizable. Each sketch tightly paced, it’s safe to say that both actresses, being onstage for almost the entirety of this 80 minute performance, are working hard and fast as they change costumes in the blink of an eye (kudos to the stagehands helping out backstage) before returning to stage perfectly poised without having broken a single sweat, nimbly delivering every punchline with masterful comic timing and energetic gusto. Both actresses also showed off their flexibility and quick wit in the opening sequence, making mention of actress Jeanette Aw who they spotted in the audience, proof of their slick improv skills honed over rehearsals. 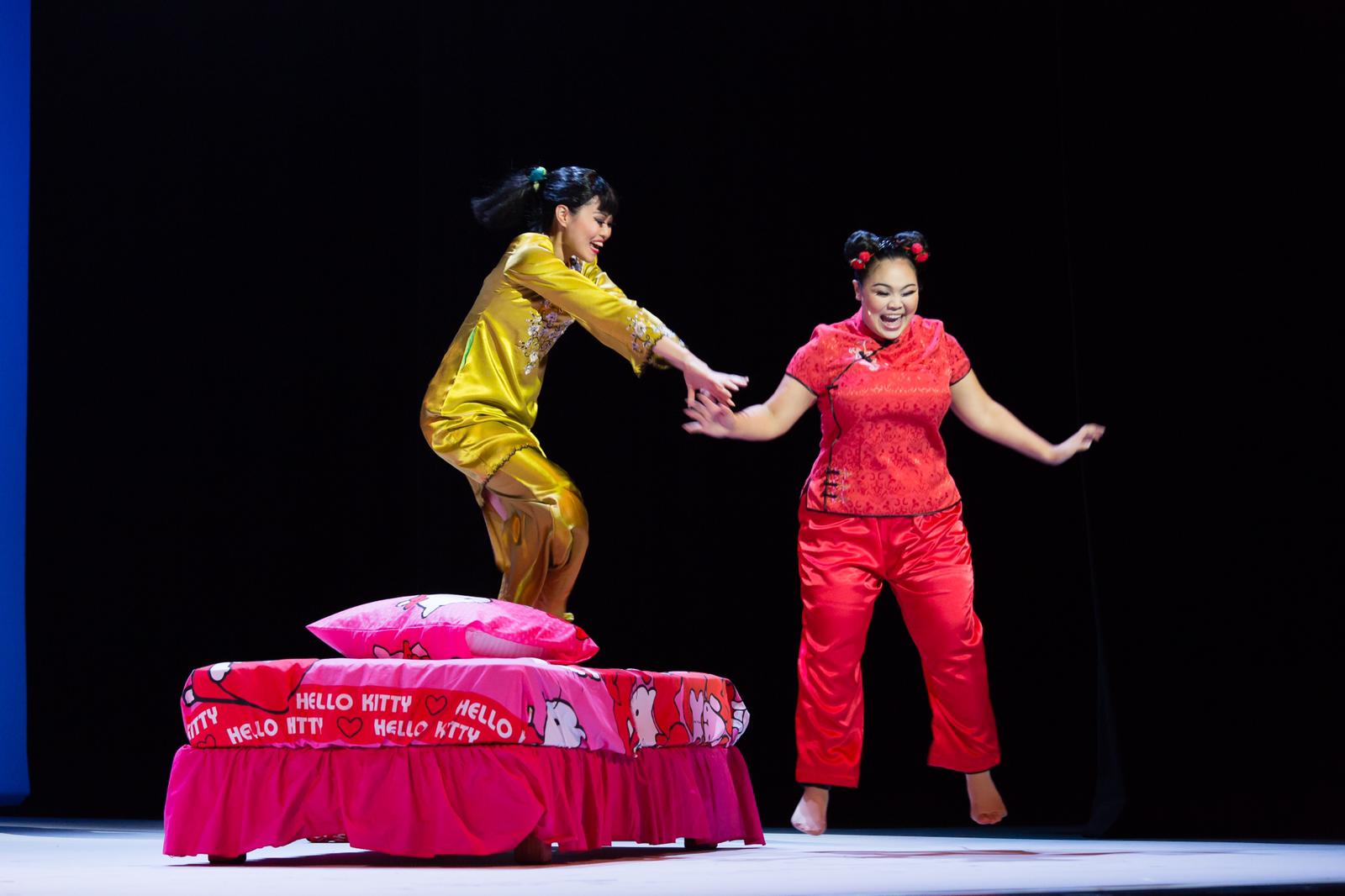 Perhaps it is in one of our favourite scenes that we felt once and for all the power of a performance from two of the very best actresses working in local theatre today; here, Meenah and Cheenah each perform a dance that best defines their respective stereotype, as Judee went full techno and Para Para Sakura, giving it her all as she went wild in typical ‘cheena’ style, while Siti channeled Queen Beyoncé herself as she posed and strutted with full confidence, completely committed to her role. The sheer commitment to character work and professionalism displayed by Siti and Judee onstage was testament to the honesty and heart pouring forth from both of them at every moment and their unparalleled skills as seasoned performers and comediennes.

Ultimately, even amidst the rambunctious sketches, Meenah and Cheenah is a show that’s firmly about the importance of co-existence and cultural exchange. It sets a useful precedence on the basis of comedy that race isn’t a taboo topic to discuss openly, one that theatre itself allows audiences to encounter in a safe space, simultaneously educating and entertaining. With Meenah and Cheenah, Dream Academy has crafted a show that’s full of heart, full of laughs and quintessentially, absolutely Singaporean. Who run the world? The answer is clear: One Meenah, One Cheenah, One Singapore.

Want to win yourself tickets to catch Siti Khalijah and Judee Tan hamming it up and nailing punchlines as Meenah and Cheenah? We’re giving away tickets to catch this riot of a show. All you have to do is tag 2 friends and comment on our Instagram post with the answer to:

“Tell us about an experience where you discovered something new about another person’s culture.”

0 comments on “Review: Meenah and Cheenah (Rerun) by Dream Academy”