KUALA LUMPUR – Last weekend, we travelled up to Five Arts Centre, Kuala Lumpur, Malaysia, to catch the cross-Causeway double bill presentation Are You Game, Sau(dara)? Comprising two brand new works created in response to Malaysian playwright Leow Puay Tin’s seminal play 3 Children, we sat down with creators Fasyali Fadzly and Soultari Amin Farid, as well as dramaturg Grace Lee-Khoo, before we caught the show to find out a little more about the show. 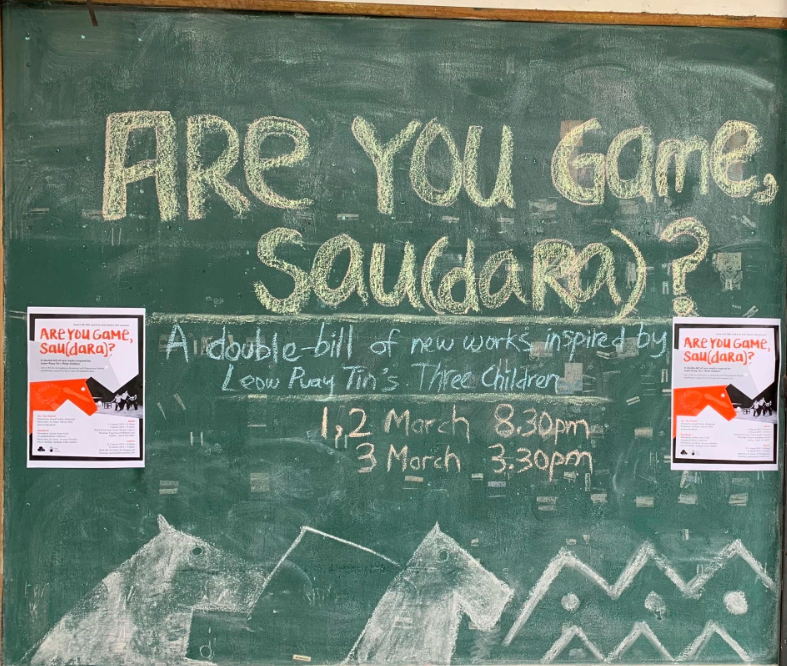 Produced in collaboration with Singapore’s Centre 42 and Malaysia’s Five Arts Centre, Are You Game, Sau(dara)? sees the presentation of Fasyali’s Are You Game? and Amin’s Sau(dara) (previously presented as work-in-progress as part of Centre 42’s The Vault), the former a series of ‘games’ the cast plays with the audience in teasing out the greater themes in 3 Children, while the latter is an exploration of those themes as interpreted and interwoven with the personal stories of four young Malay, female artists.

On the origins of the production Fasyali explains: “When I first read 3 Children, I found it so dark, yet there was this strong personal connection to it and it still retained so many elements of play, like the masak masak games they played. I wanted to bring that out in my pieces, and did research on board games, tabletop RPGs and other types of games. I wanted to create an immersive theatrical element to it, and once I got my actors in, we built on this initial idea together to figure out how best to tackle the text.”

On the collaboration, Amin says: “Fasyali and I have had many long sharing sessions over kopi at mamaks here in Malaysia, sharing our practices and thoughts given this platform. It’s resonated really well so far, and I’m getting a better sense of alternative ways of showing things and bringing out voices often underrepresented in society. A lot of our thoughts keep surrounding how we can keep improving and exploring the play, and it matters that we’re given the time and space to fail and start again until we eventually fly.”

Says Grace Lee-Khoo, dramaturg for Sau(dara): “There’s a beauty and endurance to 3 Children that opens up the potential for audiences and collaborators to dig deep, make mistakes, and realise the universality of certain experiences. While in Sau(dara), none of the four performers have actually been trained in theatre, but the production has space for each of them to explore their talents, and utilise the theatrical medium to experiment with those skills. For me, it was important for the actors to become their own dramaturgs as they tried to locate the sense of themselves within the work, and constantly ensure the evoking of Puay Tin’s themes of work, entrapment, confrontation and ultimately, a desire for liberation.”

On the process of creating Sau(dara), Amin says: “Sometimes, I wondered how I as a man was allowed to lead these four girls in this performance. I realised eventually, I’d have to share my own vulnerabilities with them in order to let them be comfortable enough to share their own. Growing up as an effeminate boy was tough for me, and that proved to be the entry point for them to join in the conversation. When I see Sau(dara) being performed, it’s not just an echo of their lives, it’s an echo and reflection of mine too, as I think about me not performing ‘accordingly’ as a Malay man, and think too about the expectations that each of the girls have to live up to as well.”

Adds Amin: “Sau(dara) has evolved a lot since we presented it in October last year. For one thing, we’re transplanting it to a black box setting now compared to last year’s outdoor facade at Centre 42. It’s also a lot more distilled now, with more intimate stories Grace has helped fish out, providing the context that helped bring out more intersectional themes of gender and race, and to bring out more of my cast’s individual skills in music and dance. It’s been such an educational process for the actresses as they’ve learn to love and support each other and ideas.”

Adds Fasyali: “Amin was telling be about his research process and his focus on ideas of being a minority as a Malay in Singapore, and I was quite impressed with how he teased out such ideas from the play. Watching Amin’s actors inspired me to want to do something unusual and fresh with my work. But my actors are all professionals, so instead, I told them that we’ll go beyond acting to focus instead on the actors’ own words. Five Arts Centre, after all, has always been about doing experimental work, and I saw this as an opportunity to get out there and do something different, break the mould and do what I want.”

He adds: “I thought a lot about issues of family, society and poverty. I live in this society, away from the kampung, always hearing stories of families who never had enough to eat, needing to borrow money from others…poverty is not a new issue in Malaysia, and being in KL, you really see more pronounced differences between the rich and the urban poor.”

On the position Five Arts Centre occupies in Malaysia, Fasyali explains: “Five Arts has been around for so long. I’m from the second wave of artists, and now having grown up, teach the younger students. It’s growing, but at a slow pace; hopefully that changes a bit with a little more government support. It’s always been very ground-up, and has always provided the platform for young emerging artists gathering to do things together and grow together.”

He adds: “Honestly, being an artist in Malaysia is all about passion and hard work. I work a 9-5 job, so I can only do rehearsals at night. But I think what Five Arts is doing is so important as it continues to expand audiences and let new people know all about our scene by presenting the work regionally, and hopefully, that will help expand the art scene as well. Now, in bringing the play to Singapore, I don’t want to change anything, because I’m curious how the locals will receive it as it is, whether they like it or not, and see how they choose to perceive these issues of race, religion and more as I chose to interpret it.”

Amin concludes: “Malays being minorities in Singapore, I wanted to give them a voice to be heard and empower them. Being here at Five Arts Centre, there’s this convergence of Singapore and Malaysia, with people coming to and from the Causeway to work together post separation. You realise we still want to have that link with each other, with experiences that actually aren’t that far apart. We’re both multicultural nations, and when I walk around Five Arts, I can’t help but feel happy looking at all these posters of various cross-border works over the years, telling and retelling our stories over and over again.”

Are You Game, Sau(dara)? travels back to  Singapore from 8th to 10th March 2019 and plays at the Centre 42 Black Box. Tickets available from Peatix