School is a tragedy. Specifically in Cake’s case, it’s a Greek tragedy. Opening the Esplanade’s 2019 season of The Studios, Cake presents Rubber Girl on the Loose, a brand new adaptation and reinterpretation of Sophocles’s Antigone, except this time, set within the tyranny of a formal education system. The titular ‘rubber girl’ is of course, Antigone, wearing rubber bands all over her body and refusing to bend to principal Creon’s iron fist he rules the school with. Following closely with the original tale, Rubber Girl on the Loose follows Antigone (Sarah Chaffey) as she attempts to secure a proper burial for her brother Polyneices. When king (principal) Creon decrees that Polyneices is not to be buried or mourned, Antigone defies him outright, and faces the resulting punishment that besets her.

Cake has always focused on strong production quality combined with what is often an abstract script. While Rubber Girl on the Loose felt lengthy in its execution to drive home a message that was clear by the end of the first hour, what keeps audiences watching is the attention to symbolism and arresting physical theatre skills displayed (even if there are times it does border on gratuitous). There are plenty of visual elements fighting for attention in this production – Genevieve Chua’s skatepark-like set suggests a world that lives on the very fringes of rules, with performer Tia Andrea Guttensohn emerging in her skates navigating the obstacles, possibly metaphors for the many trials and tribulations any and every country faces. The student body is dressed in uniforms complete with name tags (designed by Aida Dolrahim), immediately suggesting their conformity to rules and regulations, and the tight hold academic authority has over them all in even holding on to their identities. 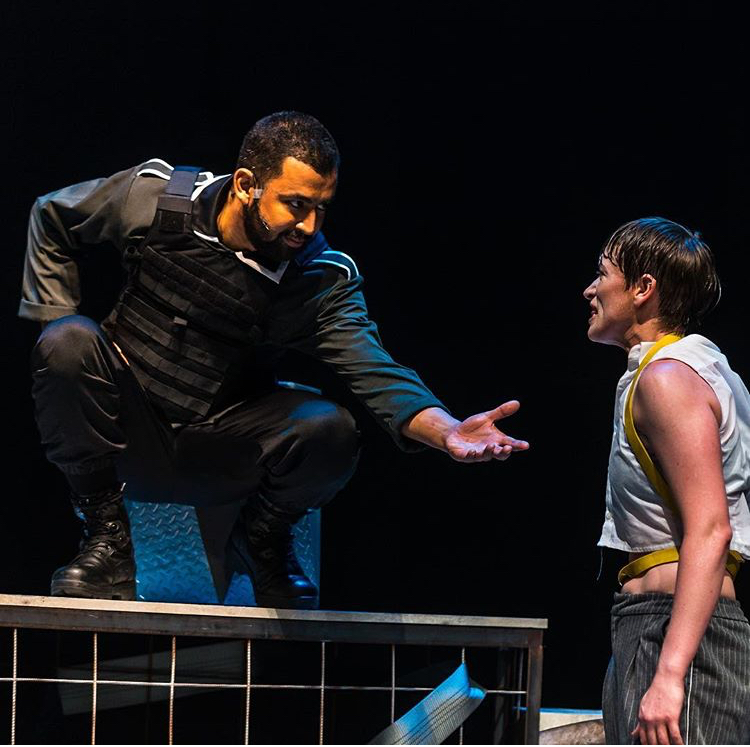 With the setting swapped to a school, Cake’s version clearly places on emphasis on the issues of rules and rule-breaking, and the heavy weight of the crown upon whose head it sits. The true tragedy that Cake evokes from Rubber Girl on the Loose is that of the pitfalls of power and leadership, and how far too often, the belief that one can change the system, given the right position, is but a trap. Creon, in having wanted to change the system for the better, only ends up enforcing and entrenching it further once he takes on the role of principal.

As Antigone, dancer Sarah Chaffey moves with lithe steps across the stage, her physicality elastic, sleek, and ready to bounce back from literally anything and everything, as her title of ‘rubber girl’ suggests. Creon, played simultaneously by actor Ghafir Akbar, dancer Darlane Litaay and drummer Matthias Engler, feels menacingly authoritative in the way he skulks the school halls, threatening and dictator-like as three men, each projecting an extremity of his character, with Ghafir speaking his lines while Brian Gothong Tan’s live projection emphasise the authority, and Darlane using his physicality to silently speak to Antigone through dance (impressive but unfortunately underutilised and drowned out by the other visual elements). Of the three, it is Matthias in particular whose deafening drumbeats take centrestage as he drowns out Antigone with every beat, and provides the eerie live soundscape crafted with unusual objects as ‘instruments’, from alphabet blocks creating different sounds with each one he hit (like an alternative drumset), or producing a screeching noise as he rubs a metallic object, or even creating the sound of birds chirping, rather ingeniously, from allowing the air from a balloon to escape. 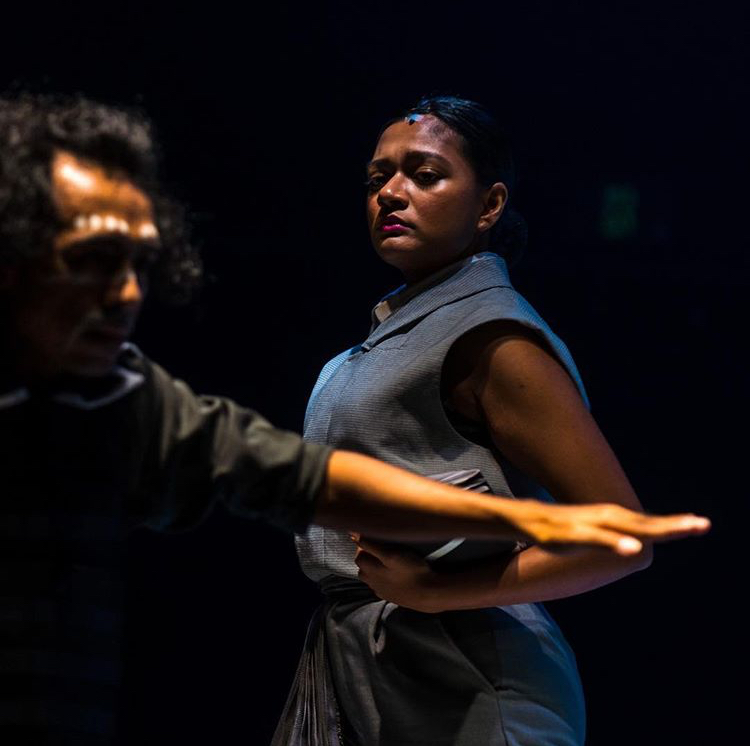 The kingdom of Thebes is completely helpless, each one wrapped up in their own powerlessness or powerlust, from a kindly teacher (Masturah Oli) who has no agency to create any change, to a head boy (Andrew Marko), fawning and pandering to Creon, w as he wields similar drumsticks to the ones Creon uses, as a symbol of his power within the student body. As Creon’s wife, Amy J Cheng dons a blue dress and gloves, identical to Melania Trump’s outfit at the POTUS inauguration, immediately bringing to mind parallels of fanatical rule and corrupt/incompetent leadership. The examiner and marker of papers, her role is judgmental, holding complete power to make or break a student. Antigone’s brother Polyneices (Nicholas Tee) lies naked and dead onstage in front of us, his presence clearly seen, felt, and discomforting in his bare, cold existence. 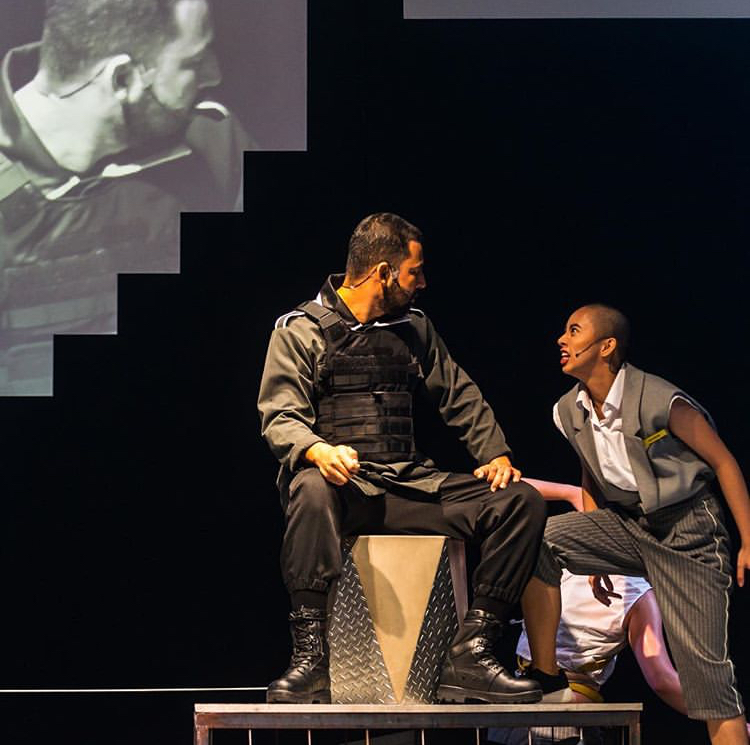 There is a sense however, that it is all this chaos, corruption and irresponsible power that results in inevitable tragedy. In listening to blind prophet Tireisias onscreen (Claire Teo), Creon becomes agitated knowing that she is never wrong, and begins to fear his downfall and the collapse of the kingdom, pushing him ever closer to completing the self-fulfilling prophecy. When Creon’s son and Antigone’s confidant, cousin-fiancé Haemon’s eventually commits suicide (played gender-blind by Mikaela Perez) upon hearing of Antigone’s death, the scene repeats itself over and over again, as if to emphasise that this was fate itself, and nothing would ever change it. Amy Cheng’s character sees this, and herself commits suicide, adding to the trail of blood and death left behind, leading to Creon finally coming to his senses, realizing that the ‘order’ that he has constructed for himself is fragile, maintained only by an iron fist and debilitating rules that takes no prisoners. But even as he abdicates, it is Andrew Marko that moves to fill his position, suggesting that cycles of corruption are entrenched, that tragedy can and will repeat itself, hydra-like as one corrupt leader is simply replaced by another one, unless the system itself is crushed. 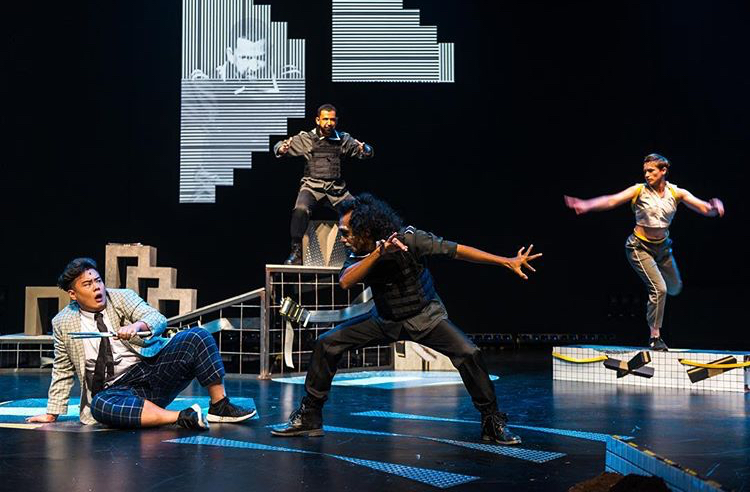 Mighty in ambition, Cake has delivered an accessible version of a classic Greek text that feels relevant again as it makes sharp comment on the nature of power and the difficulty of change. Director and playwright Natalie Henendige continues to display her bravery at reappropriating these Greek plays for modern, contemporary society, adding an edge of that hallucinogenic-laced Cake treatment to produce a work that leaves us with the message to confront fear head on, ready to get back up if ever struck down, in the hope that our efforts eventually, somehow, cause a change for the better, and break the cycle of tragedy.

Rubber Girl On The Loose played at the Esplanade Theatre Studio from 28th to 31st March 2019.

0 comments on “The Studios 2019: Rubber Girl On The Loose by Cake Theatrical Productions (Review)”