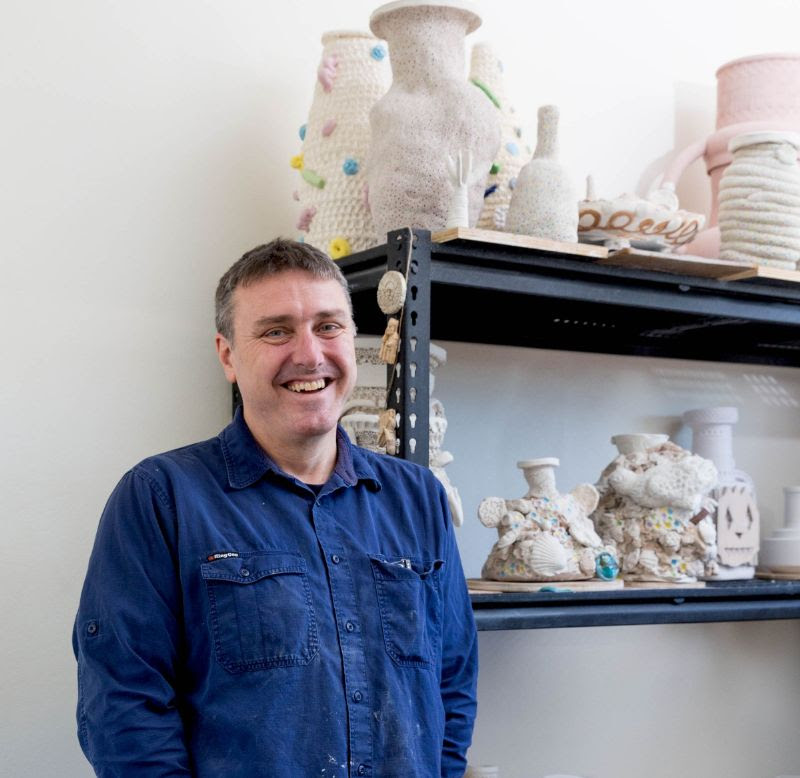 In his work, Sydney and Berry NSW-based artist Glenn Barkley often draws upon the history of ceramics, popular song, the garden and conversations about art and the internet. doyouremembermylove is Glenn Barkley’s first solo exhibition in Singapore featuring new ceramics and collages that, amongst other things, have a relationship to the Tang dynasty ceramics collection of the Asian Civilizations Museum. These new works ponder upon the ancient Chinese pots, the fall of Singapore, pop and classical music, modernist poetry and Singapore’s role in recent Australian history – albeit being obfuscated by nationalism and a reductionist reading of history.

The large pot herethetimeflies (2019) incorporates texts from Singaporean Modernist poet Teo Poh Leng’s book-length F.M.S.R. which was published in the UK in the 1930s. The pot takes the point of view of a sailor sinking to the bottom of the sea and glimpsing visions of the end of empire amongst the dappled light and shiny shells. Employing straight-forward coiling and other hand-building methods, Barkley’s use of words in his pots and collages often reference popular songs and poetry, with the intentional removal of spacing between them that corresponds to hashtags.

The title of the exhibition comes from the song Sea of Love, first written and recorded by Phil Phillips in 1959 and later recorded by The Honeydrippers in 1984, the latter version first heard by the artist in his youth. Barkley imagines the song as a mirror to the shell, coral and poetic motifs that decorate the pots and collages in the show. “I imagine this as a song someone may have sung to their sweetheart before departing for or upon returning from war.”