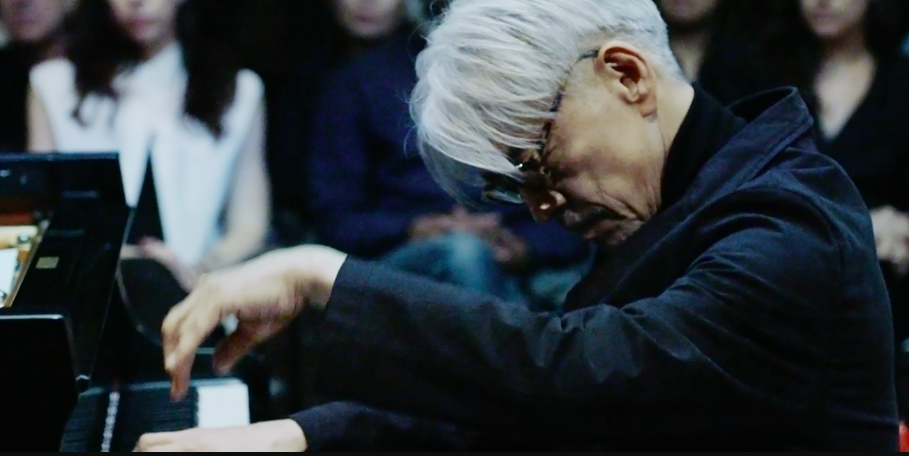 A transcendent performance brilliantly portraying the struggle of art and life.

Nobody ever said creating art was easy. But perhaps few people know it quite as well as living legend and composer Ryuichi Sakamoto, who had an eight year gap between his latest solo album async (2017) and Out of Noise (2009), during which he struggled to find inspiration. In that time, Sakamoto was also diagnosed with throat cancer, forcing him to take a break from his music until he recovered in 2015, amidst growing apocalyptic fears from the rise in natural disasters such as tsunamis and earthquakes, naturally instilling a greater awareness of mortality and the temporal nature of life in him.

In a way then, Fragments, Sakamoto’s one night only, deeply intimate musical showcase, could be interpreted as representing that artist’s creative struggle when everything seems to be working against him, marred and distracted by fears of death and the sheer absurdity of life. Performed at the Esplanade Theatre with audiences seated onstage, Fragments utilises visual artist Shiro Takatani’s set for ST/LL, with a range of instruments and musical paraphernalia arranged around the shallow pool of water, seemingly floating, while a tall white screen looms behind. The still, reflective nature of the water suggests something cerebral, spiritual, and in essence, positions the surreal set as a manifestation of Sakamoto’s mind. 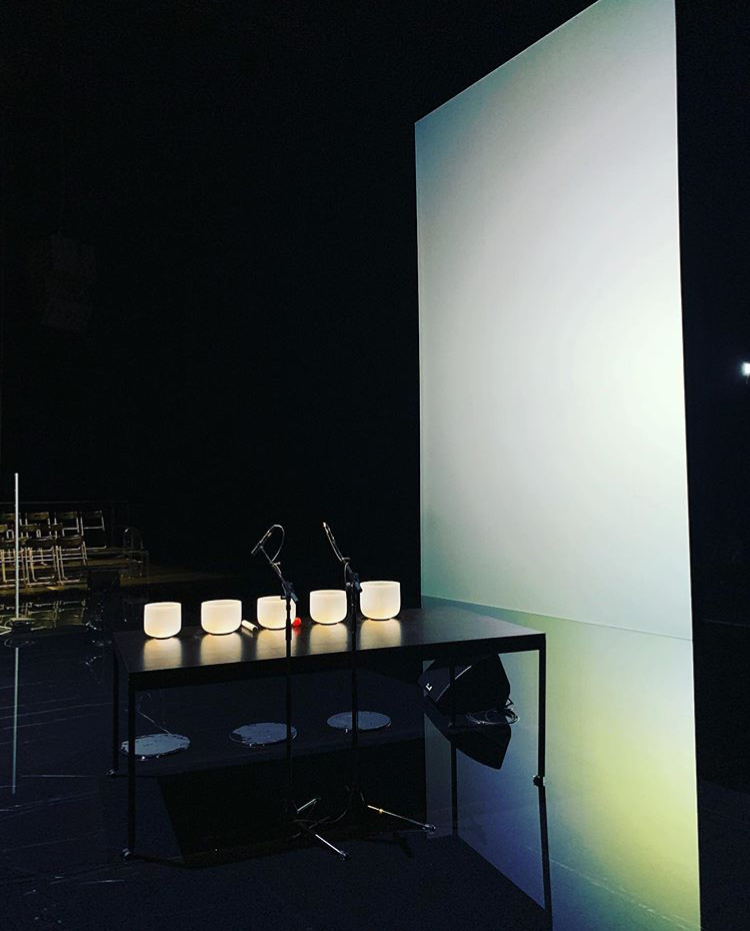 Walking out dressed completely in black, the audience holds their breath as he comes onstage, every step he makes deliberate, each moment punctuated by a single ripple in the water. To call what follows a concert would not be sufficient to describe the magnificence and beauty of the experience – it is a work of art itself, as Sakamoto creates ringing noises by stroking a series of lighted receptacles, and the screen fades to black, an undefinable mass of white pixels energetically pulsating like a digital blizzard, or an army of angry gnats. This is the white noise that surrounds us constantly, and Sakamoto, in all his power, is here to tame it, shape it, and mould that noise into a symphony of his own creation. 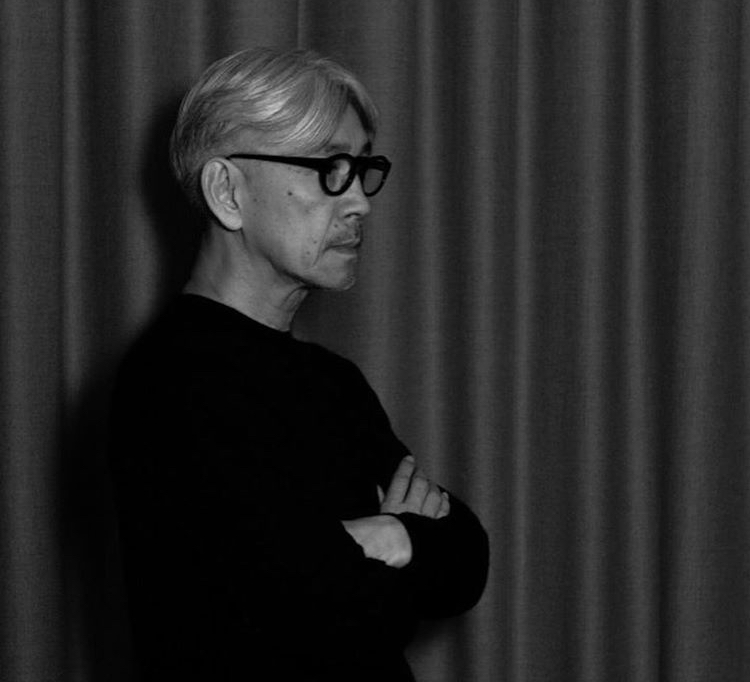 Over the next 75 minutes, we listen to tracks from async, performed via a combination of recorded sounds and Sakamoto’s own playing when he sits at the piano. Each time he presses the keys, there is a melancholia that characterises it, adding only to the ominous, discomforting nature of the songs, simply because of their “asynchronization”, the sounds coming together but never creating a perfect harmony. He does not play the piano for too long – from time to time, he pauses, experiments with unusual sounds, from dropping coins to the crumpling of paper, the latter perhaps symbolising his composer’s block. He lets the samples play while he gets up, toying with the other instruments around, an electric bass that yelps or a clear barrier from which he produces rhythmic knocking sounds, deliberately making these just a little too loud, jarring, or uncomfortable to listen to, while he ponders, perhaps worrying whether any of this will result in something of significance. Always, he is trying to find a means of teasing out the unexpected symphonies hidden within it, and arranging, conducting them into a cohesive, yet wildly innovative whole. 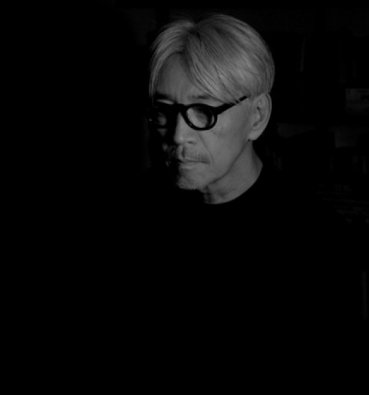 Onscreen, we see projections of moments in nature from collaborator Shiro Takatani, from the forest featured in CODA (the 2018 documentary surrounding Sakamoto) to a monochromatic vision of a lake in front of mountains. From time to time, a live video feed of Sakamoto is overlain onto these images, melding the two visuals together, and associating Sakamoto with nature itself. Always, there is something amiss, from lines fading into a blur that corrupts the image, or a ray of light that repeatedly travels across the screen, casting a faint glow over Sakamoto in real life. We think of the distractions that plague him, the snatches of inspiration that fall just short of his grasp, almost reaching it but not quite, and feel his struggle to be at ease with all of this, and find a throughline to cut through the noise, and the energy required to somehow get through these trials and make something. 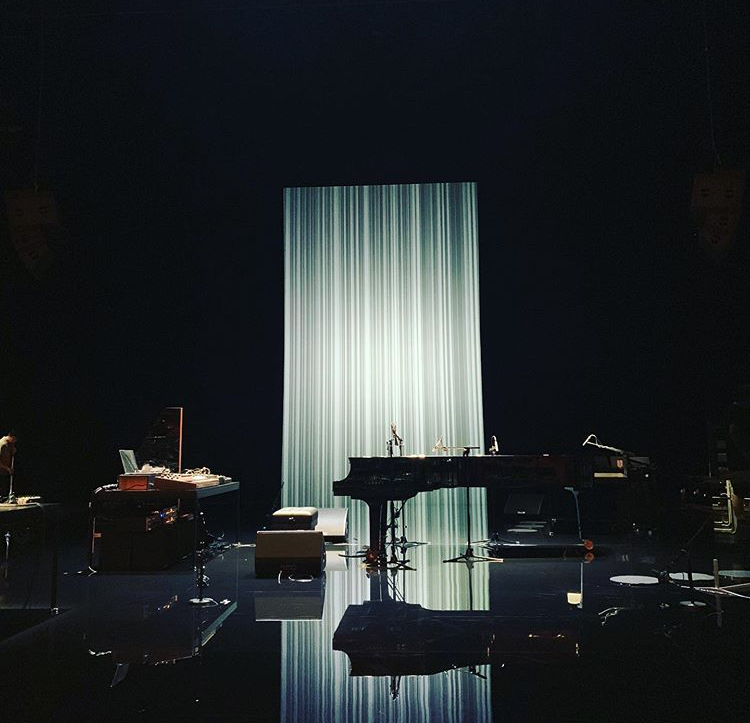 Things comes to a head when he reaches the track fullmoon, featuring samples from David Sylvain, Paul Bowles and others, as they speak of the failure of memory, the passage of time, and suggests ultimately, the inevitability of our mortality. These come together in a flood of voices, each trying to drown the other out while onscreen, we see these manifest as words imprinted onto the forest. Amidst it all, Sakamoto plays a single sustained note, holding it, as if it were a flatline for a heart rate monitor, straining to be heard above the voices, before suddenly, silence.

Yet, this is not the end – Sakamoto is not defeated, but finds strength from this, the image onscreen now a calm blue sky as he picks up the pieces, as if reborn. At the piano, he plays a note, then another, and before we know it, it finds a sound and becomes music. Like async itself, Fragments showcases the attempt to use methods as far ranging as quantum physics and chaos theory to make sense of the pain, the disruptions and the noise we face each and every day in our lives, and taking control of it with music, and transmuting it into something completely new. It’s not an easy journey by any means, but under Sakamoto and Takatani’s combined vision, it’s a transcendent experience that makes us believe in the power of art, and feel nothing less than blessed to have witnessed this unparalleled work of staggering genius.

Ryuichi Sakamoto – Fragments played on 28th May 2019 at the Esplanade Theatre.