This June, Asia’s leading integrated resort Marina Bay Sands is about to roll out the red carpet for the top restauranteurs of the world as they take on the role of official venue partner of The World’s 50 Best Restaurants 2019. Marking its first Asian stop in Singapore, the prestigious culinary ranking and awards will see the most distinguished culinary names take centrestage from 22nd to 26th June 2019, including the highly anticipated awards night at the Sands Theatre on 25th June. In addition, Marina Bay Sands’ celebrity chef and signature restaurants will be holding a series of special collaborations specially for the occasion.

Experience the brilliance of chef Tetsuya Wakuda and the progressive cuisine of chef José Andrés as the two culinary maestros jointly present a four-hands lunch on 23rd June at Waku Ghin. Winner of the ‘American Express Icon Award’ by The World’s 50 Best Restaurants 2019, and named one of the world’s most influential people by Time Magazine, chef Andrés is an internationally-recognized culinary innovator best known for his avant-garde cuisine and diverse gastronomic repertoire. Meanwhile, chef Wakuda of Waku Ghin has been recognized as one of Japan’s Masters of Cuisine, and stays true to his philosophy of simple and honest cooking using unadorned techniques.

CUT by Wolfgang Puck will be teaming up with award-winning Mexican restaurant Quintonil to present a bespoke menu on 23rd June. A modern restaurant which prides itself in serving authentic Mexican cuisine, Quintonil has been bestowed with some of the world’s most coveted culinary awards, including a No.11 ranking in The World’s 50 Best Restaurants 2018. CUT’s chef de cuisine, Brandon Galitz, will be joined by chef-owner Jorge Vallejo of Quintonil to unveil an unforgettable gastronomic experience. Diners can opt to elevate the experience with a wine pairing menu.

Mixology wizards Chew Qing Ting from Origin Bar and Jon Lee from Singapore’s Tippling Club will join hands with Bread Street Kitchen’s head bartender Vojtech Bazant to present a one-night only bar showcase. All three mixologists were recently crowned top three winners at the Mediterranean Inspirations Singapore competition organized by Gin Mare, and will present their award-winning cocktails, each priced at S$19++. Guests can look forward to Vojtech’s winning creation, the Sundaze – a relaxing tipple reminiscent of glistening sun rays on the Mediterranean sea, boasting notes of fresh pomegranate, thyme, and rosé. The restaurant will also be serving signature bar snacks such as the pork fennel flatbread, salmon ceviche, and pork belly sliders for pairing with the delicious cocktails, which will be available for a week until 30 June.

On 24th June, excite your palate with a vibrant feast at Spago by Wolfgang Puck as part of The World’s 50 Best Restaurants 2019 festivities. Chef de cuisine Greg Bess of Spago by Wolfgang Puck and executive chef Tim Butler of Eat Me, a sleek, modern fusion restaurant celebrated for its bold and innovative cuisine, will jointly present an exclusive menu enhanced with bespoke Gin Mare cocktails. Guests can also stop by the stylish Spago bar and lounge for more Gin Mare tipples by Eat Me’s Head Bartender Buntanes “Pop” Direkrittikul to cap a perfect night. 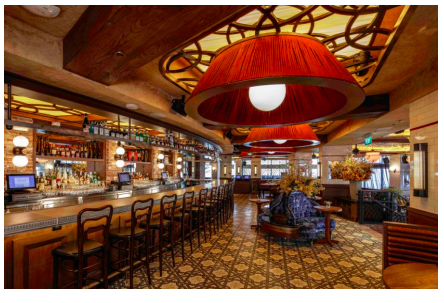 Contemporary Italian-American restaurant LAVO will play host to three international award-winning mixologists for an exclusive bar takeover on 24th June. Andrew Loudon, head bartender from Tippling Club and newly crowned Singapore winner of the The Dalmore Decadent Digestif cocktail competition 2019, will share the stage with two other winners of the same competition in the UK and France respectively – Giovanni Bruno from The Blue Bar at the Berkeley Hotel, and Francois Xavier from the Ritz, Paris – to showcase their unique creations. Each prized concoction is S$18++.

Chef Daniel Boulud’s db Bistro & Oyster Bar will present one of its signature whisky pairing dinners with renowned Scottish distillery, The Dalmore on 26th June. The dinner will commence with a toast over the prized Dalmore King Alexander III, followed by a five-course pairing menu featuring the restaurant’s signature seafood and soulful dishes prepared using classic French techniques. Guests can enjoy the star of the dinner – a main of Maple Leaf Farms duck trio, with the widely-lauded Dalmore Cigar Malt, a luscious gem of a whisky that combines notes of sweet butter and toffee with rushes of smokiness and spice. Stephen Martin, global whisky specialist from Whyte and Mackay, will also make a special guest appearance to journey guests through the world of whisky.