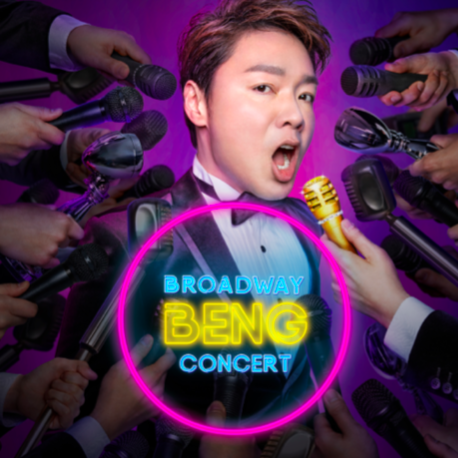 Absent from our stages for far too long, at long last, everyone’s favourite musical  number-spouting performer is back, as Broadway Beng returns to the stage this July! Presented by Dream Academy and directed by Selena Tan, come meet the man with the ‘license to thrill’, as Sebastian Tan reprises the iconic character in Broadway Beng Concert: Last Beng Standing. Armed with a super-strength vibrato and ‘sibei yan dao’ good looks,  Broadway Beng is is fitter than ever, funnier than ever, and ready to show you a Fukien great time.

Bringing on his signature East- meets-West brand of Hokkien humour, watch as Broadway Beng hilariously brings to life his interpretation of Broadway and West End favourites, such as The Phantom of the “Chinese” Opera, the off-off-of Broadway hit musical, A LAD DIDN’T, The Anti-Bicentennial Beng Tale of the Forgotten Farquhar, the World Premiere of the New-BOND musical, complete with his Re-BOND Hair Girls, lots of rousing Broadway anthems, and of course, plus your favourite Jin Cham heart-wrenching Hokkien ballads.

Election season is already being predicted, and Broadway Beng will even be sounding out his rallying call to educate and inform as we cast our vote for our future, singing to us about the tried and tested classic, Greased Lightning, or turning to the constant pounding of the Sledgehammer, or perhaps even asking ‘do we hear the people sing’ with the recently sprouted Tie a Yellow Ribbon Around the Old “Palm” Tree.

Broadway Beng won’t be alone in his journey though, as he will be joined by his Gold-Tie (pronounced as “Getai”) musicians and three brand new Chio Buus, Tia Andrea “the kantang”  Guttensohn, Stephanie “kohlian” Sim, and Inch “siginna” Chua. Nobody does Broadway quite like Broadway Beng, and as he steps into the role and becomes your New-Bond, The Beng with the Golden Mic, and the Last Beng Standing with this glorious comeback.