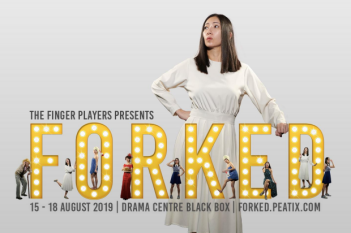 We first saw Jo Tan’s Forked when it premiered at the 2018 M1 Singapore Fringe Festival. Now, with further developments under The Finger Players’ Watch This Space playwright incubation programme, she’s back with a brand new version of the comedy-drama this August!

Directed by Chong Tze Chien, Forked is veteran actress Jo Tan’s first full length play as an emerging playwright. First written under a six-week writers programme under Checkpoint Theatre, it was then performed as China Wine, as part of Saga Seeds Theatre’s Seed Incubator Readings, before being staged at the M1 Singapore Fringe. But while that version saw a cast of five actors performing it, this brand new version takes it down a notch with a lot more intimate – as a light-hearted and heartwarming monologue starring Jo herself. Says director Chong: “[Forked] is a coming-of-age story I think many people can relate to, and a testament to the industry’s contribution to nurturing new talent. I feel that it is not just the work of The Finger Players, but it is also everyone else’s work.” 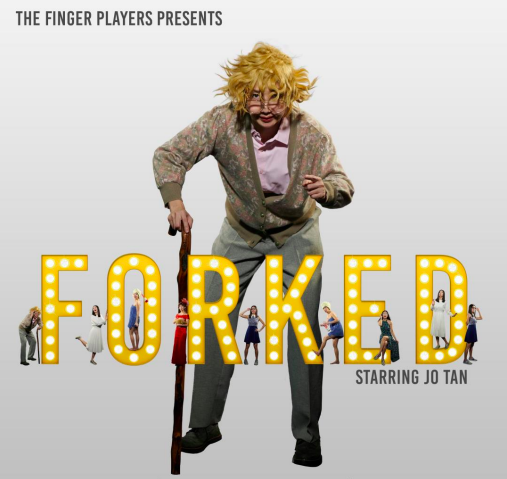 Inspired by personal stories and real life encounters, Forked follows Jeanette Peh—a highly-westernised Singaporean JC valedictorian— as she abandons law school to follow her dreams of studying acting in London. On arrival however, she is dismayed to find that her teacher and classmates label as one of the “Asian students”. Adopting a British accent and well-meaningly correcting the British students’ grammar, she finds herself even more alienated than before…until she gets to Baptiste Laroche’s class. Monsieur Laroche wants her to perform more honestly by speaking in her native language, except…Jeanette is beginning to realise she doesn’t know what her native language is, let alone who she is at all.

Besides director Chong and actress/playwright Tan, the creative team comprises seasoned set designer Chan Silei, as well as award-winning sound artists – composer Darren Ng and lighting designer Lim Woan Wen, both of whom are familiar faces in any The Finger Players shows since 2004. Has Forked made leaps and bounds since 2018? We’re certainly interested to see what happens when this script is put through Chong Tze-Chien’s guidance, and how Jo makes it all the more personal as a one-woman monologue. Coupled with The Finger Players’ unique aesthetics, and Forked is sure to surprise and move when it premieres at the Drama Centre Black Box this August.