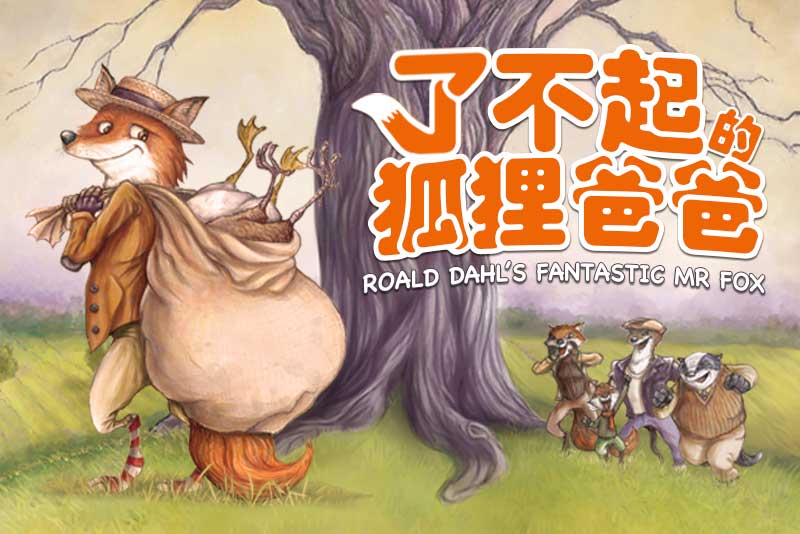 Put together a crew of winsome animal protagonists, a group of nefarious farmers and a classic tale of innocents against oppressors, and you’ve got a triumph of a show waiting for you already. But what The Little Company’s Fantastic Mr Fox does that takes it one step further is combine high production value and strong performances to produce a truly joyous work suitable for all ages.

Based off Roald Dahl’s novel of the same name, and with a script adapted by Huang Suhuai and lyrics by Ng Meixin from the original English version, the Mandarin version of Fantastic Mr Fox follows the titular Mr Fox (Vester Lim), husband to Mrs Fox (Isabella Chiam) and three fox children (Sugie Phua, Ric Liu, and Sharon Sum). Surviving on livestock and produce procured by Mr Fox as he loots them from farmers Pang Pang, Peng Peng and Bin Bin (Also Phua, Liu and Sum), it’s not long before he incurs their wrath, and a battle of wits and revenge ensues as the Fox family fights for their survival. 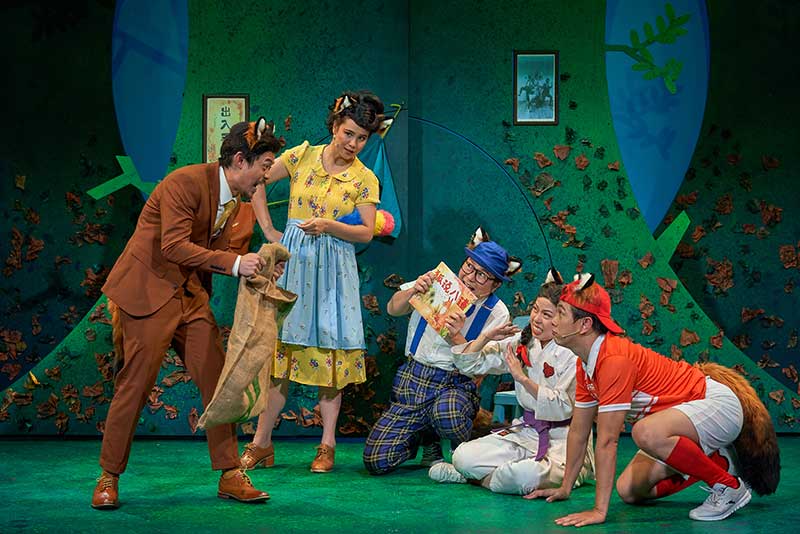 The enthralling setting of Fantastic Mr Fox already sweeps audiences up into its idyllic world from the moment narrator Juni Goh (as a bespectacled Badger) opens the show, introducing us to the English countryside landscape and our story. Smoothly transitioning from a verdant forest to a farm dripping in orange sunset, Hayley Grindle’s production design and James Tan’s lighting is a sight to behold in every scene, the set always colourful and inviting. Plenty of detail goes into every scene to make it that much more personal as well, such as a reminder to come home safe pinned up on the Fox family’s home, or the leaves plastering the set to add a sense of realness. Be sure to look out for when the Fox family arrives at the farms themselves, showcasing plenty of dedication to creative set design that encapsulates the playful nature of the show, from laser tripwires to a futuristic cider-making machines.

Even in its audience interaction segments, there is so much sincerity and commitment to their performances that one cannot help but be won over by their enthusiasm and energy and convince us all to ‘dig’ along with them, making full use of the theatre space – be sure to keep an eye out on all levels and all around you! 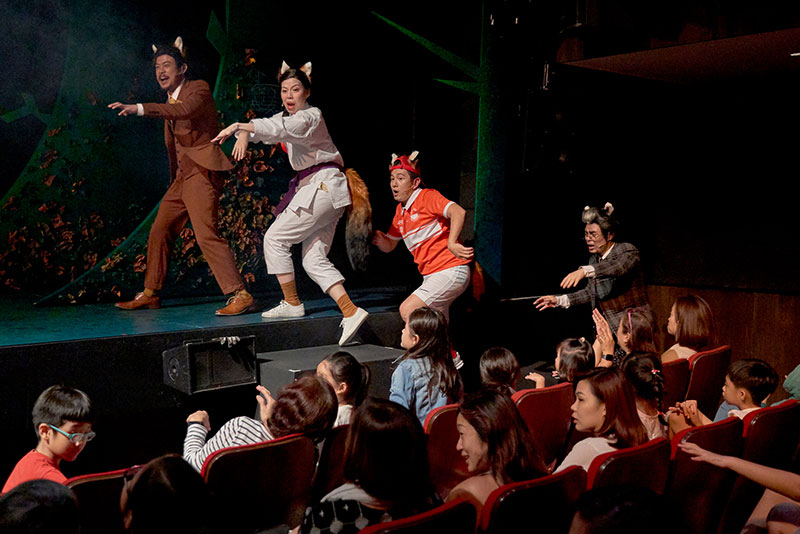 At the heart of Fantastic Mr Fox is a story about family, and this is something the cast brings out with aplomb. Each of the fox children are imbued with their own unique personalities – a bookworm, a soccer enthusiast and a martial arts student, characterised by their costumes and brought out by each actor, as they brim with child-like vigor and innocence in every scene. As Mrs Fox, Isabella Chiam brings a demure air of domesticity to her performance, and has a beautiful solo number dedicated to her concern for the family. But it is Vester Lim as Mr Fox who steals every scene he appears in, wildly energetic, always suave in his dapper brown suit, and devilishly charming. In their shared scenes, the Fox family is evidently united both in spirit and by their performers’ chemistry, and one can feel the genuine sense of familial love emanate from them. As our narrator, Juni Goh also does a great job at keeping the audience engaged throughout, even incorporating some inspired puppet work in between, while maintaining strong, precise enunciation throughout, the perfect tools for an engaging and educational children’s show. 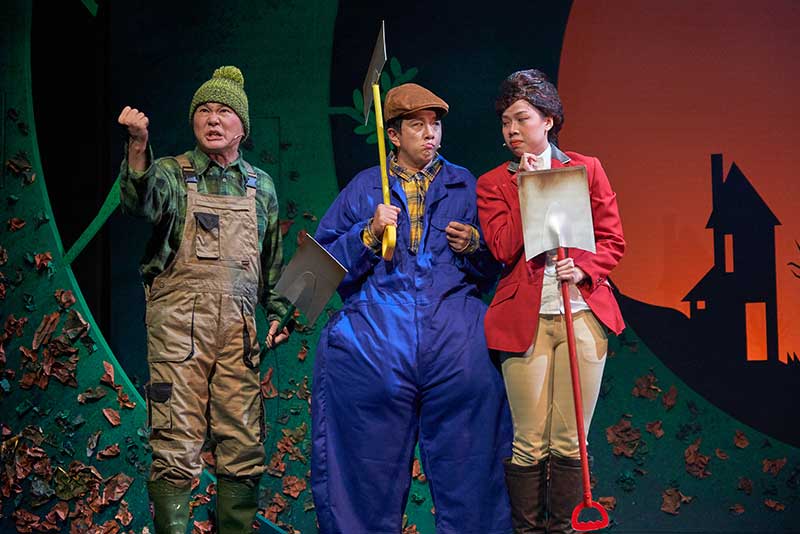 Meanwhile, as the farmers, Ric Liu, Sharon Sum and Sugie Phua are a riot to watch as they bumble about onstage like a bizarre team of supervillains, with plenty of physical humour and slips of the tongue to keep audiences amused. Sugie Phua in particular stands out, bringing the laughter easily when he steps out in a fatsuit, modulating his voice to sound more nasal and completely embodying the comedy in his physicality. It’s impressive how these three actors literally have mere seconds to change in and out of their farmer and fox child costumes when shifting characters, where one can only imagine how exhausting it is to do all this and still make it look effortless onstage. Credit is of course due to both the stagehands and stage manager for maintaining impeccable pacing and timing of the production and ensuring everything is running smoothly. 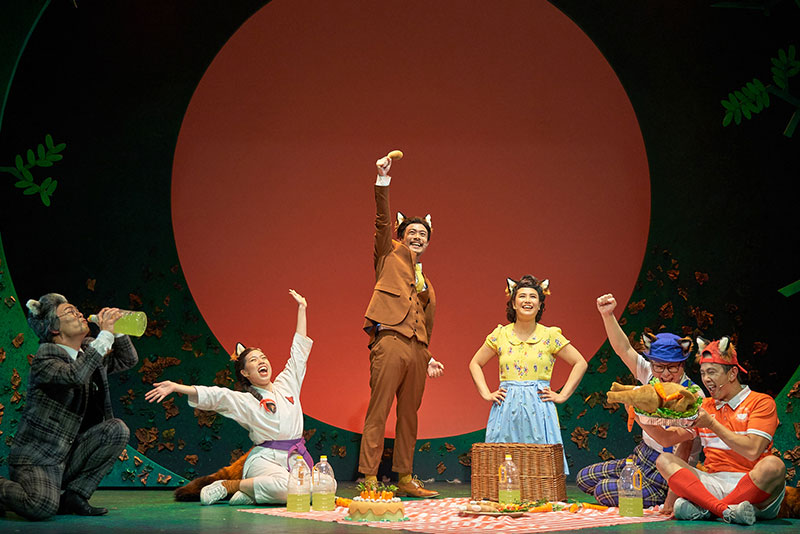 Fantastic Mr Fox is a class act and prime example of children’s theatre done well, a quality production that will appeal to all ages thanks to its lovable cast, incredible design and straight up mastery over the genre. There is so much pure imagination that goes into putting up such a stellar production, and truly, encapsulates SRT’s dedication to creating a quality work each and every time. In a word – simply fantastic.