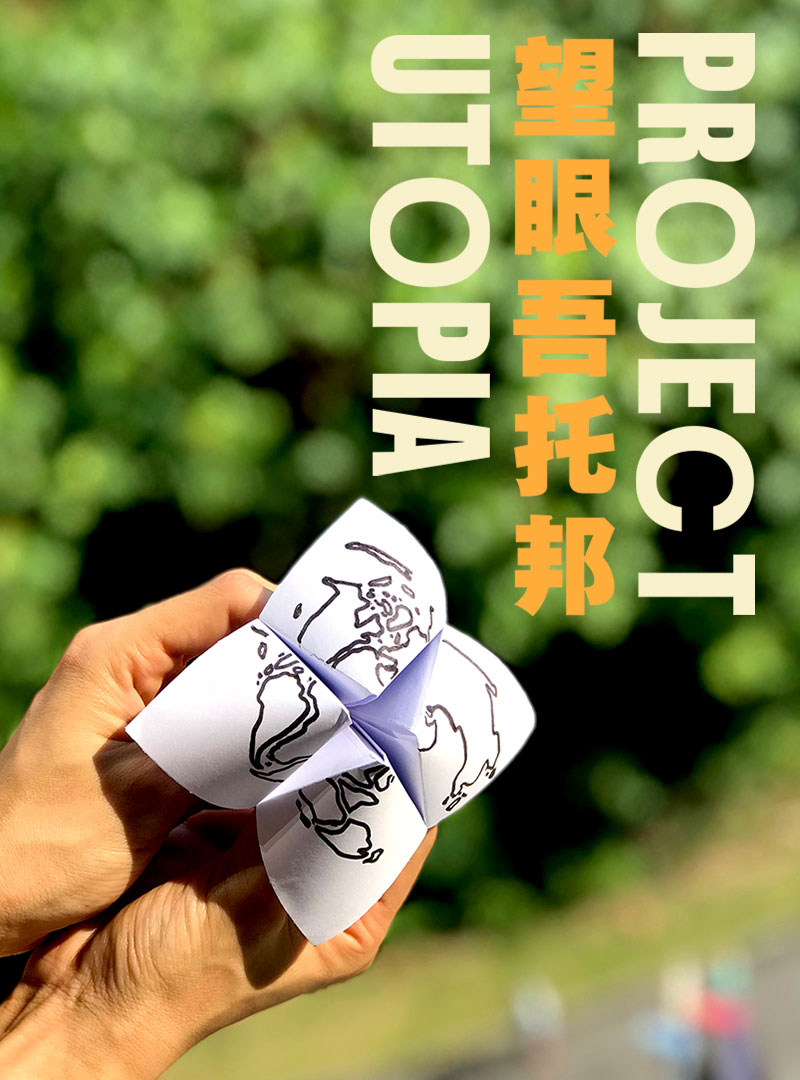 The Practice Space becomes a lab to experiment and play with the concept of ‘Utopia’.

English writer Thomas Moore was the first person to write about utopias, or an imaginary perfect world. Can such a place exist in real life, or is it doomed to forever be a land of fiction? With The Theatre Practice’s PROJECT Utopia, five international artists then come together to distil that question and explore other assumptions and issues the idea of utopia comes with into their own artistic practices.

PROJECT Utopia, as part of the M1 Patch! Festival, is rooted heavily in the idea of play and experimentation. This is a concept that already presents itself in the medium and venue of the performance, which has audience members travelling around The Theatre Practice’s building itself as they experience each work together, almost as if the entire building transforms into a different world, devoid of our real world’s rules to bring to life the artists’ utopian ideas, immersing us completely as each unique space is designed to fully integrate each piece into it.

Nowhere do we see this more than in the first work – Ming Poon’s The Pledge, where audiences are gathered on the second floor of the building and see local artist Ang Xiao Ting, Indonesian artist Dhimas Aryo Satwiko and Finnish Sini Rautjoki standing before us. The Pledge is a work that revolves around the idea of disruption – as soon as we’ve settled down comfortably into our seats, we are then called to stand up to recite the pledge. From there, the words ‘democratic’, ‘justice’, ‘equality’, ‘happiness’, ‘prosperity’ and ‘progress’ are isolated, and each word tagged to a certain movement, as demonstrated by each artist. Audience members are then given 20 minutes to freely come up to the three microphones before them, and pass commentary on any of those six words as they imagine and re-imagine these ideals intending to better society.

With the way Singaporean audiences are often terrified of coming out onstage, The Pledge runs the very real risk of having a completely silent, uncomfortable 20 minutes. Thankfully, amongst our audience, we had a number of volunteers come up and speak both simply and entire rambles on each word, allowing the performance to activate each performer as planned. Primarily, The Pledge seems intent on revealing the inherent dissatisfaction and desire for change within society through its audience interactions. Many comments centre on ideas of change or hope for better ways society can treat each other. But surprisingly, it is not so much the content of the audience reactions that matters so much as how they choose to use the open mic medium they are given. We soon learn that each performer is paired with a specific microphone, affecting the frequency with which each one moves.

Once we learn the mechanics, it’s not long before audience members decide to play with it, experimenting with whether nonsense words would also incur movement, or how removing the mics from the stands would affect it. Eventually, we end up with the mics being passed around the audience, allowing multiple people to speak at once, and we watch the performers move at the same time, interacting. In essence, The Pledge acts as a fun exercise and warm-up to the entire PROJECT Utopia, allowing audience members to get comfortable with one another and see the ‘impact’ of their words, hopeful and giving rise to the possibility of change for the better, if only we’re willing to step up to the plate and try. 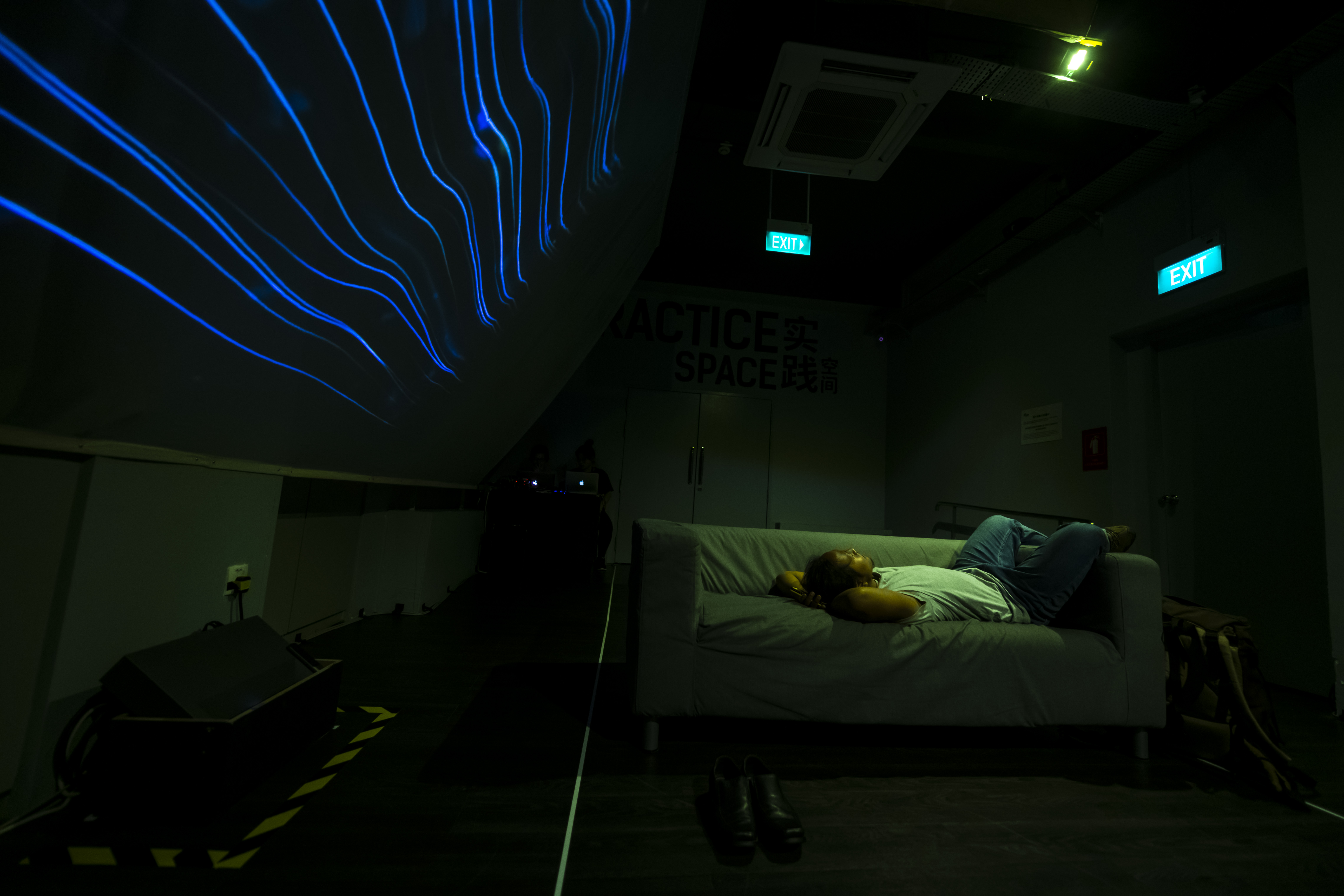 We’re then directed to travel downstairs to the foyer outside the Black Box, a lengthy corridor-like space where we see Dhimas lying on a couch. Here, he performs The Forgotten Ones of Omelas, based upon the costs of utopia, and how one must remove from society any and all unwanted elements to achieve it. Dhimas himself seems to play one of these ‘unwanteds’ in society, as he lazes about. However, taken over by a sudden, supernatural force, he begins to lose all sensation in one foot, perhaps as punishment for being a bane to society. He realises he must make himself a useful person again, and ventures out of the house with a backpack and crutch, an odyssey to prove himself worthy, moving down the corridor towards us.

Along the way we see him struggle, often facing further deteriorations in his body as he treks across a harsh environment, physically pushing himself to his limits as he slams himself down and gets back up again. He empties out his backpack, and what is contained inside are merely shoes after scores of shoes, from sneakers to high heels. We do not know what these represent – are they the remnants of those who have departed before him? In any case, the sight of them is a little absurd, but motivates him to press on nonetheless. He reaches the peak, scales a table, and emerges triumphant before exiting, still limping but very much alive.

Immediately after Dhimas exits, Sini Ratutjoki comes in as a ‘maid’, donning a rather messy get-up, adorned with cleaning paraphernalia. She sets to work cleaning obsessively, mopping up the mass of shoes Dhimas left behind. It goes from calm to anxious, her movements growing furtive while she precariously hangs a bucket on top of a pole attached to her. Accompanied by music, each time it falls to the ground, the music abruptly stops and plays restarts while she continues to clean, and we feel her growing increasingly stressed as she rushes about.

But just when it seems she’s about to give up, she turns to the table and sees a cup of coffee. Casting off her cleaning gear, she sits down, drinks the coffee, and we feel a sense of calm radiate through the entire space (helped by the visuals of petals flowing in the wind on the projection screens on the walls). With this, Sini has performed Kopisisu, about finding meaning in the little things and the reliability of a personal comfort zone. Sometimes utopia isn’t a place – it’s a ritual or an activity we know that helps us carry on amidst the madness. 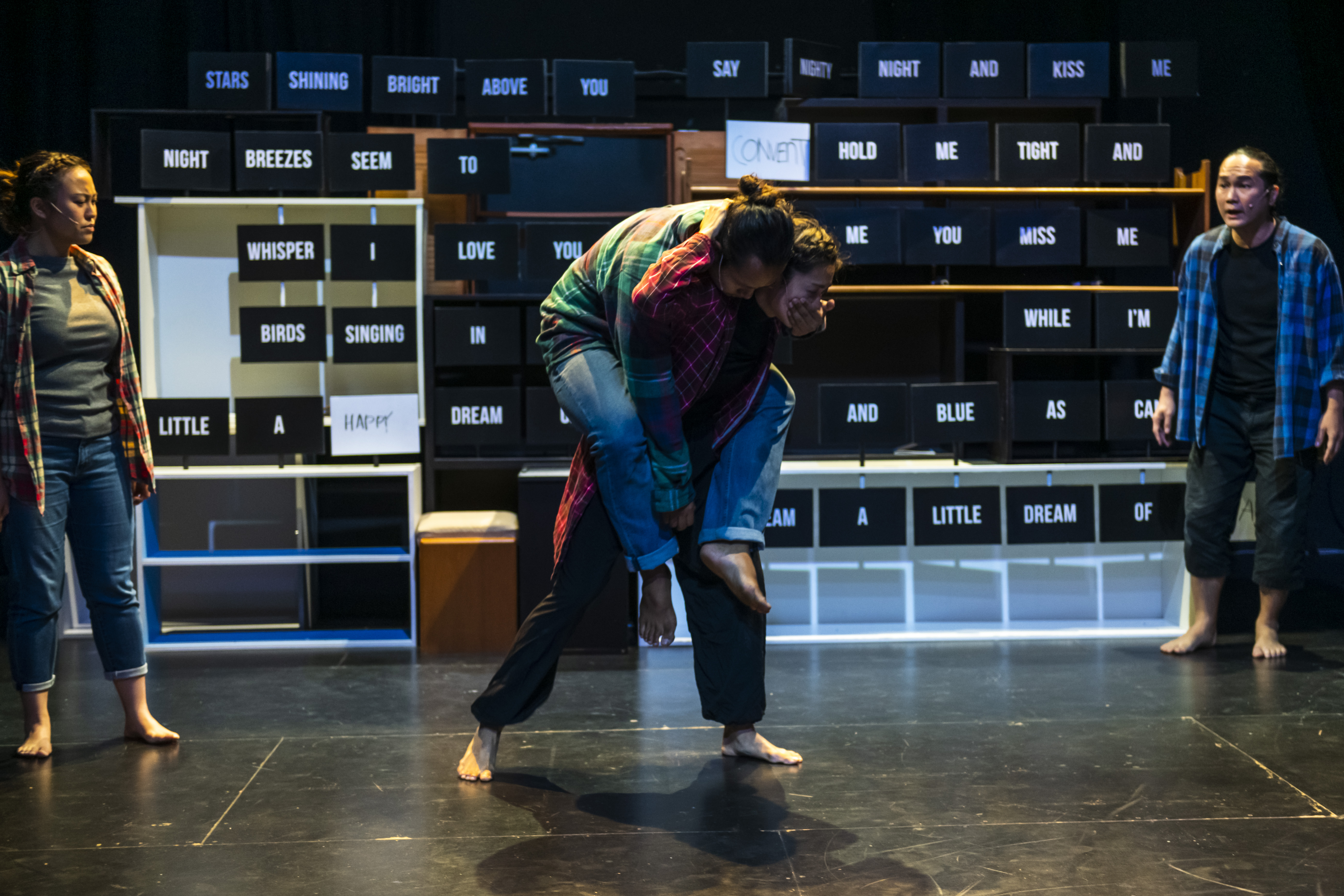 With that, we move into the final performance space – the black box, where we watch Ang Xiao Ting’s Songs of Tau. Rather unexpectedly, the topic she has chosen to focus on is dementia, explored in her work Songs of Tau. Joined by Dhimas, and actors Ethel Yap and Ric Liu, the four performers attempt to take audiences into the mind of a person going through dementia, taking us from a clear mind to addled frustration. Songs of Tau features the most elaborate set-up of the five pieces, seating audiences on either side of the stage while the lyrics of ‘Dream A Little Dream of Me’ are arranged at the side, each word on a single placard.

Over the course of Songs of Tau, actors take turns posing the same series of questions to each other, with the responses logical and confident at first, before slowly degenerating into nonsense. Audience members are given one placard from the song each, and ‘describe their life in one word’ on the opposite, blank side. While Ethel and Ric sing ‘Dream A Little Dream of Me’, the placards are flipped randomly, to sad and hilarious effect as they continue to sing in spite of the incongruous lyrics. Xiao Ting and Dhimas then play a couple, loving at first, but breaking down thanks to dementia, with Ethel and Ric asking and answering the questions to each other, but basing their answers on the nonsense lyrics instead, each word delving into an angry rant as they struggle to remember the truth. We end Songs of Tau seeing a projection of a fish tank and goldfish swimming inside it, representative of the goldfish memory the dementia-ridden are associated with, and think of how the dementia-afflicted are robbed of all choice, all control, and all freedom, betrayed by one’s own mind. 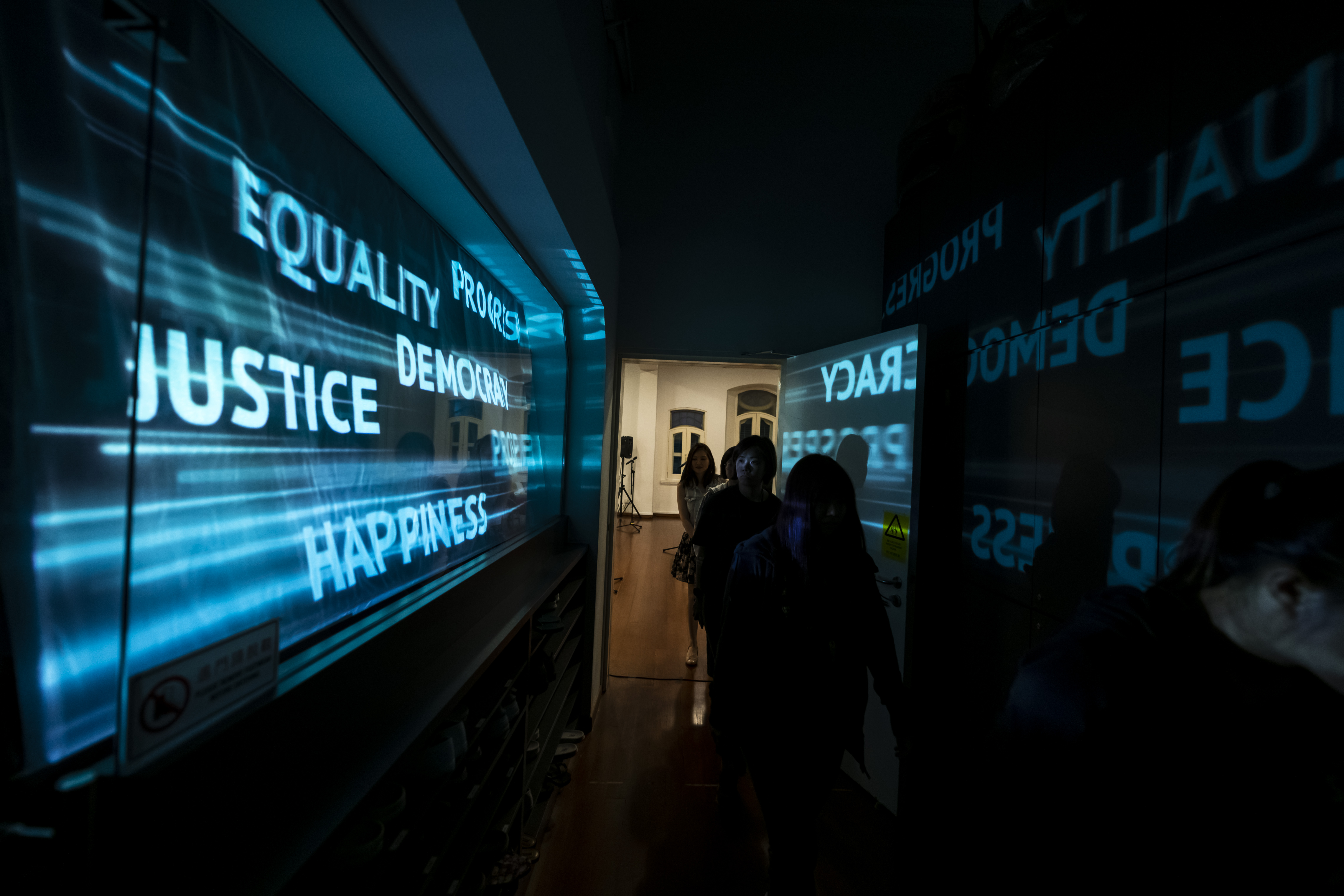 Throughout the entire PROJECT Utopia, we are accompanied by Kuo Jian Hong’s FLAME. Assisted by Sandra Tay, the audiovisual work sees projections on the walls and screens of the building, which helps fully immerse audiences into the entire experience. From projecting the key words from Ming Poon’s The Pledge that resemble rushing cars on a night in they city, to the petals in Sini’s Kopisisu, the works are tied together by FLAME both visually and atmospherically, allowing PROJECT Utopia to go beyond a collection of five works, to become a truly interdisciplinary and intersectional single work.

Still in the black box, PROJECT Utopia ends where it begins, and we see the visual of a blue-grey sky as seen from beneath a body a water. A single flower floats past, while we hear audience members’ words said during Ming Poon’s The Pledge, gathered in a single, haunting soundscape that remind us of the strong desire for change and the belief that a more utopian society can and is possible still, allowing us to feel invested and invigorated that our words are not forgotten. As a whole, PROJECT Utopia is a remarkably well-curated project that flows smoothly from one artist’s work into the other, presenting a myriad of fascinating experiments and explorations into utopia that all feel interconnected in some way.

We came into this work not knowing what to expect, and left it impressed, filled with hope and the drive to make our individual utopias a reality. What utopia is ends up never getting defined nor we any closer to reaching it, but with some of the most original and exciting new ideas we’ve seen in some time and a total commitment to crafting a unique, well-integrated audience experience, PROJECT Utopia is a masterful experiment in form that has allowed The Theatre Practice to reach new heights of artistry, discussing universal concepts in an engaging and accessible way. This is a work that has managed to fully highlight the ‘art of play’, and a prime example of why the M1 Patch! Festival has the potential for seeding new ideas and push the local arts scene into previously unchartered artistic territory.