It is not the truth, but the semblance of the truth that truly matters in SRT’s first immersive production.

Presented by the Singapore Repertory Theatre (SRT), Caught plays as part of the Miaja Gallery’s Dissonance exhibition, inviting recently released Chinese fugitive and dissident artist Lin Bo to speak at the gallery itself. Caught is directed and conceptualised by Ed Sylvanus Iskandar, with text by Christopher Chen, performed by Lin Bo as he recounts his experience imprisoned in a Chinese detention chamber, speaking of the nature of protest and dissidence. It’s not long before the piece quickly spirals into something far more complicated however, as it examines the very nature of truth itself, in a post-truth world.

Prior to the experience, it’s hard to tell exactly what to expect from the evening, told only to dress according to a ‘Chinois Chic’ theme and to don comfortable footwear when we come. Even walking towards the nondescript grey building itself, it’s impossible to guess how the night will play out, with no way of seeing the gallery until we’re inside. As we approach the entrance, we’re given an opportunity to snap a photo at a Caught photowall, humourously posing behind ‘bars’ – we’ve already been ‘caught’ before the performance has even begun. 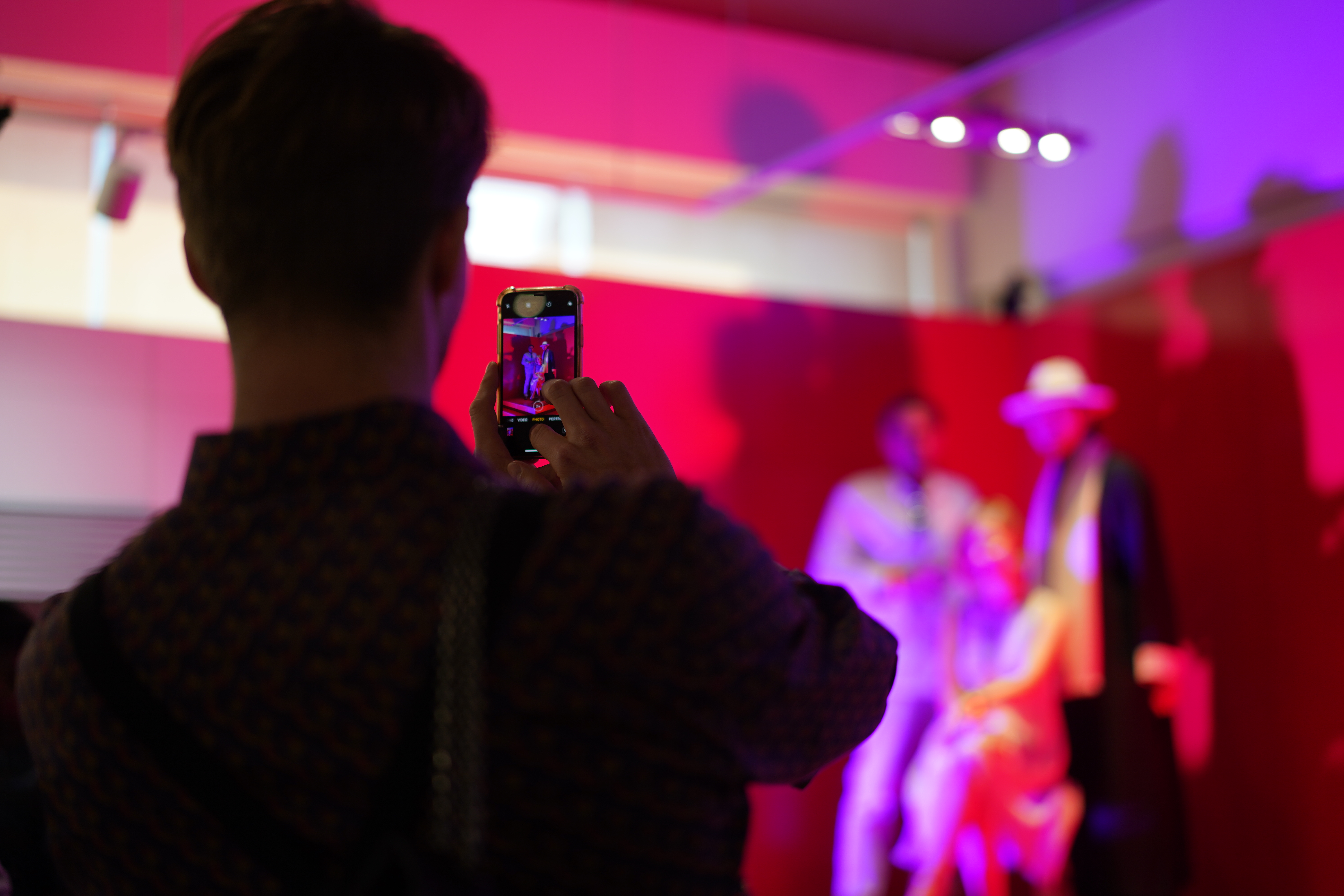 Once registered, we’re greeted by Dissonance curator Chelsea as she personally escorts us into the space, where well-dressed guests are already busy mingling, engaging in discussion, banter and gossip at length as they mill around the exhibition and quite simply, seem to be having a good time before the main event, admiring and discussing the art around them. As we wait for Lin Bo to make his appearance, we take time to admire the art in the exhibition, which strikes us as somewhat unnerving to look at. Within Dissonance, we see several 3-D resin sculptures of fish that look uncannily real, while all around us are strange, almost surreal portraits, along with abstract works that contain eyes or the semblance of eyes, making us feel watched.

When Lin Bo finally arrives, he comes unannounced, and could be easily mistaken for another guest as he slips into the crowd and blends in perfectly. It takes a couple of observant and curious guests to begin talking to him before the rest of us slowly realise who he is, after which guests begin to snap photos with him. It feels a little like a theme park attraction, a fascinatingly kitsch idea to consider when the man before us is an actual former political prisoner who’s suffered for his art (more on that in a helpful New Yorker article by Joyce Heleena Curto), now treated like a movie star, an almost ironic and sharply satirical of celebrity culture in this form.

With the audience sufficiently warmed up and ready for something to happen, an announcement is made to turn our attention to Lin Bo. He begins to tell his story, recounting his suffering in the detention chamber he was imprisoned in, ranting and speaking out against the Chinese government. It quickly evolves into an urgent, fervent monologue on the nature of art and its role in protest – one he delivers perfectly and with gusto and conviction in his voice. The reaction to this varies – some people are utterly transfixed, others are noticeably uncomfortable as they shift about, distracted, while others let loose a guffaw they attempt to stifle at some of his more ridiculous ideas.

Ending off his speech with on an obscure, abstract note, the audience is shuttled to the second floor of the exhibition, where more art awaits and the performance continues. Suffice to say what follows is a series of events that leads us into an increasingly heady state of constant confusion the longer the production goes on, never sure where the artifice begins and the truth ends. More backstory and insight awaits us as we delve into the New Yorker article, watching a skit play out before us on a stage (complete with set and backdrop). Being seated, the space here is far tighter for the hundred over guests, perhaps deliberately reminiscent of the tiny prison cells Lin Bo speaks of. Even the set itself, with a distinct, red frame, reminds us of a prison that the players onstage have been trapped in.

When set changes happen, stagehands are introduced into the work to break the suspension of disbelief and illusion of reality, and we are made keenly aware of the construction that goes behind each performance that unfolds. As the crew and artists prepare for a live segment, audience members are given some time to refresh ourselves and get some drinks, before we settle into our seats once again. This time, we’re left in the hands of curator Chelsea as she leads a live session with the artist. While seemingly innocuous at first, complete with audience participation as they raise questions of their own, things begin to take a turn for the weird as we realise not all is at it seems, with more layers and ‘truths’ are revealed as the session progresses. Caught unawares, we quickly learn to stay on our toes to face new revelations and character developments, yet time and time again, Caught manages to bring to light new facts that cause us to question everything we think we know about the set-up right to the very end. 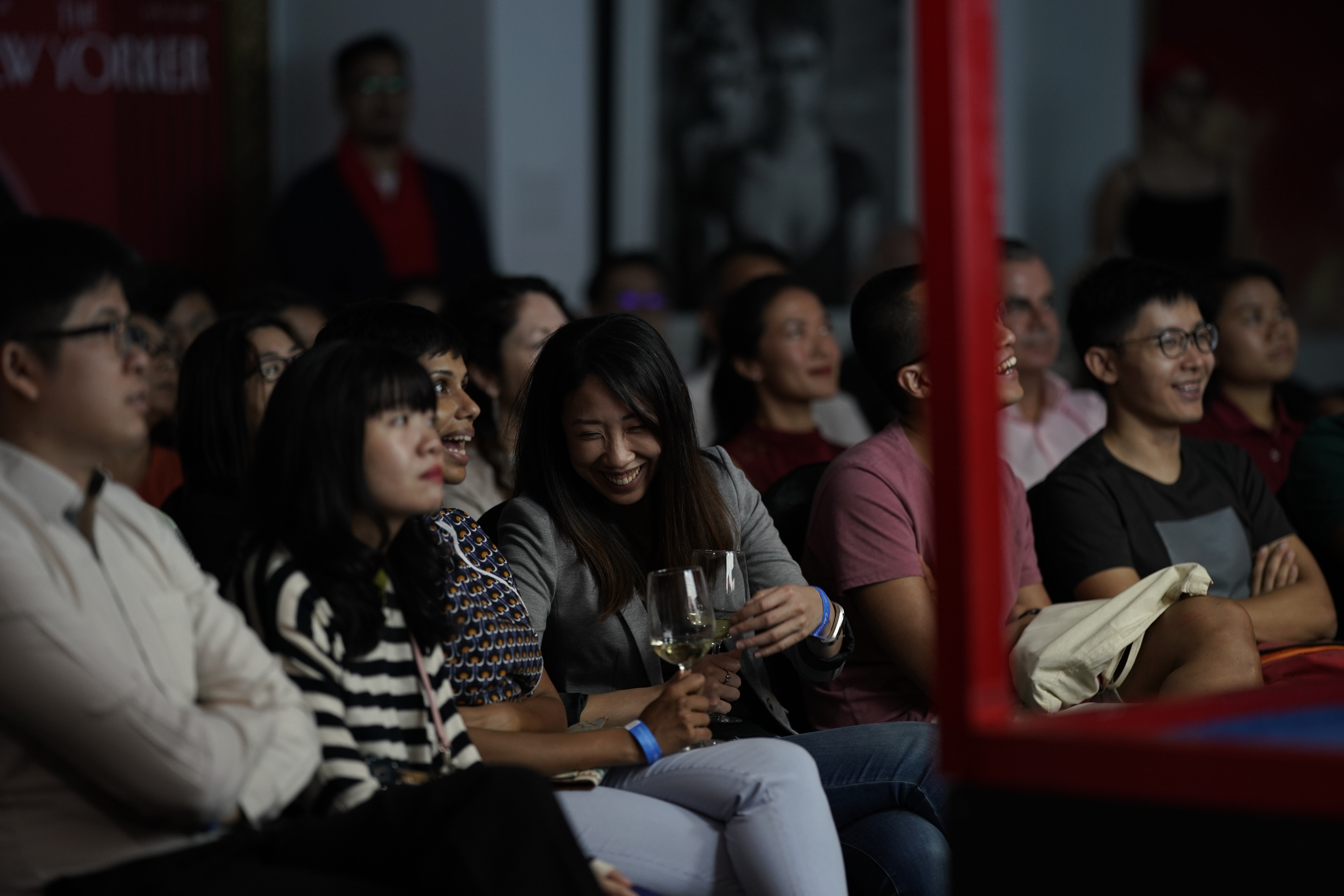 Throughout the evening, Caught continually introduces audiences to unique sets of theatrical rules, something that will no doubt discombobulate guests more used to traditional shows. And each time you think you know exactly what you’re experiencing, it pulls the rug from under you again and re-establishes a new set of rules in which to experience the show, bringing us through multiple realities and layers of truth, untruths and identities. Even when suspicions of each performer’s intentions are raised, thanks to Christopher Chen’s crafty, believable (and often hilarious) script, Caught provides just enough grains of truth to keep us hanging onto their words and take them seriously for a while, at least, before the next shift.

If anything, it’s an experiment into how far one can push and twist at audience members’ psyche as they mentally wrestle with and re-adapt their minds to each segment of the performance before they give up entirely, or fully allow themselves to immerse in the uncertainty of it all. Under Ed Iskandar’s direction, whether some segments are, intentional or not, highly uncomfortable to watch seems to play perfectly into heightening Caught’s intent to run circles around truth and reality. While the transition from scene to scene can be clunky at times, whether owing to the unusual space requiring more work to navigate and set up or the fact that it’s SRT’s first immersive theatre experience, one continues to appreciate the thought and valiant effort that went into conceptualising and executing such an intellectual, multi-layered and mentally sprawling work of art.

In essence, the world of Caught we step into is one that’s even hazier than the air outside, and with so little truth to hold on to, can often feel terrifying, like we’re falling down an eternal rabbit hole to no discernible end. It’s a deliberately discomforting, uncomfortable production to be a part of, forcing audience members into questioning everything we think we know, even after we leave. Yet, in this world so full of fake news, lies and an ever fuzzier sense of reality, perhaps truth and untruth are not what really matter after all. Instead, the devil isn’t in the details, but in what these ‘truths’ eventually result in making us feel.

Like a fever dream we wander into and out of, Caught results in a simultaneously entertaining and disturbing evening that abstractly addresses the post-truth world in the only way that makes sense: tackling its absurdities head on with absurdities of its own, and a surprisingly emotional ending that reminds us the only thing we can trust is not fact, but feelings. It’s hard not to get caught up in the sheer carnival of madness that Caught is, but in experiencing it, we leave as changed individuals – no longer bound by the shackles of relying on a reality based solely and completely on truth, but with our minds now freed to believe and accept the many realities and contradictions that make us quintessentially human.

Follow Lin Bo @linbo.caught, and read his story at www.caught.sg