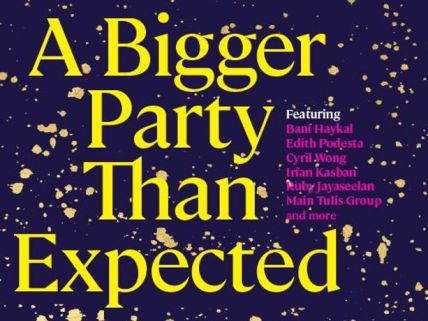 In celebration of Eurasian literary pioneer Rex Shelley, the Singapore Writers Festival is once again collaborating with the Arts House in bringing festival goers a wild night of fun and performances around the entire building with A Bigger Party Than Expected.

Taking inspiration from Rex Shelley’s seminal novel The Shrimp People, The Arts House is set to transform into a Eurasian wedding, as we watch characters Bertha and Heng getting married, with everyone invited to join in the festivities and partake in the wedding band (Muzik Line) and traditional Eurasian food and drink (from Quentin’s)! Acting as the start and end of your journey, audiences will also spend the night wandering through the Arts House’s various venues and discover a host of other performances by a curated group of local artists, each one taking inspiration from various quotes from the works of Shelley.

Sound artist Bani Haykal presents Encrypting Kinships, taking audiences on a sound journey written entirely in ciphertext – a unique form of encrypted language. Participants will reflect on the nature of kinship cryptically described as a threefold process of Initiation, Dream State and Transcribing. Local poet Cyril Wong will be performing RISK, as he performs a dramatic reading of a letter “RISK” interspersed with classic songs from the eighties, including Wow by Kate Bush, Nothing Compares To You by Sinead O’Connor and Sometimes Love Just Ain’t Enough by Patty Smyth and Don Henley.

Finally, theatremaker Irfan Kasban gets involved with two pieces for A Bigger Party Than Expected, with Watch My Damn Mouth (with Ruby Jayaseelan) and Almari with Andre d’Rozario). With Watch My Damn Mouth, both Irfan and Ruby will respond to each other’s vocal gestures and sounds in a vocal movement piece, while in Almari, d’Rozario performs a monologue written and directed by Irfan Kasban exploring the tenuous relationship between the Eurasian body and coloniser.

Whether you’ve read Shelley’s works or not, A Bigger Party Than Expected is set to bring these words to life as never seen before, and if anything, prove the legacy and seminal nature of his writing, and the importance of the Eurasian culture and inspiration it has on art today.

A Bigger Party Than Expected runs at The Arts House on 1st November 2019 as part of the Singapore Writers Festival. Tickets and more information available here