Powerful work that highlights the meaninglessness and absurdity in everyday living.

How do we recover from a traumatic incident? For artist and theatremaker Oliver Chong, the answer was to take a break, stepping down from his position as a Resident Director at The Finger Players and plunging himself headlong into absurdism and belief in the inherent purposelessness and meaninglessness of life amidst a chaotic universe.

That surprise detour seems to have inspired Oliver to find solace in art, with one text in particular that seems to have stood out for him: Albert Camus’ The Stranger (L’Étranger), whose plot, along with the inclusion of plot points from other existentialist and absurdist literary works, act as the basis for his comeback production and one-man show A Fiend’s Diary, where we follow an unnamed protagonist characterised primarily by his indifference towards life and the quintessential poster child for absurdism as he leads life uncaring, unfeeling. 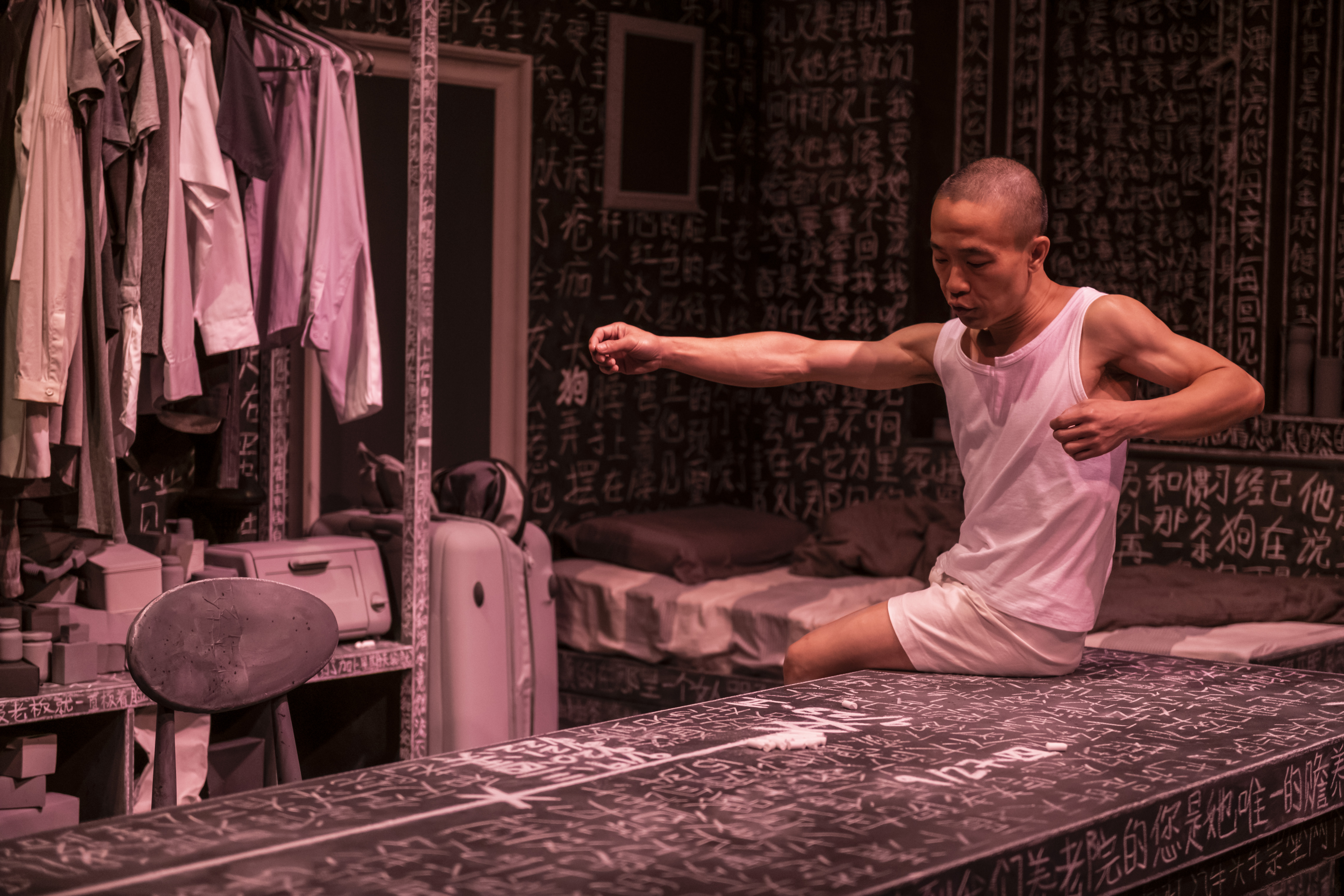 A Fiend’s Diary begins with Oliver Chong onstage, housed in a daunting, house-like set (also designed by him). Monochromatically depicted in black, white and shades of grey, the most significant aspect of the set is how the entire playtext is painstakingly scrawled across it in chalk. Even though we certainly don’t have time to read it in its entirety over the course of the play, certain characters are highlighted to draw our attention to them, as if telling us the most important parts of the script we should note. While it does resemble a small studio apartment, with simple furniture, a clothes rack and a bed, one also notices its shuttered windows, and tiny square holes up above, reminding us of a prison cell and creating a greater sense of claustrophobia. 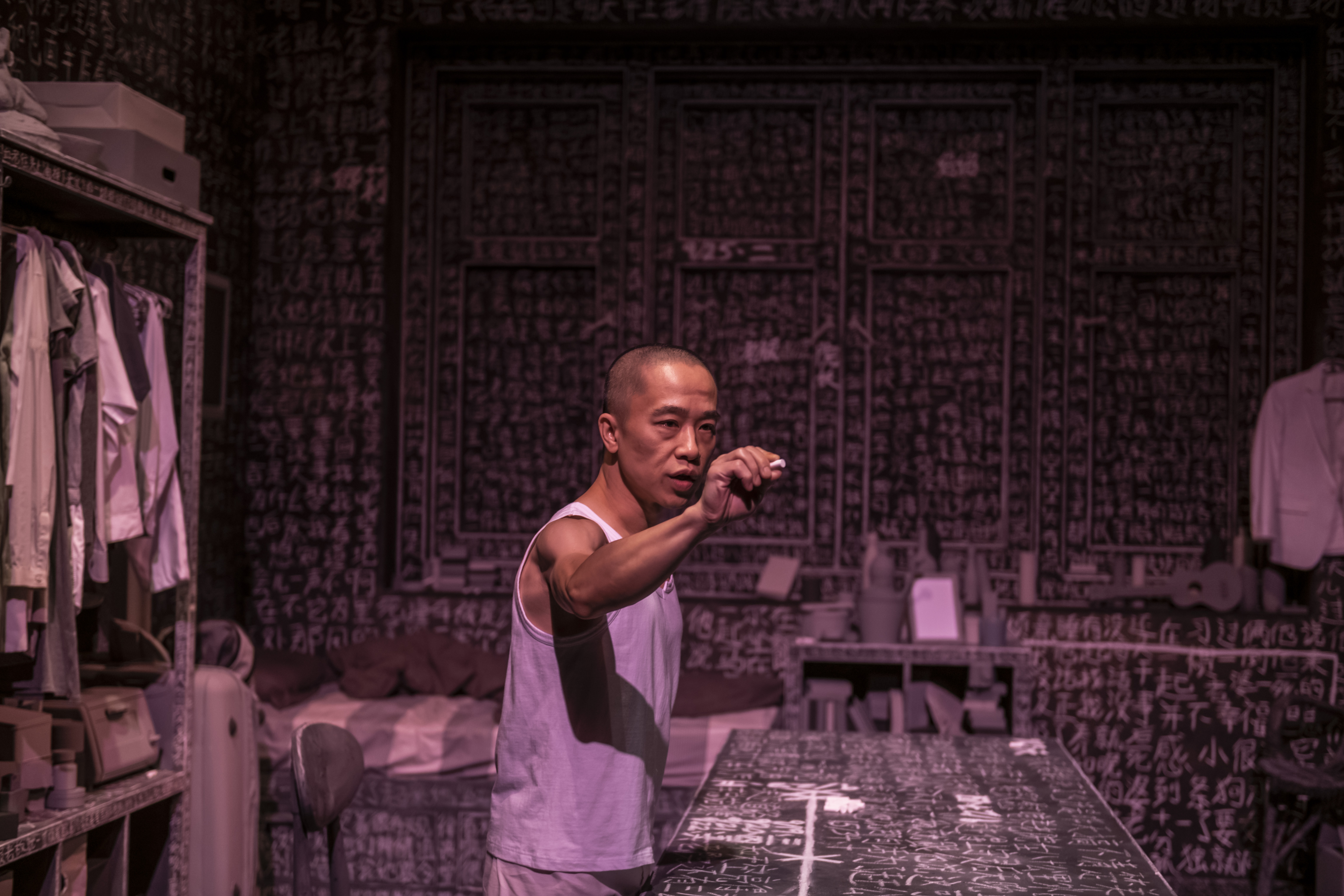 The set then, could almost be seen as a representation of our unnamed protagonist’s state of mind, with the domesticity and safety of home life corrupted by his own feelings of entrapment within his own body, within society and life itself as if they were prison walls slowing closing in on him. unable to escape his own story that literally is written on the floor he steps on. Oliver himself appears thin and pale, almost unwell as he begins the performance, sitting up and staring blankly, before he tells his tale of woe. Our protagonist is focused on the details, recalling precisely how everything begins on 19th September, a Wednesday, as his mother dies in a retirement home. Yet as much as he recalls the precise date it happens, he seems to have stopped caring about what day it actually is today, as he no longer recalls if that day was ‘yesterday’, or even ‘today’. 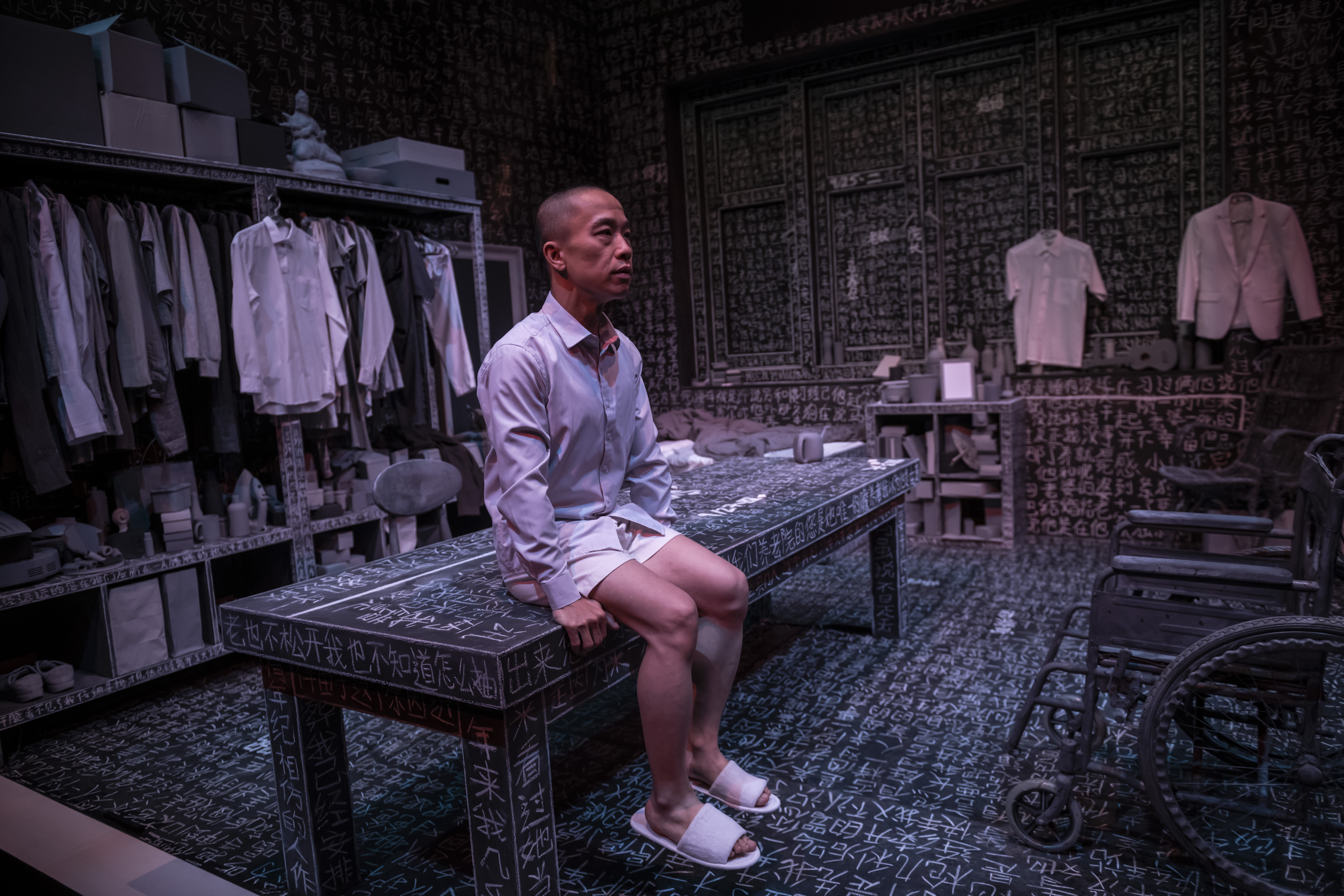 Our protagonist seems to express a tinge of regret at not having visited his mother more, but explains how arduous the journey to the retirement home was. It is now Sunday, a rest day for most. Following his mother’s funeral, our protagonist goes to his balcony, noticing how the waiter from the coffeeshop is sweeping the floor, and a family just walking out of the coffeeshop. He recalls having gone to the beach and encountering a girl named Lina, savouring the description of her supple bosom and almost coming alive with the sensuality and sexuality of describing her body, lying on her stomach like a pillow, and simply staring at the sky, one of the few things left he is still excited by. 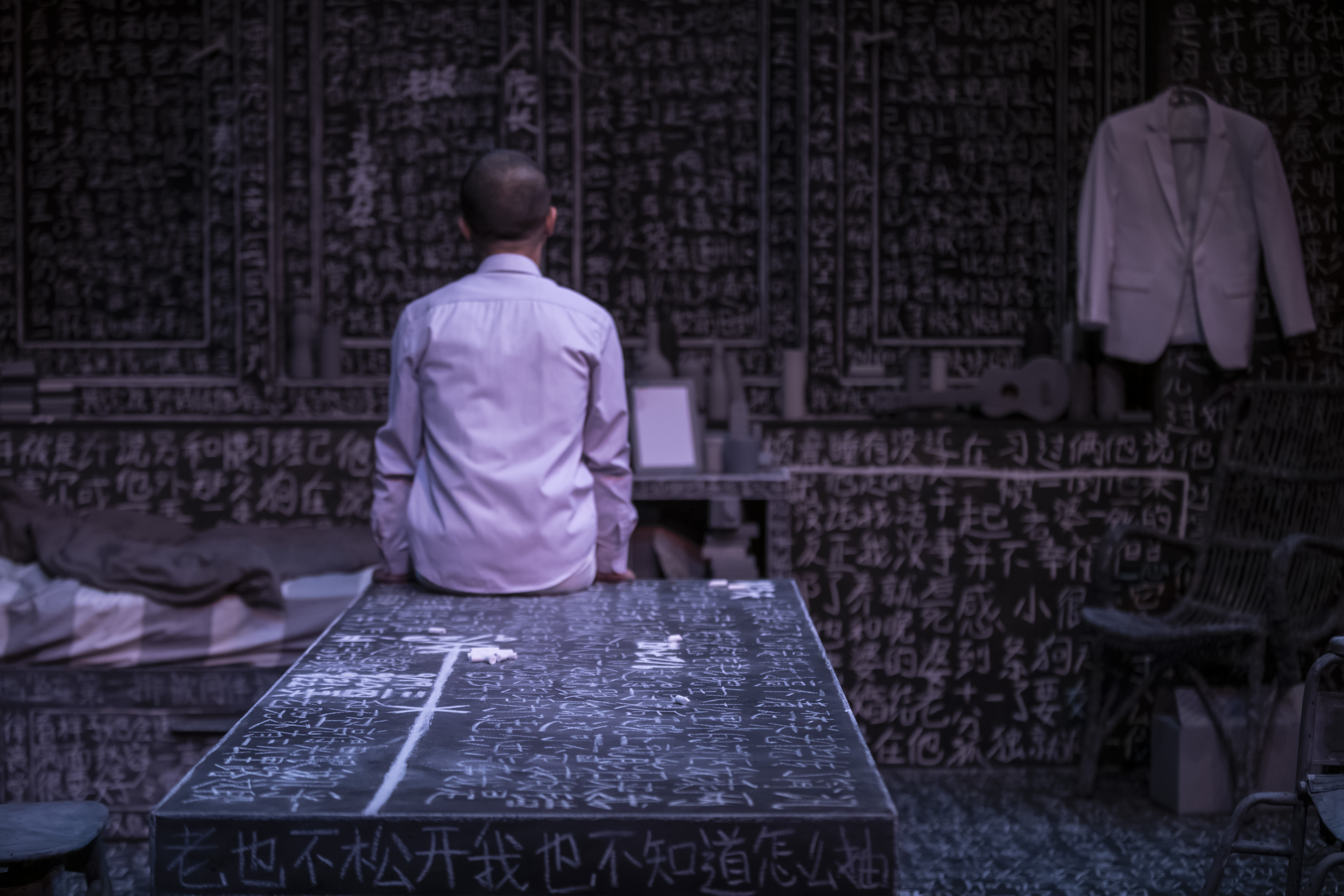 He recalls his encounter with Marcel, who seems to have a love-hate relationship with his dog. Yet, in spite of his frustrations with the dog, it remains his best friend, probably his only friend, and is practically what’s keeping him alive. Having lost the dog then, Marcel seems to have lost the will to live. In talking to our protagonist and finding a solution, Marcel then hands him a gun which he owns. With no idea what to do with it, our protagonist simply puts it into his jacket pocket. He is then requested to return to the retirement home to pick up his mother’s belongings. Leaving the home, the sun blazes down on him and sweat trickles into his eyes. When a young girl cuts in front of him at the bus-stop, his frustrations mount and he off-handedly reaches into his pocket. Feeling something cold, suddenly recalling the gun Marcel handed him, he takes out the gun and shoots the girl dead, something he never intended to do yet does so out of convenience. We then fast forward to him being incarcerated in prison for this unforgivable crime. 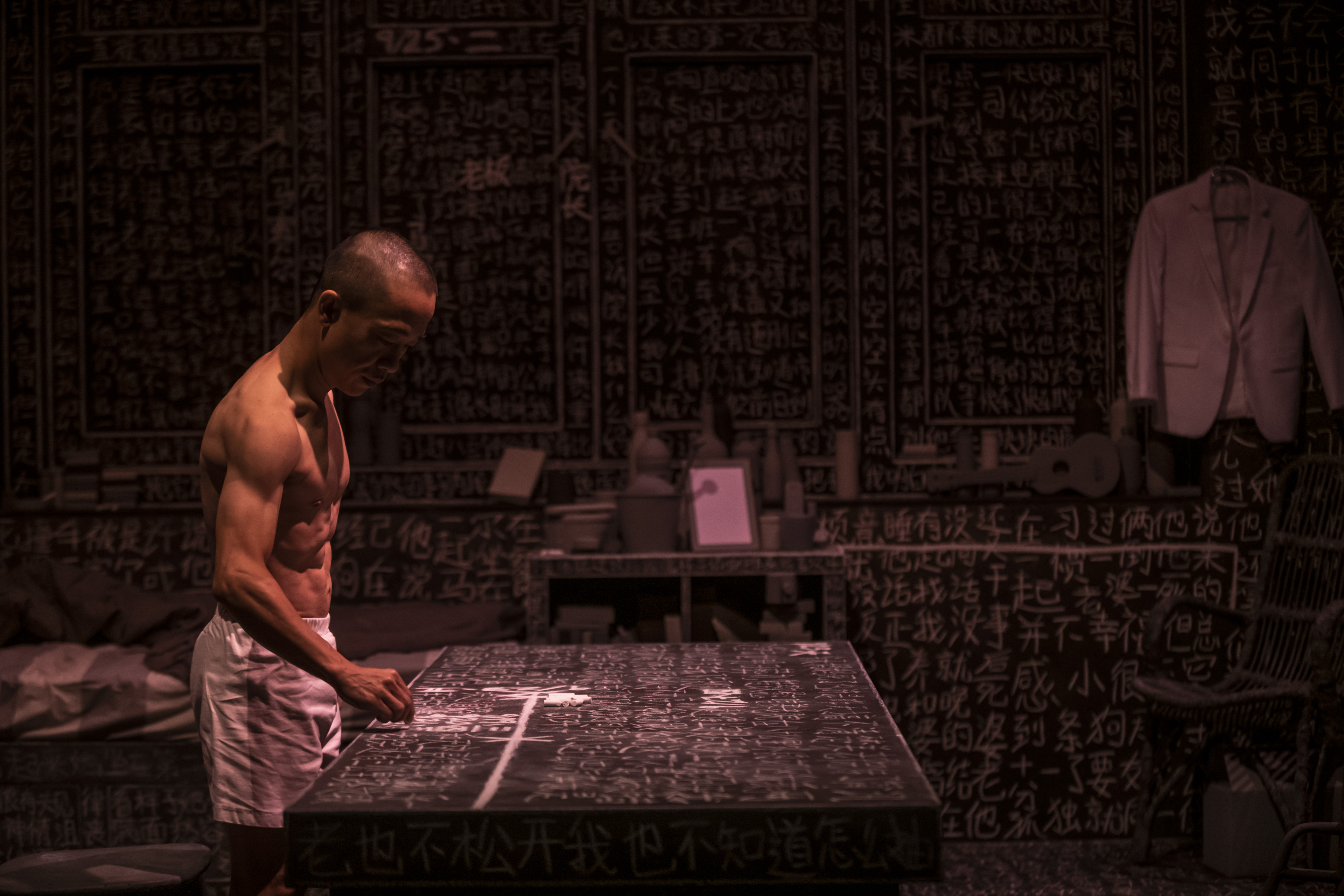 As the trial begins, we meet one ‘witness’ after another – the director of the retirement home, a gentleman who was at the bus-stop, and even Thom, his mother’s boyfriend, who wouldn’t have added anything of value to the outcome of the case. When Marcel takes to the stand, we realise he’s only alive because of our protagonist, he would already have killed himself, with the gun being a would-be instrument to his death. A coffeeshop worker recalls seeing our protagonist ‘spying’ on the family the murdered child was from, as if he long ago already had the intent to kill. Unlike our protagonist, members of the public ignore the details, pre-judging him with all their pre-conceived notions and burying the truth and facts of the matter along with it. 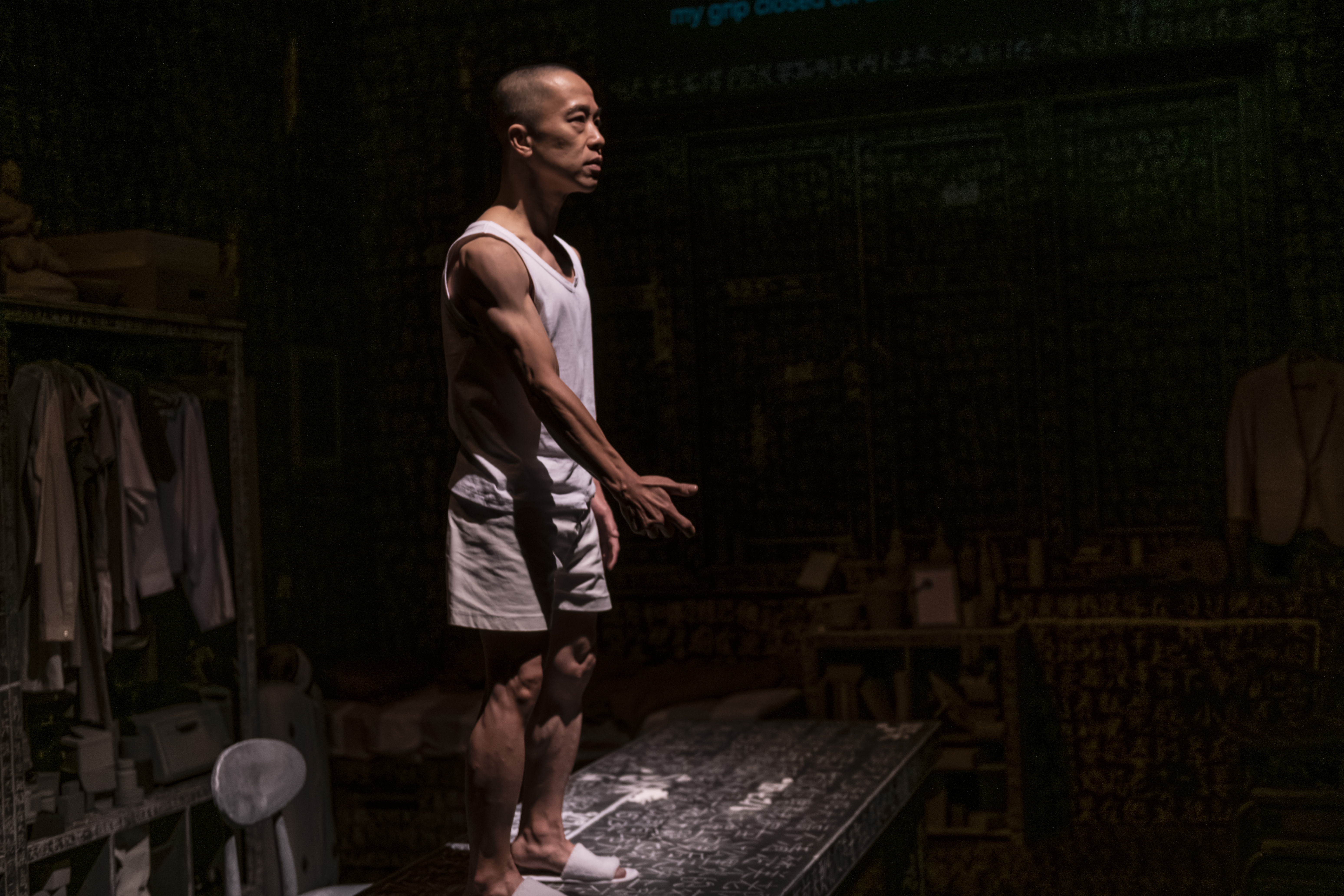 Throughout the trial, time fades to a blur, initially recounted as 1/11/1111, before reaching the absurd X/XX/XXXX. Things no longer matter now that he is judged to be a heartless, sociopathic man. The final verdict is inevitable – the death sentence, made worse by the method being a public beheading. By choosing such an ancient method, it’s almost as if A Fiend’s Diary is passing commentary on how much of the methods we employ today are outdated, questioning why we still choose to persist with these and why are we not updating ourselves and keeping up with the times, and choosing to live in the past instead. 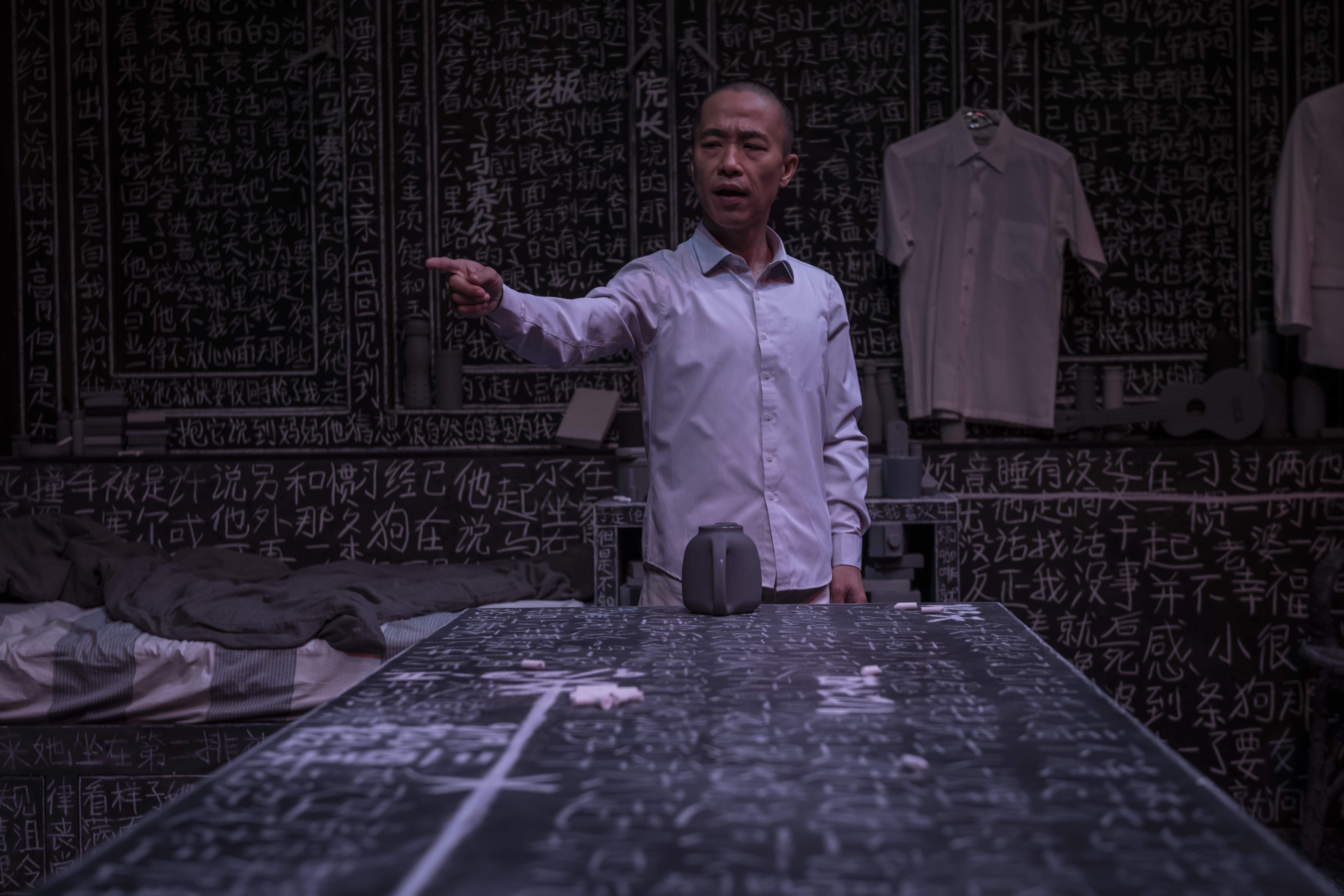 Returning to his cell, it almost feels like our protagonist is now lying down at the bottom of a deep, dried-up well, daunted by the sheer height of the ceiling that suggests an inescapability from this hell. After three days of rejecting the priest attempting to perform his last rites, he finally seems resigned to his fate. He then puts on a white shirt and white pants, almost resembling the authority that has put him in this position. Our protagonist now stands still and stares into the distance, almost with fear in his eyes. He lies down and looks up at the sky full of stars, almost as if saying how freedom is so near yet so far. He now puts on a black tie, almost as if he were preparing to attend a funeral, and puts on his shoes setting off on a new journey. At this point, he looks empty, vulnerable, but ready, as he puts on his coat as if to look presentable for his own execution. 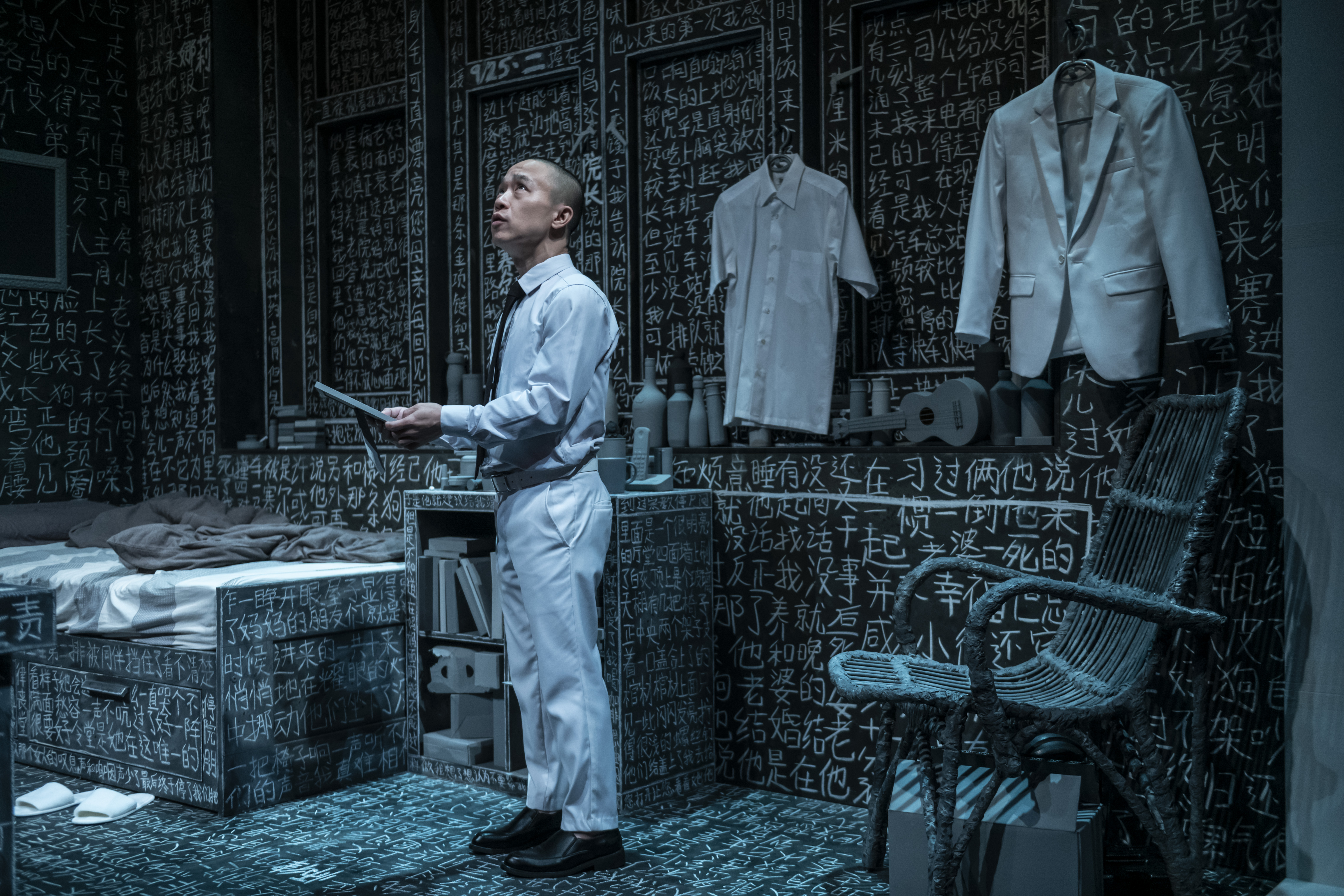 Oddly enough, there is a grim satisfaction our protagonist finds in harbouring all this indifference and knowledge that nothing really matters in the world, and ends by hoping for a huge crowd to be present at his beheading, all there to watch him die. He then walks into the light as if he is about to be executed, the light dims, and he bows to the audience, walking out through a figurative door, and exits to end the show. We think of the Chinese saying 人生如戏 – that all the world’s a stage and life itself merely a performance. 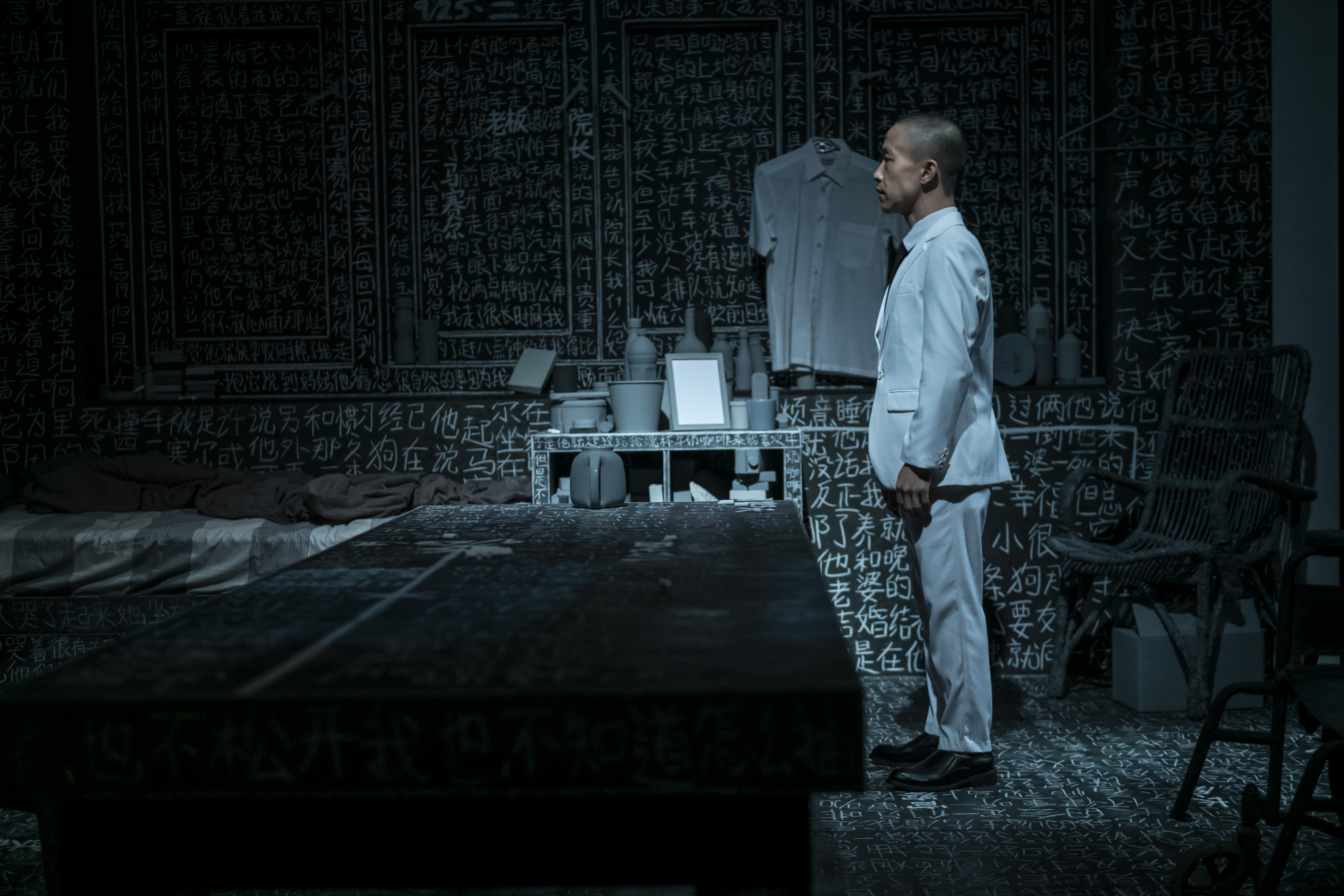 Armed with countless ‘trapdoors’ in its script, we watch our protagonist fall to the depths of despair, with a single note that repeats itself plays over and over in the show, almost providing him the rhythm and pace over the entire performance. Our protagonist never stood a chance against the guilty verdict, and we are filled with a sense of pessimism at how we are unable to escape the deplorability of living, or the way we are perceived as ‘fiends’. Pushing boundaries by tackling uncomfortable questions and dark themes, and with a stellar performance that sees Oliver shifting seamlessly from one character to another, days after watching A Fiend’s Diary, we are still pondering over the effort it takes to find meaning in a hopeless world, and whether it is even worth to fight for the truth, when there is little to nothing to live for.

A Fiend’s Diary played from 24th to 27th October 2019 at the Drama Centre Black Box.

0 comments on “Review: A Fiend’s Diary by The Finger Players”