“Run run as fast as you can, you can’t catch me I’m the Gingerbread Man.” The iconic lines of everyone’s favourite anthropomorphic baked good has been taken quite literally in SRT’s The Little Company’s latest musical for kids, with the titular Gingerbread Man using his need for speed to win the coveted prize in a race.

Set on a picturesque farm (with a gorgeous, colourful backdrop designed by Diego Pitarch), much of The Gingerbread Man focuses on the importance of teamwork and living together to keep the place running. Directed by Kate Golledge, with a book and lyrics by Caroline Wigmore and Jennifer Green, we open the musical as a big race is about to begin, and are introduced to Anya (Natalie Yeap) and her Weasel friend (Ryan Ang) as they prepare for a bake sale. 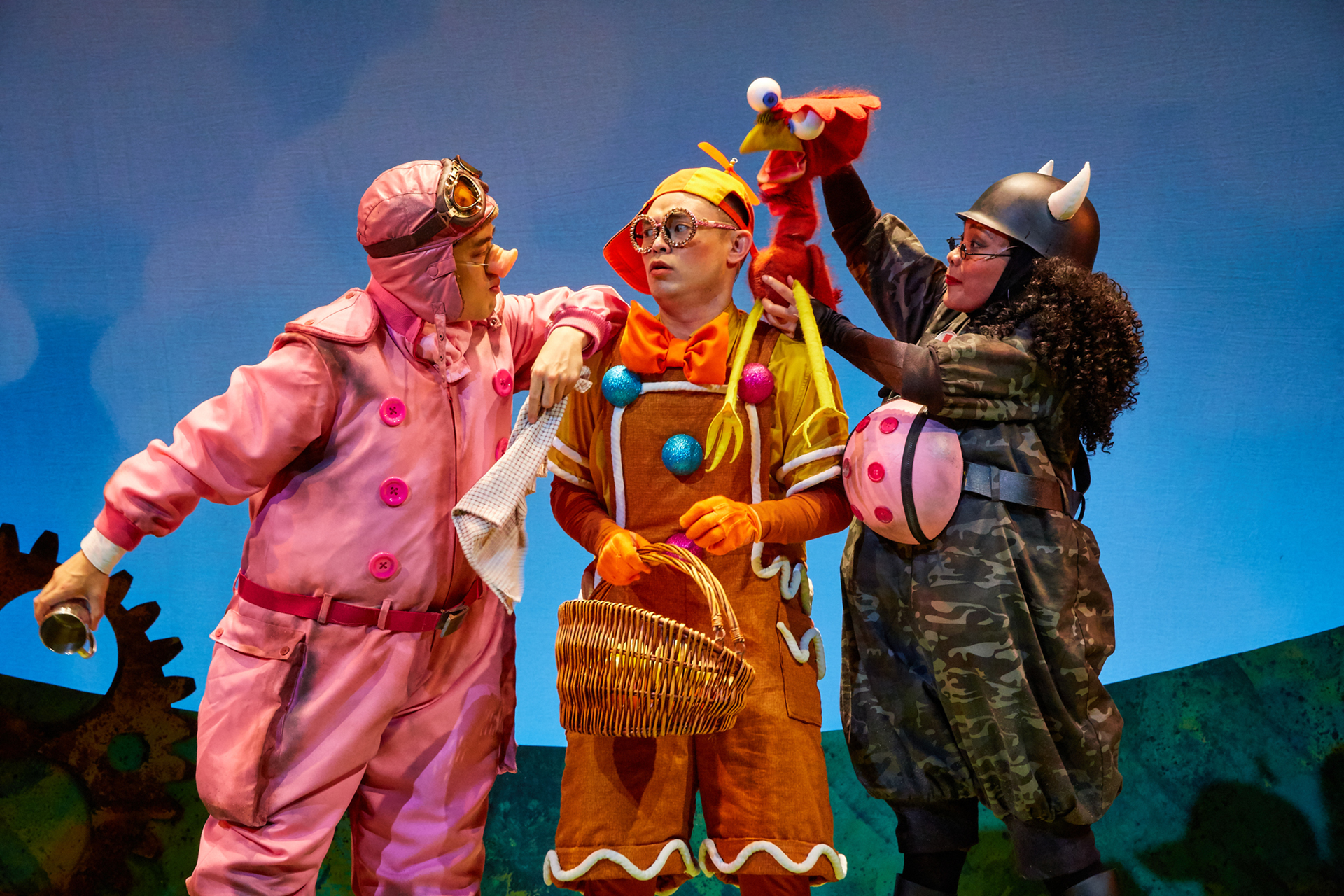 Anya mixes up some ingredients – cinnamon, butter and golden syrup (singing each ingredient out loud as she adds them) before putting the mixture into an oven to bake. Requiring electricity, the cast then gets the audience to help generate it by dancing along to power up the oven. As the cookie begins to ‘bake’, we could actually smell vanilla essence pumped into the air, helping us imagine the freshly baked scent of cookies before us, before Ginger (Juni Goh) the Gingerbread Man pops out of the oven in grand fashion. Flamboyantly dressed like a small child (complete with propeller cap), he sings and dances along to the appropriately titled ‘Energy’ to introduce himself to the audience, adding a burst of energy into the show as he introduces himself with ‘The Gingerbread Man Song’.

With his seemingly limitless supply of energy, it’s only natural that he expends it somehow, and Ginger asks Anya (his ‘mother’ if he can join the big race. But before he’s allowed to do so, he must complete a series of chores and help out the rest of the farm. Credit is due to Natalie Yeap, who plays her role as Anya with gusto, and shows off her keen puppetry skills well with a chicken puppet. The impatient Ginger speeds through his tasks, from collecting eggs to harvesting corn, but as we all know, haste makes waste, and most of his tasks are completed shoddily. Things come to a head when an attempt to bake faster, he even turns the heat up on the oven so high, it explodes! 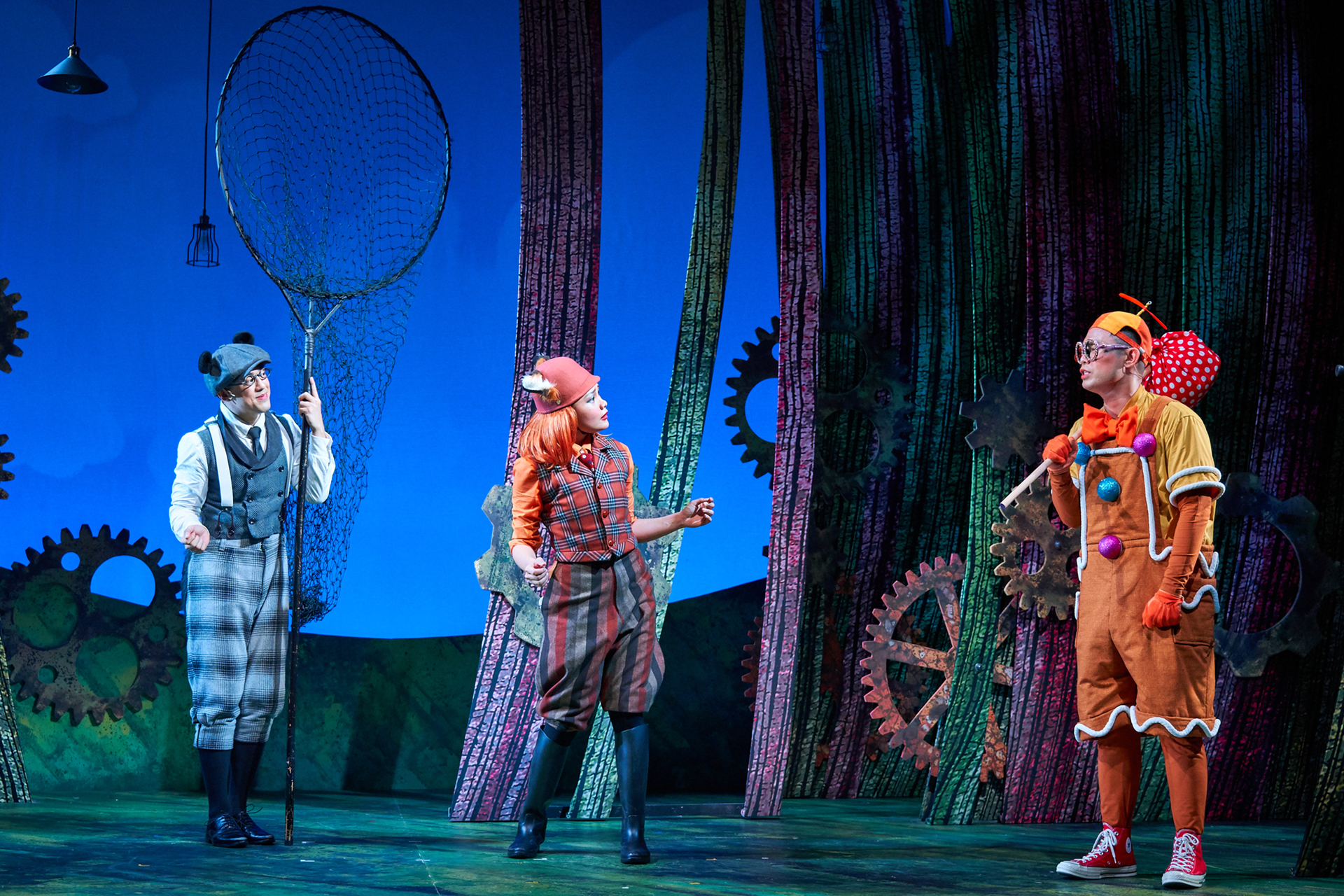 With Anya’s beloved oven broken, Ginger becomes desperate to make up for his mistake. Told by the Sly Fox (Alyssa Lie) that he could win a brand new oven if he wins the race, Ginger becomes blinded by the prospect of winning, and rushes to participate without permission from Anya. He engages the audience to do warm-ups with him as he prepares for the run, getting the audience to cheer him on. Upon losing the race thanks to the Fox’s tricks, Ginger is both apologetic and disappointed. Yet, Anya reassures him that she doesn’t blame him, but that he simply needs to learn how to be a better team player. When Ginger finds himself in danger of being eaten by the Sly Fox, he finally learns to work together with the rest of his friends and survive. The Gingerbread Man is a rousing and energetic production, with strong set and puppetry design that helps bring out its fantasy world. However, in terms of Ginger’s character design, while it is clear that the team intended to present him as a young boy to help the younger audience members relate to the story, the resulting “cookie-boy” feels visually off-putting instead. In addition, despite being performed with gusto, the songs and choreography seemed difficult for the majority of the young audience members to follow, and never seemed to really seemed to engage them, nor compel them to sing or dance along. With a weak narrative that needed more clarity, and numbers that were unable to connect to the audience, The Gingerbread Man resulted in a production that ultimately, needed an extra ingredient to really shine.

The Gingerbread Man plays from 23rd October 2019 at the KC Arts Centre. Tickets available from SRT

0 comments on “Review: The Gingerbread Man by SRT’s The Little Company”