Yung Raja is, in a word, young. But in spite of his youth, the local rapper and occasional actor has already been making waves over the last two years as a mainstay across both local and regional festivals, breaking through as one of the hottest up-and-coming artistes, and as his Spotify profile reads, “hip hop’s next avant-garde bilingual artiste”, thanks to his unique compositions that unite both English and Tamil lyrics.

Yung Raja’s star only seems to be on the rise as 2019 draws to a close, having been signed to Universal Music Group’s new label division Def Jam SEA, and having released the music video for his latest single “Mad Blessings”, which to date has garnered over 1 million views, and the artiste couldn’t be happier, all smiles and armed an easygoing charm from the moment we met him. “It’s just such a great time to be in rap right now, and I’m so glad I’m a rapper in this day and age,” he enthuses. 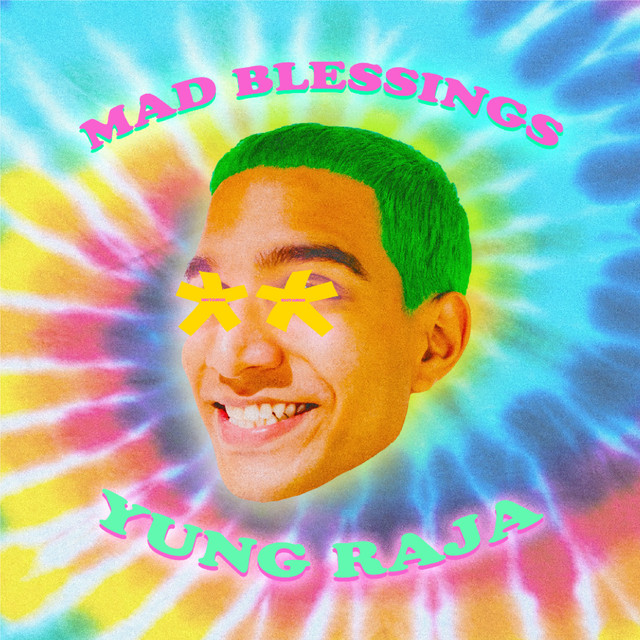 Speaking on the origins of “Mad Blessings”, Yung Raja reveals it to be an original phrase he came up with, and somehow caught on amongst his fans and peers. “I come from this family with a lot of love, and grew up as the only son with a lot of sisters,” he explains. “I’ve always been very optimistic, and when music came along into my life, it’s just been one good thing after another that’s been coming my way. I told my team this was such a blessing, and on Instagram, started using the hashtag #madblessings, and before I knew it, I was using it so often that people started saying it back to me!”

“So I told my manager and producer of Madeyoufamous that we should probably make this into a song,” he continues. “We had a session sometime last year, and that was it! Every time I perform it, I feel it more than any other song I perform. It’s more than just a rap song, because it holds so much meaning for me, and it’s all about my life. Plus, the opening lyrics are ‘I just got a record deal’, which I initially wrote because of FlightSch, and now, it’s still as timely because I’ve just been signed to Def Jam! Everything has just aligned so well.”

The music video for “Mad Blessings” has amassed its over 1 million views in just a little under 3 weeks, no mean feat for any young artist, and even more so for a Singaporean, showing just how far and wide-reaching Yung Raja’s reach and fanbase is, to Malaysia, Singapore and beyond. Directed by Jasper Tan of Vadbibes, Yung Raja credits the creative direction and ideas almost entirely to him, saying: “Jasper also shot the video for ‘Mustafa’, and he’s this crazy guy whose mind is so unique, so one of a kind, and filled with so many out of this world ideas. Working with him on ‘Mustafa’ was a collaborative effort, and with ‘Mad Blessings’, we understood how he works better, and just told him ‘bro, go crazy’.”

“He heard the song, and told us he knew what he was gonna do, and just started spinning out all these ideas off the top of his head. We were wowed, and went ‘how did you come up with that?!’ So on the shoot days, we watched all these ideas come to life, and then that was that!” he says. “You’ve got Bharatanatyam dancers, something we wanted to do for ‘Mustafa’, where we would film in the actual shopping mall and the dancers would start dancing in the aisles. But we had to shelve that, so we were so happy we got a chance to insert that idea into this video instead. I really love his work, and I hope I’ll keep working with him going forward.”

Even Yung Raja’s parents feature in the music video, turning in remarkable performances that add a level of authenticity to it. “My parents have always been so supportive of everything I do, and since I started doing music, they’ve been trying to be more and more involved in all that I do,” he adds. “My dad asks me every day what shows I’ll be filming for, where I’m going, like ‘thambi, are you flying anywhere anytime soon?’ So when I told them I was shooting a music video, my mum came in and shamelessly asked if they could be in it. Of course I said yes!”

All great artistes start from somewhere, and for Yung Raja, that realisation started when he was a teen and discovered rap music. “You know how some people have weird talents, like being able to touch certain parts of their body or roll their tongue? I could always rap since I was about 13, like Eminem or the other rappers at the time, and I ended up pursuing it as my hobby for the longest time,” he explains. “At 16, I started posting some of my raps on Soundcloud, and my best friend Fariz Jabba told me straight up he thinks I have what it takes to do music professionally. It’s something that never crossed my mind, and with Fariz, I now had someone who could be my ‘partner in crime’, someone to pursue our dreams together, and finally, I thought ‘oh, this could be something.”

“So eventually, we started getting feedback from people who saw videos we were posting on Twitter, and it’s just been this slow process of self-discovery from there on,” he adds. “If it wasn’t for Fariz, I might never have started music at the time, and it means so much to me that it was something he did for me, a friend. I’ve been travelling around so much since, and getting so much work.”

With regards to his unique style of music, infusing Tamil into English and vice-versa, Yung Raja speaks of his early days of being influenced by American rappers. “I started out trying to imitate them, and trying to be like them, adopting the lingo, and subconsciously widening and hardening my skill set,” he says. “And then I realised that rapping in English wouldn’t be the truest representation of who I am. So that’s when I got the idea of adding Tamil into my songs, and the more experimental I went, the better I got and the more it flowed.”

“There came a point where I’m sitting down and it became so natural to just think of lyrics in Tamil and English, and I realised no one else was doing it the way,” he continues. “That’s the trigger point for when I decided I wanted to put this style out into the world. Sometimes I’d ask my mum and dad and my whole family for ideas for lyrics, and even they’d get involved in the writing process. I got a lot of encouragement from my Tamil-speaking friends and gained more belief in myself. It’s been a very exploratory journey, and I still have times where I’m unsure and uncertain about myself, but I just go at it, knowing that I don’t have any reference points and that I’m doing something different from all the English rappers or Tamil rappers out there, who I do get inspired by and look up to.”

“I think I’ve found my sound and my style, but this whole thing is still very new not just to the world, but also to me. I do have to think about my work several times, pen it down and work on it before recording it. Maybe it’s like what they say, where you need to work at something for ten thousand hours before getting good at it, and maybe in 10 years, I’ll reach the level of mastery over this I hope to have. But for now, it’s still very much a fun, experimental, and very joy-filled process.”

With the signing to Def Jam SEA, Yung Raja assures us that he’s working on plenty of new material, and hints that an EP or even an album might be on its way sometime in the near future. “We’re still figuring out when’s the right time to release one, and an album is of course, something I’d personally like to have,” he says. “For the brand Yung Raja, it’s something we’ve been trying to push to a place and hope to reach where it can inspire, empower, and set a great example for all those out there. Back when Fariz and I were doing it, we kept hoping to get people to help be the backbone for us, and eventually, we did, with Madeyoufamous and FlightSch and now Universal Music, that’s when things became real. I want to become someone like that, for someone else out there who wants to make something of themselves, and every step we take has to be in line with that vision.”

As much as he’s blowing up, Yung Raja assures us that he’s staying in Singapore for now, and believes that all these things happening are only going to keep happening, forever thankful. He concludes: “I believe that even staying in Singapore, it’s completely possible to make it big. All these things that’ve happened to me are all beyond my imagination, and to make it big, it’s not like the only path is to go to America and find a producer. I’m still floored by how many opportunities are being presented to me, and I’m sure that I can find international popularity even while based here. It still feels like a dream, looking at all these people I’m surrounded by every day, all the stuff that I’ve witnessed, and I am just so so grateful for it all.”

0 comments on “Music Is: An Interview with Local Rapper Yung Raja”