Held in conjunction with the National Gallery Singapore’s Light to Night Festival, over two weekends, the Arts House saw visitors from all walks of life spill over from the Civic District to the premises, taking in the multitude of programmes the venue had programmed for Prologue – the Arts House’s very first festival of 2020.

In our experience of Prologue 2020, we were welcomed at the entrance with a flurry of activity, not just from the projection mapping on the Arts House’s facade, but their own exhibitions, from open books: The Worlds of Haruki Murakami to a a Pop-Up Bookstore by Booktique and Closetful of Books. As for us, we got straight to experiencing the performing arts events, each one a part of a series of works that would go on to show at the Arts House in future programming (thus, a ‘Prologue’ to the rest of the season). 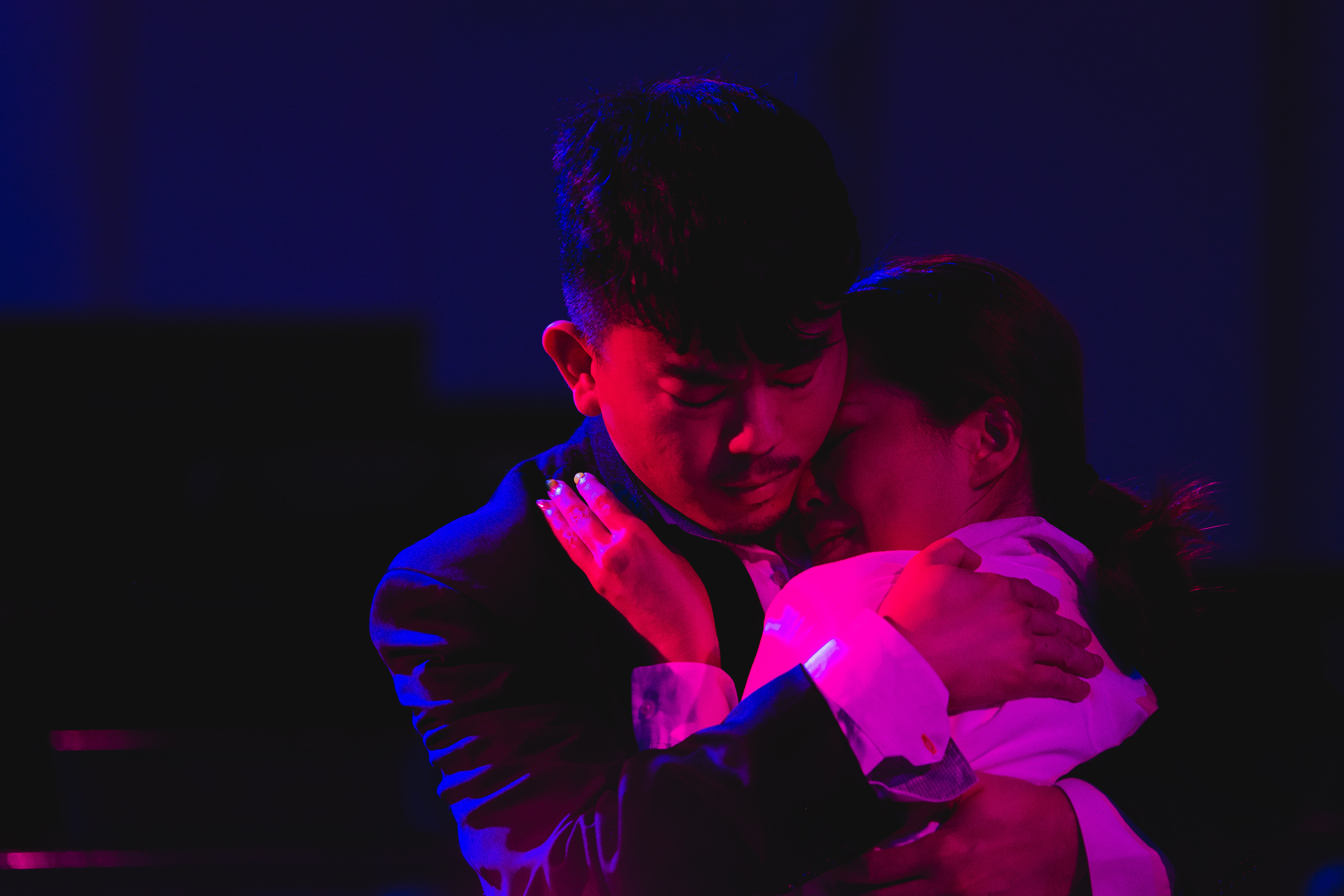 In By Candlelight, some of Singapore’s finest operatic talents came together to perform Fidelio, Beethoven’s only opera. Featuring select scenes and numbers that brought the opera’s length to a very manageable 60 minutes, Fidelio follows the brave Leonore, who disguises herself as a prison guard named “Fidelio”, who rescues her husband Florestan from prison.

Championing the power of love triumphing over injustice, the opera felt appropriate in our current world of chaos and fake news, where the truth will set one free. Directed by Moira Loh, with Pamela Krakauer on the piano, we opened with Jaquino (tenor Jonathan Charles Tay) and Marzelline (soprano Joyce Lee Tung), displaying a strong amount of sexual tension between them. Hearing someone at the door, they scramble to open it, meeting Rocco (bass David Tao Chen Ming), a prison guard who stamps his authority. As Rocco and prison governor Pizzaro (baritone Alvin Tan) came together, their strong onstage chemistry helped set their characters and character relationship well, understanding how to bring the tone across. 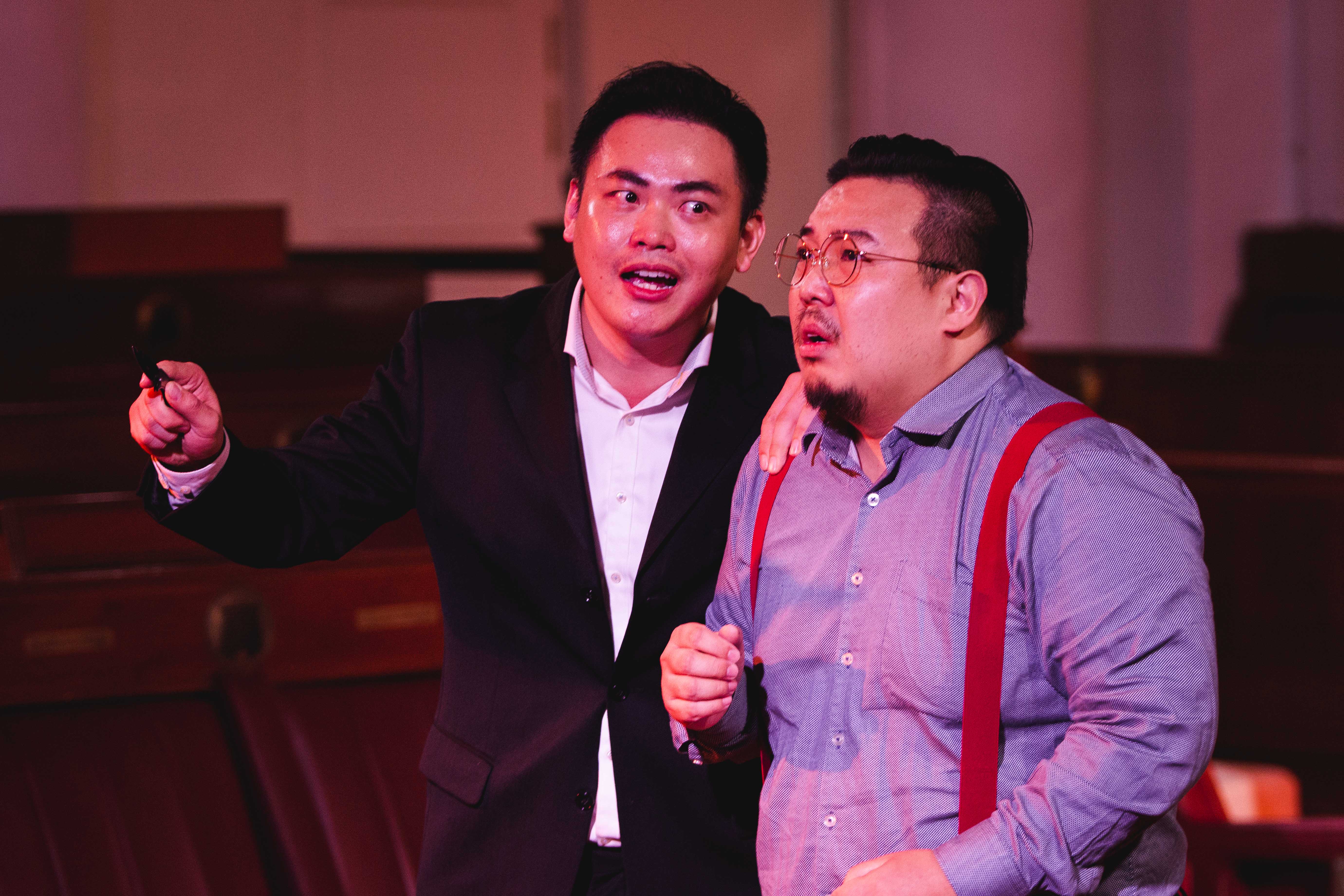 We turn to Leonore (soprano Felicia Teo Kaixin), alone and lamenting the situation she’s found herself in, and expressing her desire to free her husband Florestan. Dressed as ‘Fidelio’, she makes her way to the prison, where Florestan (tenor David Charles Tay) is lying there, mustering strength to express himself, as he exclaims how dark the prison is. Evidently showing us he is a fighter as his voice crescendoes throughout the piece. While the lyrics reflect his loneliness, it is further emphasised with how his voice warbles with desolation and sadness.

It is at this point that Leonore and Rocco enter, and seeing her husband’s pitiful state, Leonore is tempted to unveil her identity and comfort Florestan, showing plenty of trepidation in her facial expression alone, ultimately resisting. Pizarro reveals a truth that prompts Florestan to move to kill him, yet as much as he wants to, finally bows to compassion and chooses to spare him instead, restoring our faith in humanity that not all is blood and violence. As Florestan, Leonore, Pizarro and Rocco begin singing at the same time, we realise how smart Beethoven’s composition was, where one could still make out each singer’s individual voices, loud yet full of clarity. 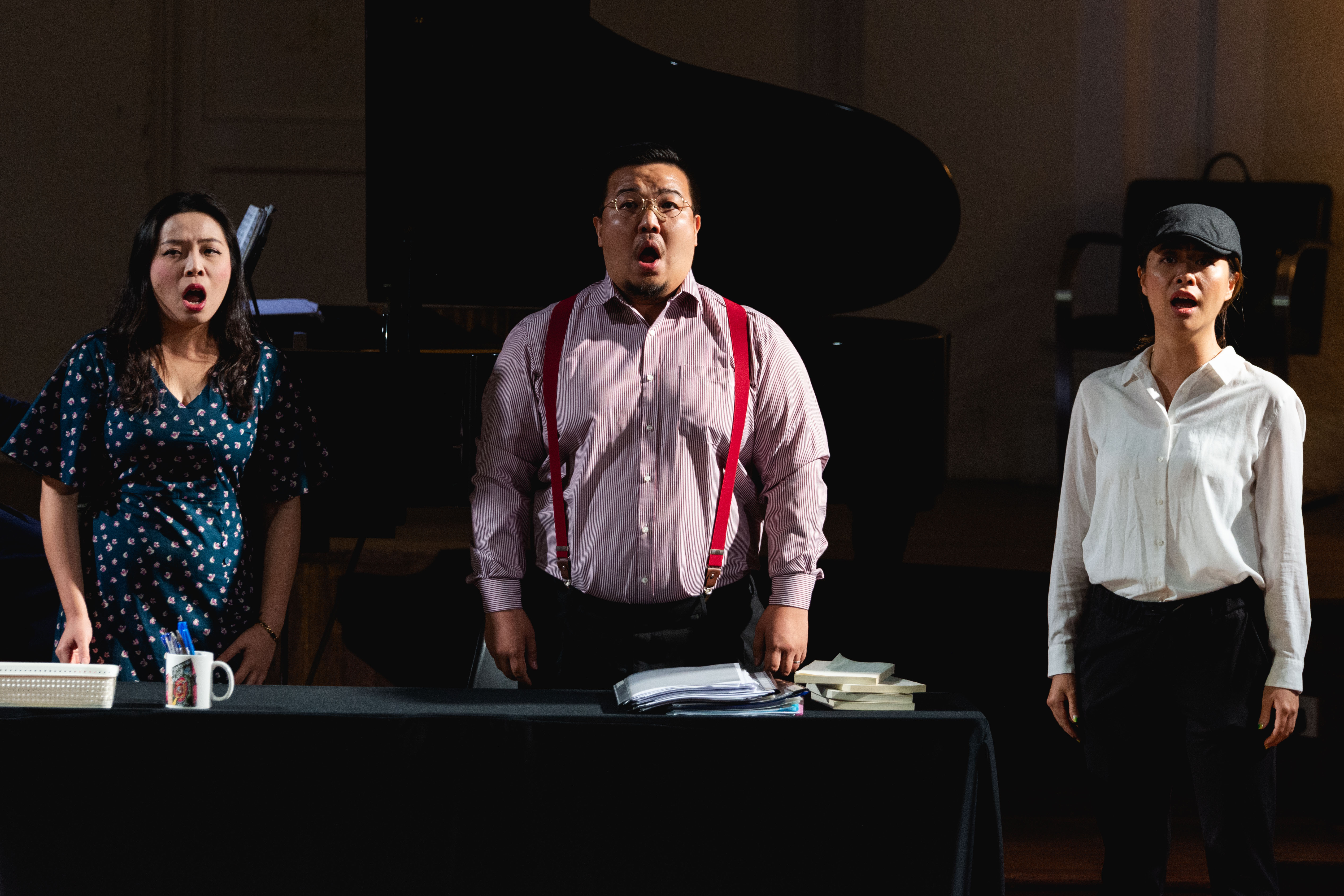 While Fidelio is the only opera composed by Beethoven, it’s a strong showcase of his musical prodigy, telling lifelong truths about the importance of fighting for who you love, and worthy of a piece to celebrate his 250th anniversary. It takes a strong group of performers to bring out all these nuances and capture the essence of this work properly, and this production of Fidelio has done it. Each singer has been given enough time to showcase what they are capable of, and being played in the Chamber, had some great acoustics to help out.

Being seated at the top of the Chamber looking down was also an inspired choice, as the actors sing upwards pleading their case, it feels almost as if we the audience were a jury panel looking and and “judging” them, in line with the opera’s themes and setting. Their voices reverberating around the space, one could feel the strength and weakness of each character clearly emoted each time they sang, and for anyone coming in to witness this performance, it was clear to see how much talent is within these performers. We’re looking forward to seeing even more from them, whether in future editions of By Candlelight or in other performances. 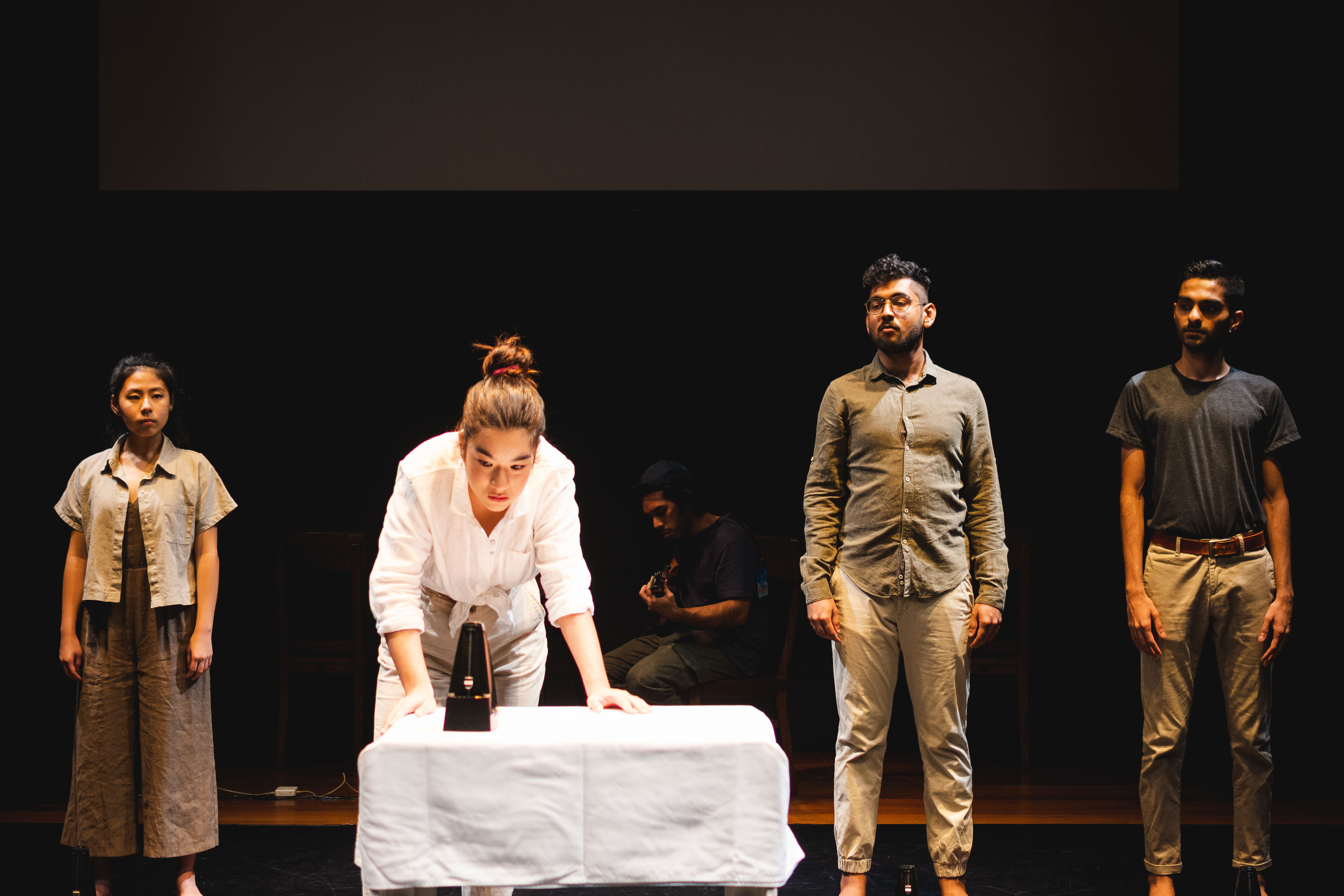 In Note For Note, The Arts House attempts to present poetry in a new form, with past editions having brought together poetry and music. This time however, in its 5th edition, curator Marc Nair has collaborated with theatre director Cherilyn Woo to bring poetry to life via theatre. Bringing together young actors Victoria Chen, Tia Guttensohn, Krish Natarajan and Vignesh Singh, Stop, Look and Listen takes 16 poems and adapts them into a dramatic form, with sound artist Bani Haykal having crafted a sonic landscape that blends city sounds with music mixed live. Using a metronome to set the tone and timing for each piece, the actors quickly got into the rhythm of each poem. Capturing the essence of living life in Singapore, the performance brought us on a journey down the quiet parts of an otherwise bustling city, stopping to peer down alleyways or less familiar roads. 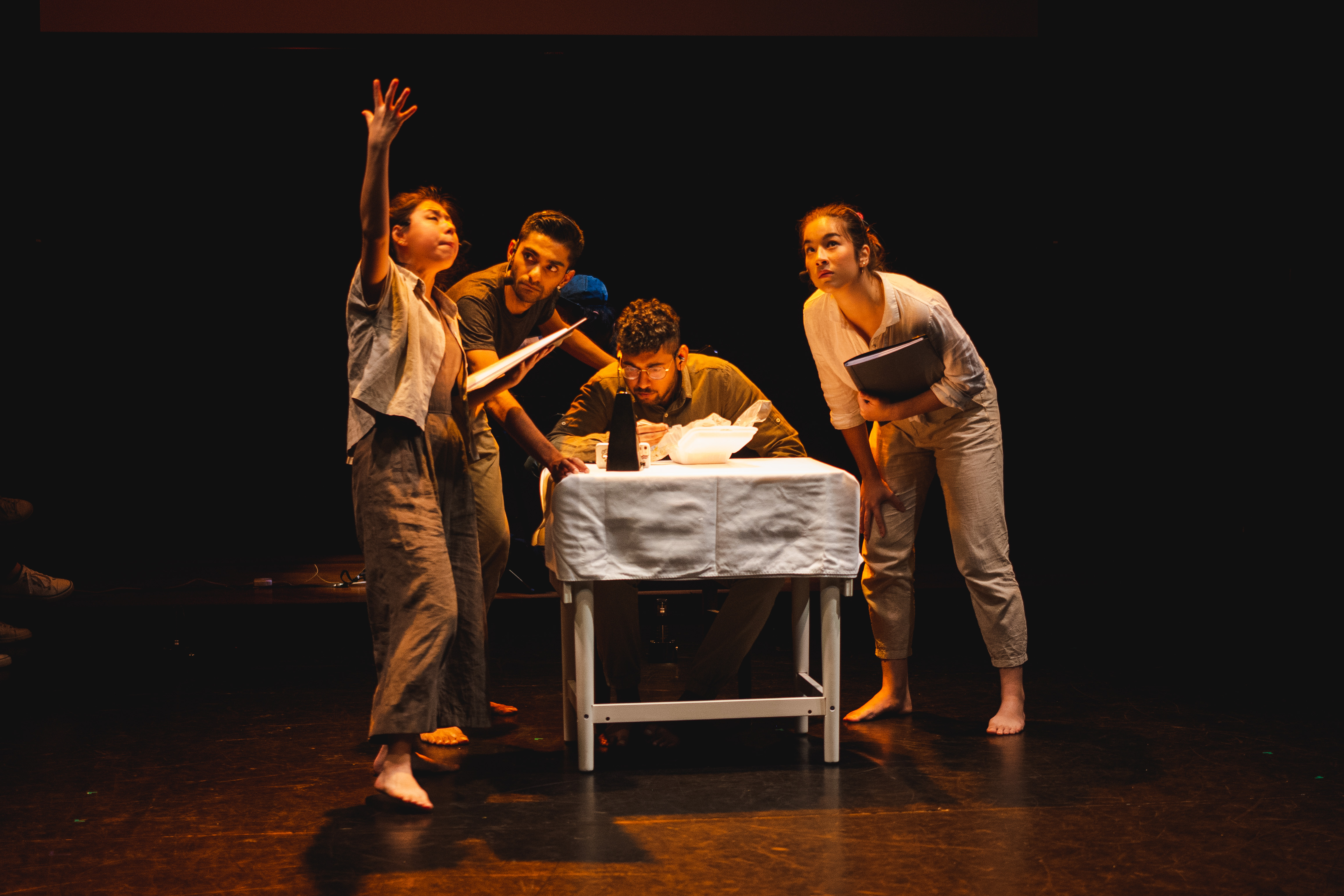 Poems included Aaron Lee’s ‘The Way Things Are’, Jasmine Goh’s ‘Becoming Again’, Samuel Lee’s ‘First World Grocery Shopping’, Deborah Emmanuel’s ‘Anti-Establishment Poem’ and Crispin Rodrigues’ ‘Pasar Malam’, among others. Most delightful of all was Stephanie Chan’s ‘When The World Ends You Will Be Eating Hokkien Mee’, where the entire collective came together and everyone was given a part to play – even Krish ended up eating real Hokkien Mee, making this an especially fun piece. A refreshing way of experiencing poetry, Note for Note continues to make the literary form less daunting and more accessible to the masses, exposing young audiences to local poets and their fine writing.

A Novel Idea: The Handmaid’s Tale/Of Mice and Men 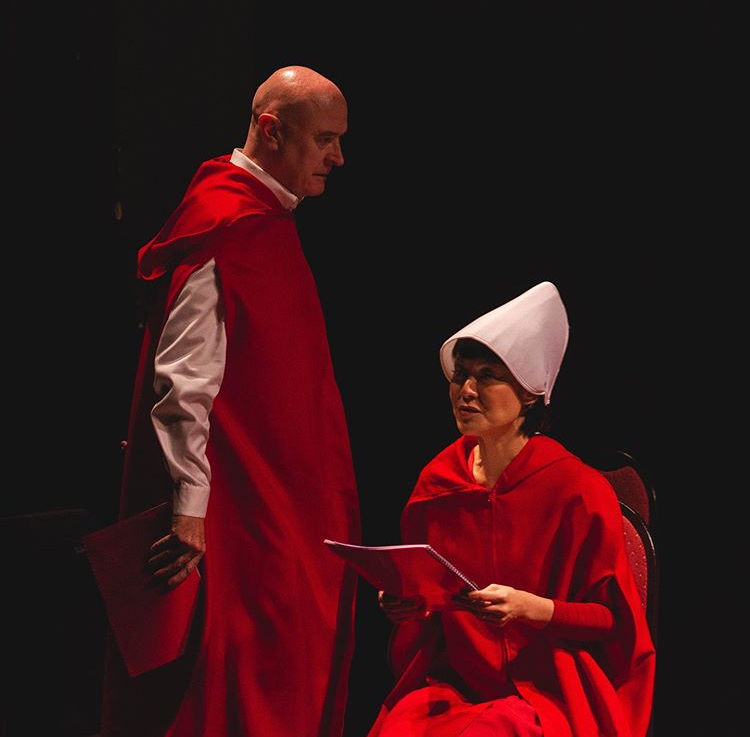 Finally, in A Novel Idea, held on the second weekend, we watched as Samantha Scott-Blackhall brought back her ever-popular performance, where two actors perform dramatised readings of famous novels. This time around Scott-Blackhall reunited with Daniel Jenkins and Janice Koh, with audience members given a choice to vote between Margaret Atwood’s The Handmaid’s Tale and John Steinback’s Of Mice and Men. 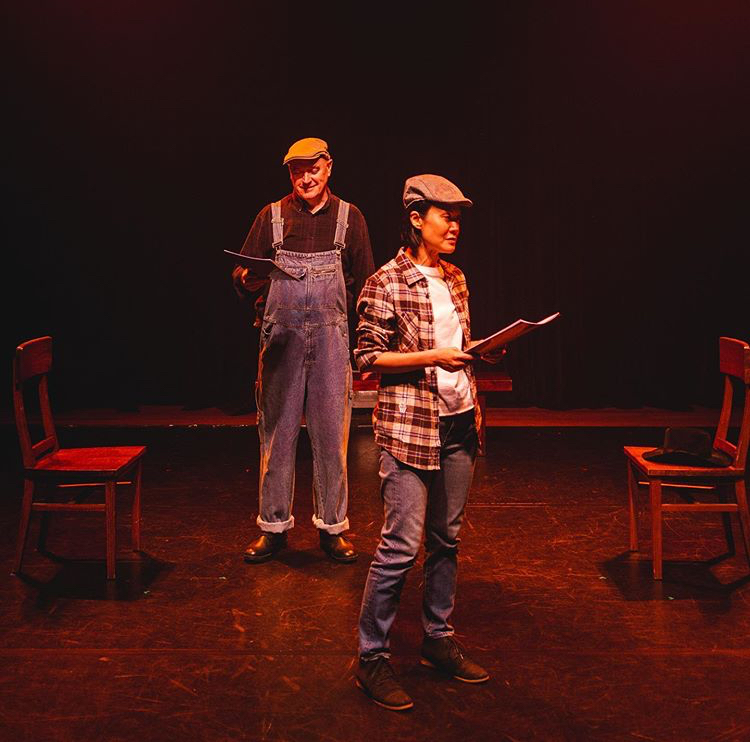 In our performance, Steinback won out, and both Janice and Daniel put on their flannel shirts and overalls before taking us to the post-Depression American South, putting on accents as they performed select key scenes from the novel. It’s impressive how the curation works such that even for someone who’ve never read the novel before and with a sparse set, the characterisation and relationships are made clear, with plenty of humour and drama throughout. Ending on a cliffhanger at one of the most climactic scenes, we were told to read the novel to find out what happens next, encapsulating Arts House’s status as a literary hub and successfully bringing the act of reading back to the programme.

Prologue, as a whole then, offers an accessible lineup of teasers and tasters for audiences to find out what the Arts House and their upcoming season is all about. Celebrating local and international literature across a variety of forms, while playing off and complementing the hype and good vibes of the surrounding Light to Night Festival, Prologue 2020 felt like a success, leaving visitors more curious and willing to find out more about the literary arts, but above all, having a great time with the diverse line-up of  intimate programmes for all.

Prologue 2020 ran from 10th to 19th January at the Arts House. For more information, visit their website here Other editions of Note for Note, By Candlelight and A Novel Idea are also set to play at The Arts House at various other points during the year.

The Arts House’s next major event will be Textures 2020, taking place over one weekend from 13th to 15th March 2020. Stay tuned for more details to come.