The Arts House has been a key part of the Civic District for years now. But for a lot of people, although it’s recognizable enough as a heritage building, who exactly are the people behind it, and what do they aim to do?

Originally known as The Old Parliament House Limited, the organisation was rebranded as Arts House Limited (AHL) in 2014, and its responsibilities extended beyond the Arts House to include managing the Victoria Theatre and Victoria Concert Hall, along with running Goodman Arts Centre, Aliwal Arts Centre, and the Drama Centre. AHL also programmes and presents the annual Singapore International Festival of Arts, which returns this year from 15th to 31st May.

With this many venues and spaces under their charge, it’s a wonder that all this is managed by a little under 100 staff, from programmers to technicians, administrators to communications. But beyond their role as managers, AHL is fully aware of how important each and every one of their venues is in growing the local arts scene, and aims to fully utilise them as a bridge between artists and audience.

AHL CEO Sarah Martin knows this better than anyone, and glows with immense pride as she describes the full suite of missions AHL has taken upon themselves to achieve. “AHL acts as an intermediary between audience, artists and spaces,” she says. “We have a few key pillars that we’re looking at, such as place making, taking a grander role in the civic district, and festival making as a means of providing platforms for artists.”

“With our venues, we also work together with the National Arts Council to provide subsidised housing for artists, and help run the performance venues and rehearsal spaces associated with us. We’re also looking into how we can contribute to more capability development, act as a support system for artists, and in general, figuring out how we fit into the overall SG Arts Plan, and how we as AHL can do more.”

How exactly does AHL contribute to the arts scene then? “In terms of our interaction with artists and potential collaborators, we’re never shutting the door on anyone or any ideas they might have,” says Sarah. “It’s important to start a dialogue so that we know best how our venues can best serve our artists, and for them to understand the availability of our spaces. We offer everything from short term hires to project studios, and we open our spaces to all kinds of artists.”

“Our focus is really about building different communities through our spaces and programmes,” says Sarah. “Individual artists each have their own methodologies and forms of outreach, and these are things they manage on their own, alongside their own productions, schedules and other contributions. On our end then, we work on helping market where we can, and attempt to amplify our artists’ efforts. We’ll eventually be having an overall AHL website as well, where all our venues and spaces will fall under one umbrella site.”

“There’s still so much room to grow as we continue to contribute and collaborate as we build communities of both artists and audiences and help push some of this development forward,” Sarah adds. “And then there’s the need to change perceptions, and get people intrigued and passionate about the arts. It’s been an exciting ride, full of constant change and evolution, a ride that we’re still on to this day. We’re still responding to all the changes in the arts landscape, and developing alongside it.” 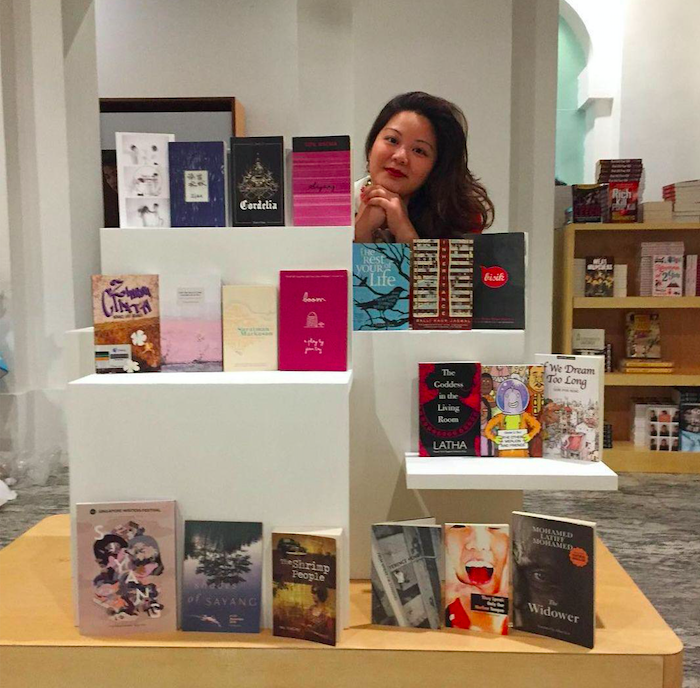 And to learn more about AHL’s programming, who to speak to than Lisa Lip, Senior Manager of Programmes at AHL and Producer for Textures 2020. “Programming isn’t always as glamorous as what people think,” says Lisa. “It’s a mixture of research, keeping yourself updated with what’s happening in the community. It takes a little luck and gut instinct, and a lot of emails, phone calls and meeting on a day to day basis. I do it because I like having conversations with people and artists, and because AHL is such a young organisation, you really feel like you’re helping shape the scene and all that they’re doing.”

Easily recognizable by her colourful clothing, funky accessories and spunky personality, Lisa emphasises the Arts House’s move towards firmly establishing itself as the literary arts hub of Singapore. “Literary arts is exciting in its own ways, and a lot less entrenched in the way that it’s programmed,” she says. “Especially with the rise of the Singapore Writers Festival, it’s starting to see growth again, and slowly, people are really starting to see what we’re doing in making the Arts House a literary arts hub, going beyond just being a heritage building to becoming an established arts space.

“As a producer, we have to be proud of the things we make, and take responsibility for how our programmes have the potential to help artist development and growth, and always be passionate about what we produce,” she adds. “While I wouldn’t say we’ve really pushed the programming so far yet, I think what we need to do is find this safe space and access point for people before going deeper, or having more difficult conversations. We have to make sure there’s a way in for people at various levels of exposure to the arts.”

“Take Lumination for example, where after its first edition, we already saw new people coming in. They were first attracted to the topics we raised during the programme, but weren’t really aware of the Arts House and what we did. In a similar vein, for Prologue, we did have people coming in despite the general chaos and activity outside during Light to Night Festival, and people discovered that we were a space where things were happening, but a little more peaceful while still being able to hold our own with our programming.”

Accessibility is at the heart of AHL’s programming, where not only must content appeal to audience members at various levels, but also in terms of affordability. That’s where free programmes come in. “Our free programmes are in line with creating that welcoming atmosphere where people want to come down, because there really are people out there who can’t afford to buy tickets,” says Lisa.”Think of these as tasters, where audience members can experience something interesting for free, then when the artists do something ticketed, they’re now aware of the work that they do and might be more compelled to buy a ticket to that as well.”

Even in terms of timings and space, improvements to accessibility and reaching out to new audiences remains at the forefront of Lisa’s mind. “This year’s edition of Textures is a little different, where we worked on more installations that don’t have to all start at 8pm, unlike performances,” she says. “So we had works that people can just come in and engage with, whether visually or aurally, and we’re trying to tear down the barriers they put up for themselves, where they think oh it’s so difficult to stay for so long.”

“One of these installations was by Troy Chin, who most people won’t know unless they’ve read The Resident Tourist, because he’s so low key and doesn’t even have social media,” she continues. “But he does such amazing work, and that’s why we commissioned him to design something for the lawn, with In Universe. And also, we had AJ Low and Drewscape to do an installation based on Sherlock Sam, which is seeing a lot of popularity amongst kids. Both of these are more graphic than word-based, and shows that even in the literary world, you can enjoy works of different forms.”

Even today, AHL is still discovering previously untapped audience members and communities they can reach out to. “When we did Page on Stage last year with Kheng Hua, we suddenly had school groups coming in for bookings, and we realised that we haven’t really tapped on that yet,” says Lisa. “For literary arts especially, I think that the earliest exposure to literature is so important, and starting off with Singlit and stories they can immediately recognise could be so much more impactful than jumping straight into Shakespeare.”

“These days, with a longer lead time, we can plan more and figure out what we’re lacking in,” Lisa says. “We’re currently wrapping up our 2021 calendar, and you can expect to see our main festivities carry on into next year, from Textures to Storyfest, along with our regular series, and trying to be more active as a member of the Civic District. We’re making sure that there’s something every other week at least, so we’ll always have something going on at the building.”

“I’ve been doing this for 9 years now, and even though I don’t have any formal training, I think I’ve grown into the role by keeping my ears to the ground, doing my own research and talking to people,” Lisa concludes. “And most of all, I’m always sincere both when I’m in work mode and off work mode, and I like to think people can pick up on the genuineness. So when I say I respect all these artists who do all they do, putting up a show or exhibition or performance, I really mean that, because I don’t have those kinds of skills. And being a programmer, I guess that’s how I can still be a part of it, and contribute to the arts scene in my own way.”

For more information about the Arts House, visit their website here

1 comment on “The Banter: On Place Making, Programming and Venue Management with Sarah Martin and Lisa Lip”