Concerning itself with an exaggerated version of Victorian high society, where ‘style, not sincerity, is the vital thing’, The Importance of Being Earnest remains one of the world’s most beloved comedies, surrounding the misplaced importance over one’s name and background, characters are exaggerated stereotypes, find themselves in absurd scrapes, forced to conform to unspoken rules of society, and spout self-contradictory lines. But despite how outrageous it sounds, somehow, Oscar Wilde’s most beloved comedy continues to ring true even in today’s world, delivering a sharp, timeless satire of the way we present ourselves.

First staged by W!ld Rice in 2009 to critical acclaim, the local theatre company’s version of the play, uniquely, features an all-male ensemble, adding a distinctly queer overtone to the play, and further playing up the themes of people playing versions of themselves that they are not. The play, in short, follows Jack Worthing (Daniel York Loh), a man who invents a brother named Ernest in order to come up to London, whereupon he assumes this false identity while wooing the beautiful Gwendolen (Chua En Lai). Upon learning of this useful scheme, Gwendolen’s cousin and Jack’s best friend Algernon (Brendon Fernandez) too decides to assume the name of Ernest, and heads down to the country to lavish his affections upon Jack’s own ward Cecily (Gavin Yap). When the deception spins out of control, the unexpected truth that comes out may prove to be much more than everyone bargains for. 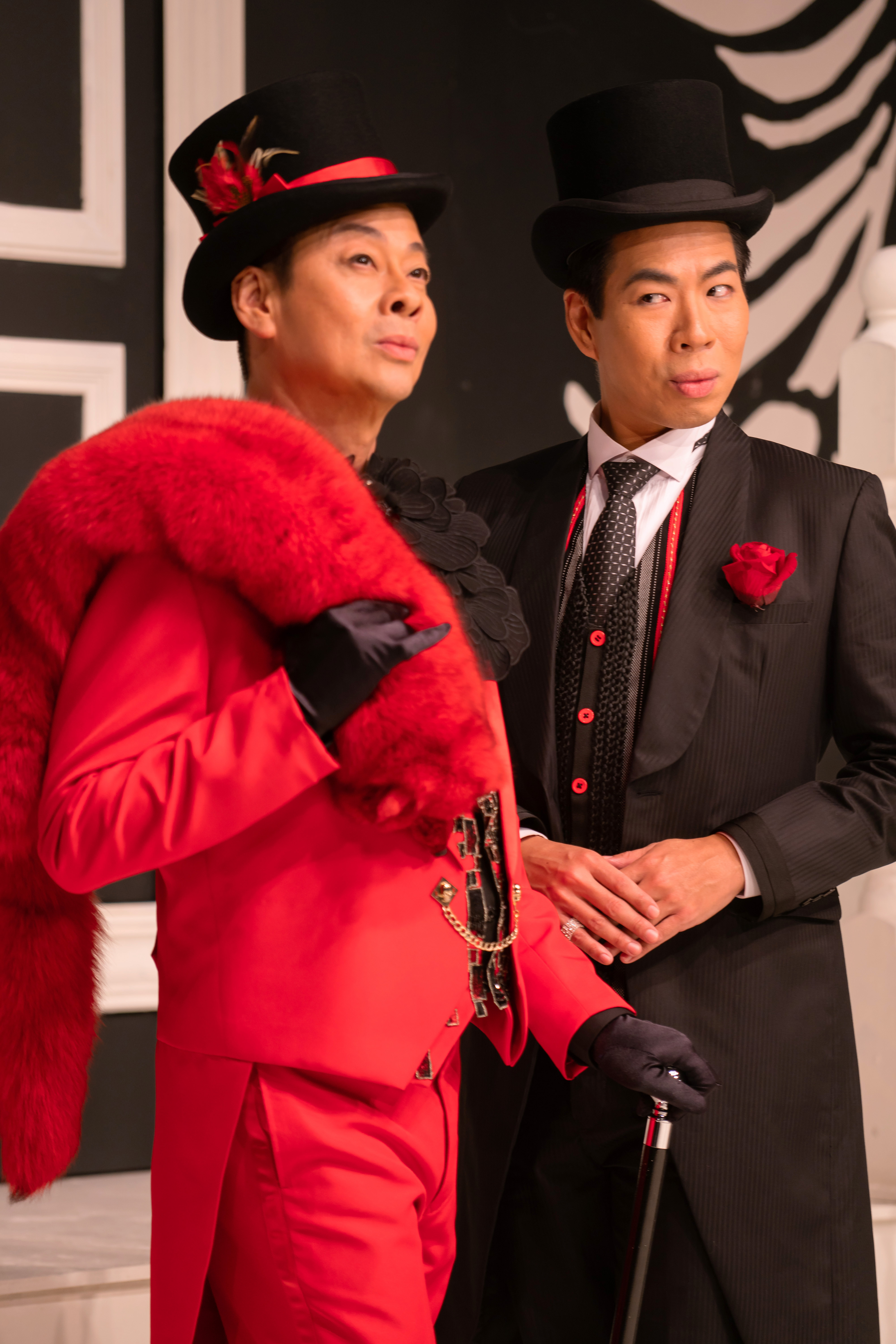 Emphasising the artificiality and pretension of Victorian society, stepping into the Ngee Ann Kongsi Theatre feels like we’ve entered a classy private event, complete with the actors serving cucumber sandwiches to the audiences. Onstage are the newly minted Concordia Quartet, all dressed in smart suits and serenading audiences with Mozart, Haydn and Bach before the start of each act, garnering rapturous applause at the end of each song.

Further adding to the opulence are the actors, dressed in stylish suits designed by Frederick Lee (similarly coloured, but subtly differentiated in their exquisite detail), and a classy monochromatic set by Wong Chee Wai. The intimate space of the theatre feels like the interior of a house, and helps amplify the hysterics and overblown drama onstage. Wong’s set is especially effective in Act 3, where mirrored walls help open up the space and make it feel larger and grander than it actually is, and metaphorically, represent an inability for the truth to remain hidden any longer. All the stops have been pulled out to create the atmosphere of a high society event, and we cannot help but live for its sheer indulgence. 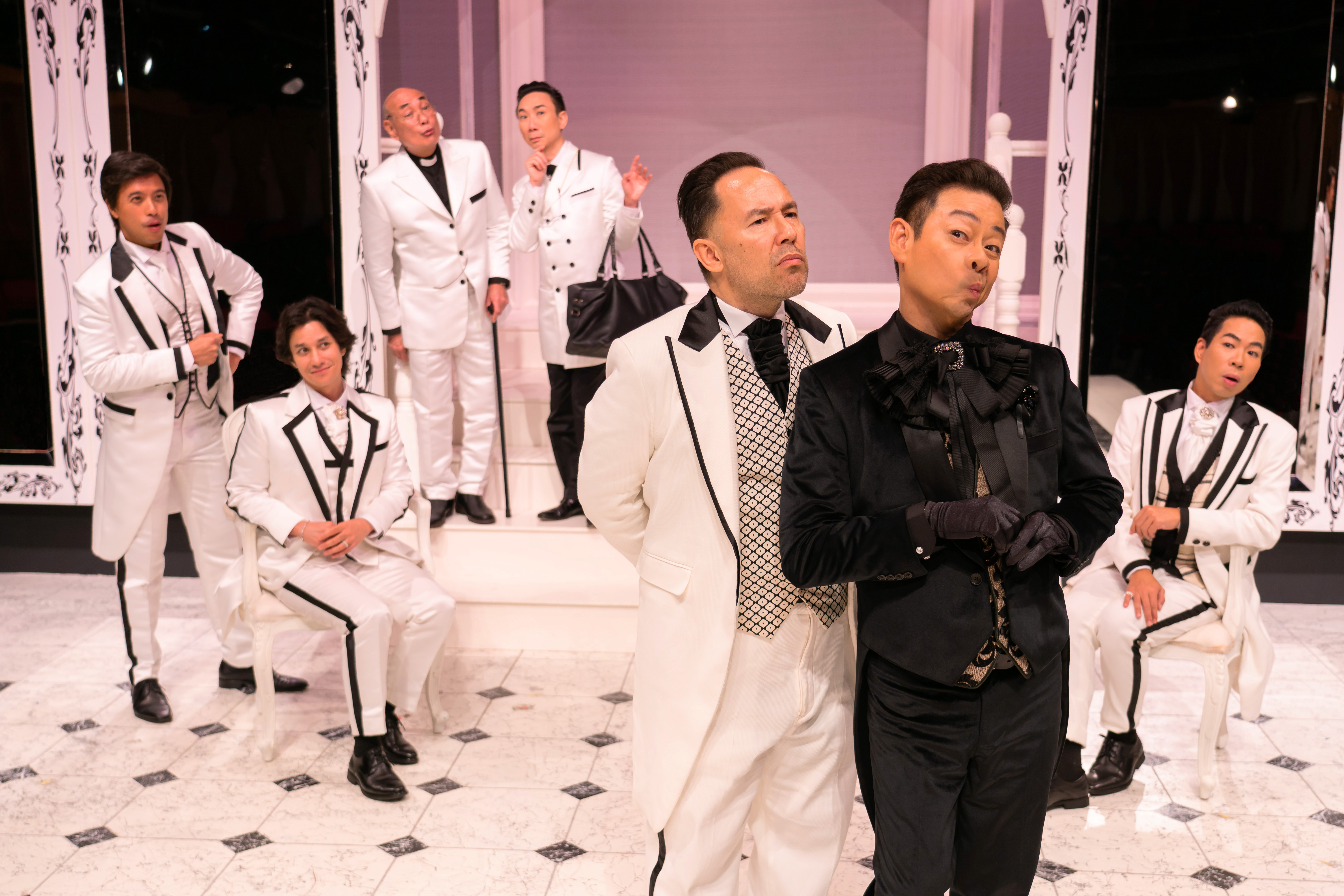 Under Glen Goei’s direction, Wilde’s humour is brought out in full, thanks to over the top performances that showcase a thorough understanding of every line and their intent. The cast languishes in the script, letting every word roll off their tongue, almost as if savouring each one for added emphasis, from playing up the melodrama to making even the most innocuous of lines sound suggestive with the right intonation. Well-placed pauses between lines allow words to linger in the air for extra weight, or for visual humour as characters are left awkwardly hanging. In The Importance of Being Earnest, flirting and fighting are distant cousins, as words are weaponised and the ensemble mines them for double meanings and subtle euphemisms in every scene for maximum effect. 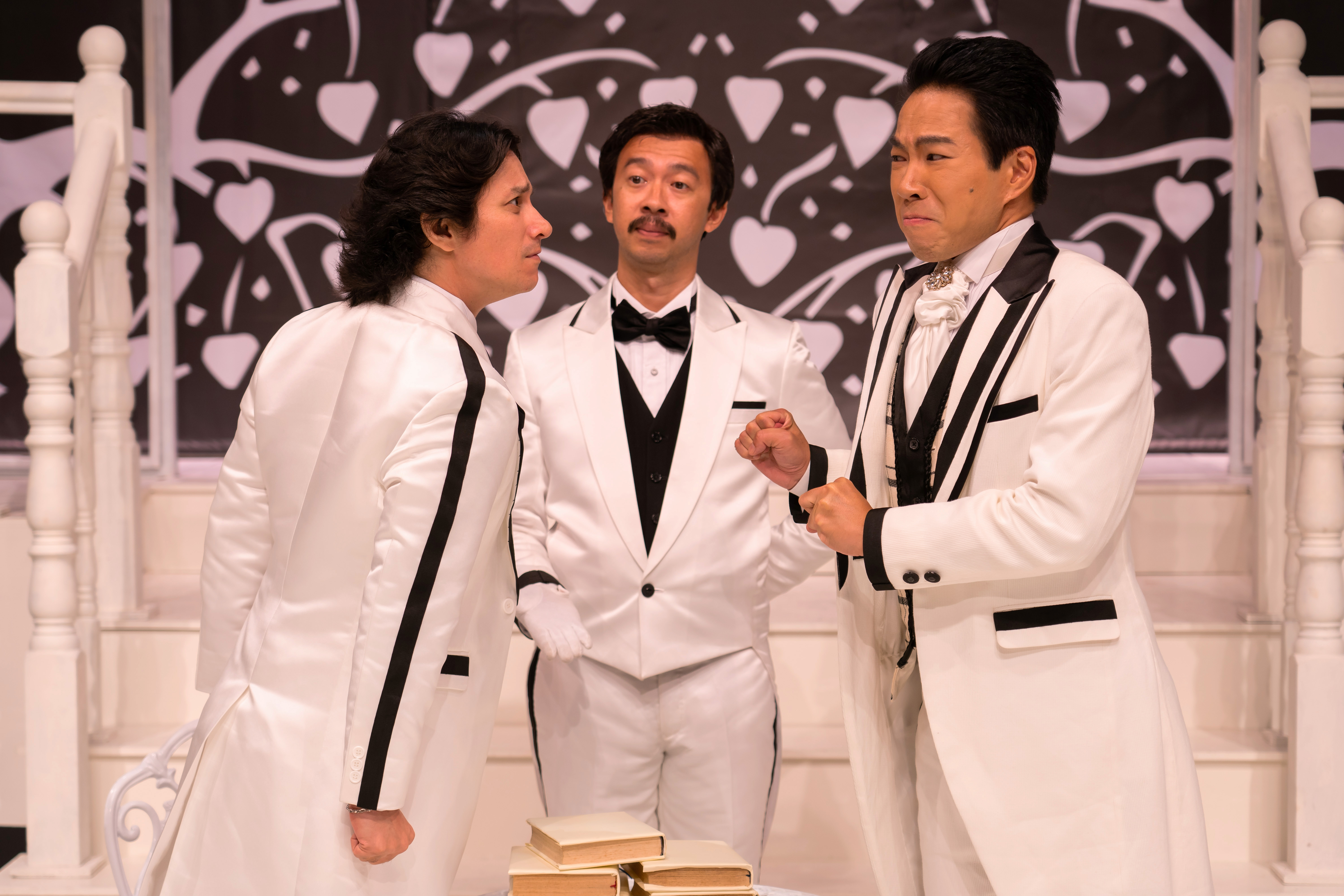 Having been once again assembled for this production, each one reprising their role from every past iteration of the show W!ld Rice has produced, the onstage camaraderie and chemistry between the cast is stellar. Their familiarity with each other and the script allows them to nail their comedic timing with aplomb, playing off each other’s reactions on exactly the right beat to produce a perfectly paced performance. Daniel York Loh, as the posed and controlled Jack, maintains a tenuous brotherhood/rivalry with Brendon Fernandez’s loud, overenthusiastic Algernon throughout the show, and each time they outsmart each other is cause for laughter. Chua Enlai, as Gwendolen, tempers her strict etiquette and manners with coquettish giggles and flights of fancy, while Gavin Yap embodies the youthful Cecily with a lightness and innocence in his movements that gives him an air of naiveté.

As for the rest of the supporting cast, Hossan Leong and Lim Kay Siu, as governess Miss Prism and Reverend Chasuble, leave a strong impression behind as contrasting characters very much in love with each other. Crispian Chan’s exasperation as long-suffering servants Lane/Merriman provides a good contrast to the self-centred protagonists, but it is of course Ivan Heng as the ostentatious Lady Bracknell who steals the show with every scene he appears in. Making his grand entrance in a loud red suit, Ivan’s portrayal of Lady Bracknell is the monster-in-law feared by all, commanding attention wherever he goes and dominating every conversation with a mightier than thou attitude. 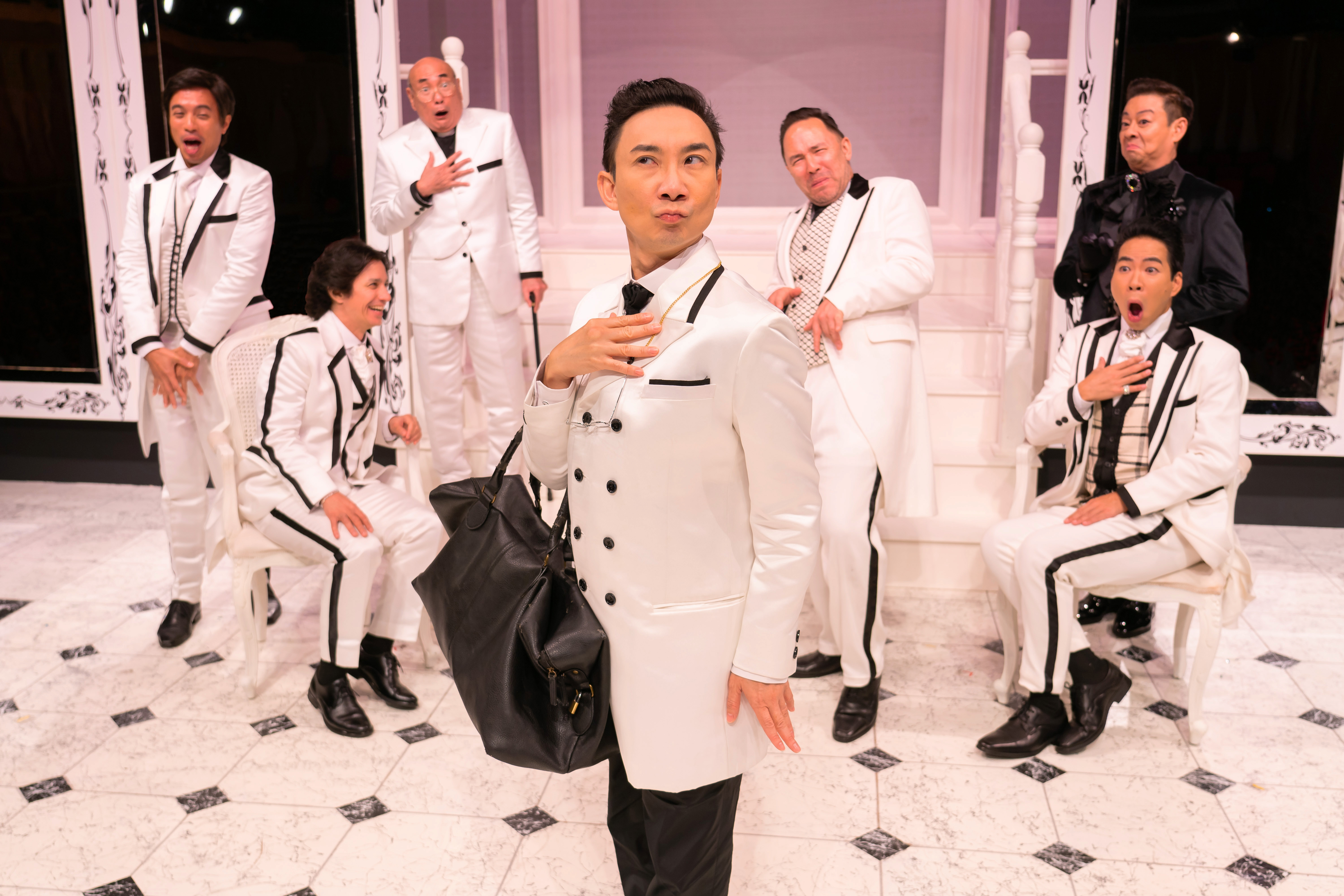 The Importance of Being Earnest is a wild ride from start to end, endlessly quotable, wonderfully cheeky, and swathed in a riotous layer of entertainment and pure joy. But beyond that, in our laughter at these pompous, self-important caricatures of characters, we too recognise the same airs we put on in front of others in an effort to impress them and fit in. Much like the Victorian wonderland portrayed in the play, we see how our modern life still thrives on idiosyncrasies such as ridiculous new trends and of course, the false identities we construct for ourselves, whether online or in real life. As the play draws to a close, there is almost a sense of relief when the truth behind Ernest is finally revealed, and the characters can finally begin to live ‘honestly’ without the need to hide. We see then that the happy ending is achievable only when we too finally understand the importance of being earnest, and live a life as true to ourselves as possible.

The Importance of Being Earnest plays from 7th February to 8th March 2020 at the Ngee Ann Kongsi Theatre @ W!ld Rice. Tickets available from SISTIC