Fresh from a laugh out loud stand-up performance on Valentine’s Day, local comedian and actress Sharul Channa’s is already hurtling into her next performance of 2020. Following on from the stellar character work she’s displayed in Disco Sheela and Other Indian Superwomen (2018) and Crazy Poor Sita (2019, for which she was nominated for a Life! Theatre Award for Best Actress), this March, Sharul is set to introduce audiences to yet another character set to both endear herself to us, and leave her chortling with her sense of humour.

In comedic monologue Am I Old?, Sharul Channa takes on the role of Savitri, a 68-year-old retired school teacher looking for something exciting to do. In her attempt to try stand-up comedy for the first time, it just so happens that you, as the audience, happen to be privy to her first ever show. Come see what this silver fox can do as she lowers her inhibitions, speaks uncomfortably frankly about the truth, and lets all hell breaks loose.

“The original title was going to be The Greying Matter, but was advised to make it more direct and accessible so everyone could understand what the big issue was,” says Sharul. “When I asked for advice from Constance Singam, who is 84 years old, she came up with the title of Am I Old? instead!” 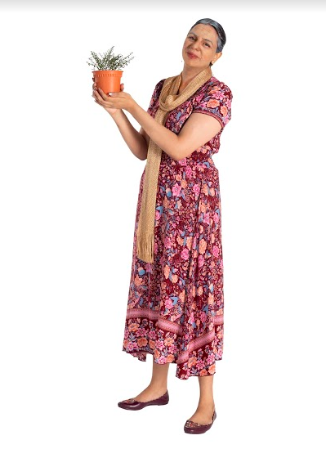 Playing as part of International Women’s Day, and supported by both AWARE and the Singapore Council of Women’s Organisations, Am I Old? once again sees Sharul Channa use her comedy for social commentary, with past shows having tackled topics as wide-ranging as Indian weddings, poverty, femininity and fatherhood. With this new show, Sharul now takes on yet another topic that’s prevalent yet under-discussed – the ageing population, and forces audience members to face some difficult questions dealing with the elderly around us. And similar to Crazy Poor Sita, at the end of each show, there will also be a panel discussion with a member of AWARE, a family caregiver and an elderly person, who will discuss the issues affecting the elderly today.

“I was reading Atul Gawande’s Being Mortal, and it discusses a lot about how the elderly just want to stay in their comfort zone, and certainly not the nursing home,” says Sharul. “In my research, I met so many caregivers and they cry, and I feel that and end up having to cry too. People like Anita Kapoor have been a caregiver for her mum for 10 years, it’s so easy to get caught up in all the emotional stories and have your eyes opened when you read about all the statistics. The purpose of the show then is to shed light on a topic not everybody wants to talk about, and I wanted to tell this story.”

“When a lot of people hit 80, they start asking themselves why are they still alive, and other things like why caregiving is always done by single women?” adds Sharul. “Death and dying isn’t really funny, but as Savitri, she opens up the possibility to make light of such a difficult to talk about situation and make it easier to discuss. When there is a report on the elderly, how many people end up reading and educating themselves on it? It’s really all about education, making people stand up and pay attention, and if you want to create change, that’s the first step.” 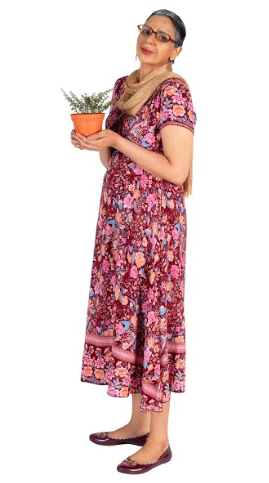 With regards to her preparation for the show, Sharul comments that she has now been preparing for 5 months now, not just with the aforementioned research and interviews, but also in terms of character development. “Preparation doesn’t stop till the show is over, even when you’re onstage,” says Sharul. “To get in the headspace of Savitri, I developed a character history for her, drawing out her education and family background, laying out her fears, insecurities, friends, and what she’ll talk about onstage. It helps me when I put on the costume as well, and with my stand-up background, also helps me play with the live elements and react to the audience, as Savitri. I think that I really need my audience to absorb my character and believe her if you want to have people believe in you and genuinely want to talk about the topic.”

“I named the character Savitri Channa after my own paternal grandmother, after finding out she was a caregiver to so many people. She was so selfless to care for other people, and I wanted to find out what such a ‘job’ entails,” Sharul concludes. “At the heart of what I do, I want to tell interesting stories. But as an Indian girl in a Chinese majority country, and a middle child, I’ve always felt like there are a lot of levels I’ve had to fight for in life. So beyond my stand-up, when I do theatre, I want it to have a message and cause, and find a way of using it to help others, so that they don’t have to fight as hard as they need to.” 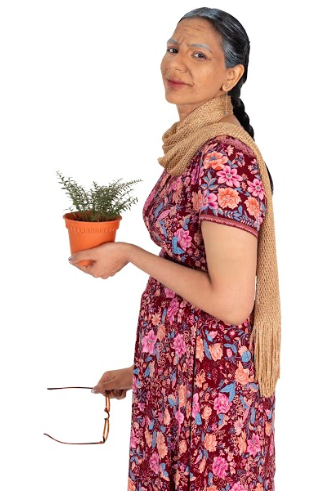 Armed with nothing but her Passion Card and her Merdeka Generation Package, Savitri is an old woman with new jokes, and warns you of some seriously mature content from a very mature content maker. Get ready to get hit with her best punch lines and riotous jokes about unrequited love, being a caregiver, and of course, coming to terms with ageing, as Am I Old? premieres this March.

Am I Old? plays from 6th to 8th March at the Drama Centre Black Box. Tickets available from SISTIC

2 comments on “Preview: Am I Old? by Sharul Channa”