Always curious but never had the chance to catch a Malay theatre play for yourself? Produced by Nur Khairiyah and Faizal Abdullah of Rumah, Rumah’s Solidarity Project is set to present bite-sized portions of Singapore Malay theatre works this May.

The project will showcase extracts from local Malays plays, presented in monologue form. More enticingly, the chosen extracts will be performed by the original performer and filmed with just a smartphone within the confines and comforts of the performers’ own home. The project opens with Johnny Jon Jon’s Hawa, featuring Koh Wan Ching and Saiful Amri, and will follow with Alin Mosbit’s …Dan Tiga Dara Terbang Ke Bulan, featuring Alin Mosbit and Izzul Irfan. More cast and creatives will be revealed in the coming weeks, available on Rumah’s website.

Rumah also hopes that the project acts as a starting point for a more concentrated effort to archive Singapore Malay theatre works, with little more than archival footage owned by the respective companies and a small number of published plays. For Rumah, this project is integral to the future of Malay theatre, to inspire others to take an interest in local Malay works, and to build a foundation of accessibility and documentation of such materials and resources.

With the current COVID-19 pandemic, not only is this a chance to create new works on the digital front, but also take the time to reflect on our fast-paced local theatre industry, and think about the many plays that have been performed, but may have been forgotten. How then do we see these works now, and how do we navigate this new normal of being unable to congregate and create communities? These are just some of the questions that surfaced during the production of Rumah’s Solidarity Project, and issues that Rumah hopes you too will reflect on as you watch and enjoy these monologues.

Rumah’s Solidarity Project will be available from 20th May to 30th July 2020, released every Wednesday and Thursday at 10.30pm. For more information and access, visit Rumah’s website here 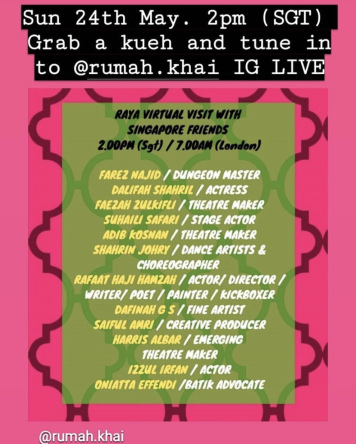 Rumah will also be virtually visiting homes of Malay creatives/artists such as Oniatta Effendi, Rafaat Hamzah, Dalifah Shahril and more on 24th May 2020, 2pm. Tune in and follow their Instagram @rumah.khai for more