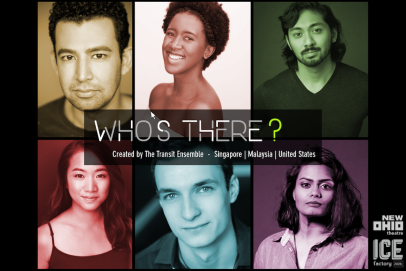 Once the initial trauma of the pandemic settled in and washed over, the biggest question on people’s minds was: what’s next? Even now, months on, it seems incredibly daunting to even consider how we can boldly move into the future, with how we have no idea what lies ahead, or what exactly the ‘new normal’ will look like.

For theatremakers Alvin Tan (artistic director of The Necessary Stage) and Sim Yan Ying (YY), they’ve been taking this strange time not only as a period of reflection, but also, as an opportunity to take their artistry to another level. With new collaborative digital theatre project Who’s There?, the co-directors of the piece hope to address issues of racism and all its complexities amidst this time of global upheaval, isolation and grief.

“At the beginning of the pandemic, I was a little overwhelmed and was happy to just stop doing things for a while, and take a break watching Netflix and drinking whiskey,” says YY, who was previously a production intern with The Necessary Stage (TNS) before pursuing her studies in New York. “But for Alvin, he dove straight into virtual theatre without a break at all, and was looking for a project he could tackle to test the limits of this new medium.”

Who’s There?’s origins started off much more traditionally, with YY wanting to be a part of New Ohio Theatre’s annual Ice Factory summer theatre festival. “I applied to be a part of it, and following the pandemic, they suggested that we do a virtual version of one of my shows. I knew Alvin was looking for a collaborator, and wanted to come on board my project, and we ended up here,” she adds.

Without the need to fly people in or provide accommodation for them, administratively, the process of having an international collaboration suddenly became much easier. Gathering their team comprising artists based in Singapore, Malaysia, the United States and beyond, together, they form The Transit Ensemble, including actors Camille Thomas, Ghafir Akbar, Neil Redfield, Rebekah Sangeetha Dorai, and Sean Devare. Created remotely, YY comments on how at any one point in time, at least two artists are likely to be working on the project, considering how they’re working across five different time zones.

“The rehearsal process was very different from a live performance,” says YY. “We had countless chats with the performers, dug in to each of their characters, and did readings, pair work, all online. There’s this combination of both theatre and filmic sensibilities, along with the technical elements, like virtual backgrounds and how to insert the sound and cues. It’s a whole different ballgame essentially, and how the performers all have to be their own crew members, because they have to handle their own mics, costumes changes, and know when to turn their cameras on and off.”

“We were very much on the same page, with BLM happening in USA, and talk about race and racism still happening in Singapore,” says Alvin.” It was a very short gestation period compared to TNS’ usual 3 phase style, but over a long Zoom conversation, YY and I were in agreement with the themes and questions that the play would raise.”

More specifically, Who’s There? draws upon the artists’ life experiences, while questioning, educating, and challenging one another to work towards the common goal of confronting complex racial issues across the globe. The theatre piece itself weaves together four disparate tales; a black American influencer accuses a Malaysian bureaucrat of condoning blackface; a Singaporean-Indian teacher launches an Instagram feud calling out racial inequality at home, post-George Floyd; a privileged Singaporean-Chinese activist meets a compassionate White Saviour, and an ethnically ambiguous political YouTuber takes a DNA test for the first time.

“In the quarantine period and re-opening, there is so much reflection going on, as we’re defamiliarized from a normalcy we’re used to,” says Alvin. “It allows us to reimagine a different world when we come back, and what kind of environment would support more equitable race relations. And at the end of it all, you ask yourself: who’s there? Or rather, who will be there in this new normal, or who becomes the privilege or the oppressed. There’s a lot of food for thought, for structures to be dismantled and re-imagined, and quite simply, it takes a long time. Sometimes, rather ironically, I think that people are rushing to go back to the old normal, but not really thinking about how we can push forward and reconfigure the future.”

“Race is a difficult topic, and we wanted to broach these uncomfortable conversations, and approach the complexities that they hold,” he continues. “For example, while YY is a privileged Chinese woman in Singapore, when she moves to the USA, she becomes a minority and a foreigner. The context is so different, and these complexities are things we attempt to bring to the fore in Who’s There?”

“Conversations are social justice are necessary, but often fall into very convenient categorisation, and ends up being very binary,” adds YY. “We want to highlight the problems of oversimplifying these issues into black or white, and how people can’t easily be seen as ‘just’ a victim or an oppressor.”

Speaking about their collaboration as co-directors, despite their difference in age and experience, YY and Alvin get on well, each learning from the other as they apply their respective directorial and managerial styles to the project. “Working with Alvin, we’re constantly making new discoveries in the rehearsal room, maybe because of the nature of the process, and how we never go ‘home’,” says YY. “We’re able to have a long conversation, and a long silence, and I think our working style complements each other’s, and we really play off each other’s ideas and methodologies. Alvin never speaks to me like I’m younger or more inexperienced, and we inherently trust each other to adapt to the process and go with the flow.”

“YY has a millennial confidence while I have old-fashioned humility,” adds Alvin. “She pushes me in ways that I’m usually quite modest about. Truth be told, I’m learning a lot from her, because her point of view is so different from my own, and it’s refreshing to have my usual style of working challenged.”

With the new medium in place, both YY and Alvin see this as an opportunity to go full throttle into the future, exploring as many possibilities as possible and developing a methodology together they could both use for future digital projects. “Performance on a Zoom medium is challenging, because it’s hard than ever to achieve intimacy, especially with the short attention span we have these days,” says Alvin. “But there’s also a lot of people who condemned the style before even giving it a chance, and I actually think we should stay open-minded about the possibilities it offers, like how it becomes easier to address cross-cultural issues. If people don’t know about a certain culture, we can provide links to give viewers more information immediately, as opposed to waiting till after the show to search it up themselves.”

“This is very much a new medium, and one we’re keen on exploring further,” YY adds. “I love how it feels like a great equaliser. It’s important for smaller groups to strike while the iron is hot, and see Zoom as a kind of poor theatre, and everything we do is really on a budget and focused so much more on the storytelling elements, and the foundations of theatre without relying on big budget set pieces or spectacles. I’d like to think that even in the future, we’ll continue to put up digital performances, every once in a while, beside live theatre, as a complement and certainly not a replacement.”

How then will Who’s There? address not just the explosion of issues that have erupted during the pandemic, as the lines of race, class and gender bleed into one another, while pushing Zoom as a medium to its limits? Join Who’s There? this August, and watch as these diverse artists seek to explore the new normal in all its complexity.

Who’s There? will be presented online via Zoom from 4th to 8th August 2020. For more information, visit their website here

0 comments on “Preview: Who’s There? by The Transit Ensemble”