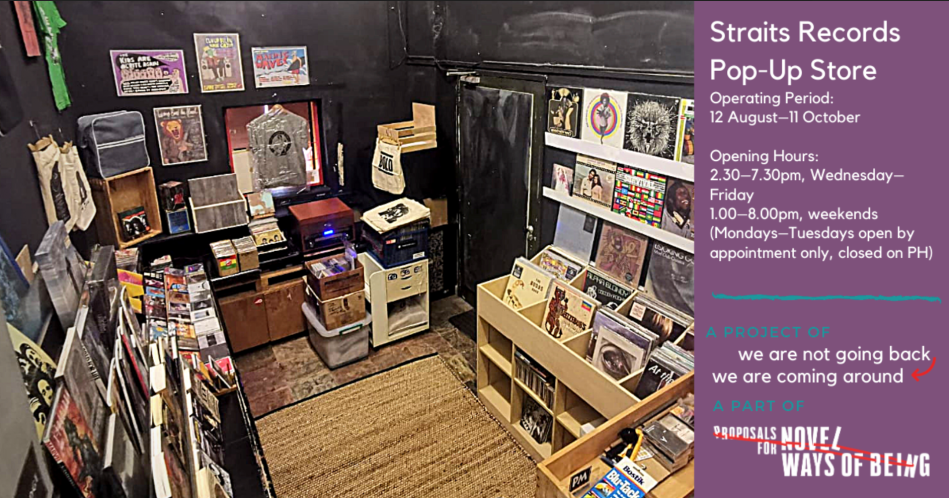 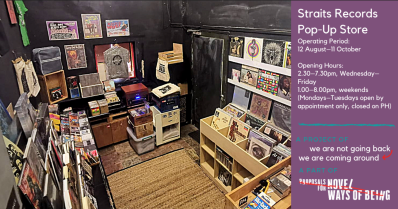 For longtime supporters and lovers of local indie music, the name Straits Records is likely to ring a bell. A distributor of local and regional music since 1995, it was perhaps at its peak while it was operating as a brick-and-mortar store along Bali Lane. But since then, with rising rent, it’s lost its shop front, with owner/founder Ridhwan Ghany aka ‘Wan Vegan’ operating it out of his home.

Now, get ready for a little burst of nostalgia as Straits Records comes to The Substation this August, where it will kick start their new Front of House initiative, where various local independent retail initiatives will operate a bi-monthly pop-up store out of the box office.

Beyond being a distributor, Straits Records has been a champion for regional and local music for two and a half decades, having organised and co-organised numerous concerts as well as music-related events, including music-meets-art exhibitions. This is of course, all thanks to Wan, who is known by many in the scene as a stalwart of local music and friends with creators of the music he distributes, many of whom they played gigs held regularly at his Haji Lane headquarters to launch and promote fresh releases, and still organises live, interactive Straits Records Chill Sessions that are broadcast from The Substation’s basement to cyberspace to showcase some of these musicians and bands. Straits Records as a record label has also been actively involved in releasing albums by rock n’ rollers The Pinholes, ska heroes Cesspit, humour-rock band The Zozi and many others.

Speaking of Wan, late multi-disciplinary artist Lee Wen once nursed the idea of handing out an annual ‘Independent Artist’ award; the Cultural Medallion awardee had Wan at the top of his list because he deeply respected how long and how much the latter has been promoting music independently. And is is for these reasons that The Substation has invited Wan and Straits Records to return home, as part of we are not going back, we are coming around, The Substation’s contribution to the Proposals for Novel Way of Being initiative launched by National Gallery Singapore and Singapore Art Museum.

With the Straits Records Pop-up Store, look out for the releases it has produced, with the majority of items on sale being compact discs, complemented by a fine selection of vinyl records from Singapore and the rest of the world. The store will also double up as a community space, hosting local artists conducting workshops such as Live Screen Printing, Zine Making and Beading, along with listening parties where Ridhwan will feature music from his collection.

Each day, Wan is reminded of how the struggle to sustain an alternative communal space, particularly one that has carved out a niche at the heart of the city, is painfully real. With The Substation’s we are not going back, we are coming around programme, the centre hopes to rethink the role of arts and culture in our pandemic-stricken world, one that is broken and in need of repair. With this project, they hope to honour Wan’s indefatigable independent spirit and 25 years of behind-the-scenes dedication to Singapore music and culture, confronting displacement as The Substation too readies itself for the process of vacating their Armenian Street home ahead of the renovation of the pre-war building.

The Straits Records Pop-Up Store runs from 12th  August to 11th October 2020 at the Substation. For more information about the Substation’s Front of House initiative, visit their website here

0 comments on “we are not going back, we are coming around: Straits Records sets up pop-up store at The Substation”