Considering it’s the year the world is going through a global pandemic, it feels strangely appropriate that the final year of the M1 Peer Pleasure Festival is themed around Disability. Not only did the team involve disabled creatives and performers in the works this year, but also, considered the idea behind how disability is simply a different way of perceiving the world, something that COVID-19 has forced us all into doing just that in the ‘new normal’.

Directed by Okorn-Kuo Jing Hong, this year’s commissioned work What If was taken completely online owing to the new restrictions on live performance, comprising a total of four ‘episodes’ on Zoom as a new media experience. At its core, What If is the festival’s way of rethinking and reframing how we approach challenges in life. But instead of being overwhelmed by a sense of defeat, What If instead encourages us to take a creative approach, and see these as opportunities rather than ‘setbacks’, as shown in each of the four ‘episodes’ of What If. 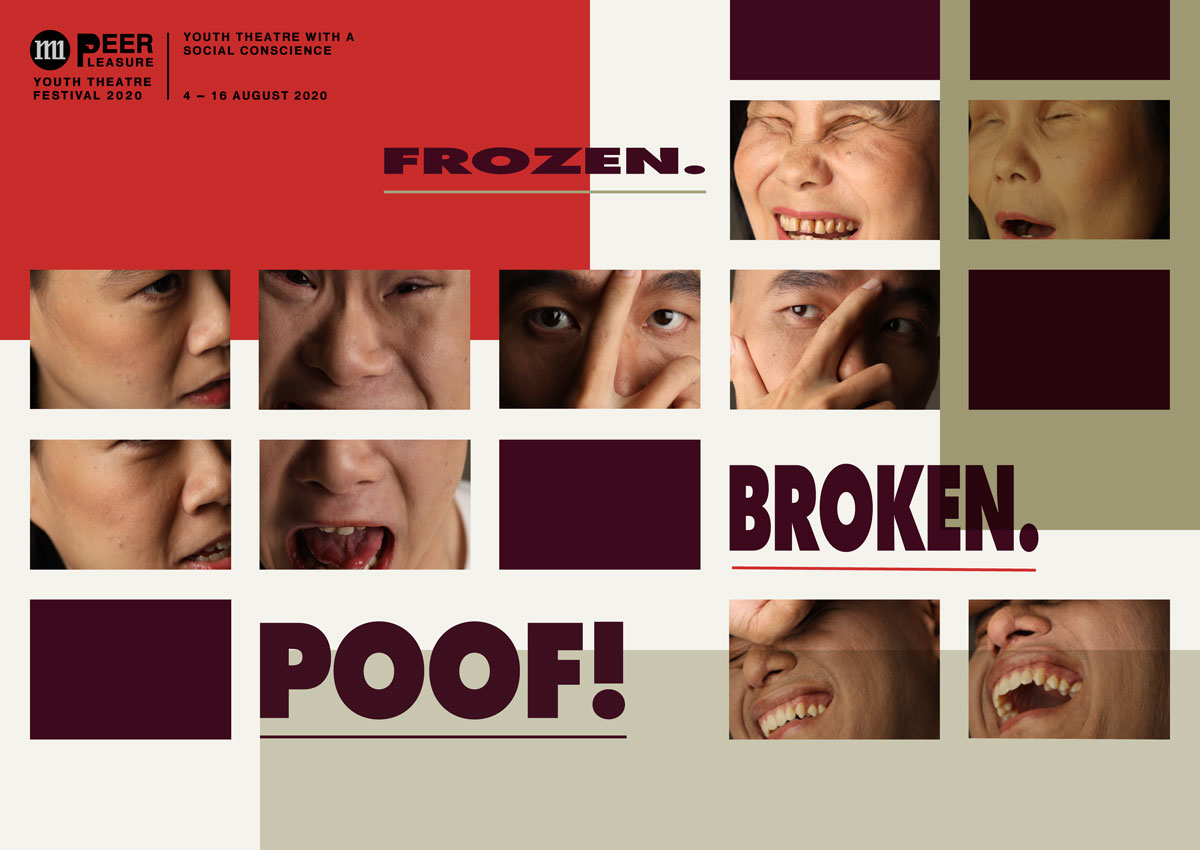 In the first episode, Frozen. Broken. Poof!, performers Stephanie Esther Fam, Muhammad Hidayat Rahmatullah Mohamad Yaakob, Tung Ka Wai and Wan Wai Yee play fictionalised versions of themselves, each one in their respective homes preparing for a birthday surprise for Shawn Tan. Exploring how we can stay connected in spite of our physical distance, each of these performers experiment and find ways to use technology and rely on each other to make up for their disabilities.

Wai Yee, for example, is visually-impaired, but manages to get Ka Wai to help check her temperature by showing him the thermometer on Zoom. Later on, she also takes a polaroid photo, mentioning that she recently took a photography class. The irony and absurdity of the situation is not lost on us, yet, rather than asking her ‘why’, Frozen. Broken. Poof! instead encourages us to ask ‘why not’, and attempt to see the world through brand new eyes.

In its title alone, Frozen. Broken. Poof! brings to mind how fragile our connectivity is in the online sphere, where a network disruption could literally cause us to disappear from the screen and break contact. But by the end of the performance, with a successful party in spite of the difficulties (complete with a healthy dose of K-pop), it seems that the only way to move forward is to incorporate our daily routines and embrace the strangeness of this new way of life. What If‘s second episode, 0dB, acts as a visual experience devoid of sound, replicating the daily experience of a hearing-impaired person. Written and hosted by Timothy Hua (from Nanyang Polytechnic) and Tung Ka Wai, only flash cards are used throughout the show, and audiences have to rely on their use of sight to experience the show.

The show opens with both performers conducting a workshop with the viewers on how to process sound without being able to hear. With the help of some volunteers and everyday household items, it’s not long before we learn how to visualise our impressions of sounds, with Tim and Ka Wai ‘drawing the sound’. With the interactive segment over, we then watch an animated short film by Ong Guat Teng, inspired by Tim’s life and how he gets used to hearing and appreciating sound once more. With the simple yet vibrant art style, it’s easy as a hearing person to fill in the gaps yourself and imagine the sounds that would play during the show. In the third episode, sound artist Ng Sze Min creates a fully audio experience for audience members, in collaboration with sight-impaired performer Muhammad Hidayat Rahmatullah Mohamad Yaakob. Having both read an account by a nurse in New York and her struggle with COVID-19, both Sze Min and Hidayat find a connection with each other as they speak.

Being a non-visual performance, all our attention focuses completely on the conversation between the two performers, and the result is fascinating, as the combination of sound, description and voice helps us form a mental image in our head. As Sze Min puts it, ‘he doesn’t see me, I don’t exist yet’, making us realise how differently a seeing-impaired person processes his surroundings. Coupled with how Hidayat has to use an automatic reader for ‘hearing’ written text, and his descriptions of how he uses echolocation and touch to ‘see’ an object, and we gain a temporary but more thorough idea of what it’s like to live life blind. In the final episode, Stained, audience members were given a choice whether to go down a visual route, or an audio route. With the audio experience (featuring sound designed by Ng Sze Min), this was an even more abstract work than Fetching Sanctuary.

Rather than following a clear narrative, we listen as Stephanie Esther Fam speak while a rather jaunty tune plays in the background. But that tune quickly becomes corrupt when Stephanie segues into a speech about the pressure of perfection and having had that drummed into her since young, with imagery such as  ‘shards of glass’ and ‘fragmented bloodlines’ bringing to mind the pain she goes through in the complex relationship struggles between herself and her parent. It is in the purely audio that the inherent poetry in the language and sound is better formed, as we allow our minds to imagine the shapes and colours that form this chain of thoughts. Each of the four episodes was also accompanied by an animated short, under the umbrella title What If – Aliens. Directed and animated by Faith Liu Yong Huay, these shorts feature the crudely artistic illustrations of Shawn Tan, and the voices of the performers. Watching a bunch of aliens go on whimsical adventures through outer space to maintain the balance of the universe, each short acts as a light-hearted end to every episode, ensuring we leave the Zoom meeting with a smile on our face.

As a whole, What If’s experimental form, while still in its infancy, acts as a good exploration of what the virtual realm provides and limits within the medium, and how best to adapt online work for those who experience the world in a different way. For the non-disabled audience members, What If allows them a rare opportunity to really see things from a new perspective, feeling like an alien making contact with Earth in brand new ways, and at its heart, what allows us to relate to each other in spite of our differences.