With the restrictive circuit breaker measures, it’s been far too long since members of the public have been allowed to step into a theatre. But this November, Singapore Repertory Theatre is set to be among the first to begin public performances once again, with their production of Tuesdays with Morrie, their first performance in the KC Arts Centre in seven months.

Based off Mitch Albom’s bestselling memoir of the same name, the show is led by director Samantha Scott-Blackhall, and follows Mitch (Benjamin Chow) as he meets up with former college professor Morrie (Remesh Panicker), who is battling Lou Gehrig’s Disease (ALS). What initially begins as a one-off visit turns into a weekly pilgrimage, as Morrie educates  him once again, only this time, it’s with the all-important lesson he never got to teach in school – how to live life.

In many ways, Tuesdays with Morrie feels like the perfect show to ease audiences back into the theatre. Throughout the show, the shadow of death never looms too far away, with Morrie in his final years. Yet, Morrie remains strangely upbeat, optimistic and raring to make the most of the little time he has left. Paralleling the uncertainty plaguing the world thanks to the pandemic, Tuesdays with Morrie then leaves us with a reminder that life, COVID-19 or not, is unpredictable, and certainly far too short to put on the blinkers and maintain a narrow-minded view of success and happiness.

In speaking to stars Benjamin Chow and Remesh Panicker, we discuss the implications and impact of being one of the first live shows to open since theatres closed, perhaps heralding the start of something next to normal, and paving the way for more shows to open. “It’s been a long year for everyone, and it feels like we’ve lost a year. I’ve lost about 3 shows, and I ended up having to work alternative jobs beyond acting and video work,” says Benjamin. “I’m so grateful to have the chance to finally come back to the rehearsal space, and feel that it’s a real privilege to be one of the first few people performing onstage again, not just as an actor, but for this opportunity to finally welcome audiences back again.”

“I’m really excited about doing this show actually, as the last thing I performed in was actually 4 years ago,” says Remesh, who we last saw in SRT’s production of Yasmina Reza’s Art at National Gallery Singapore. “It’s very nice to get things going again, and there’s plenty of excitement and a little anxiety because we’re still in the midst of this pandemic. But how long can we carry on being afraid for? I’m very grateful that people are coming, even if it’s just 50 people per show. Best of all, we’re rehearsing in real life, and I can feel the presence of Ben next to me, and the rest of the crew.” 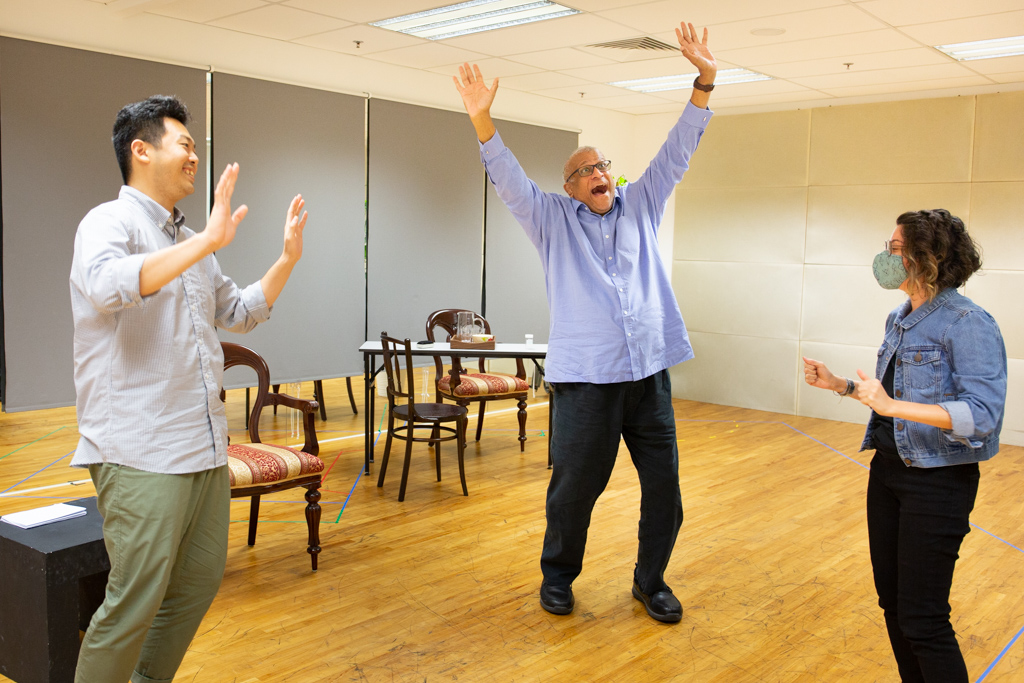 Considering how well-known the book is, neither Remesh nor Ben feel the pressure to cater to audiences, only that they tell the story as sincerely as possible in their performance. “I first read Tuesdays with Morrie maybe 20 years ago, and I was moved by how Morrie was able to find the joy of life and the ‘right’ way to live, to appreciate things and be so forgiving,” says Remesh. “As a play, it’s very text-heavy, and the actors need to be able to handle both the accent and the language well. Our main concern is really to perform as truthfully as possible, and bring across the play’s important message about taking the right attitude towards life.”

Both actors also commend Samantha Scott-Blackhall’s directorial style, with how cooperative she is and how much space there is to explore and play, before she sharpens and tweaks it to its final staging. “Samantha is a fab director, and always gives us intelligent options to play with,” says Remesh. “If you suggest something, and she likes it, she’ll suggest using it, and it’s a very collaborative process. She’s always very open to trying things, before editing it to make sense.”

“To Sam’s credit, we noticed how there were so many theatrical devices in the script you could describe as dated or gimmicky, but Sam knew exactly which ones to keep and which ones were still relevant for our time, to make sure it didn’t distract from the core of the play,” adds Ben.

Most important of all to a two-hander like Tuesdays with Morrie however, is the actors’ chemistry, and how well they bring it to the stage. “Sam managed to put this nice frame on Mitch and Morrie’s relationship, and really knows how to lift it during the play,” says Ben. “I think the physicality of the characters is very important too, like how Morrie has to show how his ALS is increasingly affecting his body, while for myself, I’m very different from Mitch. He’s a very closed and tight person, and very Alpha, so the way I play him is all about breaking down these walls he’s created over the course of the play.”

“Ben and I get along well, and we actually know each other from a while back,” says Remesh. “I’m a friend of Ben’s dad, and he used to come into the studio carrying Ben as a baby! When we did Romeo and Juliet for SRT, I met Ben again, except now he was all grown up.” 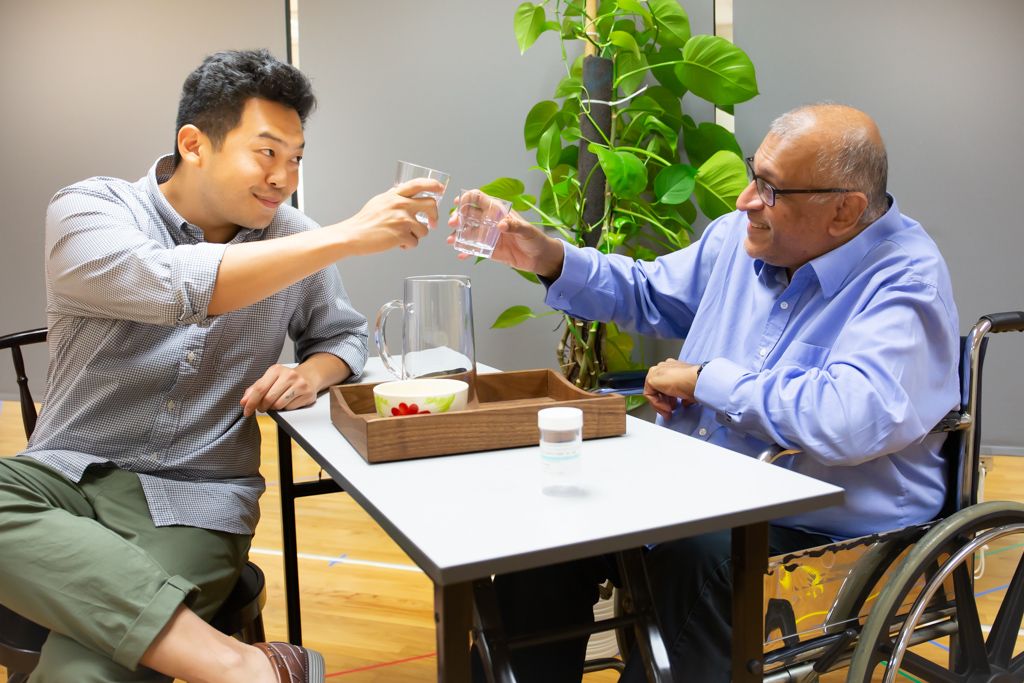 On the relevance of staging this play in a time of uncertainty, surrounded by panic and fear, Remesh stresses how this is not a play about impending death – but life. “One of my clients, the Lien Foundation, is very interested in philanthropy in palliative care, and they have this Life Before Death initiative which is all about how to approach your death and live your life as positively as possible,” says Remesh. “I was lucky enough to be involved in making a documentary about people who were terminal and how they chose to live their last days, and so much of it was about choosing not to be portrayed as sad and negative, but to make it upbeat and facing your time when it comes with positivity. In the same vein, this play is really about how to live life, and how to stay positive in the face of everything, even death.”

“I think Tuesdays with Morrie is particularly relevant for our Singaporean society, since it’s about someone who found success through material wealth gathered, and then realises it doesn’t matter as much as the relationships he makes,” says Ben. “It’s a nice reminder for a lot of people here to remember what really matters when mortality knocks at the door. There’s definitely people out there who will take something away from this, whether it’s about family and forgiveness, or about having the need to do something meaningful beyond work and earning money.”

“It really isn’t a heavy show – it’s more of a hopeful show with occasional heavy moments in it,” adds Remesh. “So much of it is about rediscovering the human connection, and re-learning that sometimes the simplest things in life can be the most important things. Morrie has a line that goes something like ‘the problem with our culture is that more thing is good, more money is good, more more is good’. It’s not that money and things are bad, but that beyond these things, you need to remember to stay connected and maintain your relationships too.”

At the end of the day though, what’s most important is that Tuesdays with Morrie marks the beginning of life again for live theatre in Singapore, small but steady, and hopefully, a starting point for the rest of the scene to follow suit. “Coming back to a cinema for the first time when they opened felt so amazing, and I think it’ll be the same for audiences in the theatre,” says Ben. “It’s a healing process, and that’s the gift we’ve been given as actors and artists, to give back to the community and help them heal from this rough year. It’s the right show to get people to feel that we’re on the way back to normalcy, a quite but wholesome reminder that there is always light.”

“Despite all the challenges, despite the fact that the company is going to lose money on this, the fact that they’re putting up this show is for the sake of keeping something going, to push ourselves into taking the first steps to returning to some kind of normalcy,” adds Remesh. “And it’s the perfect way to get theatre started again with a show about life.”

“I’m looking back at my 30 years as a theatre professional, and I still recall one of my most enjoyable large cast experiences back in the late 80s, where Kuo Pao Kun brought in this German guy who did Caucasian Chalk Circle, and we had all these people from various companies coming together for the ensemble. That to me was a community,” Remesh continues. “Even with just two people in the cast, we’ve got the whole crew behind us working on Tuesdays with Morrie, and I’m so happy that we’re back to having this communal experience once again during rehearsals.”

Tuesdays with Morrie plays from 1st November to 6th December 2020 at the KC Arts Centre. Tickets and more information available from SRT

0 comments on “The Banter: An Interview with the cast of SRT’s Tuesdays with Morrie”