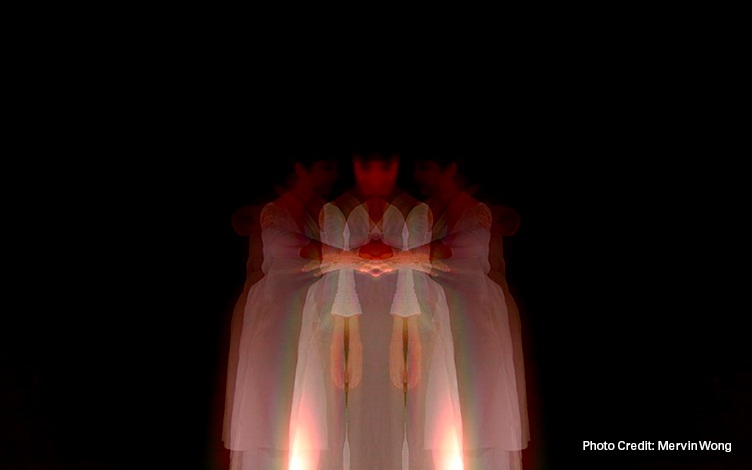 The lecture-performance form often feels loaded, if only because it sometimes seems like an excuse to showcase incomplete work that fills in the blanks with academic rhetoric. But in the case of the Esplanade’s Failing the Dance, the double-bill of lecture-performances makes a compelling case for the viability of the form, and its ability to raise awareness of issues and dialogue, and manifesting these arguments through the body.

Performed by Nirmala Seshadri and Soultari Amin Farid, in each work, the dancer-researchers examine their respective disciplines (bharatanatyam for Nirmala, and Malay dance for Amin), and how their position as classical forms has entrenched gender roles and how they have deviated from the form. But is it they who have failed, or the form that has failed them with its inflexibility? 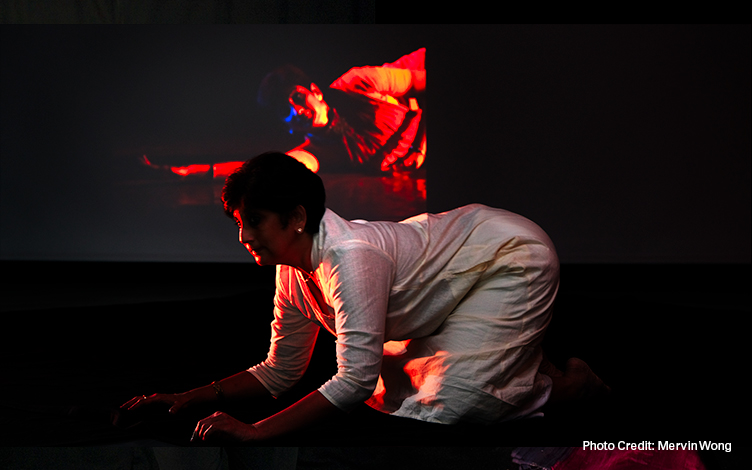 In Nirmala Seshadri’s The Problematic Danseuse, she considers the ideal form of the danseuse coined by 13th century theatrologist Nandikeshwara, imagining her as “lovely, young, with full round breasts, self-confident, charming, agreeable, dexterous in handling the critical passages, with wide-open eyes, adorned with costly jewels, with a charming lotus-face, neither very stout nor very thin, nor very tall nor very short.” This stands in stark contrast to her own body, and as she repeats these words over and over again, she draws attention to their inherent sexism and almost absurdity that those who do not look a certain way cannot become the ideal danseuse.

Throughout the lecture-performance, Nirmala then embarks on a journey through her own performances in the past, and how despite being a classical bharatanatyam dancer, her art form has evolved from simply following tradition, to breaking it, and offering her own interpretations of the form and its application. These are often met with flak from the greater (often male) community out there, who are horrified at her seemingly outrageous subversions of the dance, often to do with her insistence on reclaiming her female agency, whether in the ways of eroticism, or even as a mother figure. 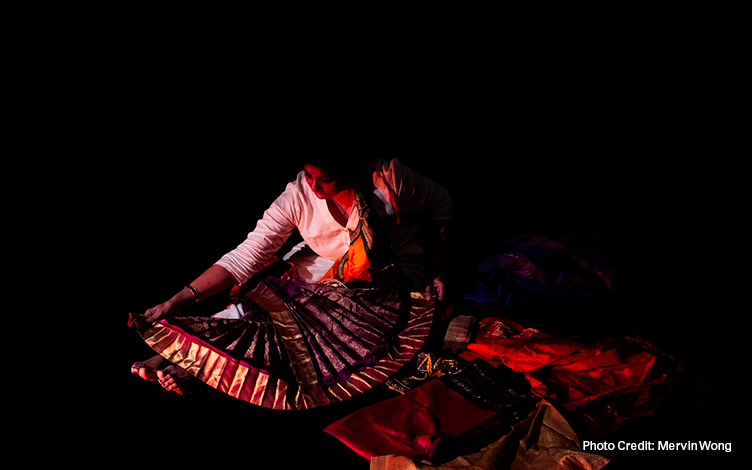 Interweaving these archives with her own personal feelings, we get a sense of disappointment each time she is rejected. At one point, she recalls how the organisers of a festival abruptly turn off the lights midway through her performance, perhaps one of the rudest forms of cutting a show short. More horrifying is how she was invited as a diasporic artist to share her views and interpretation of dance, only that this turns out to be lip service, serving as a false front to position the festival as progressive when it actually only seeks to maintain pre-existing forms and structures.

It’s no surprise that such insistence only contributes to issues of internalised guilt and frustration, both from being an outlier in a form she loves and the inability to progress it into the future. It seems almost ironic that for what is considered one of the most versatile and free art forms, dance may instead have turned out to be one of the most restrictive. Beneath her calm demeanour then lies a cry for change, that it is only when these structural pillars are torn down that she will no longer be bound, and free to express herself as a woman, and shed the categorisation as a ‘problematic danseuse’. 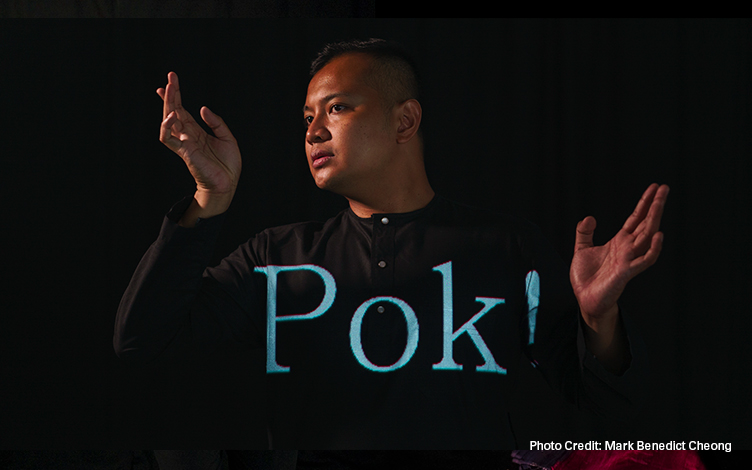 Meanwhile, in Soultari Amin Farid’s Pok!, the Bhumi Collective’s joint artistic director remembers a terrible performance of a lenggang years ago, a courtship dance in which he garnered the jeers and criticism of the audience for his inability to maintain the ‘masculinity’ of his character, swaying his hips and forgetting steps. In performing the lenggang alone, Pok! becomes a deeply introspective exercise, as Amin reflects on where exactly he went wrong, and the inherent prejudice and stoic gender norms the form insists on maintaining.

Certainly, much of the lecture-performance is about education, and Amin is a good teacher for those who are completely unfamiliar with Malay dance. Alongside introducing us to various Malay dance/music genres and a brief history of the form’s origins, Using archival footage of his performance, he points out precisely the mistakes he made in simple language, and makes us aware of how serious his dance faux pas are considered. 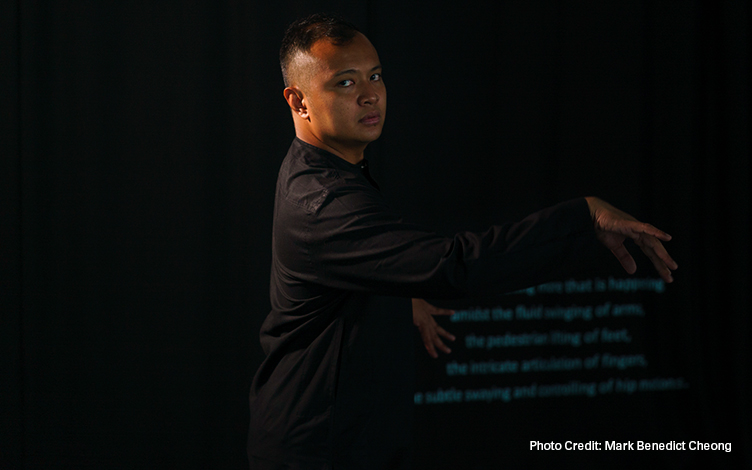 In re-attempting to perform the lenggang alone here, he erases the need for a female partner, and instead comes to fully embody the spirit of the dance as opposed to the suppression and strict conformity a more traditional presentation requires. As we watch him, the word ‘pok!’ is projected on the screen behind him each time we hear a beat, bringing to mind the derogatory term ‘bapok’, referring to an effeminate man in Malay, often appearing over his body, as if labelling him.

Over the course of the lecture, Amin questions his own culture’s inherent homophobia, and how it presents itself even in the arts. For anyone who’s ever felt like a reject of society, Amin’s story of how his own father would slap his wrist as a child when he appeared effeminate will be a resonant one, and acts as a painful reminder of how society still has a long way to go before acceptance becomes commonplace. Amin ends on a note of quiet resistance, choosing to embrace his position as a man who is unable to naturally be ‘masculine’ in Malay dance terms, and leaves us to question the need to maintain such strict rules and interpretations of traditional dance forms, now and in the future.

Failing the Dance – A Double Bill of Lecture-Performances streams on SISTIC Live till 31st October 2020 (for free) as part of da:ns Festival 2020. For more information and tickets, visit the Esplanade’s website here

0 comments on “Review: Failing the Dance – A Double Bill of Lecture-Performances (da:ns Festival 2020)”