HONG KONG – Whether you’ve been literally confined to your home for work, or simply feel the strain of being unable to travel, there’s a definite sense of claustrophobia that’s descended upon the world thanks to the coronavirus situation. For Hong Kong, that’s a feeling that’s been further aggravated by the political situation, and has only led to further doom and gloom. 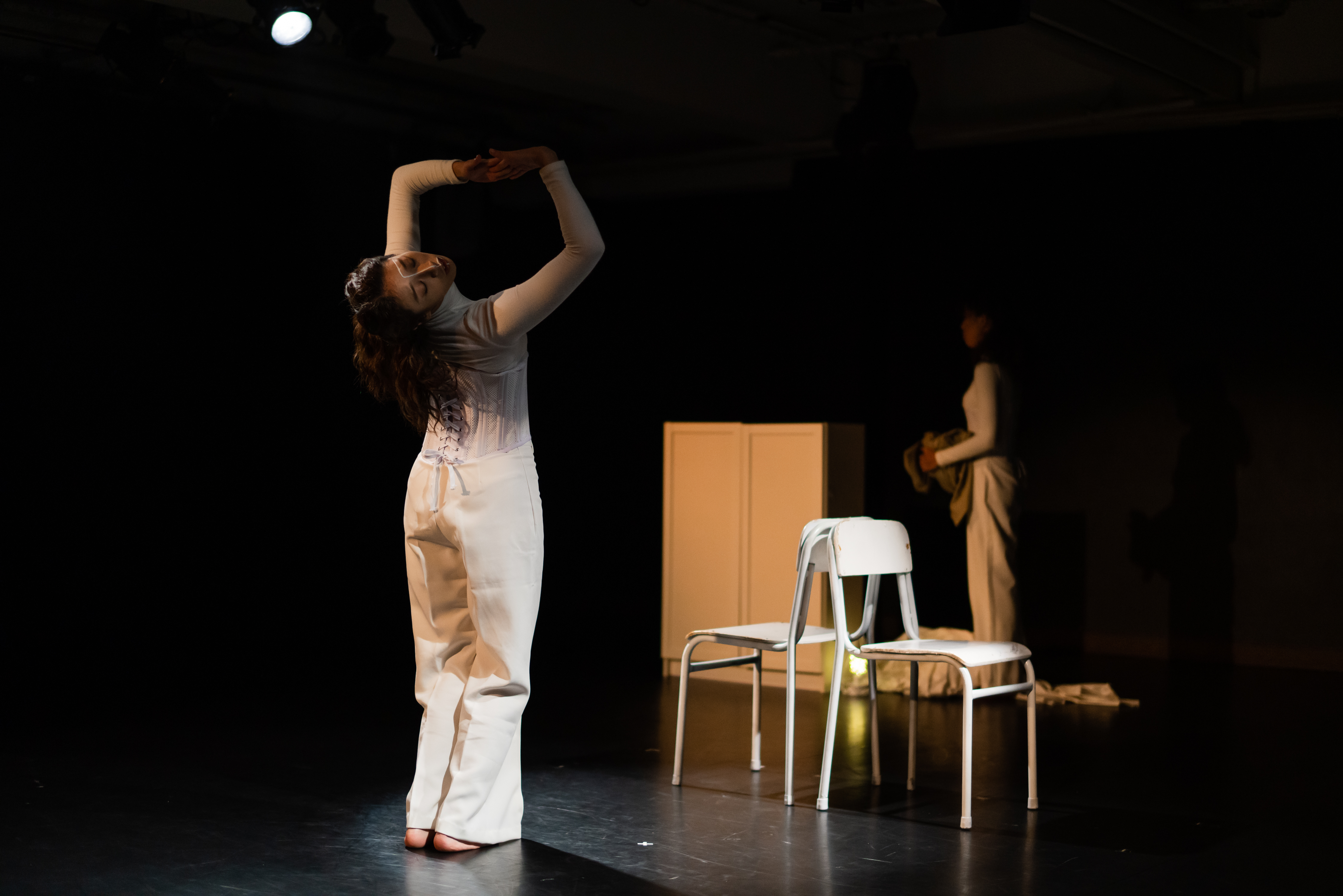 Perhaps the one solution to it all is to look inward and back, taking this time not as imprisonment, but as a space for solace, an idea that dancer-choreographers Kong Wing Yee and Kwok Tsz Ying explore in Solara & Luna, as part of City Contemporary Dance Company’s (CCDC) REAL Showcase Series. Originally intended as a live performance, due to restrictions, CCDC has instead decided to stream the last recorded rehearsal of the performance during their Digital Dance Season, with the work highlighting the need to break free of vicious cycles and learning to make peace with their internal struggles. 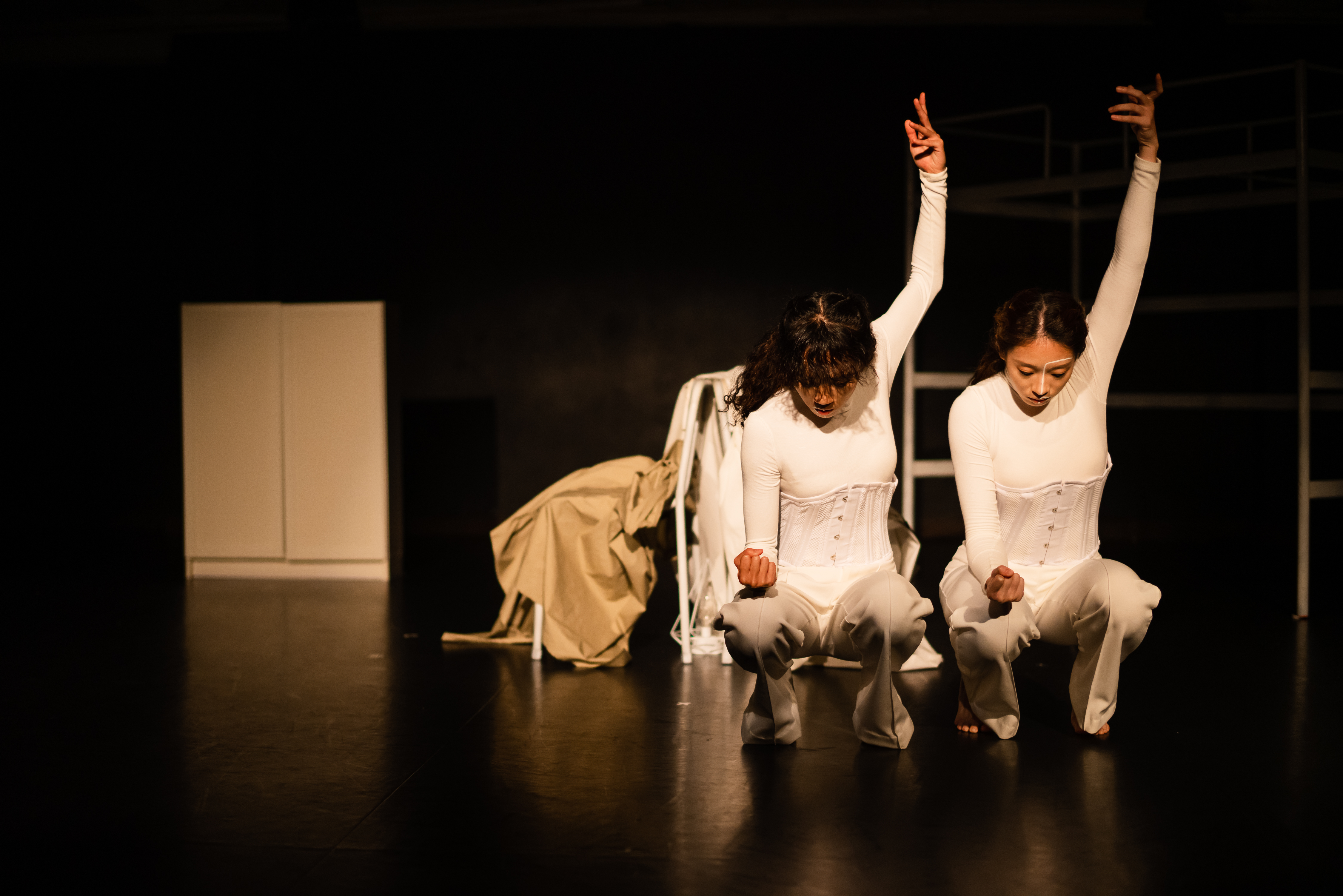 Inspired in part by the concept of chakras and ideas of energy flow, Solara & Luna opens with black and white, CCTV-like footage of the two dancers, as they appear trapped and confined in a ‘room’. The stage is mostly bare save for a few pieces of furniture – a bunk bed without a mattress, two chairs, and a small cupboard. Both Wing Yee and Tsz Ying are draped in loose white cloth, ghost-like, and we feel almost like voyeurs looking in at them. 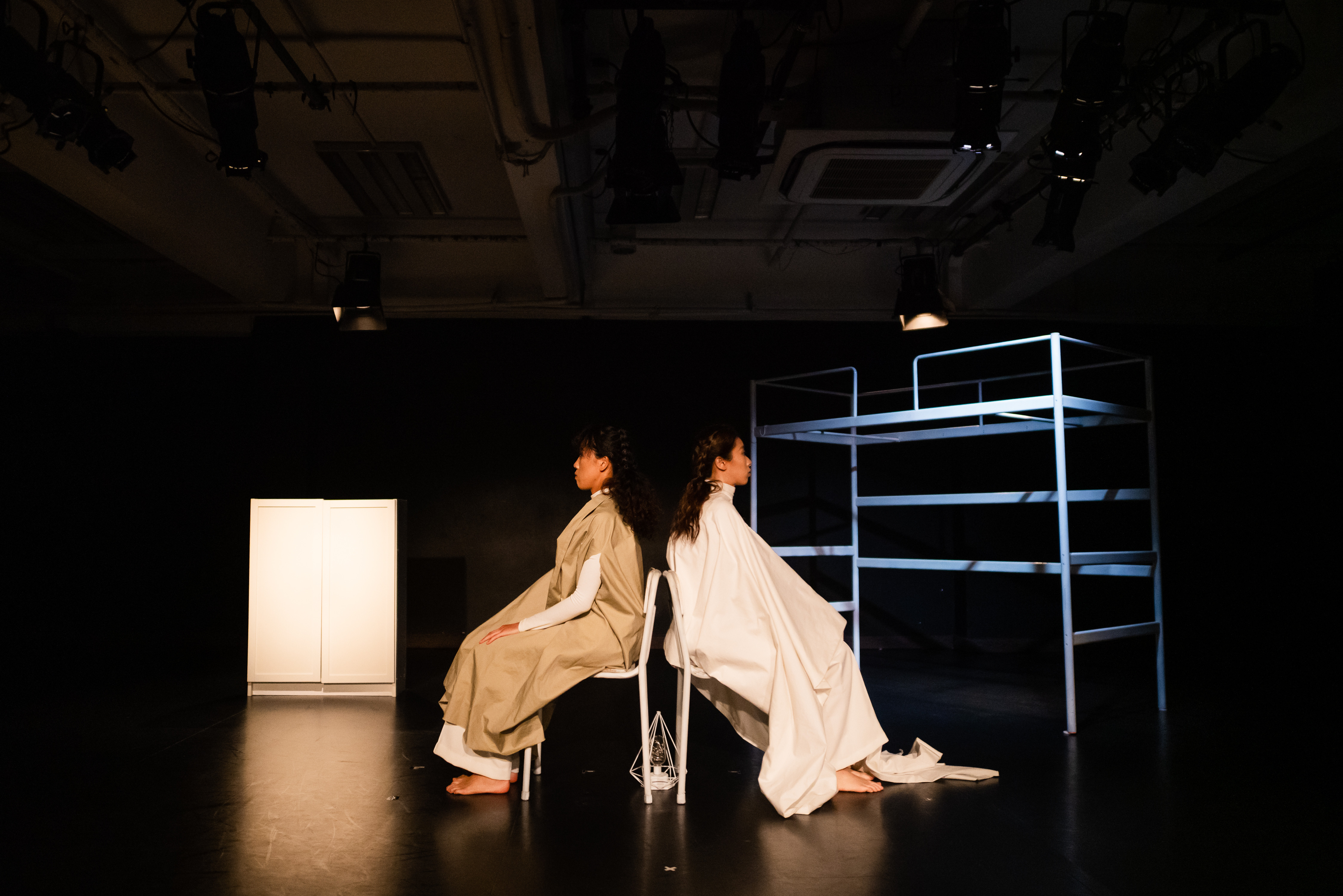 Switching to a more direct camera angle, colour returns to the scene, as they remove the loose cloth to reveal identical white turtlenecks and corsets, further emphasising the idea that they are being restricted and held back. Moving slowly and deliberately, illuminated only by a spotlight, they inch across the stage while slow ominous music (by Ng Chik Wai) filled with the recurring sound of bells plays in the background, almost like they are beginning to perform a ritual. 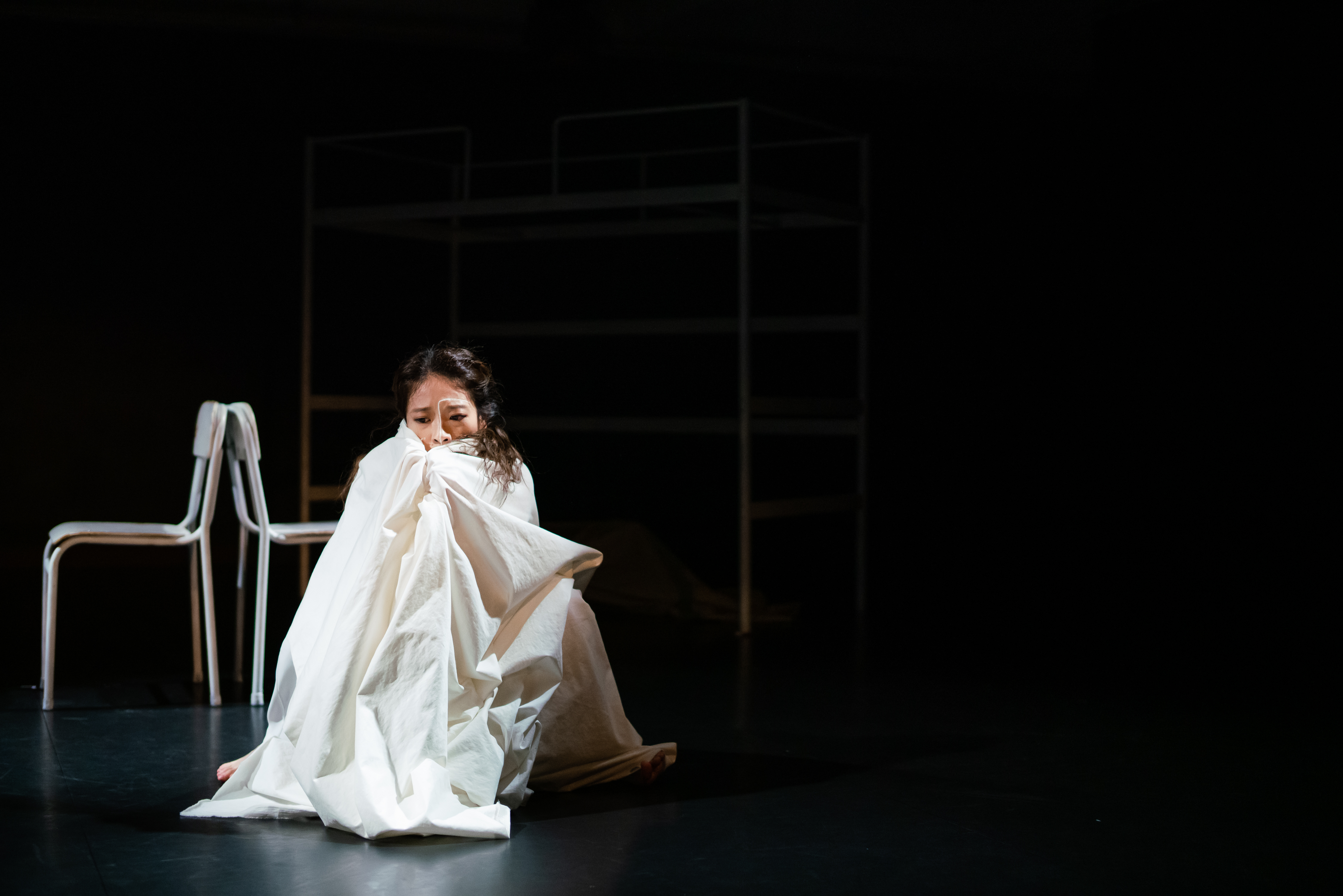 There is a sureness in their steps as they explore and stretch their bodies in precise ways, hyperaware of the way their joints are highlighted in their movements and firm in their intent, even while remaining wraith-like as their arms ease their way through new poses. We hear android-like whispers in the background, clearly not human, and we feel a sense of unease, a clear degree of hostility in the air. We wonder if both of them are possessed, not by spirits, but by trauma they replay over and over again, as if this ‘ritual’ acts as a coping mechanism to ward these dark thoughts away. 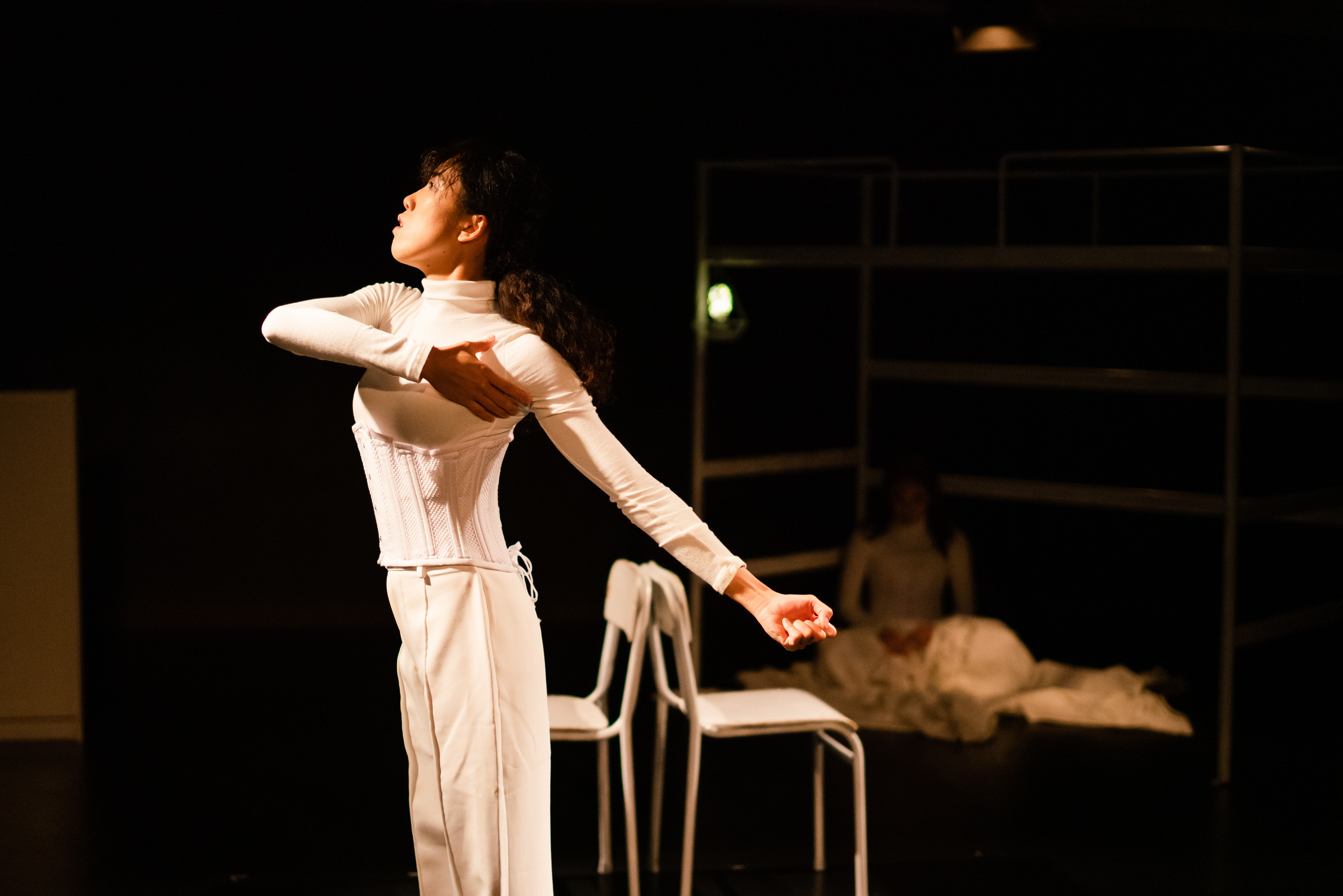 Each of them takes turns to perform solos, while the other hides away onstage, almost as if suppressing these dark memories with the more energetic performance. Each of them showcases their specialties – Tsz Ying with her more contemporary approach to her dance, while Wing Yee seems to draw from her Chinese dance background, utilising the white cloth like water sleeves as she whips them about. As Wing Yee dances, we faintly see Tsz Ying in the background, furiously hitting the bedframe with the cloth over and over again. The dim lighting continues to create mystery and tension in the piece, and highlights the fear, frustration and descent of their mental health within this confined space. 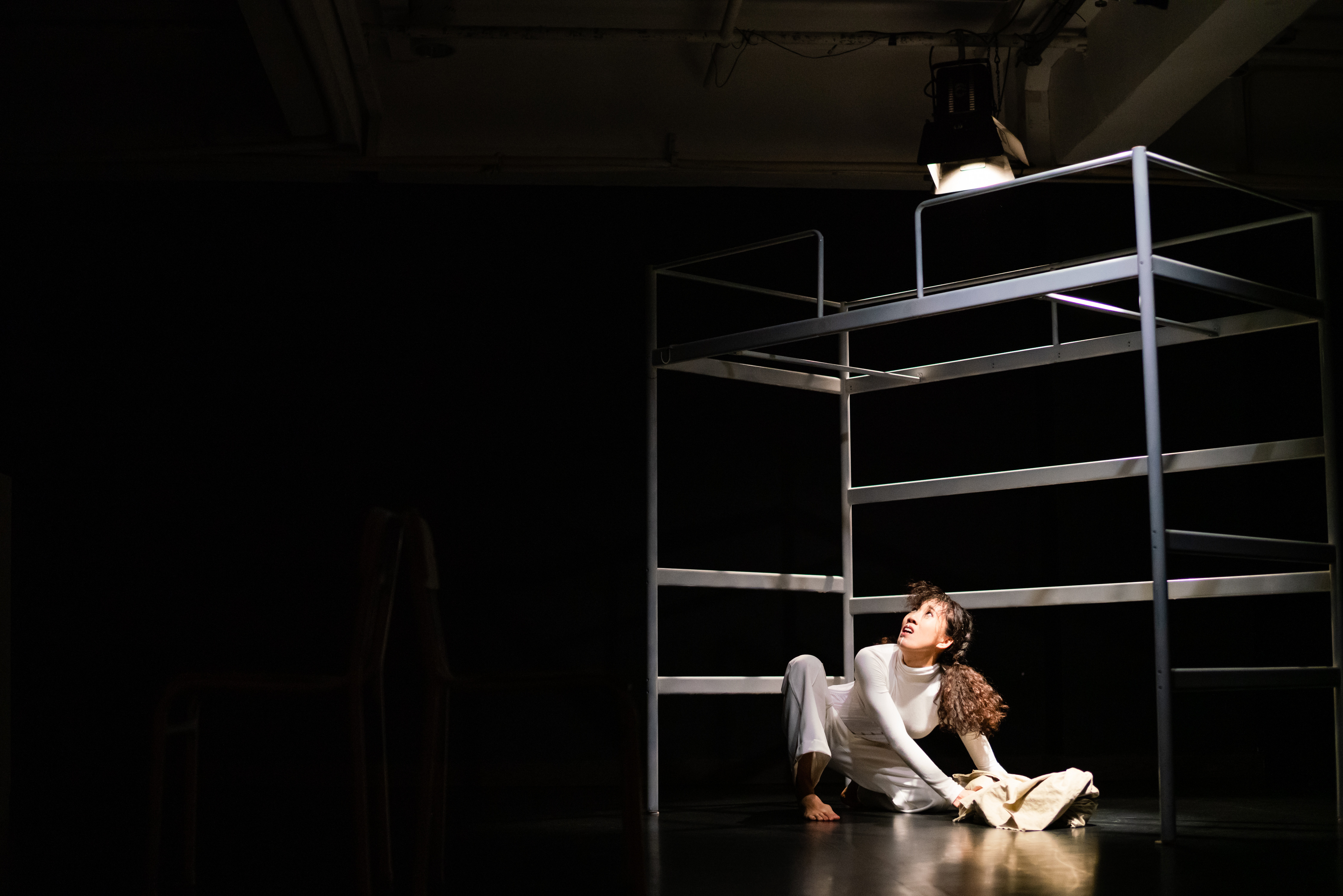 But suddenly, there is a complete tonal shift as they sit and face each other from across a small table, the music segueing into much more romantic, lounge-y tune. Even so, there is a continued tension between the two, a refusal to cooperate or follow the other’s movements. It’s hypnotic to watch them purposely, constantly change up their positions and gestures to ensure they are never performing the same thing. Yet, it also seems that they are trying to learn and understand from each other, with this sequence ending with them covering their faces with their sheets, and simultaneously pulling them off each other, an almost conscious decision to see each other as they are, and accept them.

Solara & Luna marks a strong public debut from both Wing Yee and Tsz Ying, an introspective work prime for the pandemic as we explore the inner turmoil and struggles one goes through when facing a crisis, a problem that takes some serious reflection and mindfulness for us to resolve within, before we project that same energy outwards. Confident in their execution and provocative in their concept, it would be ideal to follow Wing Yee and Tsz Ying, as they continue to explore their artistry and craft in future works.