Students consider the impact and relevance of god and religion in the face of unimaginable crises.

When playwright Haresh Sharma wrote godeatgod, it was written in response to the 9/11 attack in the USA, capturing the spirit of the fear and uncertainty felt in the wake of the incident, with even faith and religion itself becoming difficult to seek comfort in. It is through the lens of faith that Haresh then dismantles and deconstructs how one can go on living in a post traumatic world, taking apart faith at its darkest to find the light within.

In Lasalle’s new version, director Alvin Tan once again helms the project after having first directed godeatgod back in 2002 with The Necessary Stage. However, in this version, it is young students performing the piece, many too young to even remember 9/11 when it happened. As such, godeatgod has been updated for 2020, tussling with more recent events and tragedies befalling the world. 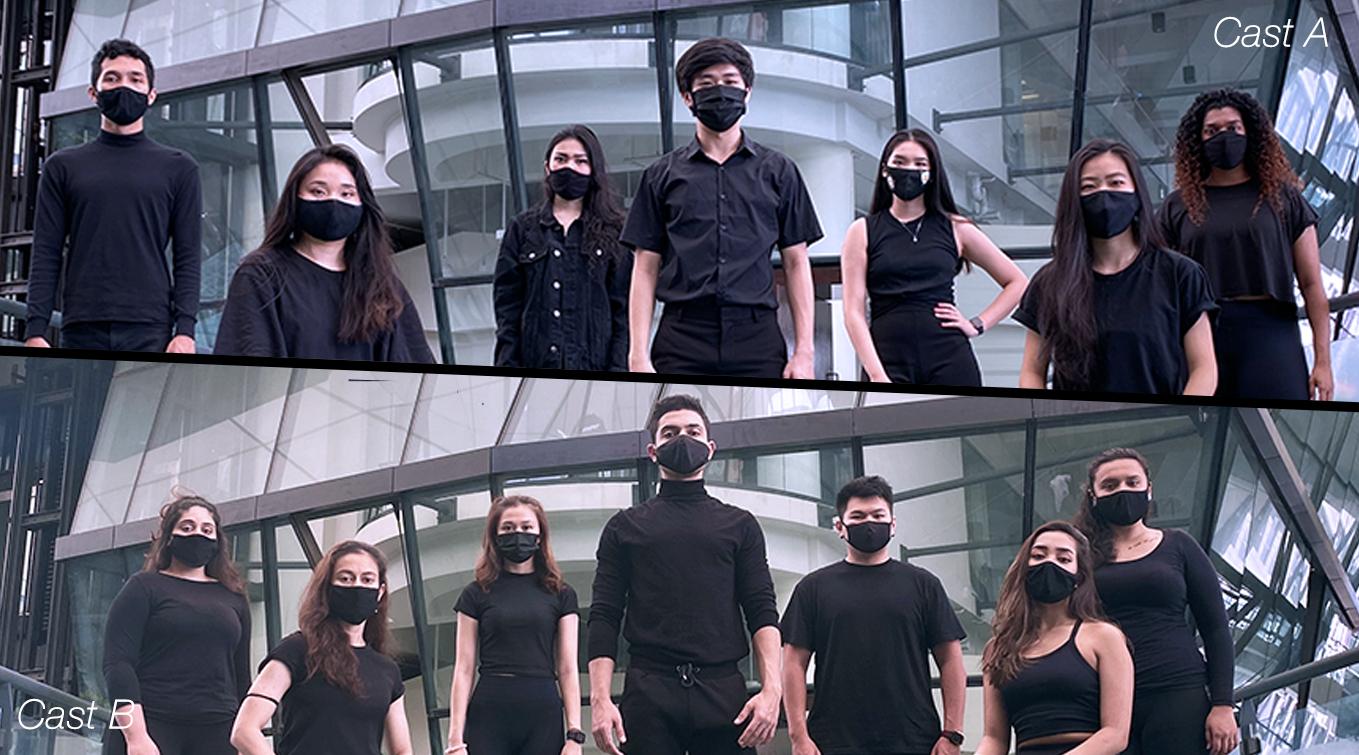 Performed by two sets of third year BA (Hons) Acting students, this updated version of godeatgod is more self-reflexive than ever, going beyond just the original script to include devised scenes where the actors share their own stories and experiences of religion. From the beginning, godeatgod already establishes itself as a whimsical piece, opening with a colourful musical number to introduce the play’s themes.

godeatgod does not possess a clear linear narrative, rather, it presents itself as a series of scenes reflecting on the state of religion and the world today. The scenes are varied, and mostly give the impression that things are hopeless, reflecting on everything from the Catholic Church to the Rohingya crisis. While mention of older events such as the 1995 Sarin gas attacks in Tokyo, or the 2004 Boxing Day tsunami in Indonesia, the characters recounting these seem distanced, as we have long moved past such tragedies. They instead turn to more recent events such as the sinking of the Korean ferry in 2014 and the ongoing COVID-19 pandemic, and wonder about how the religious maintain their faith in the face of such massive loss.

It is a nice touch to see that across both casts, the plays differentiate themselves by giving the students a chance to show off their culture and strengths, such as how Cast A perform a song in Korean, as opposed to Cast B using an English song in the same scene. Later on, in a devised scene, each cast engages in their own extended discussion on their experiences with religion, from where a mixed Hindu-Catholic girl goes if she eats the forbidden beef, to personal accounts of abuse of power from members of the church (City Revival Church’s infamous video by Joanna Theng and Jamie Wong is not spared from ridicule). It is these personal touches that lend the play its strength, as the cast are most sincere and emotional when engaged in debate, bringing out varied perspectives and even occasional argument over the place of religion in our modern lives.

For the most part, the mood is bleak, and organised religion getting the short end of the stick, with plenty of doubt cast upon it, thanks to the traumatic experiences of the cast and their faith shattered when they can no longer trust not just people, but even in the failure of systems to protect them when they need it most. Emotive video footage and atmospheric montages are projected on a screen behind the cast, while a news ticker constantly streams ominous, disastrous sounding headlines, helping add to the dour mood. The set is otherwise sparse, drawing focus to the performance rather than the design elements. With how empty the space feels, the cast at times seems abandoned by their respective gods, alone in their suffering on this mortal realm.

Often, one does feel that there are far too many ideas involved in this new version of godeatgod, jostling for attention and resulting in a less than cohesive piece, more exploratory than explanatory, as audiences are left to wander these same branching thought pathways from questions raised by the actors. Still, there is enough information provided that one can feasibly do some self-reflection over the course of the performance, and our own relationships with faith.

Ultimately, what godeatgod 2020 seems to be pushing is to ask for some form of accountability, not just from religions, but from those in power. As both plays end on the same ritual, with a character introduced reflecting on the passing of a loved one, she seems left at a loss, both from grief and confusion at how she is meant to carry on. In much the same way, we wonder how we continue to emotionally survive and keep hope alive in spite of all the terrible things happening in the world. Thankfully, godeatgod’s answer isn’t simply thoughts and prayers, but a genuine desire to find meaning in an otherwise absurd life, as it dishes the hard truths of the broken world around us.

0 comments on “Review: godeatgod by Lasalle College of the Arts”