The Young Company explore promenade theatre and uncover ghosts of the pasts, while revealing a talented cast.

In a year where the theatre scene has been forced to change, it makes sense that new productions would attempt to take on new forms and experimentations to adapt to the restricted performance landscape. And so it is for the Singapore Repertory Theatre’s latest batch of The Young Company graduates, as they deviate from their usual large ensemble piece to explore a unique theatrical ‘tour’ taking audiences to the very depths of the KC Arts Centre.

Ghost Light was conceptualised during Singapore’s lockdown period, leading director Daniel Jenkins to pivot the direction this year’s The Young Company would take. Written by Rob Johnston, the performance takes inspiration from the many beliefs and rituals that exist within the theatre world, with the central image being the ghost light – a single light left burning when the theatre goes dark, and a sign of emptiness. 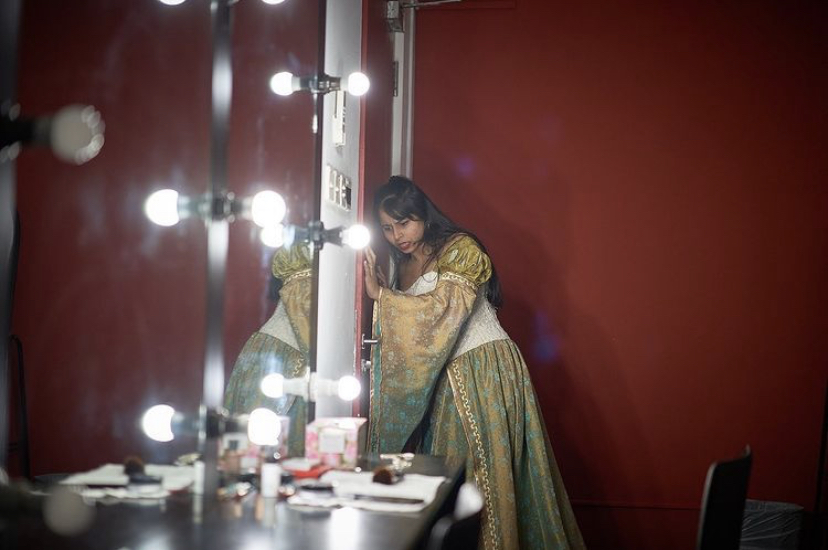 We began our ‘tour’ gathered outside the KC Arts Centre foyer. Lit by candlelight, it feels almost romantic, as we consider our love for the theatre having brought us here today. We were then introduced to our three tour guides – Megan Ann Pang, Rohan Patil and Misha Paule Tan, each full of energy and ready to bring us on this journey. The audience itself comprised only 10 people, split across two groups of 5, so our guides could provide a more intimate experience, and pay closer attention to each individual audience member, alongside following the requisite safe distancing and safety protocols. After a quick safety briefing, we were ready to proceed to the next location.

Entering the theatre, we took our seats and gazed upon the stage, with props and a set covered with drapes. Evoking thoughts of phantoms and mysteries, our guide then began talking about theatre superstitions and beliefs, ranging from superstitions such as saying ‘break a leg’ instead of ‘good luck’, to why one does not whistle in the theatre, to even actors’ tendency to break the line of the curtains. It is here that we then encounter ‘stage manager’ Sal (played by Michelle S. Turberfield). 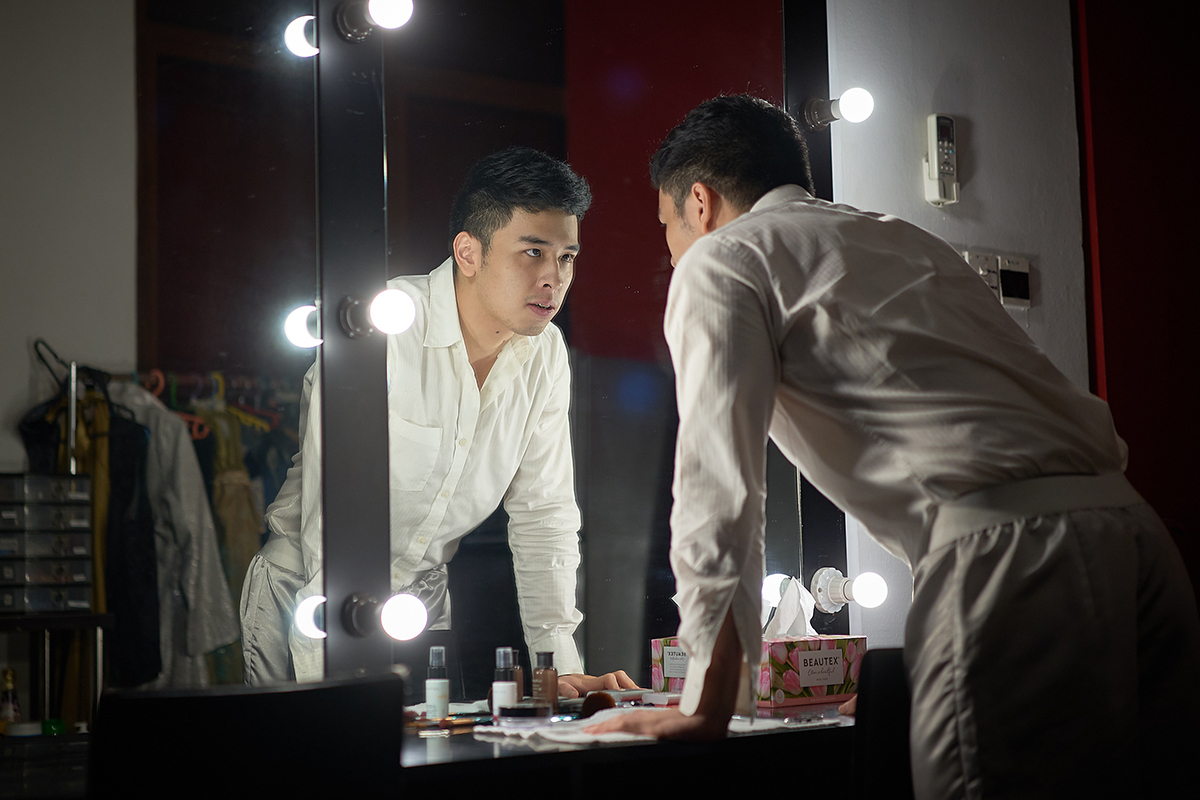 Led to the changing room, we meet actor Brock (Gay Han Joel), an understudy hoping to one day become the star. With confidently delivered lines, Joel showcases a keen ability to command attention and maintain a strong presence by himself in a room, and certainly one to look out for in future, doing a good job in his Dr Jekyll/Mr Hyde type role, effortlessly showcasing both his position as a star, while also revealing the sinister side leading him to his current success. Somehow, despite knowing that there were 4 others with me, Joel makes me feel alone in the room, as if I had to be ready to face this alone, particularly when the “haunting” began. 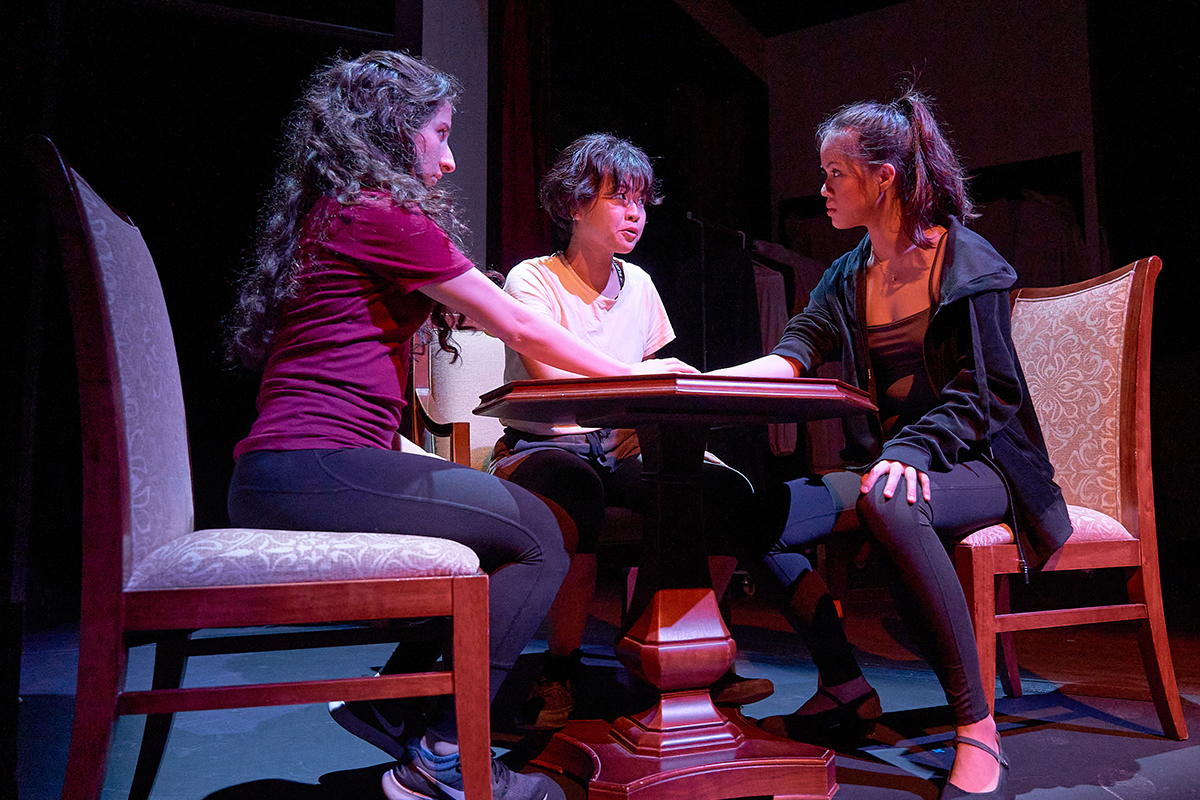 Now led to the circle by our guides, we took our seats, transitioning smoothly from walking tour to show, as we turned our attention to the stage, where Kaelen Ong, Beverly Joy Goh and Elizabeth Chernyak were ‘rehearsing’ for their upcoming show. This time, they discussed taboo words not to say on stage during rehearsals, as the lights dimmed and a spotlight was cast on them. What I really enjoyed about the performance was that they each played their respective characters well, and made them relatable. Seated around a table, it was clear what they were about to do. We think about the ghost light, and how it is intended to keep ghosts away from the theatre. But what if these ghosts are in fact home, and don’t need to be chased away? It is almost as if they are trapped in the past, and we are reminded of what is going on around us. 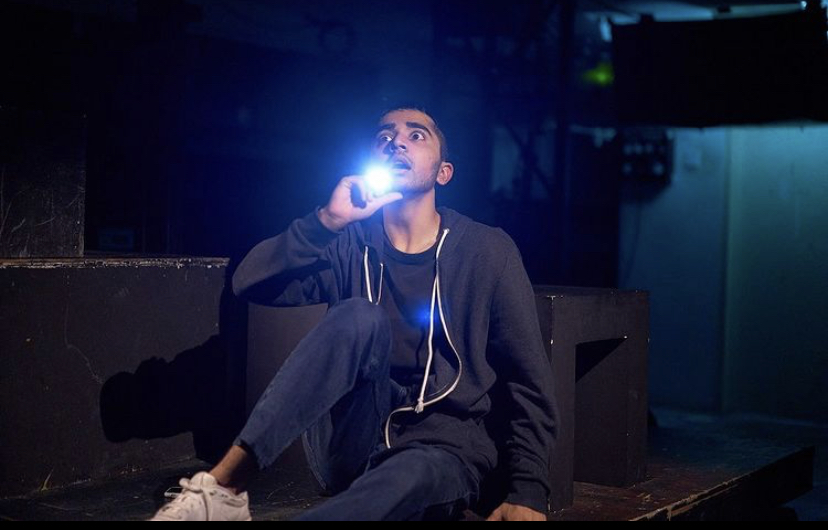 Heading down to the basement, we imagine it as a place that holds plenty of secrets, trap doors and whatever is hiding in the shadows. And there, down in the lair, we meet Niraj Nair, who has apparently broken his leg, telling us the daunting stories that have haunted him since he has been trapped down there. Niraj is another actor to look out for, speaking clearly and performing his role well. When a mysterious voice is heard in the darkness, our imagination runs wild, and made me hope there wasn’t anyone hiding behind the drapes where I was seated, making this another well-executed scene.

Now seated onstage, we had time for just one more story. While seemingly innocent at first, the story morphed along the way, and by the end, we see theatre in a new light, respecting it for what it is, what is around us and what is within the theatre. 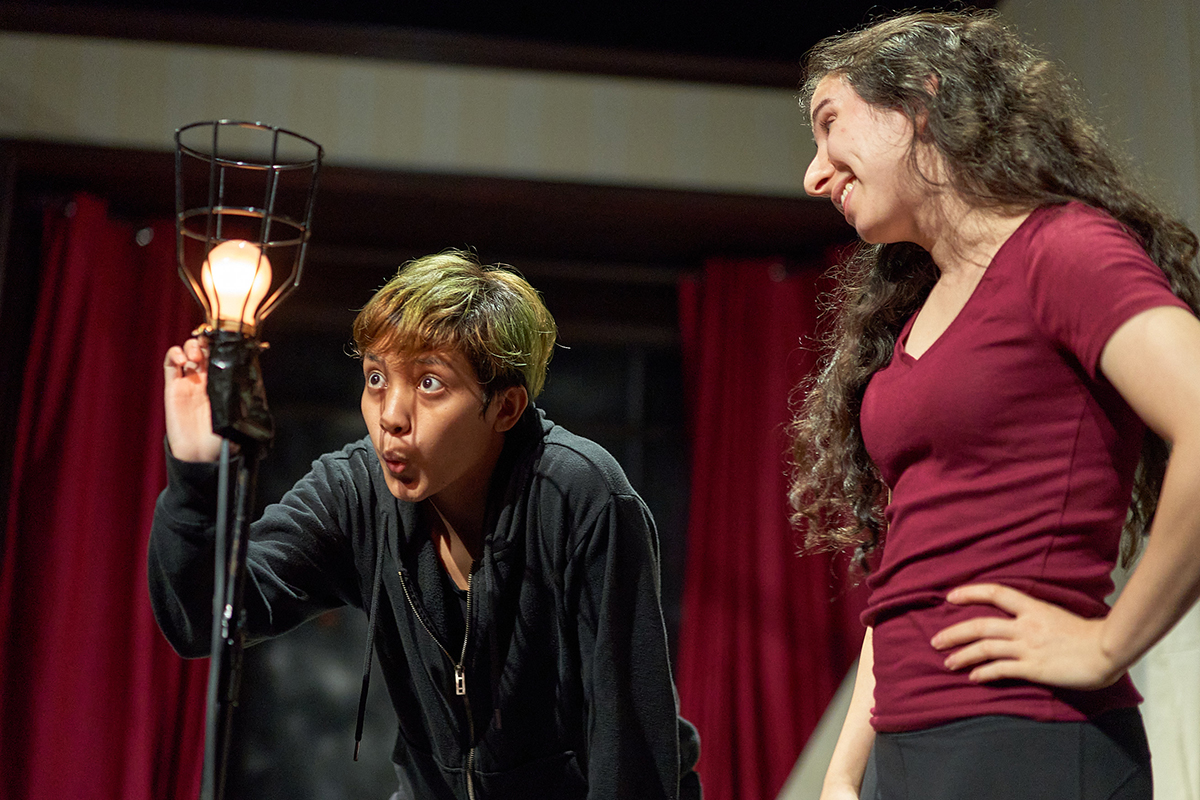 What I saw today from The Young Company was a promising batch of up-and-coming actors, giving it their all both onstage and offstage. The roles were well cast, with each of them understanding their characters inside out, and excelling in their performances, whether scripted or improvised. The cast also showcase good chemistry with each other and created strong rapport with the audience, helping bring the rarely seen history and aspects of the theatre to life, reminding us why we continue to love the theatre scene. Plaudits go to Daniel Jenkins for grooming them over the course of the programme, and Rob Jonston’s script giving them all ample opportunity to shine. Let’s not forget production manger Aude Albiges and stage manager Chantel Goh.

It is a play like this that shows how everyone in a company plays such important parts in a theatre, even with staff from SRT even making sure that we are safe throughout the experience. While the ghost light has been there to keep theatres lit during the times when we can’t be there, with this production, The Young Company has shown that there is certainly a bright light shining in these young talents, bringing the hope that Singapore’s youth theatre scene is brighter than ever.