Discover the intimate secrets of the Esplanade Theatre, as told through the ephemeral language of light, sound and space.

Under restrictive live performance rules, it was probably only a matter of time before we would see a show with no actors at all. And as strange and unconventional as that idea sounds, given a strong enough concept and capable team, the results are nothing short of spectacular.

All this is encapsulated in #THEATRE, a ‘site-specific conversation’ between the Esplanade Theatre and design collective INDEX. Comprising veteran designers Lim Woan Wen (lighting), Darren Ng (sound/music) and Lim Wei Ling (space), the ‘performance’ starts with us being led into the theatre. But instead of being ushered to the usual seats, it was almost surreal how we were brought onto the stage itself and allocated spaces to sit. All we could see and hear were each other and the sound of fans whirring, before they stop just as the performance began, and we were plunged into complete darkness.

A spotlight shines down on the stairs at the side of the stage, making it ‘glow’. Throughout the show, light is also cast on the red pipes all around, resembling arteries rich with blood, pumping through the theatre to keep it alive, keep it working. It almost seemed like we could hear a faint heartbeat. Looking around at the stairways in the theatre, we saw wires all around, and imagined the now-absent backstage crew working tirelessly, darting about as they prepare for each show and ensure everything is working properly. This then, is the idea behind #THEATRE – to choreograph an installation that seems to awaken the space, and make it come alive.

During this “performance”, my senses were on high alert, sensitive to all the changes around me, from every tiny sound to minor light change. Seeing the structure of the theatre, from the steel structure to the aircon vents, one thing I couldn’t help but notice was how empty it all felt. We turn to see a table with chairs while a fan is switched on, and we think of it as an area likely to be occupied by the stage manager and team doing the show. We notice what isn’t there, and how much is missing from our usual theatre experience. 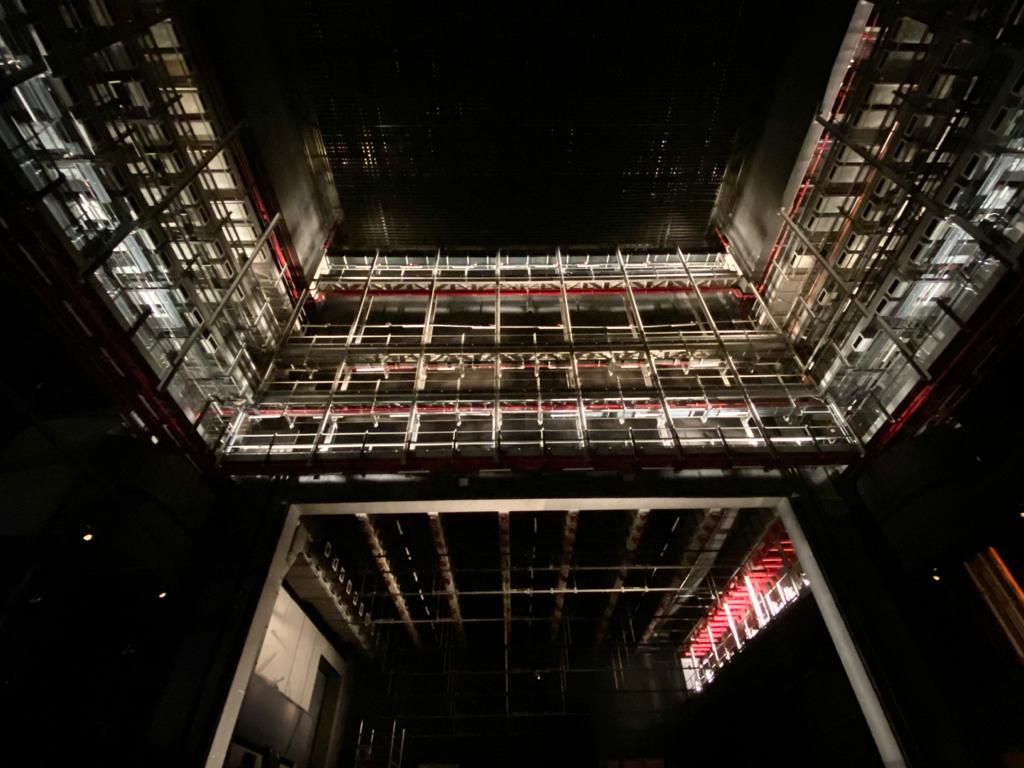 As the curtain at the back of the stage is raised, we marvel at all the equipment and paraphernalia, but mourn how little use they’ve seen over the past year. The lights illuminate the area around it, and we see and feel the towering height and vast depth of the space, only serving to emphasise its emptiness, the calm atmosphere bringing us to an almost meditative state. And as the wings are now revealed, we see rows and rows of unused lights, while transformers and cranes used to bring in big beautiful set pieces and fixtures are now at rest. Turning our attention to the top of the theatre, we think, oddly enough, of kueh lapis, with every layer integral to the space. 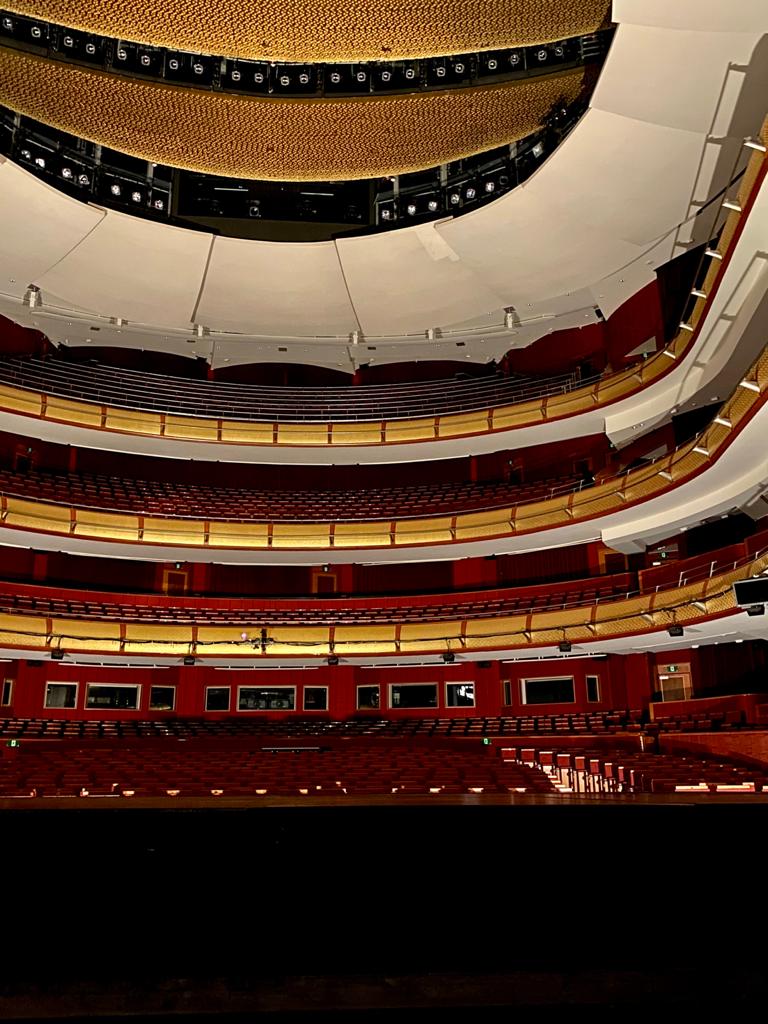 Now focused on the ceiling, we see signal lights blinking, almost like stars in the sky. It is almost hypnotic as the empty fly bars descend, with soothing sounds resembling wind chimes. We relax, and are now brought into this world, lying down, closing our eyes, and allowing ourselves to dream, the thought of these empty fly bars leaving a stark image in our minds. The main curtains open with a gentle sweep, allowing the light to slowly creep in and fall on the stage, and we imagine this to be the sight performers see just as they’re about to begin. In our mind’s eye, we expect to see a full house, but instead, are greeted by the haunting sight of empty seats before us. There is only the sight of the luxurious, beautiful wooden seats with plush red cushions, and the gold that gives the Esplanade its exquisite glow, bringing out the grandeur of the theatre. 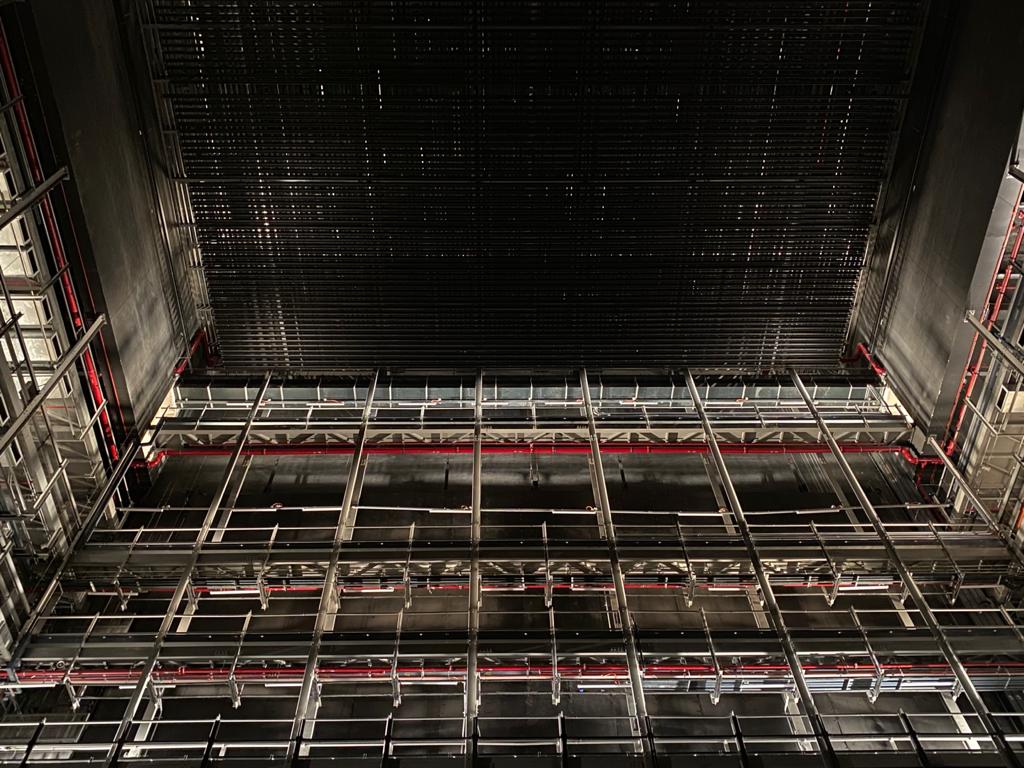 At this point, all I can think is: when will we see the day all 1950 seats filled with eager audience members? Gazing out, I imagine a full house, applause rising to a deafening roar, and see this as homage to the many audience members who have come through these doors and sat in these seats. The lights dim, and we are left only with exit signs showing us the way out, heralding the end of this experience. #THEATRE takes us on a journey, allowing us to reminisce all that we’ve missed about live theatre in these difficult times. But we know that one day, this will be nothing but a distant memory, where we will eventually come together and be reunited in the theatre again, laughing, smiling, crying, clapping and dancing in the aisles. Till then, we keep the dream that the theatre is alive, and anticipate the day it all can finally return to normal.