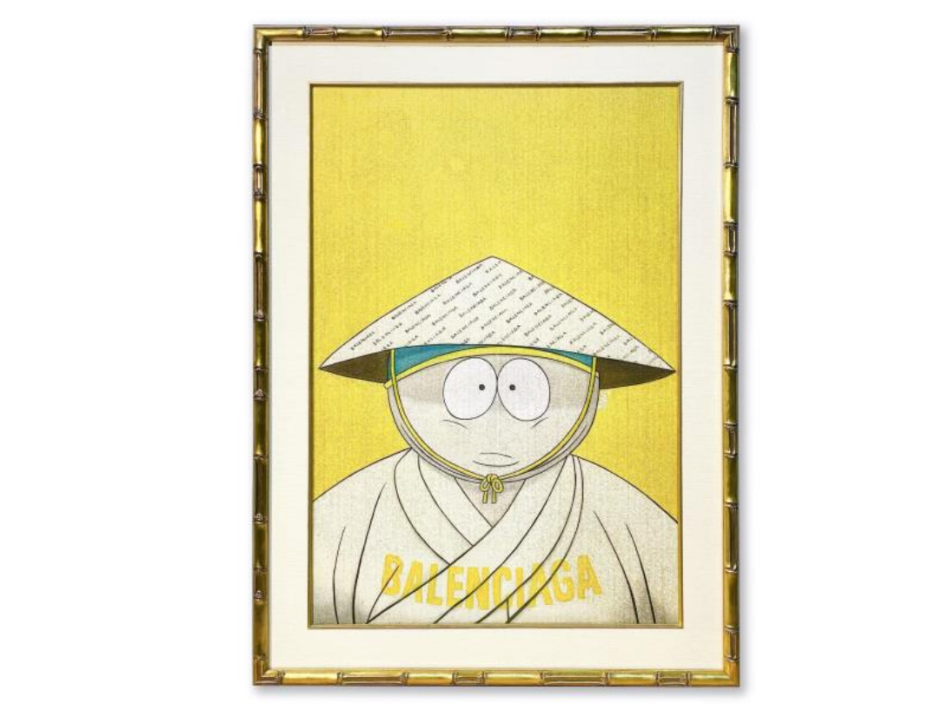 HONG KONG – The Stallery & L’Epicerie Fine HK are pleased to present an exhibition of new artworks by the Hong Kong based artist Ernest Chang at The Stallery WCH. Titled Bling Dynasty, the exhibition will feature a series of new works created using techniques drawn from Western and Chinese art and handicraft traditions, including silkscreen prints on plexiglass, resin and bronze sculptures, as well as traditional embroidery and calligraphy.

In Chang’s new works, instantly recognizable images from global pop and consumer culture—such as characters from well-known animated sitcoms and video game, and iconic logos from luxury fashion houses—are figured as central motifs within compositions that recall traditional Chinese artistic mediums, techniques and iconography. The resulting visual juxtaposition offers a tongue-in-cheek commentary on the dominating influence of Chinese consumer power on the global marketplace. By situating icons from Western pop culture into unmistakably Chinese compositions, these works also reflect on the ubiquitous advertising by global luxury brands to suit ever-changing trends and the shifting demographics with buying power.

Bringing together aesthetic and iconic motifs drawn from Western and Chinese culture, art, and traditions that appear to clash or contradict on first glance, Chang hopes to create a sense of harmony amidst chaos and uncertainty. “In these desperately confusing and lonely times, it has become more important than ever to gain a greater awareness of the world and reflect on our relationship to time and history,” comments Chang. “As our global landscape continues to shift along geo-political lines, I’ve been drawn to images and techniques from vastly different cultural lineages to make sense of the world and these works have allowed me to inject my vision of harmony into them.”

The upcoming exhibition will feature visual references from beloved animation and gaming titles, such as South Park, Rick and Morty, and Family Guy, which Chang fuses in his characteristic pop art style into recognizable iconography from Tang and Han Dynasty paintings.

Works on view include Don’t Say Anything Mean (2020), which reimagines a character from the satirical animated sitcom South Park wearing luxury designer clothing in a portrait inspired by the famous painting of Kublai Khan from the Yuan Dynasty. With this irreverent juxtaposition of an important work from Chinese art history and a contemporary cartoon, Chang reflects on coming-of-age in today’s society that is heavily influenced by mass consumerism, corporate advertising and the ever increasing array of entertainment and streaming platforms. For the artist, the modern obsession with luxury goods and designer clothing creates a sense of nostalgia, as if we have wanted these material goods since childhood, disguising the strategic capitalistic mechanisms that manipulate consumers’ emotions for profit.

Also featured in the exhibition is Let Me Have a Bite (2020), a large still-life embroidery piece recalling the compositions of classical landscapes by master Chinese artists such as Zhao Ji, Qian Xuan and Qi Baishi. Juxtaposing ferocious man-eating plants from a popular Japanese video game with the traditional iconography of Chinese scrolls, the work reflects on our transition from childhood to adulthood as a tug of war between the static and the dynamic.

In addition, the exhibition will present a new series of screen prints on plexiglass, a material which has become commonplace as a result of the Covid-19 pandemic providing both protection and a medium for communication through its transparency. Layering minuscule dots printed on plexiglass with colourful compositions underneath, Chang creates a parallax effect that invites viewers to step into his shoes as a colour-blind artist. Although they may appear complete from afar or when viewed digitally, visitors will be confronted with a surprising sense of depth and contradiction when seeing the works and these misaligned dots in-person, reflecting the artist’s colour-filtered perspective.

Chang has been exploring themes of contemporary mass culture and consumerism since 2018, beginning with his interactive series Tear & Consume: An Art Experiment, which invited visitors to tear and destroy ten layered paintings featuring well-known anime characters. A video of the destruction became a document of this ‘social experiment’ that showed participants’ readiness to physically “consume” these images depicting icons from pop culture which were in fact unique art objects that were painstakingly created by the artist.

Following this experimental performance, Chang started to juxtapose global pop visual culture with those from classical art in his Famous By Proxy exhibition in 2019, which featured works that superimposed manga and anime characters onto iconic paintings from the Renaissance and Neo-Classical period. By quoting and referencing imagery from both art history and pop culture, Chang invited viewers to question the hyper-consumption of everything from “high art” to “low art” within contemporary society through this visual paradox.

0 comments on “Art What!: Ernest Chang’s Bling Dynasty at The Stallery, Hong Kong”