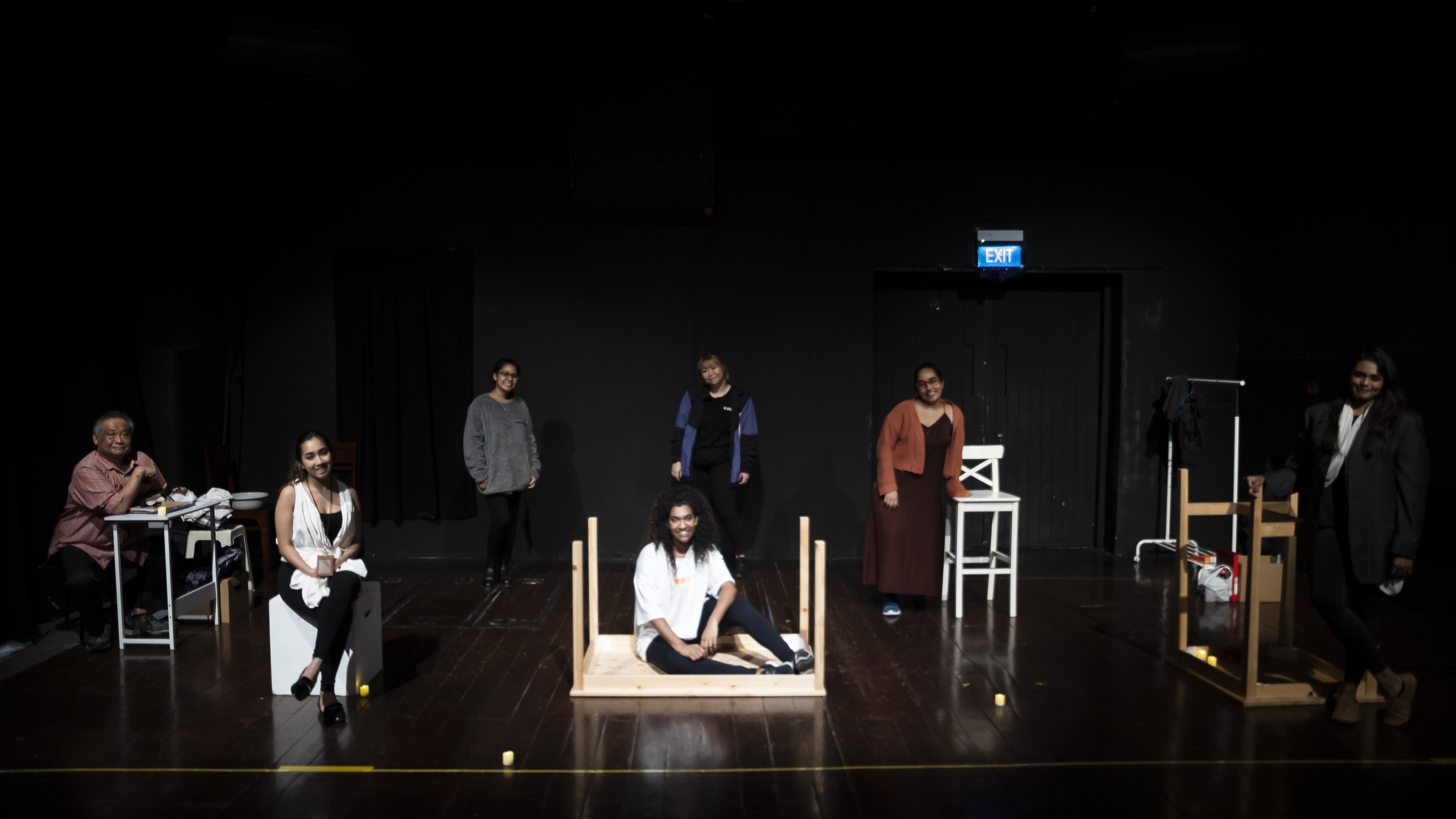 Metatheatrical performance blurs lines between rehearsal and performance, and our ability to see the big picture.

Written by A Yagnya and directed by Alvin Tan, new company Bridging the Gap makes their debut with subTITLED 1.0. Described as ‘exploring the intertwining stories of three women’, we watch as they each grapple with their choices when faced with the execution of a man for drug trafficking. But from the moment the show begins, we realise that things are about to take on a more metatheatrical slant, as a means to complicate our perception of reality, and provide us moral dilemmas to contend with.

As we stream into the Substation, cast members Rebekah Sangeetha Dorai, Melva Lee Ke Ying and Indumathi Tamilselvan are already onstage exchanging casual banter with each other. It feels as if we’ve transgressed the space, as audiences watching and listening in on the actors talking about their day. The doors close, and Yagnya walks onstage to start the ‘rehearsal’, and blurs the line between actor and character. Yagnya then remains onstage for the rest of the play as the playwright, constantly typing away at her laptop, as if what we see before us is her thoughts being brought to life in real time. 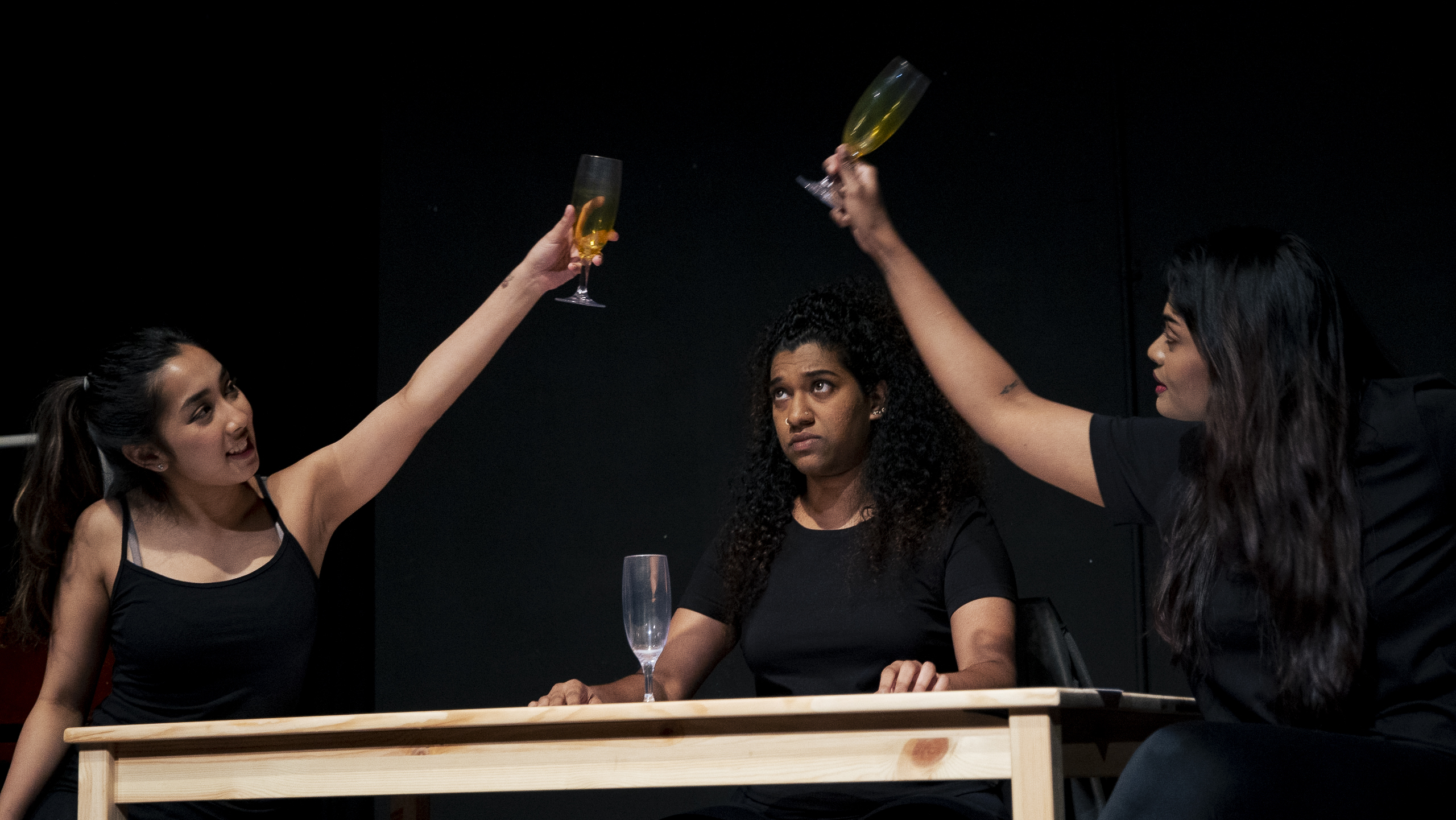 The three women of subTITLED are criminal lawyer Prem (Sangeetha) who chose not to defend the accused; arts company intern Liting (Melva) who witnessed the crime; and activist Priya (Indumathi), who is also the daughter of the accused. As the cast breaks into an opening number, as they sing about the weight of drugs, and how many grams would warrant the death penalty.

Even if we didn’t have any strong feelings on the death penalty before, subTITLED brings out an emotional slant to the issue to make us care, in part because of Priya. As she speaks in Tamil, distorted music plays in the background, emotional as she folds up her father’s clothes and holds up a picture of him. The sheer weight of the loss bears down on her as she fights her father’s hopeless case, and even struggles to get help with even financial aid, highlighting the pitfalls and unforgiving nature of the system.

On the other hand, Prem vents her anger at the bar, torn between her morals and her obligations to her job, and what she stands for, as a human being wanting to show empathy for a fellow person. Yet she holds tight to her Catholic faith, almost in the hopes that it balances out with her amoral actions.

This stands parallel to Liting, who displays the hypocrisy of impressing her boss while lamenting her frustrations about the job, forcing herself to do everything possible to rise up in the ranks in the hopes of getting her dream gig. It is when the characters interact with each other that their clashing beliefs come to light and bring out the underlying tensions the play seeks to reveal. 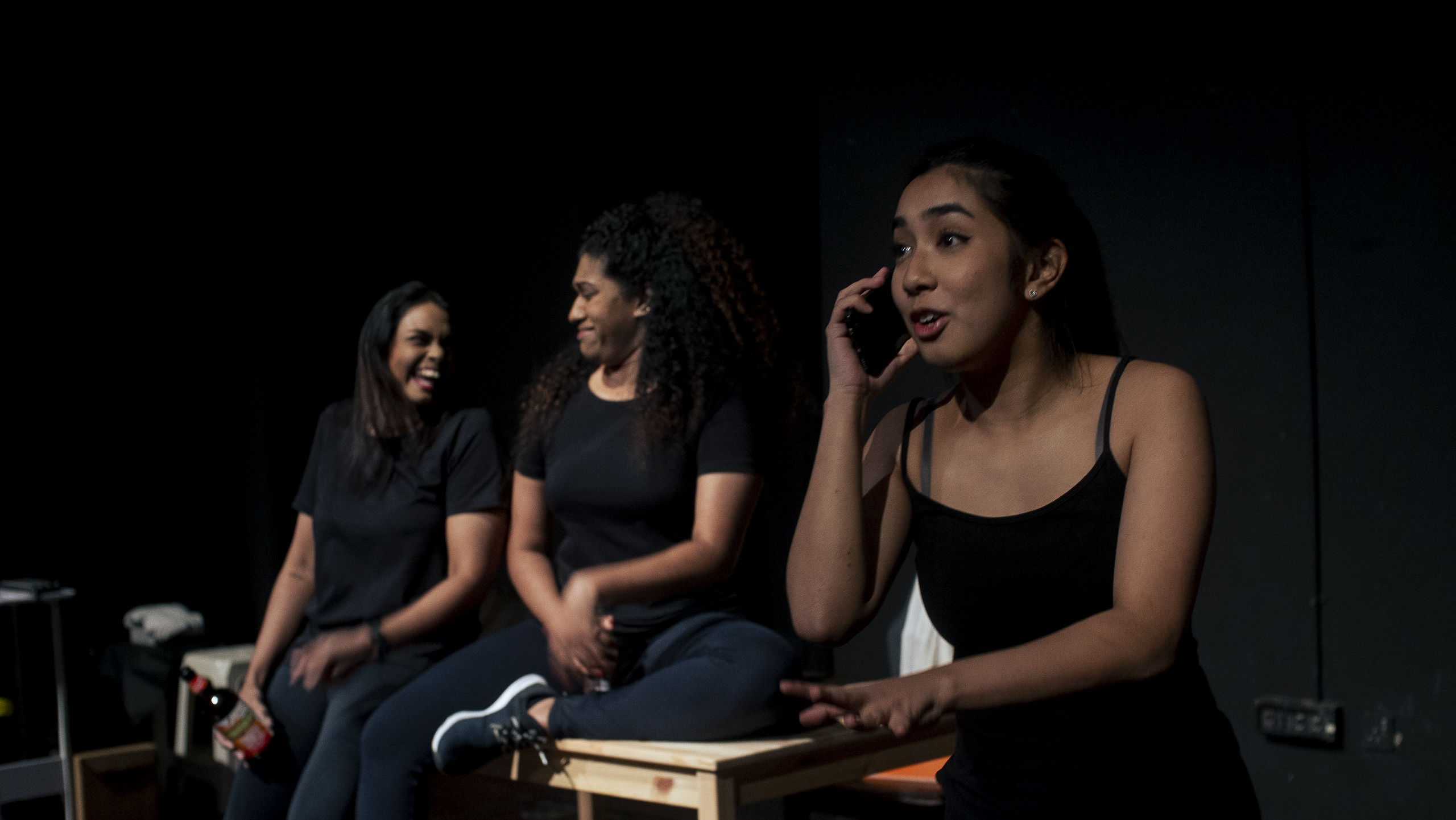 The play is further complicated when they break character, and we now see the three actors onstage, one faced with her own difficulties and discrimination, bullied by the other two, shouting for help. We have invested ourselves so much in the story that we forget it’s just a rehearsal, and we wonder how often we become to engrossed in the details to see the wider scope. As Yagnya comes to break it up, we wonder how much of what we see is ‘real’, and how much of it is being produced. Throughout the performance, we are also prompted to answer questions, guiding us towards understanding the difficulty of fully siding any one of these characters.

As we are now taught the guidelines of how we can use the national anthem, we remember how the actors repeat 6am over and over earlier on in the play, and how ironic that the national anthem plays at the same time each morning as the executions, with how ‘justice and equality’ are sung as criminals hang at the gallows. We watch as a vigil is held, the characters all trying to come clean with themselves and make sense of all the complications the play has presented us with. With so many factors and considerations, the line between actor and character begins to blur, and we see them being affected by how much they’ve invested into the emotional depth of their roles, the act of performing and playing them forcing them to reflect on their own internal moral dilemmas.

As Yagnya stops the play, with no idea how to bring it to a close or what purpose it serves, we wonder if subTITLED 1.0 has too many ideas it is attempting to weave together, with its meta-theatrical elements vying with the main story for attention rather than complementing it. Still, these chinks in an otherwise interesting play can easily be ironed out, while Yagnya, Melva and Indumathi, newer voices and faces to the arts scene, all show off how much potential they have. As a work-in-progress, subTITLED has at least achieved this: to remind us of how important it is to create conversation to shed light on a given situation, and lend clarity to us, as discussing art-making, moral dilemmas, and the difficulty of doing the right thing in our increasingly complex world today.

subTITLED 1.0 played at The Substation from 17th to 20th February 2021. Look out for Bridging the Gap’s next production, Cyril and Michael in June 2021, with more details to be released soon.