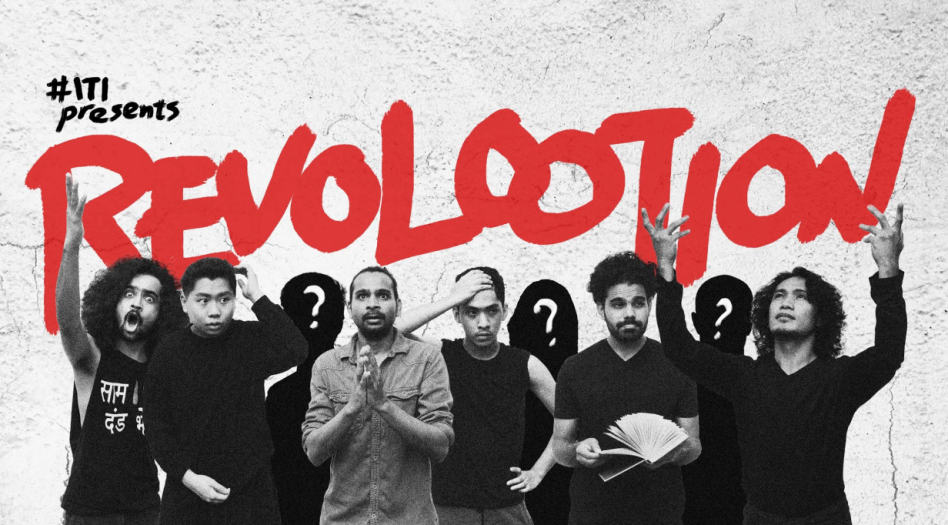 Doom is inevitable, but perhaps we can learn how to make things less crappy.

When you think of a theatre course’s graduating show, forum theatre isn’t the first medium you might think of. But as far as showcases go, it’s a medium that provides a surprisingly large number of ways by which to challenge graduates, from quick-witted improv skills to the ability to immediately embody a character when replaying a scene.

All of that is put to the test with RevoLOOtion, the brand new devised forum theatre piece by the latest batch of graduating students from Intercultural Theatre Institute. Directed by veteran theatre practitioner and experienced forum theatre maker Li Xie (The Classroom), RevoLOOtion is set in a simpler time before smartphones and social media, in a rural village populated by just 100 people. The biggest issue? They share just one toilet between them.

Naturally, this becomes point of contention when the government suddenly announces that they’re about to tear it down the next day. Left with very little time and a whole lot of panic, it’s all the villagers can do to make a last ditch attempt to save their precious toilet – with a protest.

As a forum theatre performance, audience members are expected to participate in the show itself. Prior to entering the theatre, we were asked to choose one of three roles we would later play during the show – a villager, a bulldozer driver, or a public service officer. Seated in three safely-distanced groups, it was a nice touch that the team had even differentiated the seats each character sat on, such as foldout chairs for the builders, and office swivel chairs for the officers.

Even with its minimalist aesthetic, Puny Life Form’s set design is effective in transporting us to RevoLOOtion’s rural setting, with a realistic looking ‘sacred river’, colourful shirts and loose pants adorning clotheslines above, and a giant wooden throne, reflective of the toilet’s significance to the village. There is plenty of detail even in the props, such as the inclusion of old-timey rotary phones.

Over the course of the performance, we are introduced to the six characters who become privy to the news of their doomed toilet. All six actors are given stereotypical roles they can quickly embody – Kewal Kartik as an orphan with nothing to lose and everything to prove; Lin Jiarui as the new villager who just wants to keep a low profile; Marvin Acero Ablao as the village elder afraid of rebelling against authority; Sandeep Yadev as the carpenter who wants his family to be ok; Aaron Kaiser Garcia as the angry upstart; and Sonu Pilania as the privileged, educated one who believes he can solve the problem through reason and negotiation.

With their different modes of thinking, the villagers naturally come to loggerheads as they each attempt to solve the problem in their own way. With their actions and miscommunication, all of this only ends up complicating the situation, making the final outcome messier than it should have been.

The scenario itself doesn’t push the actors too far in terms of their acting chops, but the real challenge lies in the actual forum theatre portion. Facilitated by Li Xie, Chng Xin Xuan and Chng Yi Kai, in their groups, audience members discuss how they might have handled interacting with the villagers better, and put it to the test when the cast ‘plays back’ each scene. Doing this demands the cast get back into the same emotional heights they had without the buildup, while also showcasing their improv skills in reacting to these new, unpredictable ‘cast members’ thrown into the mix.

During the actual audience participation segment, there is a valiant effort on the cast and facilitators’ part to ensure that some possibility of change occurs. The villagers end up holding a town hall, the builders attempt to negotiate a deal, and the public service officers try to smooth things over with an interim solution. But the more we watch each other attempt to make those changes, the more we realise that in the bigger scheme of things, there’s nothing that can be done about a foregone conclusion – the toilet will be destroyed, regardless of our actions.

What RevoLOOtion leaves us with then, is a reminder that what we can change is the little things, the moments of empathy we create when we interact person to person, as opposed to constantly thinking of it as a battle between the disenfranchised commoners and the faceless bureaucrats. It is when we start thinking about making a difference in our own small way, by choosing kindness, by choosing empathy, and by choosing collaboration to do what we can within our power, that true revolution can finally happen, rather than a foolhardy fight one cannot win. Ultimately, RevoLOOtion offers a different dimension from ITI’s usual physical theatre/experimental pieces, and perhaps, signals a need for students to create more socially relevant, community-driven work in future.

RevoLOOtion ran from 29th April to 1st May 2021 at Goodman Arts Centre Black Box. There are tickets available at a different location on 7th and 8th May, click here to contact ITI on WhatsApp (6338 5133) if you would like to make a booking.