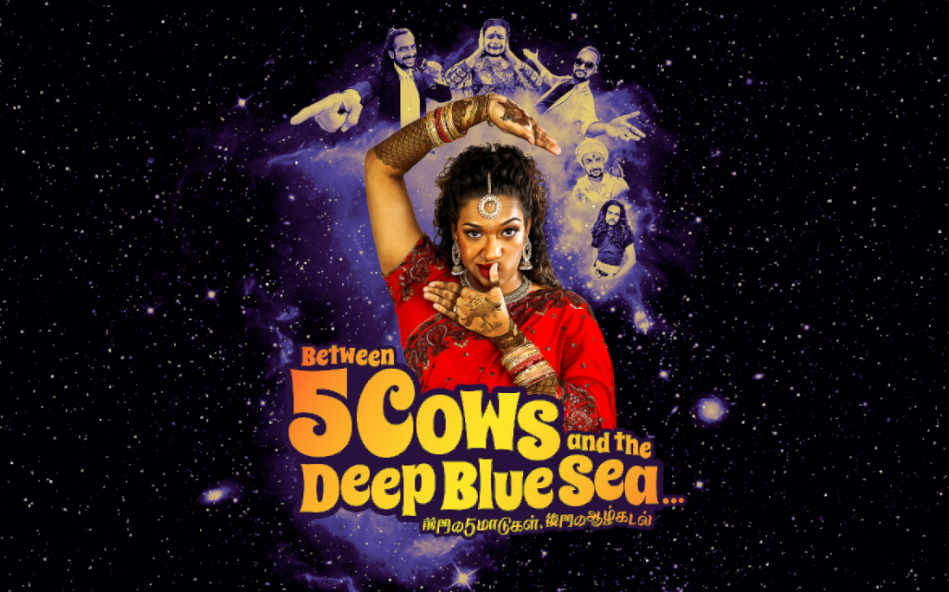 Interrogating the confused, multi-faceted identity of the modern Indian woman in a meta, self-reflexive play.

In 2022, a person is no longer defined by their race and culture alone, each individual containing a multitude of identities within a single body. But coming to terms with that can be difficult when stereotypes and tradition continue to restrict the expression of such multitudes and exploration, one that is expressed in A Yagnya’s new play Between 5 Cows and the Deep Blue Sea.

Playing as part of the Esplanade’s Kalaa Utsavam – Indian Festival of Arts, Between 5 Cows and the Deep Blue Sea is an introspective play where the unnamed Girl (Indumathi Tamilselvan) grapples with the prospect of feeling adrift and lost, single and looking for a partner to moor her. In doing so, suitcase in hand, she finds herself caught an out of this world gameshow to help her find potential partners, each one proving worse than the last as she swipes left over and over again.

Co-directed by Yagnya and Alvin Tan, these initial scenes are a mostly light-hearted introduction to the issues faced by the modern woman, with the cast of potential suitors specifically curated to reflect certain familiar archetypes, from a financebro to a desperate basement-dweller. There are some fun uses of multimedia and staging to create clever illusions, such as video footage of Kewal Kartik dressed as each and every one of these dates projected onto strategically-placed frames that make full use of the stage. Kewal himself plays the role of the gameshow host, and brings a manic energy to all he does, hyping the audience as Girl frantically picks items out of her luggage while trying to find as many ways as possible to describe herself, before cartoonishly disappearing offstage via zipping himself into a giant suitcase-like set piece.

Midway through the show however, 5 Cows and the Deep Blue Sea abandons its initial gameshow plot and becomes something else entirely. The play itself becomes self-aware, as playwright Yagnya herself appears in the form of a voiceover, questioning the point of the play and why she is even using it as a means of processing identity. In response to Yagnya’s doubts, Girl starts to ask questions and pass commentary aloud, such as explaining and defending why she can speak Japanese and enjoys Japanese culture. With Girl essentially becoming an extension of Yagnya herself, the audience then is forced to see the play as an almost self-serving exercise for Yagnya to process her own doubts, and makes the play itself feel unfinished rather than fuel our own discussions.

Amidst this confusion, there are some wonderful opportunities here that the design team takes advantage of, especially with Jevon Chandra’s multimedia design, where Girl interacts with a digital, hand-drawn bird onscreen, or a spiralling flood of words begin to appear onscreen to show how Yagnya herself was drowning in her own intrusive thoughts. But at the end of the day, Yagnya’s decision to delve into this post-modern format instead deviates and distracts, going on for almost a third of the runtime. There are even times where the script decides to start delving into issues of sexual assault, which while important, seem to come completely out of left field and are not fully elaborated on or linked to the greater arc, and seem to be inserted for the sake of it, further making the script feel incomplete and revealing Yagnya’s own insecurity at writing. While the vulnerability can be sympathised with, the play becomes overshadowed by her and her intrusive thoughts, perhaps even to the extent of throwing in half-finished ideas and her own inner monologue to pad the runtime. Indumathi, as much as she tries to play a fictionalised character in the form of Girl, can no longer be fully separated from being reduced to a mere mouthpiece for Yagnya to speak through, self-serving as compared to allowing the character to live her own truth and restricted in her portrayal.

The true heart of the play lies in Girl/Yagnya’s relationship with her mother, and early on, there is a innocuous scene where her mother is represented by a crude figure, reduced to a nagging, traditional stereotype lumping her old-fashioned views and expectations onto Girl. But later on, after finally overcoming her insecurities over her script, Girl decides to seek solace in her mother once again, now played by Kewal in a sari. In listening to her mother’s stories, and in recounting her own childhood memories of dating and crushes (including a particularly hilarious but familiar case of being friendzoned by a Chinese boy), there is a newfound respect for her mother in understanding how she was shaped by her circumstances, progressive in her own way without having to conform to the modern day standards. Girl realises that every generation has its own newfound problems and conditions to contend with, the definition of traditional and modern shifting with time, and learns to accept her own share of difficulties, ending by being determined to carve her out own path and unique identity in life.

Between 5 Cows and the Deep Blue Sea may for the most part, get lost in the torrent of fears and insecurities experienced by its own playwright, but it is bookended by a strong, whimsical start and a heartfelt ending that manages to salvage the emotional core of the play. With strong design elements and a two-person cast that manage to grapple with the difficult material they are presented with, this is a play that has potential to be further sharpened into a powerful work for the modern woman, inspiring confidence in the present and the strength to find one’s self amidst all odds.

Between 5 Cows and the Deep Blue Sea… played from 25th to 27th November 2022 at the Esplanade Theatre Studio. More information available here