Myanmar born Taiwanese film director Midi Z makes a triumphant return to cinema after his 2014 film Ice Poison (selected as Taiwan’s entry to the Academy Awards for Best Foreign Film in that same year) with his new film The Road To Mandalay.

Starring Wu Ke-Xi and Kai Ko (You Are The Apple of My Eye), The Road To Mandalay follows a most unusual love story between two illegal immigrants as they cross the border from Myanmar to Bangkok in the hope of a better life. Trafficking herself across the Mekong River in a truck, Lianqing (Wu Ke-Xi) drifts from one dead-end job to another, and becomes increasingly desperate to get proper identification papers for better job prospects. Along the way, she meets and begins to date Guo (Kai Ko), a boy from her hometown in a similar position to her, and as their lives becomes increasingly intertwined while in her heart, completely disparate, their love is doomed.

Wu Ke-Xi delivers an incredibly relatable performance as Lianqing. Although a mostly quiet role, all one needs to see what Lianqing is going through is the expression on her face. In a scene where Lianqing attends a job interview, the camera pans to her face as her friend (translating for her) speaks with her potential boss. As we hear the conversation stretch on, we watch her face deliver subtle ticks and changes ever so slightly to reveal her frustration and deep seated disappointment as an initially hopeful prospect quickly tumbles into failure. Throughout the film, Ke-Xi keeps up Lianqing’s fierce independence and determination, her ambition burning fiercely on even as life throws a constant series of wrenches into her plans. On the other hand, despite playing a romantic lead again, Kai Ko’s role is significantly different from the cheeky, bright-eyed boy of mainstream films past, instead taking on a more pragmatic, survivalist role in this film. There’s an almost feral way that he plays Guo, a wild, primal delivery in his voice that marks a new maturity to his acting, no longer a teen but a working class man finding simple joys in life. 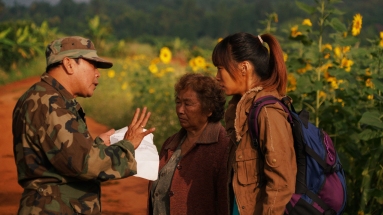 Midi Z’s script is brutally real, displaying many of the struggles an illegal immigrant faces and never romanticising it, the almost objective, cold way he thrusts his characters into increasingly difficult situations filling viewers with an immense sense of pain watching these protagonists fall into depression, with nothing we can do to help them. Although for the most part a naturalistic film, there are times the world of The Road To Mandalay drifts into almost surreal scenes. The cotton factory Lianqing and Guo work at is adorned with long spools of cotton thread, a working class dreamscape where the soft texture of cotton is contrasted against the cold grey factory walls, almost dystopic with how Lianqing is reduced to a number, no longer referred to by her name by the factory foreman. Midi Z even allows the occasional sense of joy from time to time, with the workers partying it up outside the factory one day, splashing water at each other and dancing in glee.

Overall though, the entirety of The Road To Mandalay is still laced with a lethal dose of fear and tension, where anything could happen to completely disrupt characters’ plans, or completely turn their lives around in the most unexpectedly bleak ways. Time seems to pass more slowly in the film with the numerous long, languorous shots that focus on characters lying deep in thought, or capturing entire scenes with few cuts in between, emphasizing, in particular, Lianqing’s constant feeling of being stuck as her life crawls by. Even as Guo continues to support Lianqing emotionally, the sheer weight of the world and her circumstances feel so pressurizing, it’s no wonder she eventually resorts to increasingly wild measures to achieve her goals.

The Road To Mandalay is an intimate, haunting look at the tragedy of circumstance, and will leave you reeling with its shock ending, after the slow, careful buildup to make you fall in love with and root for its protagonist in all her struggles. Midi Z has crafted what is almost certainly the strongest, most cohesive film of his career that will weigh down viewers with its heavy heart and savagely realist, alternative take on a doomed romance that speaks volumes about class struggle and the futility of hope.

The Road To Manadalay is in UK cinemas 29th September