The Addams are one of the most recognizable fictitious families around. Even if you don’t know them by name, you’ll probably know them by face, caught while channel flipping or in a Halloween costume. Familiarity like that lends a steady hand to hold the newest iteration of The Addams Family together, allowing audiences to feel a sense of comfort from the moment they hear the opening notes of the theme song and notice the iconic Hand creeping out of the letterbox.

In this new UK touring production of the musical, The Addams Family has gotten more tight-knit than ever, showcasing stronger familial dynamics and bonds amongst the kooky characters and an infectious sense of macabre humour. Although Marshall Brickman and Rick Elice’s narrative still wears a little thin over the 2.5 hour show, it’s buoyed by an incredibly capable cast completely committed to their roles. This infuses the otherwise one note characters with a delicious energy that could bring the dead back to life with their strong performances. 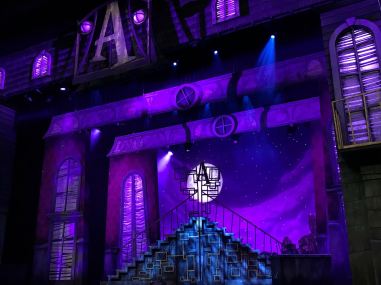 The strong ensemble of Addams ancestors have now also been given distinctive personalities, taking on various historical and cultural figures from a ballerina to an Elizabethan look-alike (each given their own thematic music when first introduced). Designer Diego Pitarch deserves high praise for the intricacy of detail afforded to the costumes and makeup, as well as an unforgettable set. The Addams mansion is straight out of a Gothic-horror film, while ‘The Moon and Me’ was set to a glorious, romantic starry backdrop as Fester Addams (Cory English) danced with the lithe, graceful Lavinia Fitzpatrick (as the Moon).

Undoubtedly though, the entire production is anchored by the believable relationship between Gomez and Morticia Addams. Both Cameron Blakely and Rebecca Thornhill truly made their characters their own, each commanding stage presence in their own way while sharing an alluring onstage chemistry as the husband and wife duo. “Tango de Amor” practically sparked off fireworks in our hearts as we watched them tango passionately across the stage, making us believe in the possibility of a long-lasting relationships once more. Meanwhile, Dale Rapley and Charlotte Page as the more benign Beinekes provided a good foil to the Addams, perfectly portraying the image of the stereotypical all-American family.

With plenty of joyous numbers that’ll have you smiling each time the music starts up, there’s almost the sense that there’s a little black magic at work to have made this such an enjoyable performance. As a touring production, it can be difficult to adapt to a new space each time. But with its formidable production team of Music & Lyrics Limited Executive Producer John Stalker and Aria Entertainment Company Director Katy Lipson, The Addams Family has done well to help the cast settle in and make each new theatre feel like coming home to the Addams mansion.  So well that without a doubt, at the end of the night you’ll surely find yourself snapping your fingers along to that catchy-as-hell theme song.

The Addams Family plays at the Mediacorp MES Theatre till 3rd December 2017. Tickets available from SISTIC

0 comments on “Review: The Addams Family presented by Mediacorp VizPro”