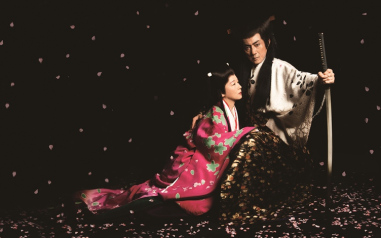 It’s hard to believe that a single play can hold the power to leave such an impression on an audience member that it can even be considered life-changing. But this is in no way an exaggeration of how the unique experience of watching a play by the late Yukio Ninagawa. The thunderous applause and standing ovation a Ninagawa play receives is completely warranted.

NINAGAWA Macbeth was last seen in Singapore 25 years ago at the 1992 Singapore Arts Festival, seven years after it became the first Ninagawa interpretation of Shakespeare to be staged internationally at the Edinburgh Festival. Feeling that Japanese actors dressed in Western period-costume could never do Shakespeare justice, Ninagawa instead turned to original interpretations of the Bard’s plays, and was heavily inspired by Akira Kurosawa’s film Throne of Blood (1957), itself an adaptation of Macbeth set in feudal Japan amidst bloodthirsty warlords.

In NINAGAWA Macbeth, Ninagawa retains Shakespeare’s original names and utilises Yushi Odashima’s direct Japanese translation of the text while transposing it to 16th century Japan, yet the famed ‘Scottish play’ feels strangely at home in this foreign context. At times, it even brings out the tragedy’s themes more strongly than the original ever did, its story of a general betraying his king carrying an even heavier moral weight, given a samurai’s strict adherence to loyalty in the ‘bushido’ code of honour. 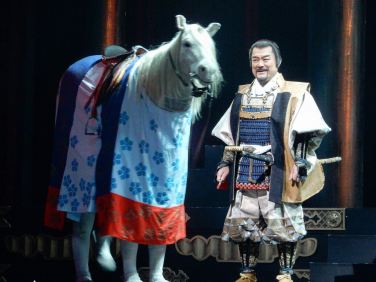 But beyond its setting, NINAGAWA Macbeth is simply put, a masterpiece of modern theatre. As one of Shakespeare’s more famous tragedies, Macbeth follows the eponymous (Scottish) general’s rise to kingship following a harrowing prophecy, aided by his power-hungry wife and leaving a trail of bodies in his wake. NINAGAWA Macbeth stuns from start to end, and its ritualistic opening sequence is already arresting, as two elderly Japanese ladies make their way down the aisles. As they slide open the heavy wooden doors to unveil the set, audience members become keenly aware of the staged nature of the play: Macbeth is cursed, locked in an endless cycle of violence and bloodshed each time these doors are opened.

Each and every scene and costume is carefully constructed to fully immerse the audience in the magnificent world of pale-faced, kimono-clad witches frolicking around altars, while disgraced soldiers are dwarfed by towering statues of warlords. Macbeth and Banquo ride on realistic horses (each played by two actors) who nod their heads and stomp their feet, while the encroaching darkness of Macbeth and Lady Macbeth’s private quarters is a stark contrast to the expansive, golden halls of King Duncan’s grandiose castle. One feels that the stage extends throughout the entire theatre as soldiers frequently enter from the aisles bearing banners, while special effects such as the haunting image of Banquo’s ghost manifesting at the banquet are so smooth, you can practically feel a shiver as you imagine the supernatural at work.

Instead of creating distance, the anachronistic replays of Gabriel Faure’s Requiem and Samuel Barber’s Adagio For Strings serve instead as a melancholic refrain throughout the entire performance, underscoring newly pertinent themes such as the fragility of power and human mortality. These themes are further emphasized by the astounding centrepiece of a cherry blossom tree that marks the backdrop to Banquo’s murder and Birnam Wood, the ensuing pink blizzard at once a beautiful symbol of spring, yet a stark reminder of life’s transience in their fall.

In an incredible feat so rarely achieved by any other Shakespeare production, one feels almost inclined to side with both Macbeth and Lady Macbeth. There are moments where one senses genuine love between the two as they celebrate their bloody ascent, their megalomania translating to onstage affection. Yuko Tanaka’s portrayal of a woman of class and charm corrupted by the allure of power created a palpable chill in the air, particularly as we watched her mercilessly goad Macbeth into action before descending into madness against dim candlelight later on.

Masachika Ichimura brings across an unnerving despair to his Macbeth’s moral struggle, displaying an evident contrast between his former masculine strength and his later shell of a man, plagued by hallucinations before retreating into quiet resignation, alone and mad. The play’s melodramatic and stylized actions and delivery are traits that work surprisingly well for NINAGAWA Macbeth, and the final choreographed fight scenes are pure theatrical perfection. One almost feels a hint of relief emanating from Macbeth as the last breath leaves his body, a poetic end to his psychological suffering once and for all.

As the cast took their final bows in front of a photo of Ninagawa, one truly felt moved by his lifework, stunned by the sheer amount of imagination that went into this play and the production value that’s second to none. Impeccably staged and precisely executed, NINAGAWA Macbeth is a triumph of theatre and elevates the Scottish Play to unprecedented heights, a true work of art that lays testament to the impact and legacy that the late Japanese theatre titan has left behind.

0 comments on “Review: NINAGAWA Macbeth by The Ninagawa Company (presented by Esplanade – Theatres on the Bay)”