In Bhumi Collective’s latest production, they’re breaking new ground as they deviate from plays to explore the medium of performance research lecture. Bringing together practitioners/researchers, the collective aims to use the series to question and critique performance practices of today, and present to the public the research process behind it, opening up new opportunities to prompt further dialogue and discussion. 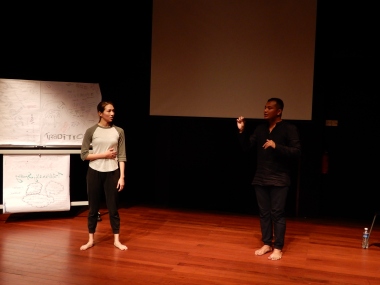 In their first production, titled Traditionally Speaking, Malay dance practitioner Muhammad Noramin Bin Mohamed Farid and Chinese dance practitioner Elizabeth Chan team up to present their shared findings and exploration of their respective dance forms, drawing evidence from each form’s history and practice, as well as their own experience with it. Taking the form of a dialogue with each other, Traditionally Speaking sees the two engaging in cultural exchange with each other, as they compare and contrast the traditions in dance, and to what extent one may be allowed to deviate from its core philosophies without overstepping boundaries.

But make no mistake, this isn’t your usual dreary lecture. Like any first time meeting with a new teacher, Noramin and Elizabeth ease audiences into the lecture by introducing themselves and their first encounters with traditional dance in a section titled ‘Personal Histories’. Adopting a casual tone, big histories and underlying concepts behind each form become digestible and understandable to a lay audience, helped in part by both performers’ visual aid in demonstrating steps and moves typical to each culture. It is from here that they then use their personal histories to leapfrog to discussing greater ideas of dance’s history itself, and its evolution over the years across regions as each practitioner proceeded to make it their own. This is helpfully illustrated with videos of Malay Dance used in films from the 50s, as well as the vestiges of Chinese Opera and folk dance traditions that still live on in Chinese Dance.

In the second part of the lecture, the two performers explore concepts of ‘Gender and Aesthetics’, and how much wriggle room is available for deviation from form. Historically speaking, male and female dancers stick clearly to their ‘gender roles’, with ‘drag’ played either for laughs or when it becomes a key plot point (in the case of Mulan). But Noramin points out an interesting hypocrisy in dance education – though it is frowned upon for male dancers to perform ‘female’ movements and vice versa, it is important to know the distinctions precisely to avoid overstepping those grey boundaries, and for the many male teachers out there to be able to impart that knowledge to female students, to be able to perform femininity as much as masculinity.

In the final part of the lecture, the concept of the ‘Traditional’ is explored, and the performers briefly touch on the ongoing tensions between purists and innovators who choose to stretch and play with the form itself. Earlier on in the lecture, Noramin and Elizabeth perform an ‘experiment’, as they attempt to improvise a performance on the spot using their respective dance forms. However, the twist comes when the music it is set to is the opposite of what they’re used to, with Noramin improvising to slow, emotional Chinese music, while Elizabeth improvises to Malay music instead. It is these examples that prove there is still plenty of room for innovation within restriction, and potential for intercultural exchange and understanding to strengthen both dance forms.

Traditionally Speaking is a fascinating and accessible look at the parallels between Malay and Chinese dance, and sheds some light on the intersections that traditional dance has potential to experiment with. One ends up believing that there is still plenty of room for discussion and exploration of both forms, and continue this exchange of culture and knowledge with this conversation that Bhumi Collective has started. In future editions of Intersections, we look forward to the collective’s continued efforts to find links between different cultures and practices, and the underlying interconnectivity between us all.