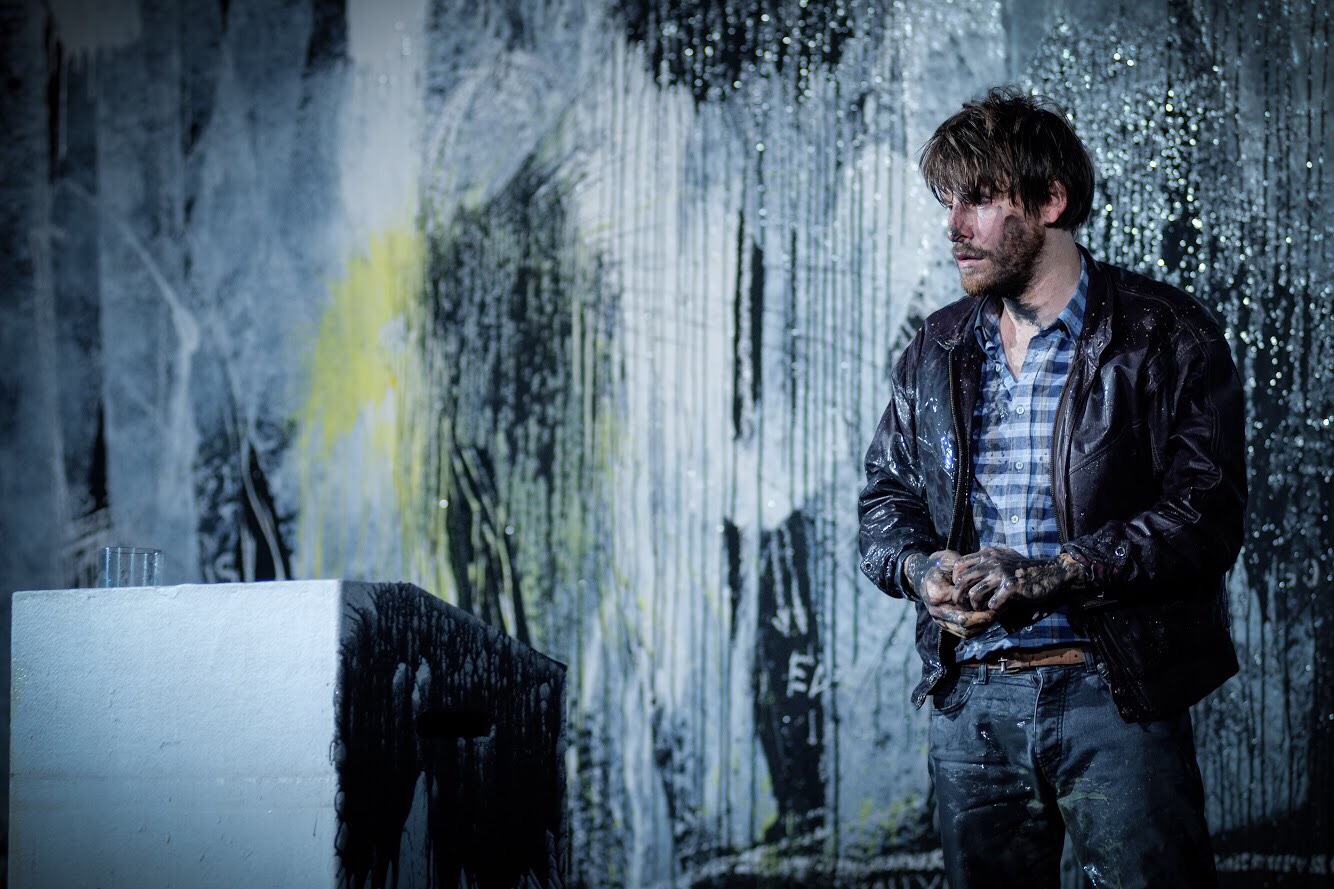 A contemporary version of Ibsen’s play effectively brings out its newfound urgency and relevance in our crazy, messed up modern world.

Henrik Ibsen’s An Enemy of the People was initially considered one of his minor works in his lifetime. But in recent years, the play has seen an increasing number of stagings and new interpretations, and come to represent a disturbingly prescient rallying cry for the uncertain, messy political and social climate all across the world today. Perhaps most frightening of all, it has come to ask one of the most frightening questions: has democracy failed us? 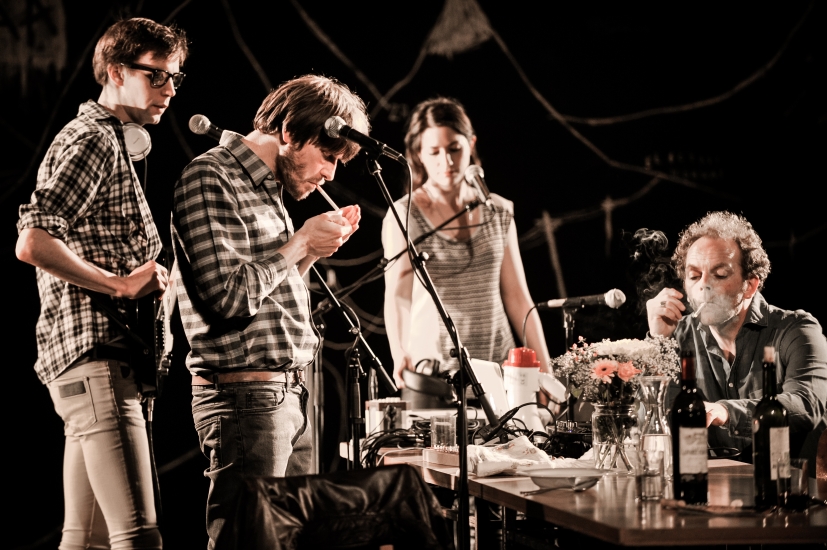 In esteemed German director Thomas Ostermeier’s contemporary take on the play, Dr Thomas Stockmann (Christoph Gawenda) is now a younger man than in Ibsen’s original, with an equally young wife (Eva Meckbach) and infant in tow. They live in an house with walls scrawled with chalk drawings, are part of a band who sing covers of songs like Gnarls Barkley’s ‘Crazy’ and David Bowie’s ‘Changes’ (immediately bringing to mind the themes An Enemy will tackle), and dress in hip leather jackets and plaid shirts. It’s an unabashed tribute to the disenfranchised upstart generation of today, seeing and saying the faults in society, and always on the brink of starting revolutionary change.

As with the original script, scientist Stockmann only wants the best for the small, provincial spa town he lives in, and takes it upon himself to expose the shocking truth when he discovers that the town’s baths contain polluted, disease causing water. But it is these same baths that bring in the town’s tourism revenue, and his crusade for the truth comes under fire as his councilman older brother stops at nothing to bring him down, and transform him into the eponymous ‘enemy of the people’. 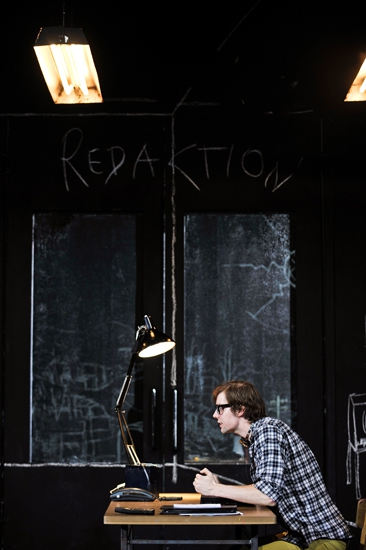 In watching Gawenda’s spirited portrayal of Stockmann go from enthusiastic, would-be hero and whistleblower to broken, defeated pariah, one cannot help but feel a sense of creeping dread and paranoia. Those he once trusts betray him one by one, each swayed by coercive tactics from his manipulative older brother (Konrad Singer). His truth is buried under a mountain of lies as the media has its hands tied by blackmail, while his own father-in-law (a very militant, authoritative Thomas Bading, complete with German Shepherd in tow) attempts to weave a conspiracy theory around him. There are no longer any permanent alliances, and a permeating sense of disillusionment as one realises that all sense of morality has left, with every man acting acting out of their own selfish interests and self-preservation, no longer sparing a thought for the ‘greater good’. 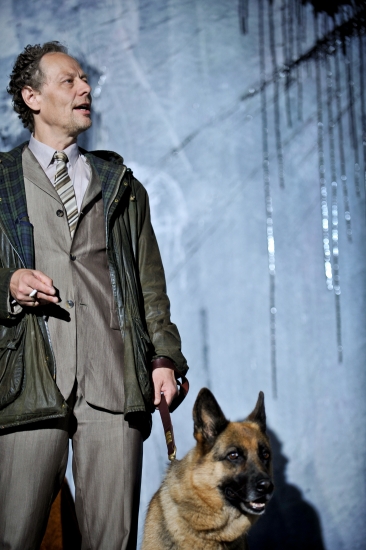 All the uneasiness and uncertainty is only enhanced by the strong chemistry between each and every member of Schaubühne Berlin’s experienced ensemble, knowing exactly how to build up that keen sense of camaraderie when they jam together as a band before crushing that friendship as they each begin to turn on Stockmann. Jan Pappelbaum’s scene transitions are smooth, moving like clockwork as the space expands and contracts simply by raising or dropping a set of lights, and it always feels like we’ve entered a completely different space in each scene. The set itself undergoes a literal, physical ‘whitewashing’ just before Stockmann rises to the stand to make a powerful incendiary speech based off French anarchist tract The Coming Insurrection. With reality itself appearing so murky and painted over, even we are momentarily unsure if there really is truth left in his words, or these are simply the rants of an obsessed madman, out to oust those in power or truly pushing for a post-democratic society. 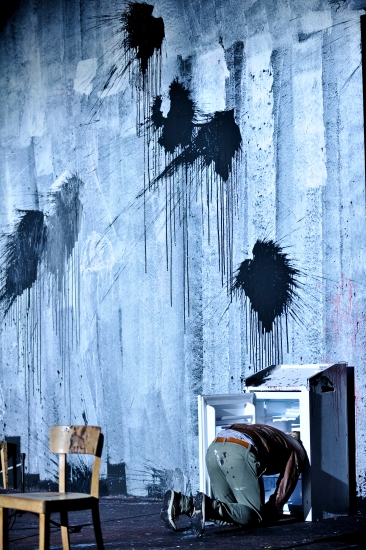 What follows is the most revolutionary, innovative directorial decision by Ostermeier: As Stockmann calls forth a town meeting to read his report of the polluted water, he breaks the fourth wall as the house lights come on and the audience becomes the townsfolk, encouraged to participate and yell their opinions surrounding this heated debate. But Ostermeier cleverly deviates from specifically talking about the baths, sidestepping it such that Stockmann’s speech instead surrounds how society itself has been poisoned, full of corruption and the failure of democracy. As well prepared for any situation as the cast were though, it’s a shame that the responses from our local Singaporean audiences were lukewarm and shallow at best, unable to truly enhance the debate beyond a shouting match against the cast. Either way, once the debate concludes, we’re treated to a magnificent scene as cast members pelt Stockmann with paint bombs and super soakers, smearing the once white walls yellow, as his own reputation is left completely and utterly in shambles.

A vivid depiction of the pitfalls of the mob and our broken social scene, An Enemy of the People is a powerful performance, exposing deep seated fears of our own lack of agency within a political system that has failed us and a fundamental disbelief in the objectivity  and reliability of anything and everything we might hear or read. One cannot help but feel a sense of loss and sympathy as we watch Stockmann and his wife pick up the shares bought up by his father-in-law, each taking a swig of their beer as they consider sacrificing everything they’ve fought for for the sake of their young family. It’s a question that lingers in our minds long after the stage fades to black, as we take a moment to consider how even the strongest man has his breaking point when faced with the nihilism of society.

An Enemy of the People plays at the Esplanade Theatre on 11th and 12th May as part of SIFA 2018. Tickets available here

0 comments on “SIFA 2018: An Enemy of the People by Schaubühne Berlin (Review)”