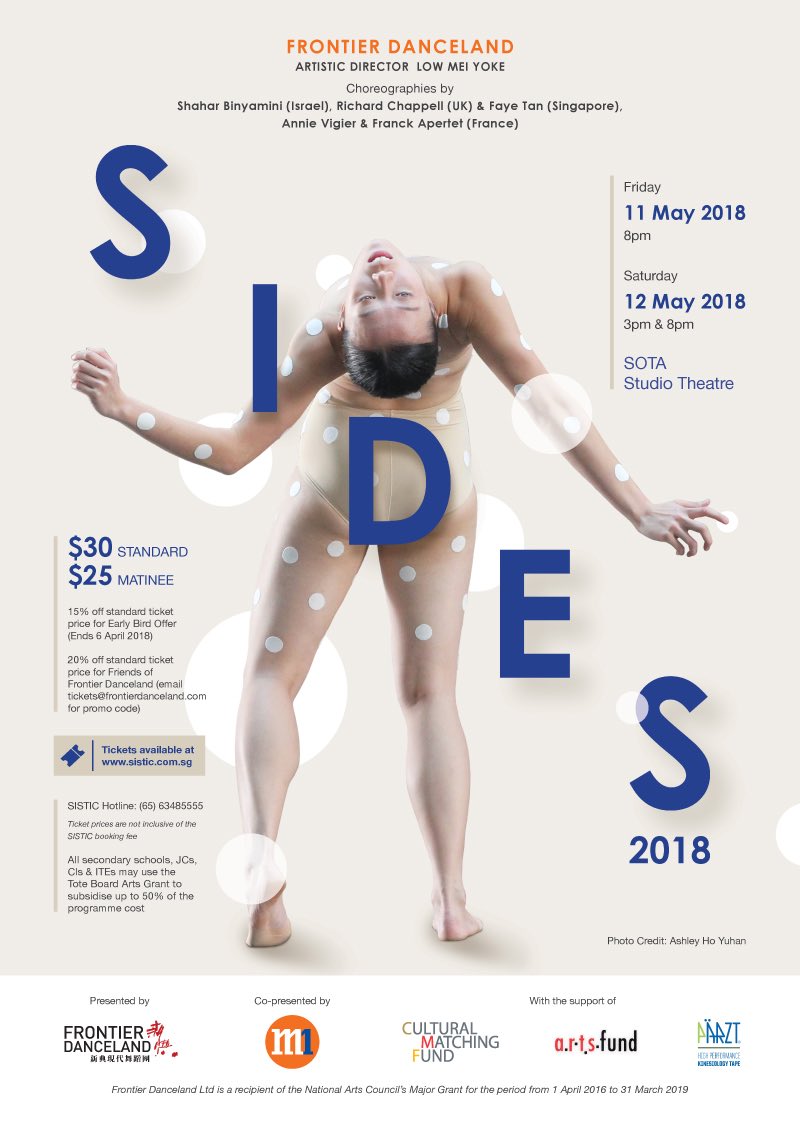 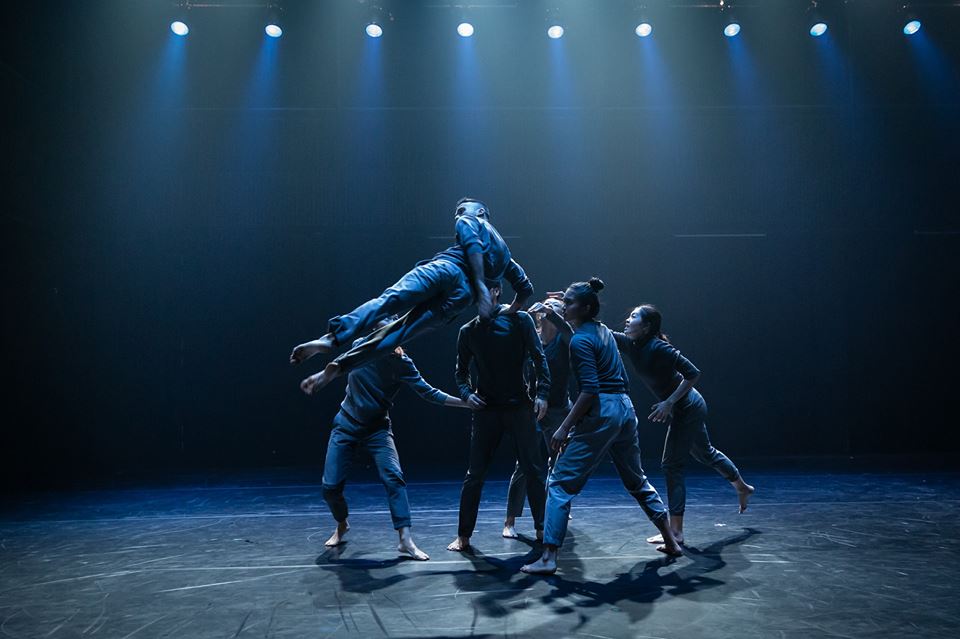 As with any contemporary dance work, there is never any concrete, clear cut story that the choreography imparts, instead, one should always allow our minds to run free and imagine our own interpretations with the unique movements seen in each work. Each of these three works required the dancers’ full commitment to each role in making sure that the work gives audience members the impetus to grasp what each piece is all about. In addition, lighting designer Gabriel Chan was integral to crafting lighting that set the mood of each piece, from bathing the dancers in shadow to illuminating them in brilliant light. 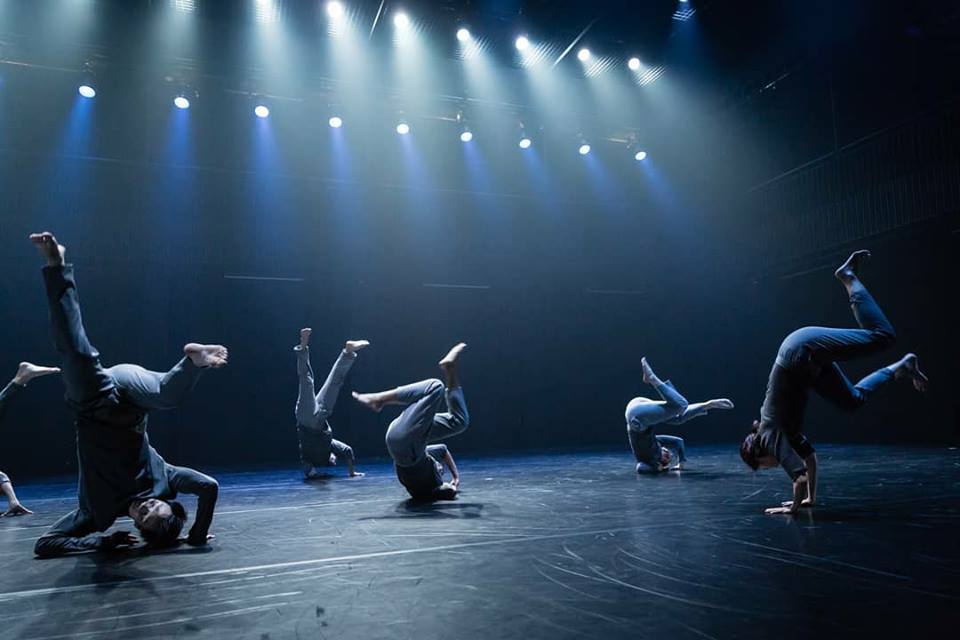 In the first piece, Richard Chapelle and company artist Faye Tan’s The colour of there seen from here dealt with ideas of human distance, and how proximity to others in the same space can have various effects on each other. This was a physically demanding piece, all about landing precise measured movements to capture the essence of each moment – each figure and every movement is always clear to see from every angle. 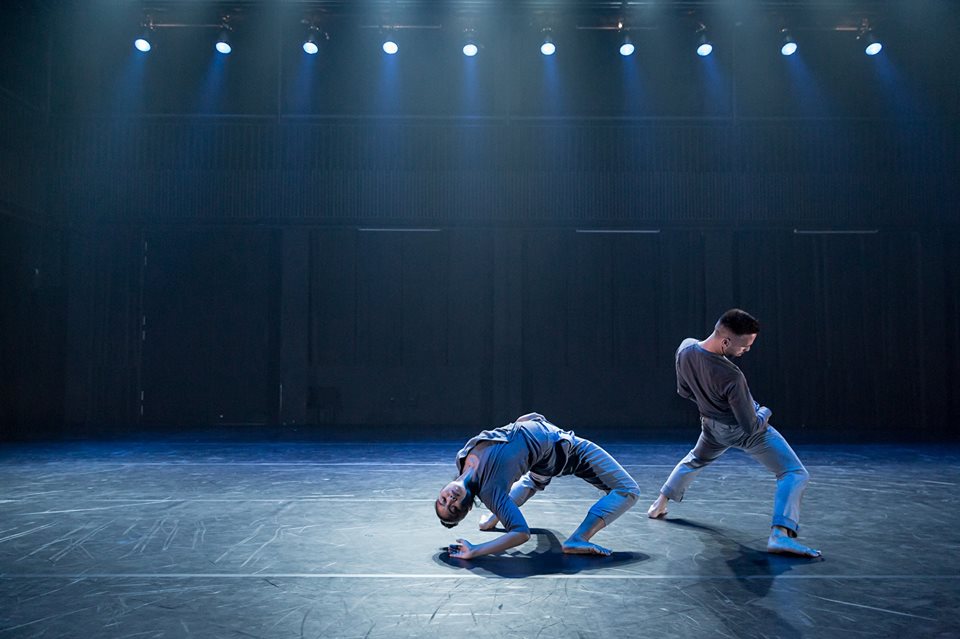 As mentioned, much of the work revolved around dancers portraying the difficulty and effects of coexistence – in trying to coexist, one must maintain a delicate balance of movement and emotion, at times leading to a level of frustration that may affect us in negative ways. Movements come together as the dancers explore the spaces in between each other, essentially a journey about finding the physical means of expressing the difficulties and sometimes, even the joys of the company of others. The dancers did well to show the doubts they had during this ‘journey’; as Keigo Nozaki looks up to the sky as if looking for a divine sign, he is still pulled in many directions, showcasing how even the apparently simple task of getting to know each other and becoming intimate can be a struggle. Ultimately, even as they seem to find familiarity with each other as they grow closer together, a distinct sense of fear still runs through the piece, as they end fading into darkness, once again finding themselves lonely individuals even within the group. 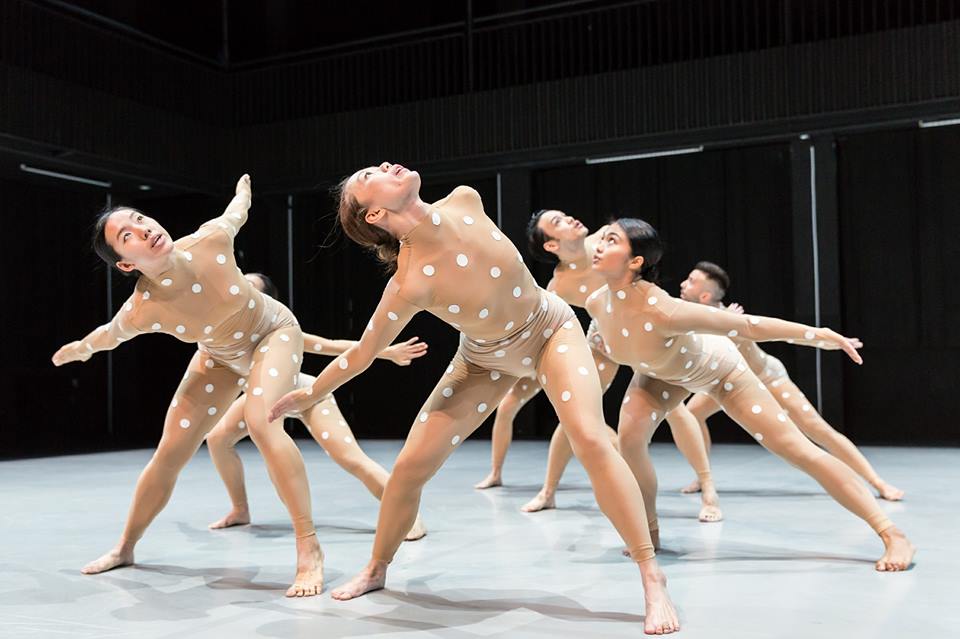 In the second piece, PARADISO, Shahar Binyamini presented a group of dancers dressed in skintone costumes, each one decorated with multiple white dots, as if to resemble tribal markings to represent their unity as a single group. It’s no surprise then, that this work was about showcasing a futuristic world of bionic humanoids forming a post-human tribe. Shifting between shades of elegance and the grotesque, dancers moved to perform ritualistic, ‘forgotten ceremonies’, and question the very meaning of what paradise itself might be. 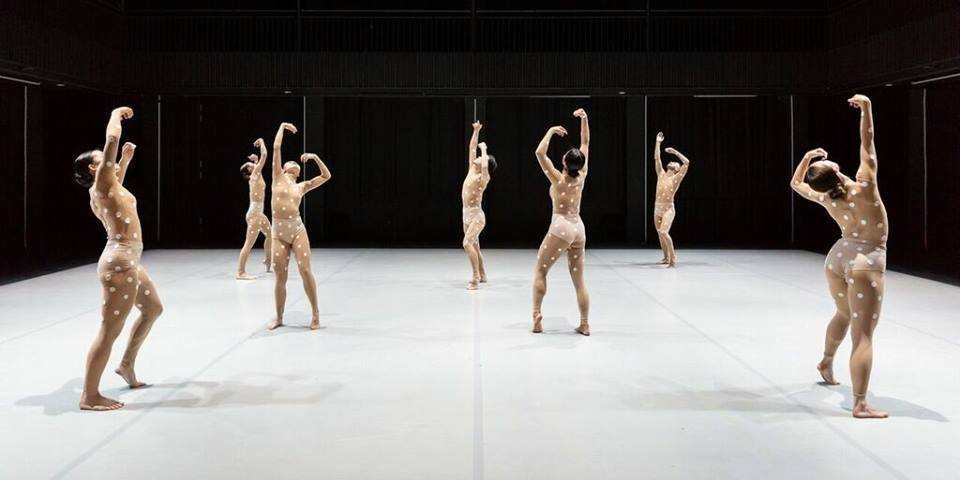 With the similarity in appearances, the dancers established themselves as products of the same world, yet also distinguished themselves as distinctly not quite human, with simple, alien movements that slowly grew to become more difficult. Watching them learn how to follow movements together is hypnotic, and almost made us want to join in their strange steps as well on the dancefloor. As they began to chant ‘1, 2, 3, 4′, mere movement became ritual, a forceful call to find synchronisation with in each other as they struggled to unite. Paradise then, has a different meaning for each member of this tribe, and as the canvas was illuminated by a flood of purple lighting. One felt that the space had become almost club-like, a disturbing delirium of conforming represented by the dancers’ robotic and mechanical movements, leaving us uncertain by the end of the piece as to how we might be able to retain our individuality despite society’s call to conform us. 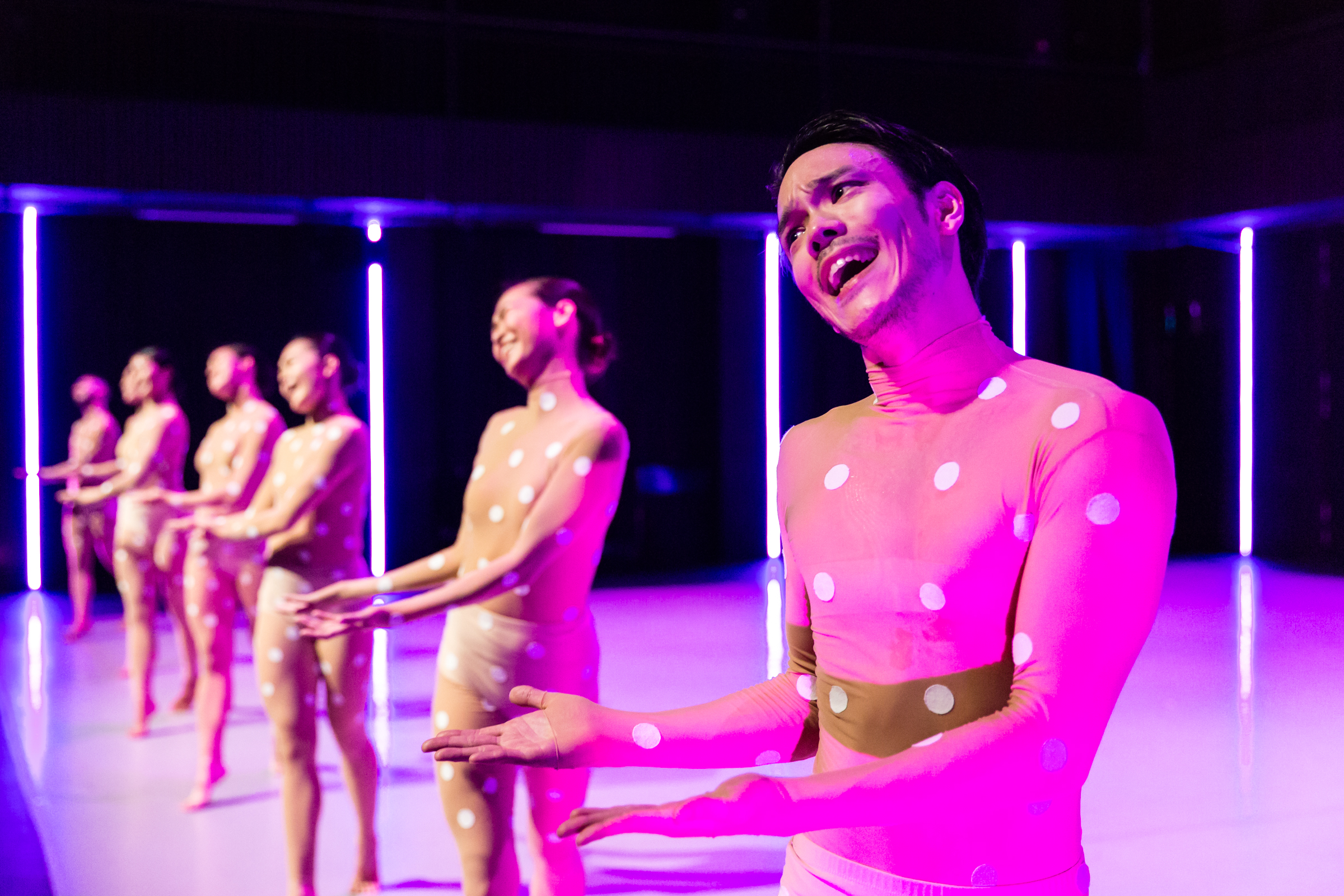 In the final piece, Annie Vigier and Franck Apertet’s “Dead Bodies” according to X-Event protocol Les corps morts (2006), we were treated to an unusual structure as some of us were sent out into the foyer to witness this piece. Dancers were each given their own pedestal to lie upon, in seemingly uncomfortable positions, and we too found ourselves uncomfortable being sent out of our comfort zone into the heat and standing up.

Dead Bodies feels more like an art installation in a museum rather than a full choreography, as we were given the freedom to explore, roam around and observe different angles of the performance and form our own interpretations, as each dancer began to rise and slam themselves down onto the boards in quick succession. Each time, they land in awkward positions, and the cries and screams of tiredness and pain resonating from them was disturbing to listen to, each time they hit the pedestals is like a physical attack. One then thinks of both the physical and mental limits of the human body being tested here, almost as if making a meta-commentary on how dance itself aims to push its participants to their very limits, masochistically doing so anyway to achieve some form of artistic greatness. Every few seconds, the dancers would also move around the canvas and change positions before resuming their self-torture, almost like how one might splash paint onto a canvas and bringing a different perspective and dimension to the piece each time. As they lay there motionless, breathing profusely, it showed their perseverance in making it through to the bitter end, and the trials and tribulations a dancer goes through in life to achieve their artistic goals.

Ultimately, as an audience of contemporary dance, one enters as a blank canvas, and enters a social contract with these dancers to explore the world they’ve created and decide on the interpretation behind each piece yourself. No two people enter and leave feeling the same way, and SIDES 2018 captures the very essence of contemporary dance in the right way – the right to express one’s self in any way you want.

Sides 2018 played at the SOTA Studio Theatre from 11th – 12th May 2018. For more information on upcoming Frontier Danceland shows, visit their website here