The Necessary Stage and Drama Box present a rich script about the poor and destitute, discomforting as it shines a spotlight on the invisible people we turn a blind eye to.

How often do you have to think about whether you can afford your next meal, or how much you can save by taking a series of free shuttle buses from mall to MRT to mall? For some people, this is their daily reality. Coming hot on the heels of the recent parliamentary speeches on inequality, The Necessary Stage and Drama Box’s latest collaboration Underclass is timelier than ever, shedding light on some of the complicated issues that plague the lower depths of society while touching on the increasing lack of concern those in positions of privilege might have about them. 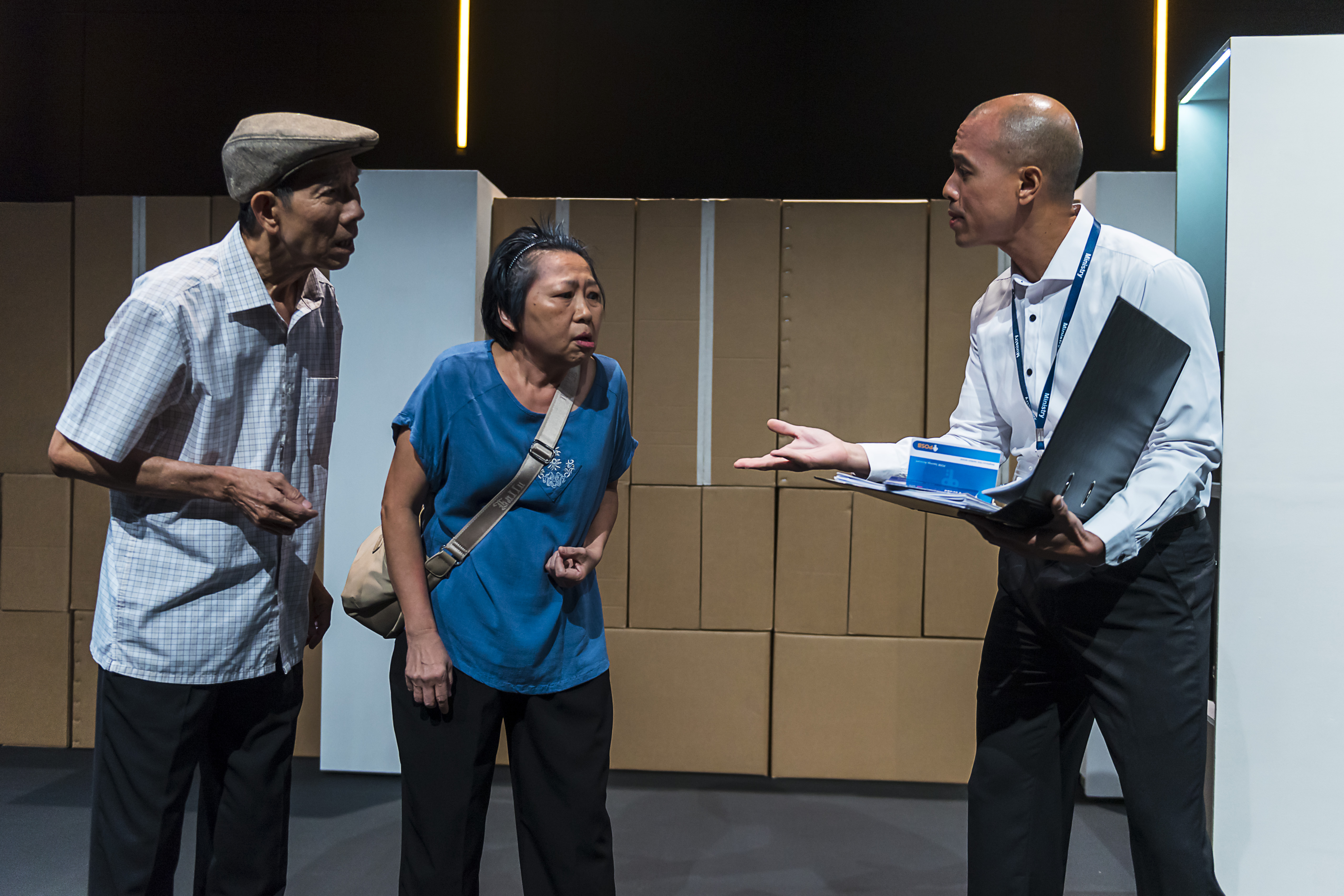 Directed by Alvin Tan and Kok Heng Leun, and written by Haresh Sharma, Underclass is by no means an easy watch. Throughout the play, as a member of the middle class, we’re shifting uncomfortably in our seats as we bear witness to the real, believable scenes that play out before us. Even before it begins, Goh Guat Kian is already in character, dressed in shabby, ragged clothing as she goes around the audience selling tissue paper, reminding us of the many times in real life we might have felt guilt from turning down a similar person out of inconvenience. Guat Kian’s character, as we find out, is Xinyi, a down and out ex-secretary, losing her job, then her flat after she suffers a stroke. Estranged from her only living family with little savings, she moves into a rental flat in the ghetto-like Lorong Lima and befriends 25-year old Johari (Yazid Jalil). Together, they strive to make sense of and survive each day of their life. 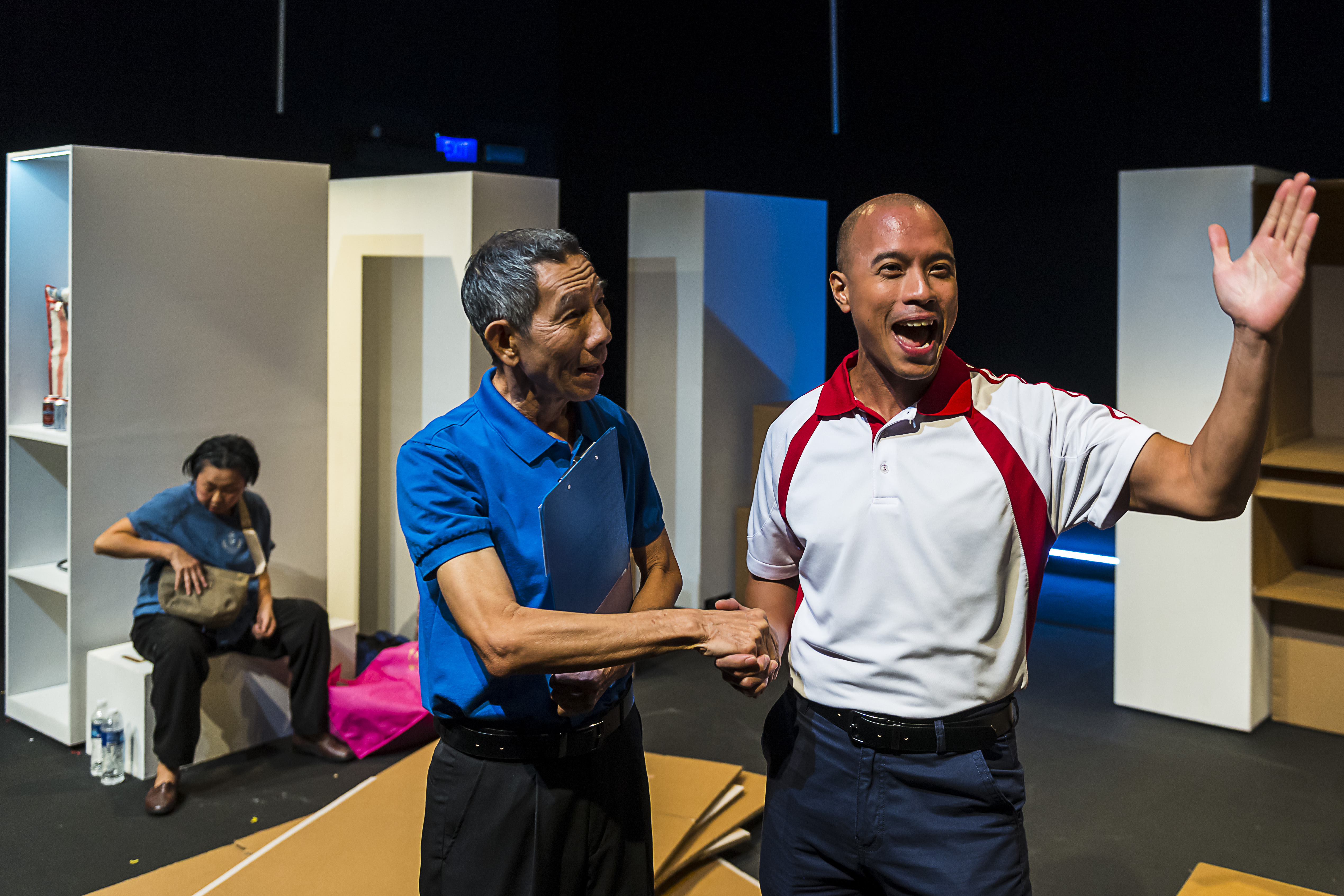 The world of Underclass is at once recognizably Singaporean – we’re introduced to familiar characters such as a charismatic, pretentious minister (Brendon Fernandez) and a social enterprise entrepreneur (Siti Khalijah). As much as each of these characters are trying to help in their own way, Underclass reveals the inherent difficulties in finding a fair and useful solution for all – Xinyi herself refuses acts of charity from her friend Yuan (Yang Shi Bin) for the sake of dignity, while Siti as entrepreneur Lisa is forced to shut down her social enterprise when it goes awry. The idea of class is revealed to be a far more complex problem than finances alone, and these issues only become more pressing and urgent as the play’s General Election draws ever closer, and the hopes and pressures of potential for change emanate from each and every character. 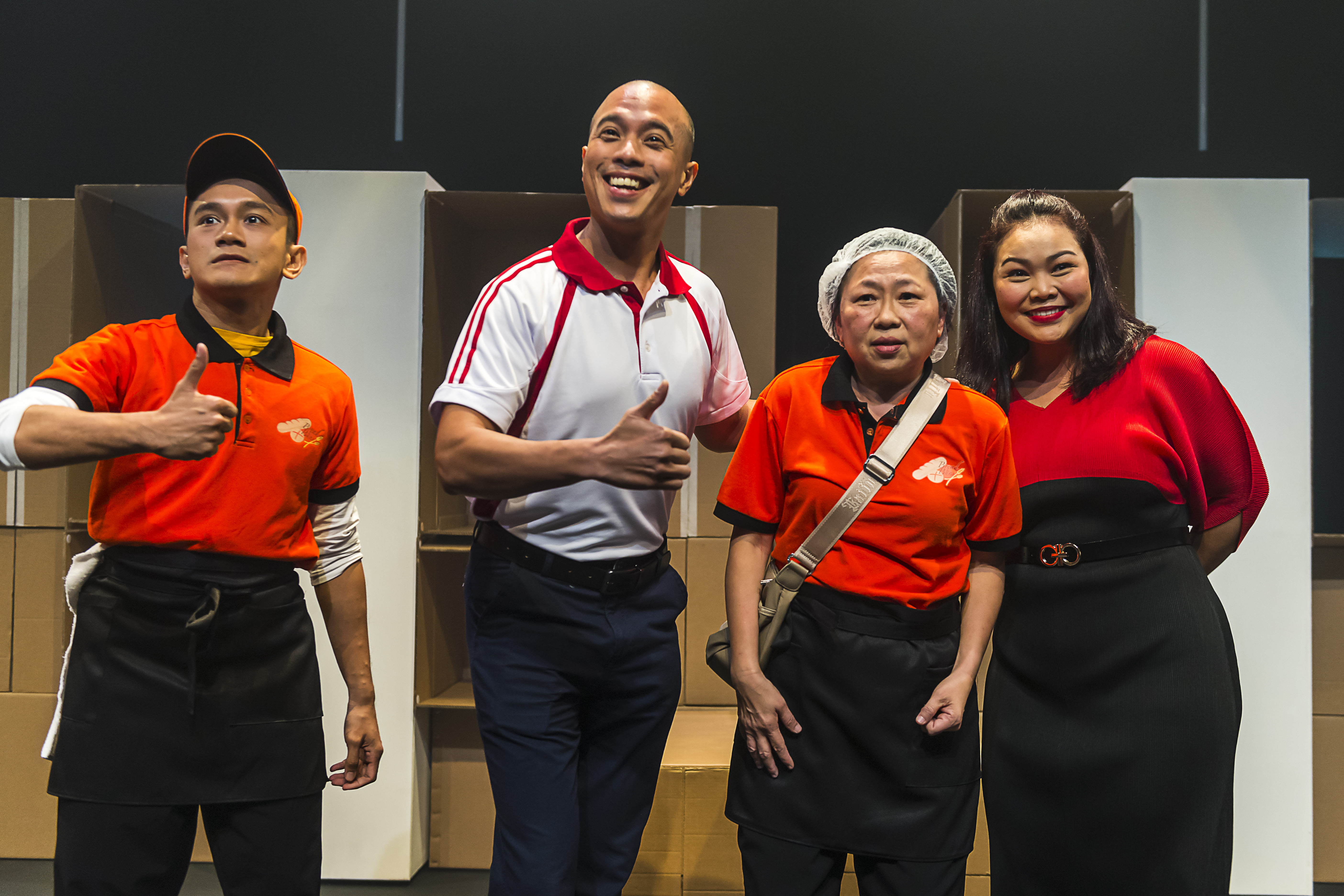 One of the biggest questions that Underclass chips away at is whether we as Singaporeans have lost our own sense of humanity, everything neatly packaged and presented, but meaningless inside. Each new character is introduced as a ‘case study’, reduced to their class, background and potential, a statistic as opposed to a living, breathing human. Designed by Vincent Lim, Lorong Lima is a land made of rows of empty cardboard boxes and white shelves, pristine yet clinical in appearance. It’s a smart, versatile set that allows these boxes to become windows when opened, or even transform into a polling station. Yet they still remain hollow and destructible inside. It’s no wonder then that Johari feels an intense desire to leave this place, a ghetto from which there is no future, and a land that is all face and no heart. 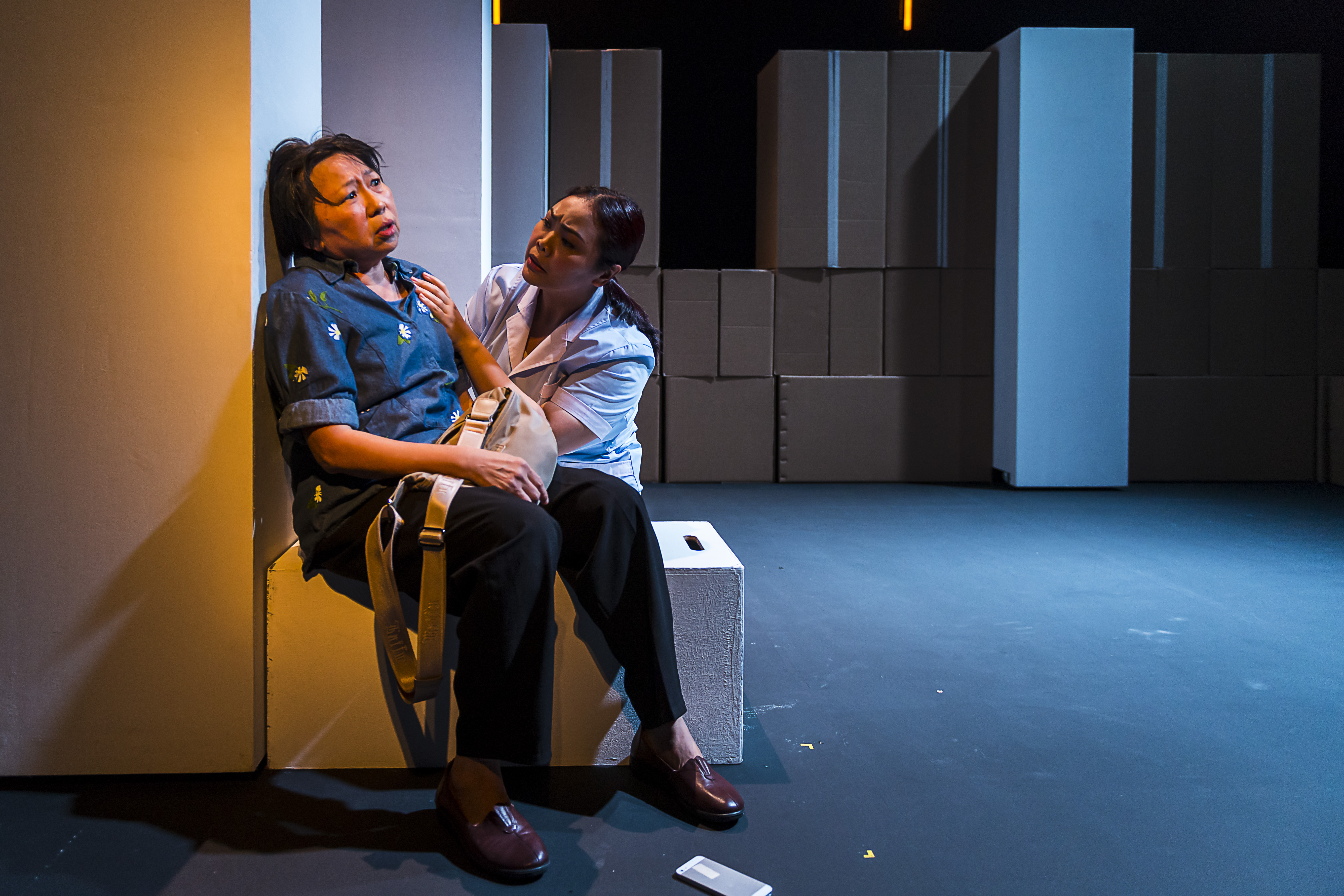 Perhaps then, the most crucial theatrical element of Underclass is how actors break character at various points during the play. Here, they engage in meta-commentary on the script, on how believable characters are or how, through its status as a work of fiction, allows for a hopeful ending. By taking us out of the central narrative, this allows for the mental space for audiences to take time to reflect on the play’s realism, and whether we ourselves, as agents in society, have the ability to exact our own change, or choose to ignore it. Although we are never forced to act or react, Underclass is able to cause a stir in our souls, as it acts essentially as a wake up call to the truth hidden in plain sight – that these people are all around us, and that as much as we choose to render them invisible, there is a call to show more acts of kindness and sympathy. 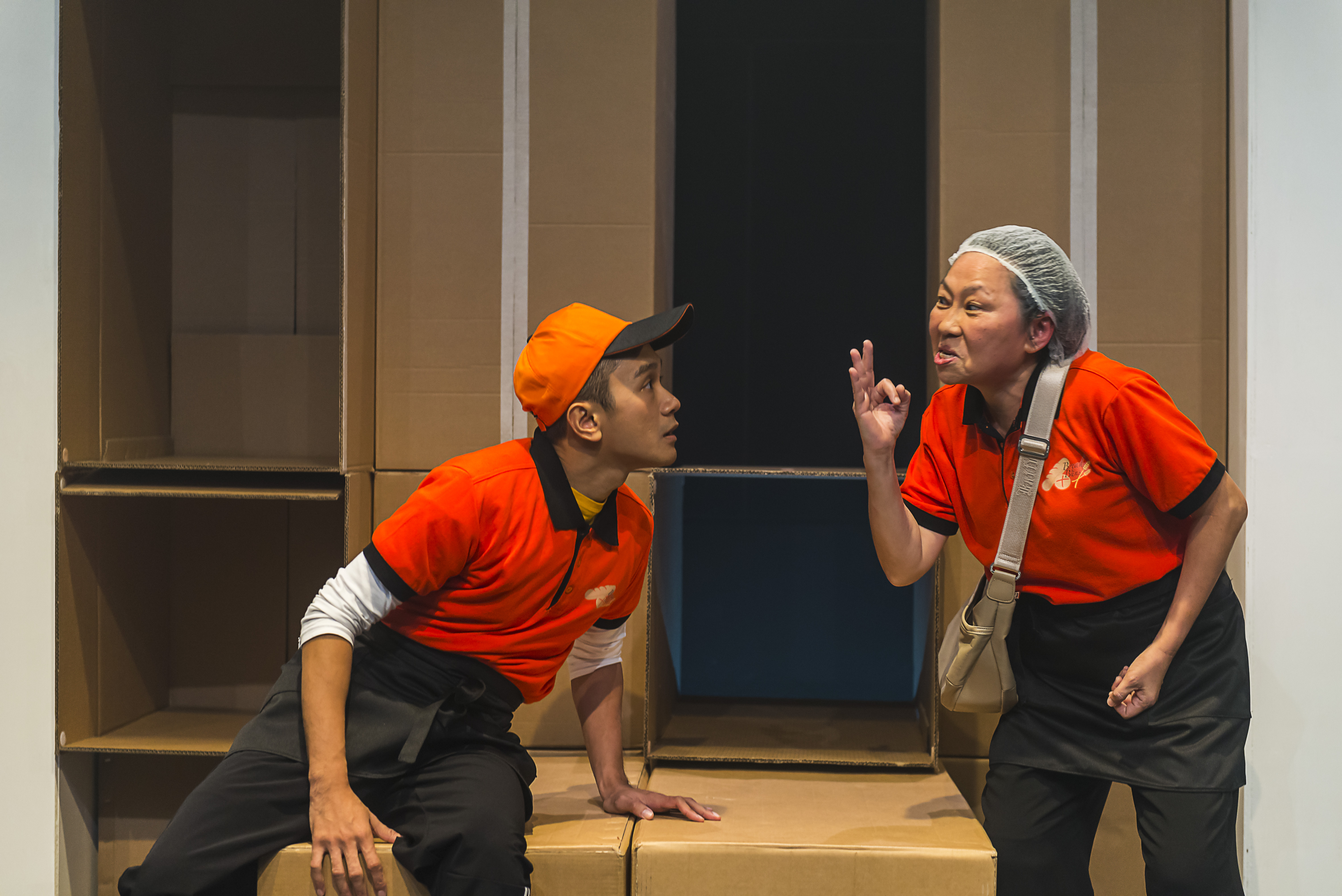 With a capable ensemble of actors, each one fully committing to their roles and bringing out every nuance required of their character (Siti Khalijah does especially well to move us with a controlled but affecting performance as a grieving mother), it is Goh Guat Kian’s performance that most of the play hinges on in playing her role sympathetically, yet never pitifully. There is a quiet strength to Guat Kian’s performance that makes her a force to reckon with; even with slurred speech, she remains a stubborn optimist and survivor at heart. It is this performance that ultimately leaves us with the internal, pained struggle as we watch Xinyi’s life enter a downward spiral. There are times she faces immense difficulty in tearing down the cardboard boxes around her, piling them onto a pushcart. As she struggles, we feel for her, yet are still left in a dilemma if we should get up and help or not, and once again reminds us of the beginning, as we are left with this similar inconvenient choice.

Ultimately, Underclass leaves us no easy solutions, and a heavy atmosphere once the house lights come on, nobody daring to clap in the uncertainty left behind by the performance. Underclass marks a strong return to form for The Necessary Stage and Drama Box, a collaboration that has produced urgent, politically charged theatre, hitting hard with angry, emotional performances. We’re left with a sense of guilt and plenty of material to ruminate upon as we shuffle out of the theatre quietly, wondering if there is truth to the closing claim that “in reality, nothing changes.”

Underclass plays at the Necessary Stage Black Box from 16th May – 3rd June. Tickets are SOLD OUT.

3 comments on “Review: Underclass《贱民》by The Necessary Stage and Drama Box”