There’s no feeling that quite replicates hearing the opening verse of ‘The Circle of Life’ from Disney’s The Lion King, evoking a sharp sense of nostalgia that immediately endears any longtime fan to the production, alongside undeniably epic visuals as a giant paper sun rises from the stage, letting everyone know exactly how much of a spectacle the theatre is about to watch, eyes wide and gasps of ‘wow’ emanating from those witnessing it for the very first time. 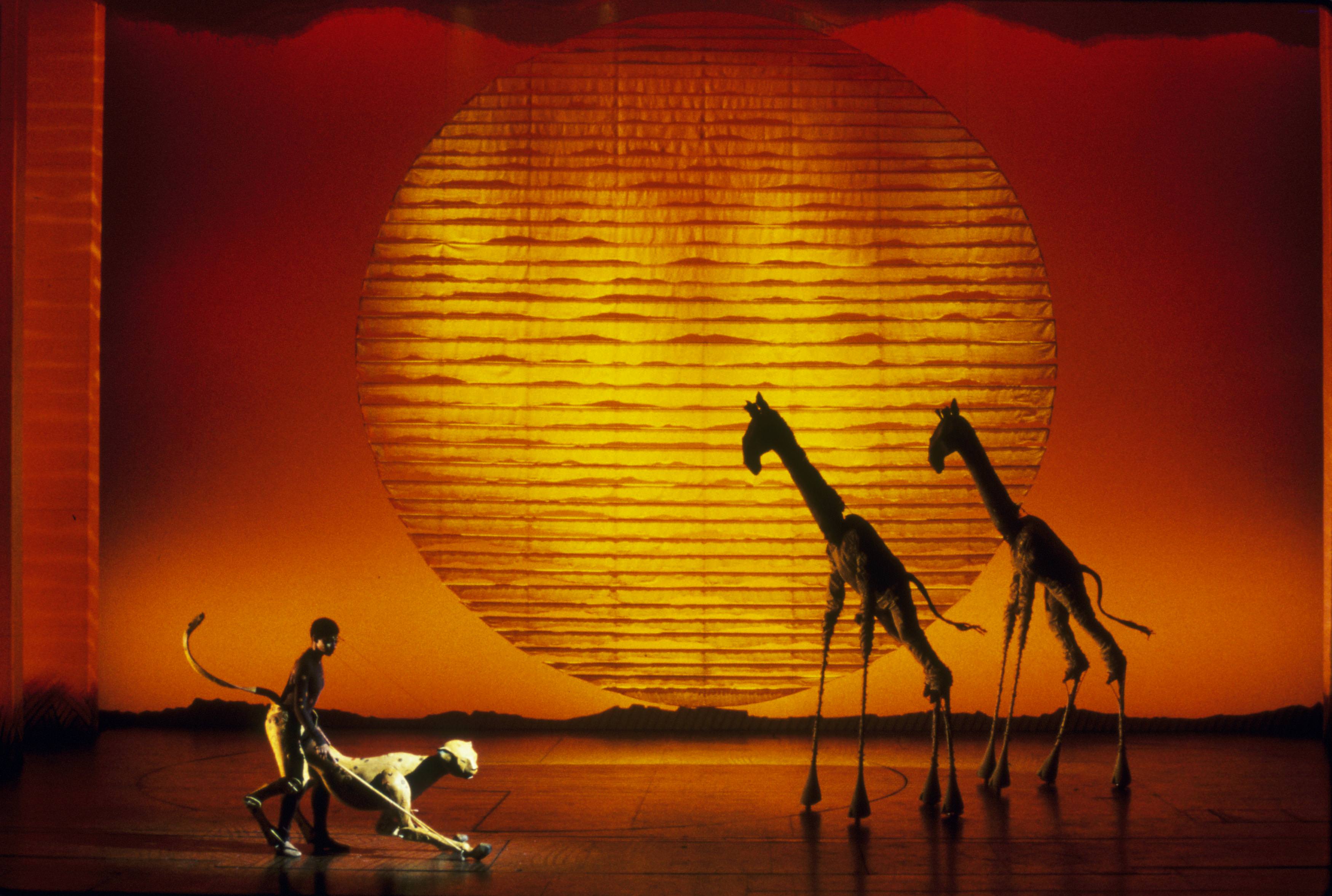 Returning to Singapore after it made its Southeast Asian debut here 7 years ago, the ‘World’s Number One Musical’ remains a work of art and sheer theatrical genius. From the mind of director Julie Taymor (who became the first female director in Broadway history to win the Tony Award for Best Director for her work on The Lion King), The Lion King is ambitious in scale and vision, and has become a modern classic for its timeless story of growing up and the responsibility of kingship. Even at 20 years old, the musical’s expertly crafted songs (by Elton John, Lebo M, Mark Mancina and Tim Rice) remain fresh each time one hears them, a smooth marriage of pop and the rhythms of Africa. 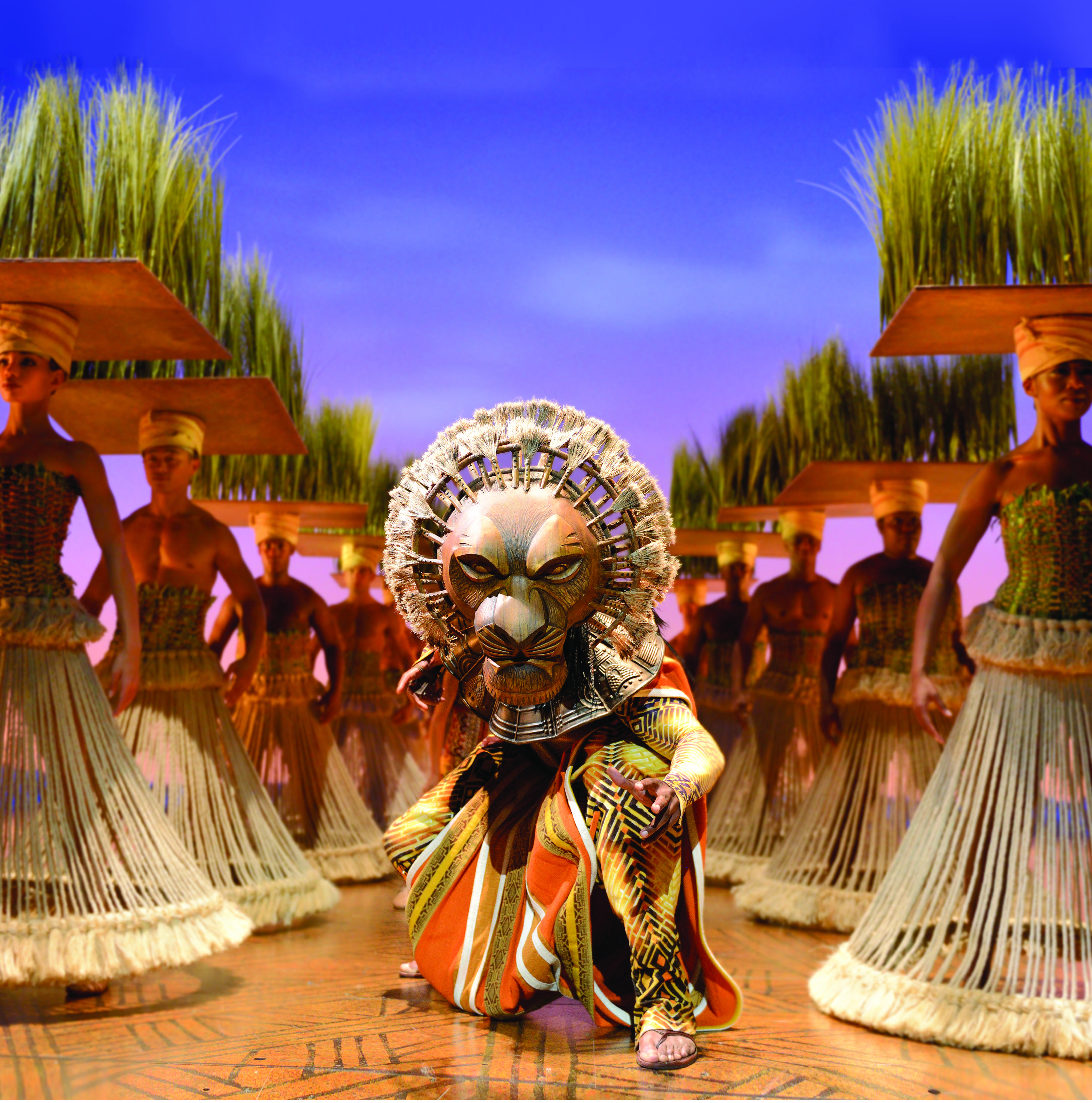 The Lion King’s strongest suit has always been its unique staging – what seemed like an impossible task to adapt an animated film about animals engaged in political turmoil is elevated to theatrical spectacle as Richard Hudson’s scenic design perfectly captures aspects of both the African savannah and the original film, actors don tribal animal masks and wield stylized puppetry inspired by both Balinese and Japanese Bunraku tradition, almost like a large scale, sacred ritual as we witness the sheer variety of ‘animals’ come together and interact. There is so much detail that goes into each costume – ruler Mufasa’s mask is a symmetrical, perfect circle alluding to the Circle of Life and his poise upright and strong, while in contrast, the villainous Scar skulks around with a walking stick, appearing skeletal, conniving and snide with his bone-like attire and sharp, elongated mask. But underneath these masks and animalism, what truly works is the surprising humanity and relatability lying beneath, best exemplified in a powerful moment when Mufasa removes his mask to speak to young Simba man to man and not ruler to subject. 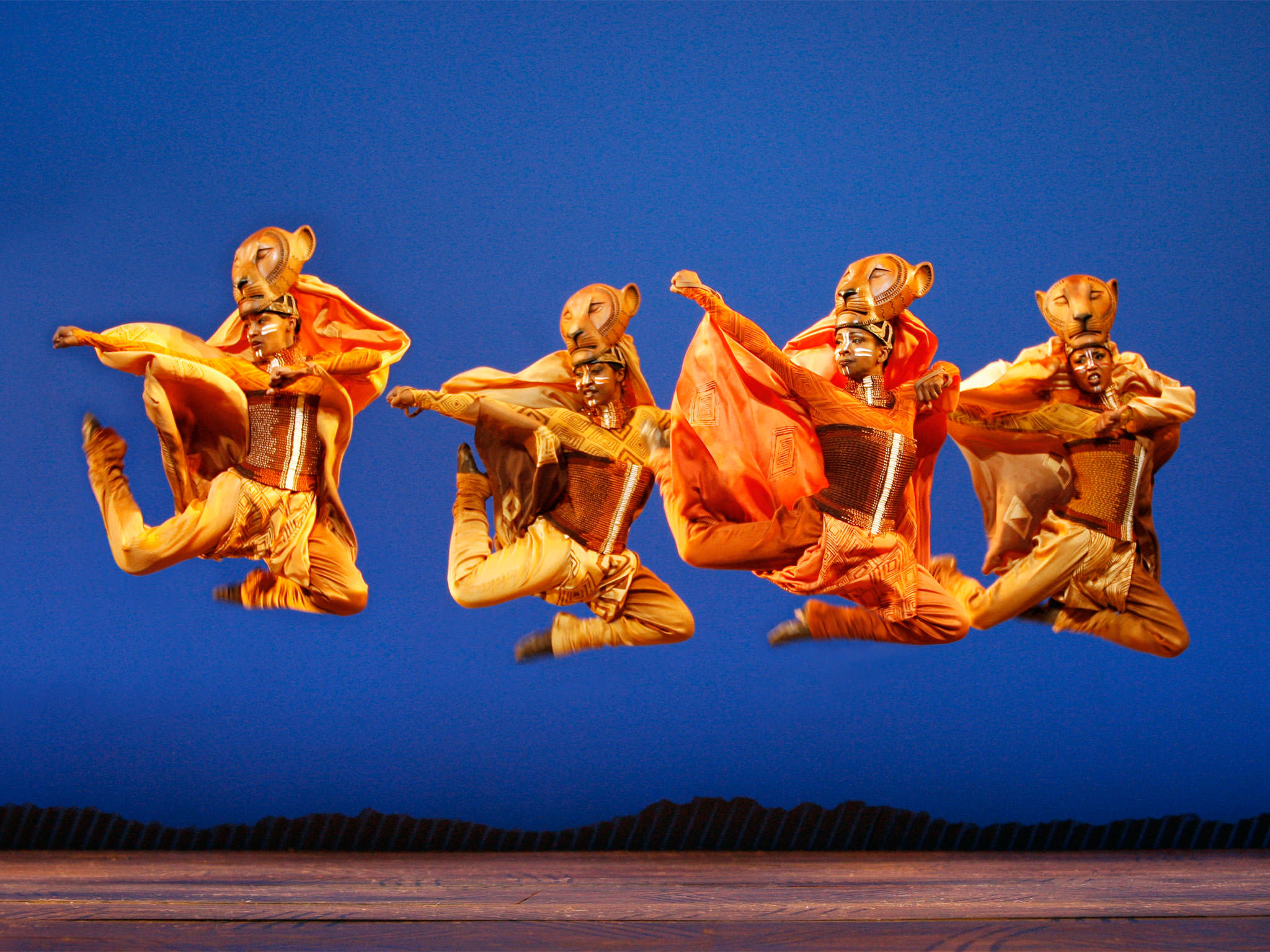 It is The Lion King’s big numbers that hit home every time, from opening ‘The Circle of Life’, to Act II opening ‘One by One’ and ‘He Lives In You’. With the company making surprise appearances from unexpected corners of the theatre, and the high energy, physically demanding mass choreography demonstrated, adopting stylised interpretations of the natural world’s movements, there is never a dull moment. Even amidst the smaller numbers restricted to action taking place only onstage, one is left arrested by the intricacies and coordination required to pull off each act, with a personal highlight being the grace displayed by the pack of lionesses during ‘The Lioness Hunt’, making even the act of hunting appear elegant as they leapt and danced in unison. One also appreciated the wildebeest stampede scene, which used the entire stage to create an illusion of depth with clever layering, maskwork and puppetry to practically evoke an almost literal quake across the entire theatre. 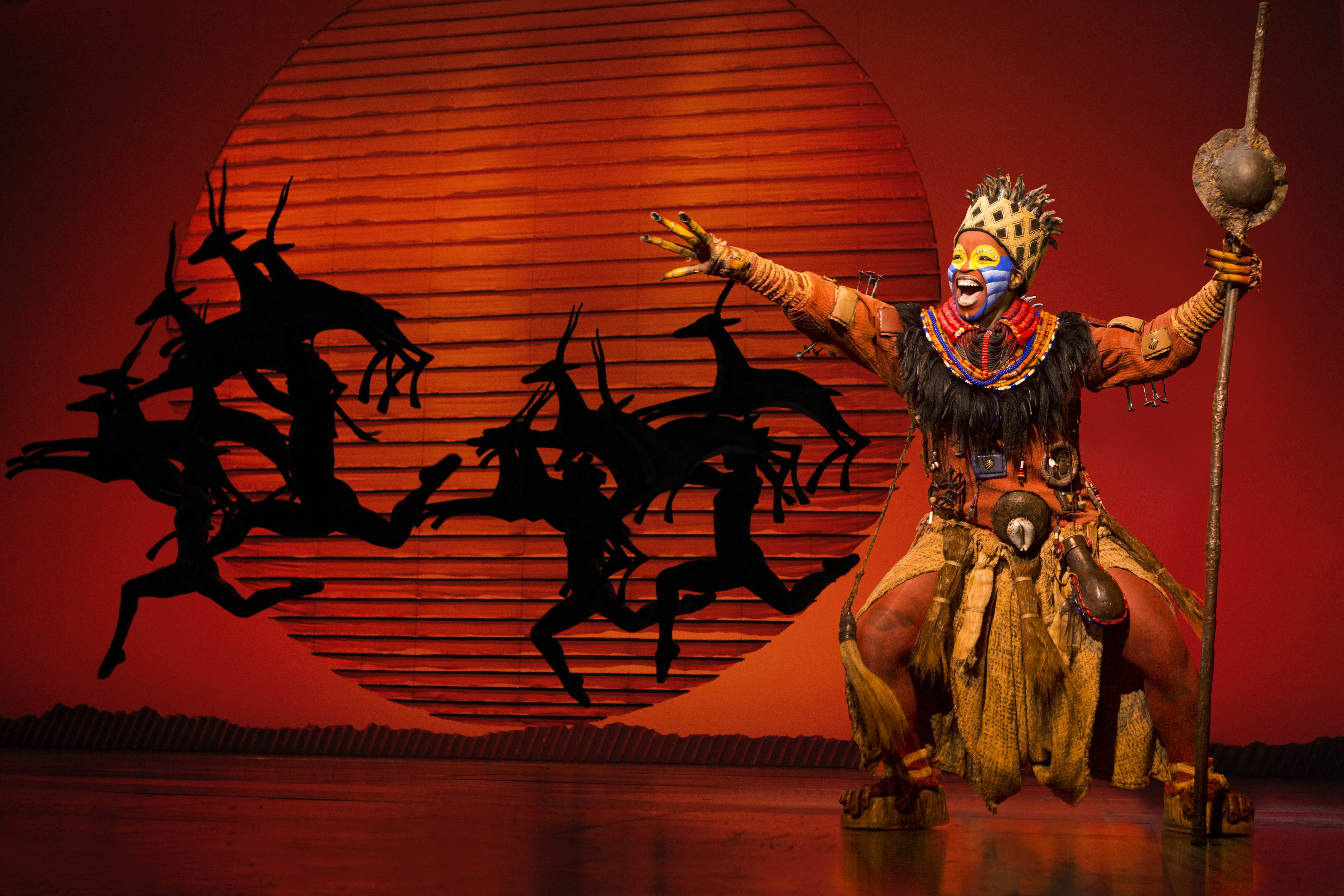 Credit of course, also goes to the well-cast team of actors making up the company. Every single named character is given their chance to shine over the course of the production, from comic relief duo Timon and Pumbaa (Jamie McGregor and Pierre van Heerden) to sarcastic advisor Zazu (André Jewson) to erratic, rapidfire spirit guide Rafiki (Ntsepa Pitjeng). Perhaps one of the most welcome surprises were the child cast of Julien Joshua M. Dolor as Young Simba and Uma Naomi Martin as Young Nala, who impressed with the confidence they displayed onstage and their vocal strength to carry their roles in the first half of the show. We particularly enjoyed how in “Hakuna Matata”, Simba’s growth from child to adult was seamlessly achieved, as Jonathan Andrew Hume swang onstage on a vine seconds after Dolor exited, effortlessly introducing him to the audience. 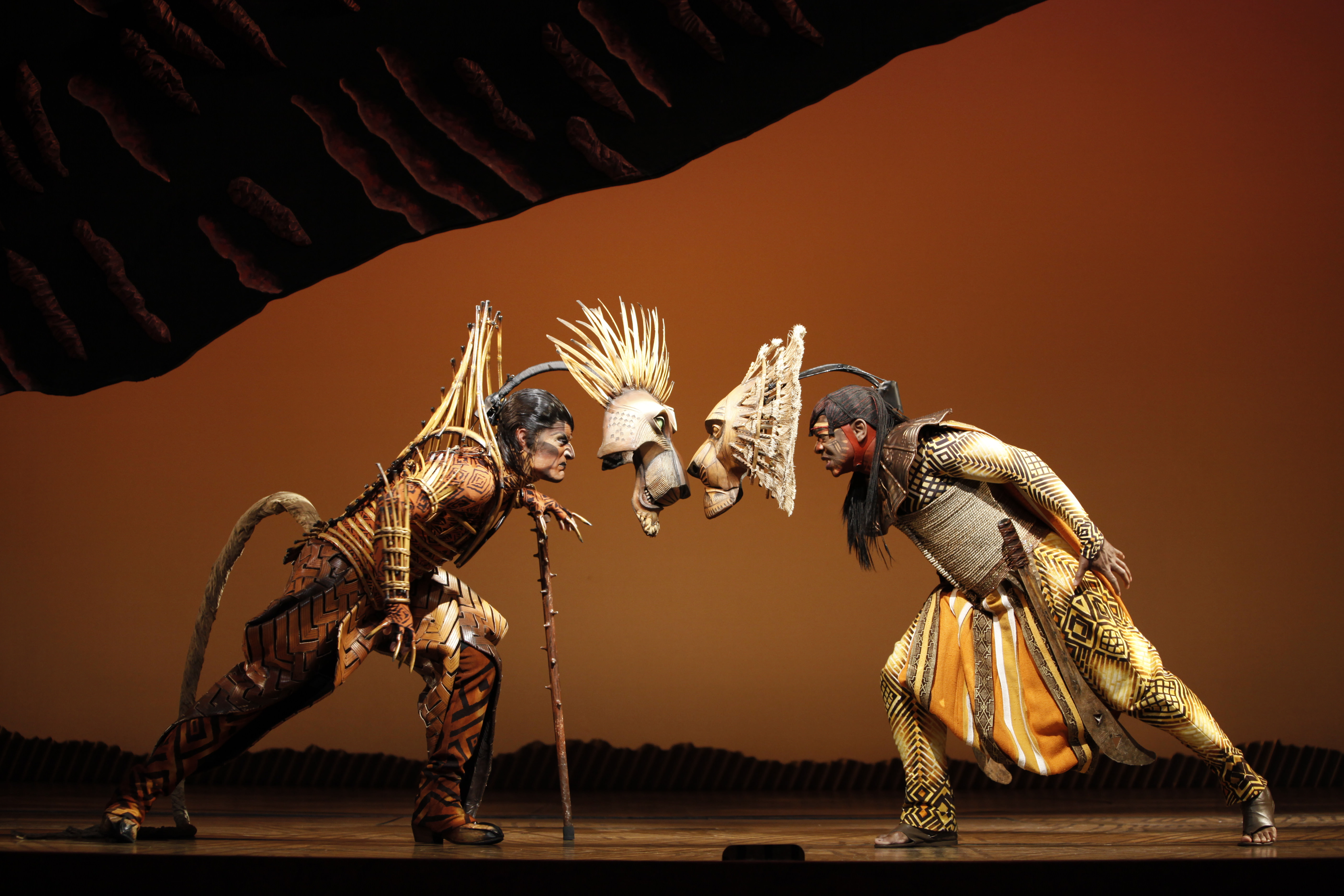 As brothers at odds, Antony Lawrence as Scar fares as a worthy rival to Emkay Khanyile’s Mufasa. Lawrence achieves a delicate balance between true evil and flamboyant villainy in his drawled out tones, while Khanyile is able to bring out Mufasa’s inherent majesty with his physicality and firm performance of his lines. Finally, leads Jonathan Andrew Hume and Noxolo Dlamini as Simba and Nala respectively share strong onstage chemistry each time they encounter each other, launching energetically into the air while playfighting, and able to balance this with a tenderness in their performance of ‘Can You Feel The Love Tonight?’ Hume, in particular, does especially well in the emotional solo number “Endless Night”, and through his performance, one is taken on a journey as we watch him mature from carefree cub to king of the Pride Lands, his physicality morphing from that of a restless youth to one more similar to Mufasa’s controlled, confident demeanour. 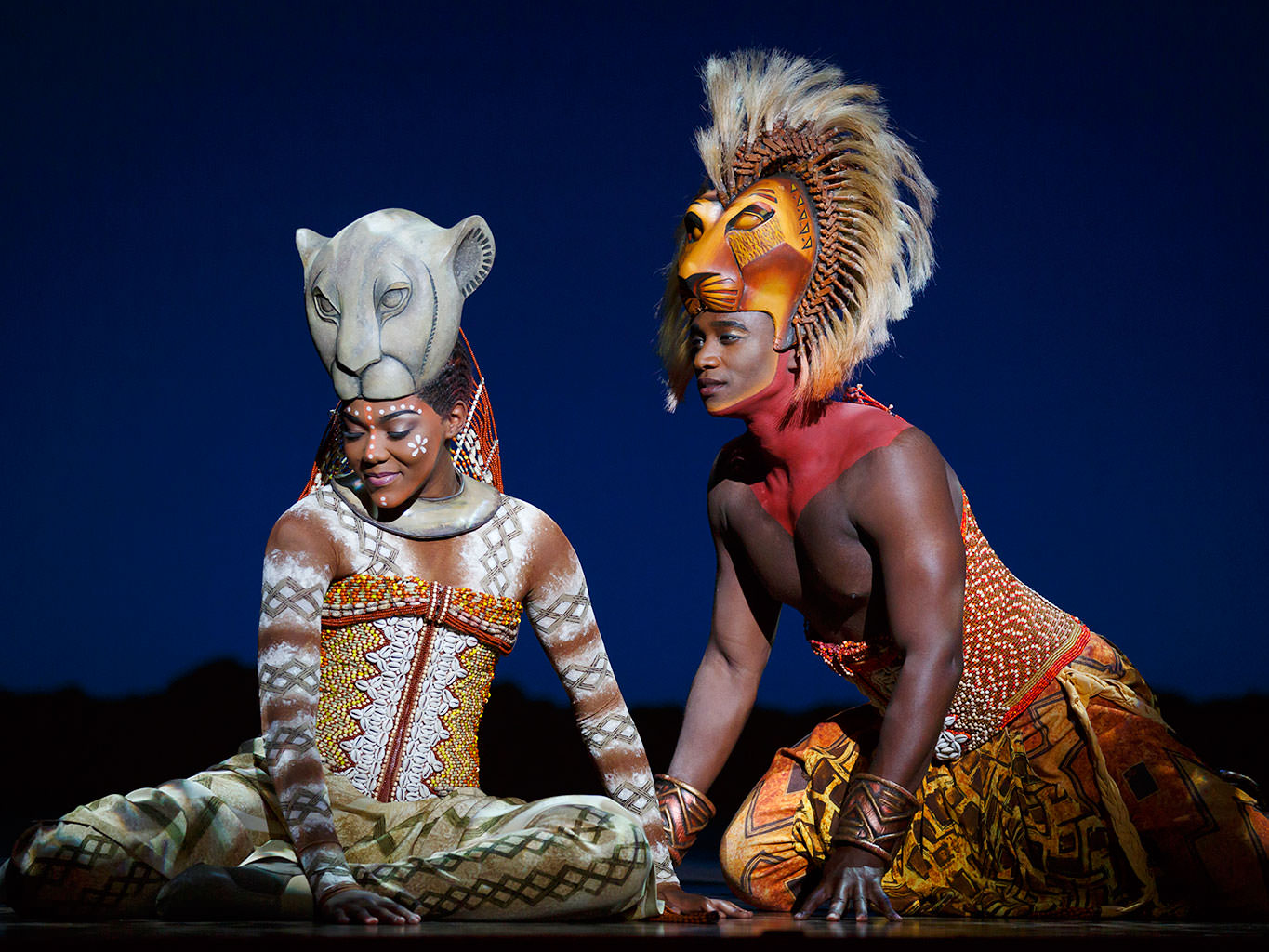 For the sheer spectacle of its visuals alone, The Lion King already makes a strong case for being a must watch musical at least once in your life. Couple that with its all-encompassing storyline that will resonate with anyone from child to parent, alongside its unforgettable, pulsating soundtrack, and it’s a show that, as we witnessed tonight, brings joy and wonder to all who manage to watch it. There’s nothing quite on the same level as how big, how beautiful and how timeless The Lion King is, and with its three month stint here at Marina Bay Sands, has plenty of time to charm returning fans and enchant an entire generation of new viewers with its unique brand of theatrical magic.

All photos copyright of Disney

Want in on the Circle of Life? Hakuna Matata (it means no worries), we’re giving away two pairs of tickets to catch The Lion King! All you have to do is: