Over the weekend, Centre 42 played host to the third edition of Late-Night Texting, the centre’s now annual series of free programmes held as part of the Singapore Night Festival to introduce members of the public to text-based performances.

Curious passers-by would have been immediately drawn to GroundZ-0’s Legends of the Islands, a talk-show style performance held in Centre 42’s courtyard. Performed by Hang Qian Chou, Lina Yu, and Suhaili Safari, the production was a loud, boisterous affair marked by gongs and slapstick humour as the three of them told origin stories of Singapore’s offshore islands. Presenting three ‘versions’ of each legend per twenty minute performance, audiences were then asked to vote on which version they believed was the most true of all, and had a good magnetic pull for audiences of all ages as they sat around and immersed themselves in the performance.

As with last year, Malay playwriting circle Main Tulis Group returned with a set of seven new nine-minute plays in ETA: 9MIN. Divided across two sessions, these two-hander plays covered a variety of hard-hitting issues, ranging from death to divorce, drugs to depression. Particularly affecting were Nessa Anwar’s Childhood Sweetheart, which told of former childhood lovers reuniting when one has been imprisoned, as well as Raimi Safari’s Landing, which portrayed two friends as they delay a suicide pact they agreed on.

On a less dark note, Zulfadli Rashid’s Jodoh was an ordinary, yet effectively natural conversation between a father and son about life and love, while Ahmad Musta’ain Bin Khamis’ The Clean Up brought the series of plays to a fantastic close as a wife (performed to commanding perfection by Siti Zuraida) is questioned how far she is willing to go to support her husband’s political win. Each of these plays offered plenty of fresh insight along with strong emotional resonance, and proves that the Main Tulis Group remains one of the most exciting playwriting circles in Singapore, one whose members we wish could be given more support and brought into the spotlight more often with longer, full-length works more often in the theatre calendar.

The Second Breakfast Company (2BCo) presented Lovebites, performing short extracts from Singaporean plays both past and contemporary. Thematically exploring the love between friends, within the family, and between lovers across six pairs of excerpts, this was a rare chance to see older plays such as Lim Chor Pee’s Mimi Fan (performed to agonisingly camp soap opera levels by Kenneth Chia and and Nur Hasyimah bte Hassan) and Haresh Sharma’s This Chord (And Others) brought to life, the latter of which was an unexpectedly brilliant appearance from 2BCo co-artistic director Mark Benedict Cheong who should absolutely appear onstage more often. 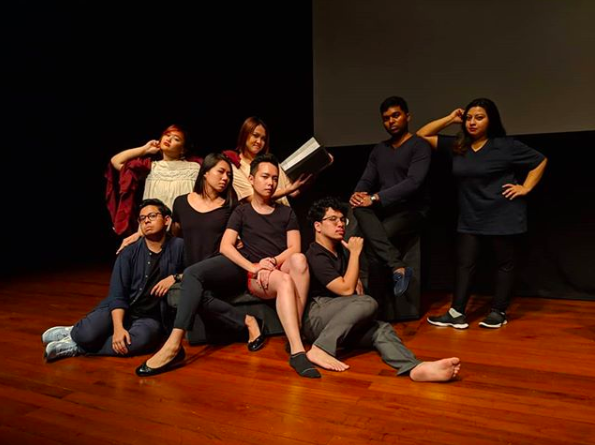 Contemporary plays covered included Faith Ng’s Normal and Joel Tan’s Mosaic, both of which featured actress Shannen Tan whose surprisingly layered performances captured the rough-hewn exterior of her ‘ah lian’ characters, but also possessed a hint of vulnerability and softness lying underneath. 2BCo has had a particularly busy year of programmes, and will be returning with full length productions later at the upcoming Asian Youth Theatre Festival 2018 and with their second mainstage production The Old Woman And the Ox, to be staged at the Gateway Theatre.

Besides the Main Tulis Group, Dark Matter Theatrics also presented dramatic readings of 12 new short English plays written by local playwrights surrounding the theme of  “short-sighted”. Performed by Danielle Cutiongco, Chew Wei Shan, Jasmine Xie, Salif Hardie, and Sharda Harrison, there were some strong new pieces seen in these sets of plays, and one wonders if there is potential to either expand on them to full length, or perform them as full productions at some point in future.

We caught the fourth set of plays, and enjoyed Christopher Fok’s humorous but moving portrayal of a ‘Kitchen God’ by Jasmine Xie in The Blesser of Utensils, as well as Kaylene Tan’s devastatingly familiar look at an elderly couple’s falling out in Night and Day, crushingly played by Sharda Harrison and Salif Hardie. As Dark Matter Theatrics goes independent next year, we can’t wait to see how they grow as a company and continue to help provide a platform for local playwrights.

A rousing success to the third edition of Late-Night Texting, Centre 42 can only continue to grow in the years to come with more strong programming, staging new works, celebrating old ones, and facilitating the local theatre scene. As a completely self-funded programme, it’s quite amazing what the centre has achieved over two nights, and one hopes that they’ll continue to see more audiences, more support, and a more dynamic programme come 2019 and beyond, and certainly, has now established itself as one of the key ground-up events to look forward to in the annual theatre calendar.

Late-Night Texting 2018 took place on 24th and 25th August 2018 at Centre 42. Admission is free. For more information on the programmes and lineup, visit their website here You can support Centre 42 with a donation at their Giving.sg page here