In a world with turbulent politics, tragedy waiting on every corner and general gloom, it can be difficult to remember how to take a step back and look at the lighter side of life. Perhaps one of the best solutions then, is simply to indulge in a little song.

Uniting singers Teng Xiang Ting (Soprano), Michelle Tan (Mezzo), Alvin Tan (Baritone), Leslie Tay (Tenor) and pianist Pauline Lee, Life Is Ha-Ha-Happiness is a recital that aims to bring a smile to audience members’ faces with some of the cheerier songs from operatic and musical history. For one evening, the Esplanade Recital Studio was transformed into a casual ‘cafe’ setting, as each of the four singers presented a medley of songs that showcased their vocal range and styles while also having the time of their lives, playing dress up with hats and accessories while playfully reacting to each other’s songs. 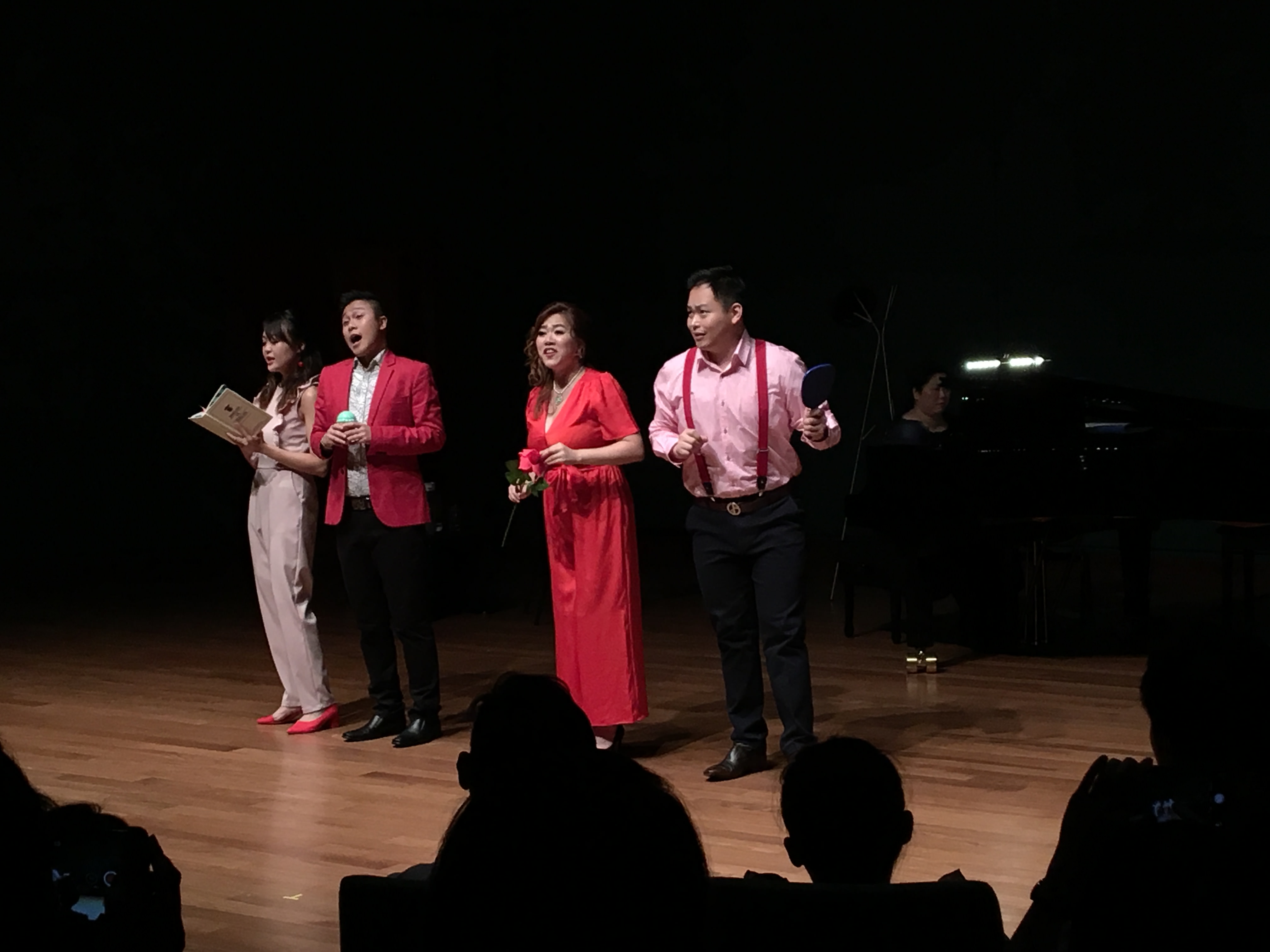 Setting the casual tone of the performance with a group vocal warm-up, showing audiences the pre-show rituals a singer goes through, Life Is Ha-Ha-Happiness feels like a good introduction to the world of classical singing. We appreciated how each performer took the time to introduce and explain the context of the songs, which made the performance easy to understand and follow. It wasn’t long before audience members were comfortable and relaxed enough in the performance space to feel free to interact when asked, particularly as the performers themselves threw caution to the wind as they utilised props from rubber ducks to feather boas to further lighten the mood. 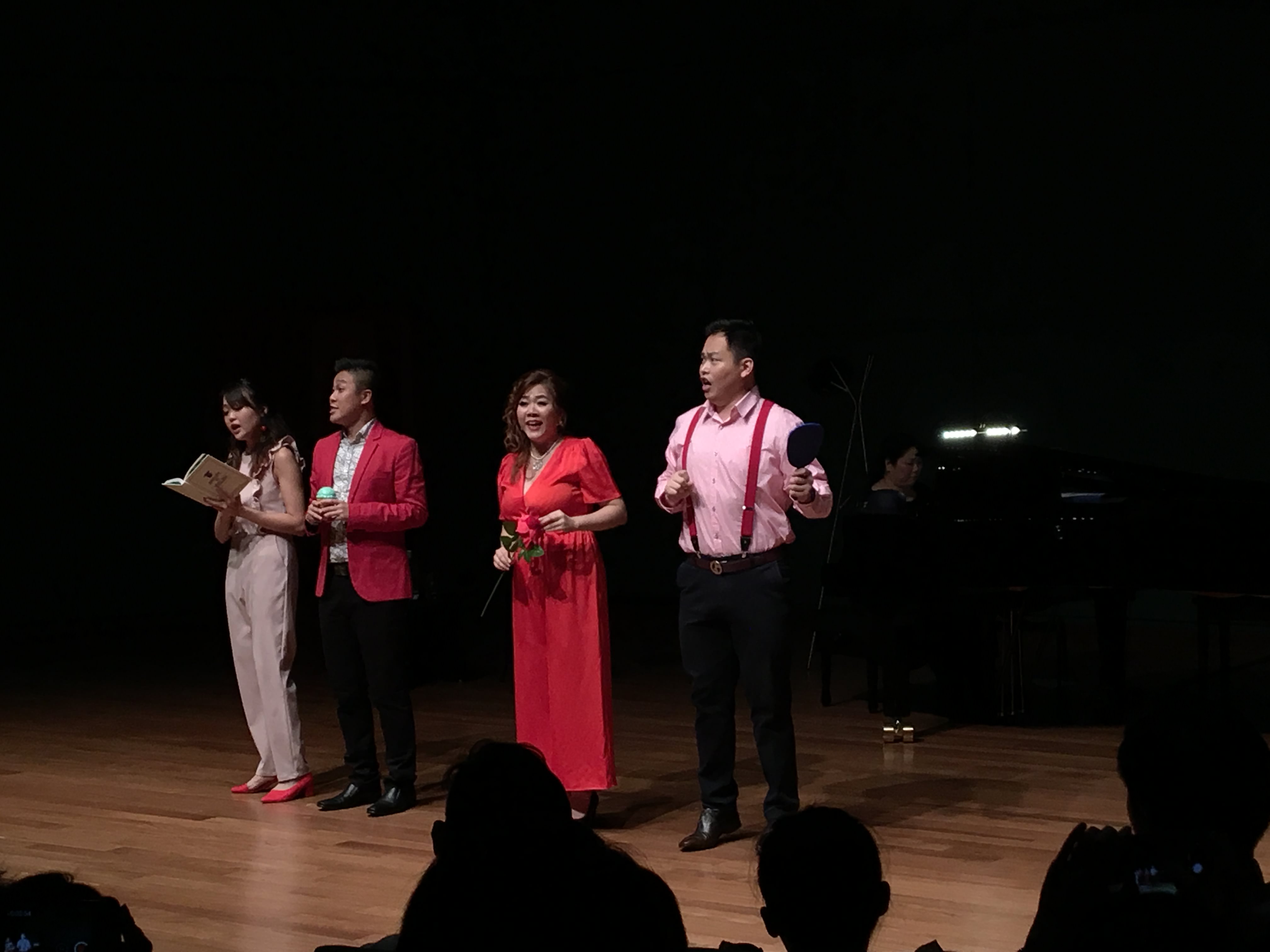 A set of four songs, comprising ‘Art is Calling For Me’, ‘Alto’s Lament’, ‘A Tenor All Singers Above’ and ‘I’m Glad I’m Not A Tenor’, gave each of the performers a perfect platform to showcase what their vocal profile was all about – in performing Herbert’s ‘Art is Calling For Me’, Teng Xiang Ting once again proves that she is a gift to Singapore’s music scene, allowing her to show off her soprano range and the emotion and precision she sings each lyric. Michelle Tan’s charming take on Goldrich and Heisler’s ‘Alto’s Lament’ drew plenty of laughs from the audience as she manipulated her voice to flatten the tones of songs that required a soprano’s touch, while Leslie Tay pushed his tenor’s voice to the edge with Gilbert and Sullivan’s ‘A Tenor All Singers Above’, serenading an audience volunteer, before Alvin Tan’s deep baritone voice closed off the first half, as it boomed with the requisite balance of confidence self-doubt in the expressive ‘I’m Glad I’m Not A Tenor’. 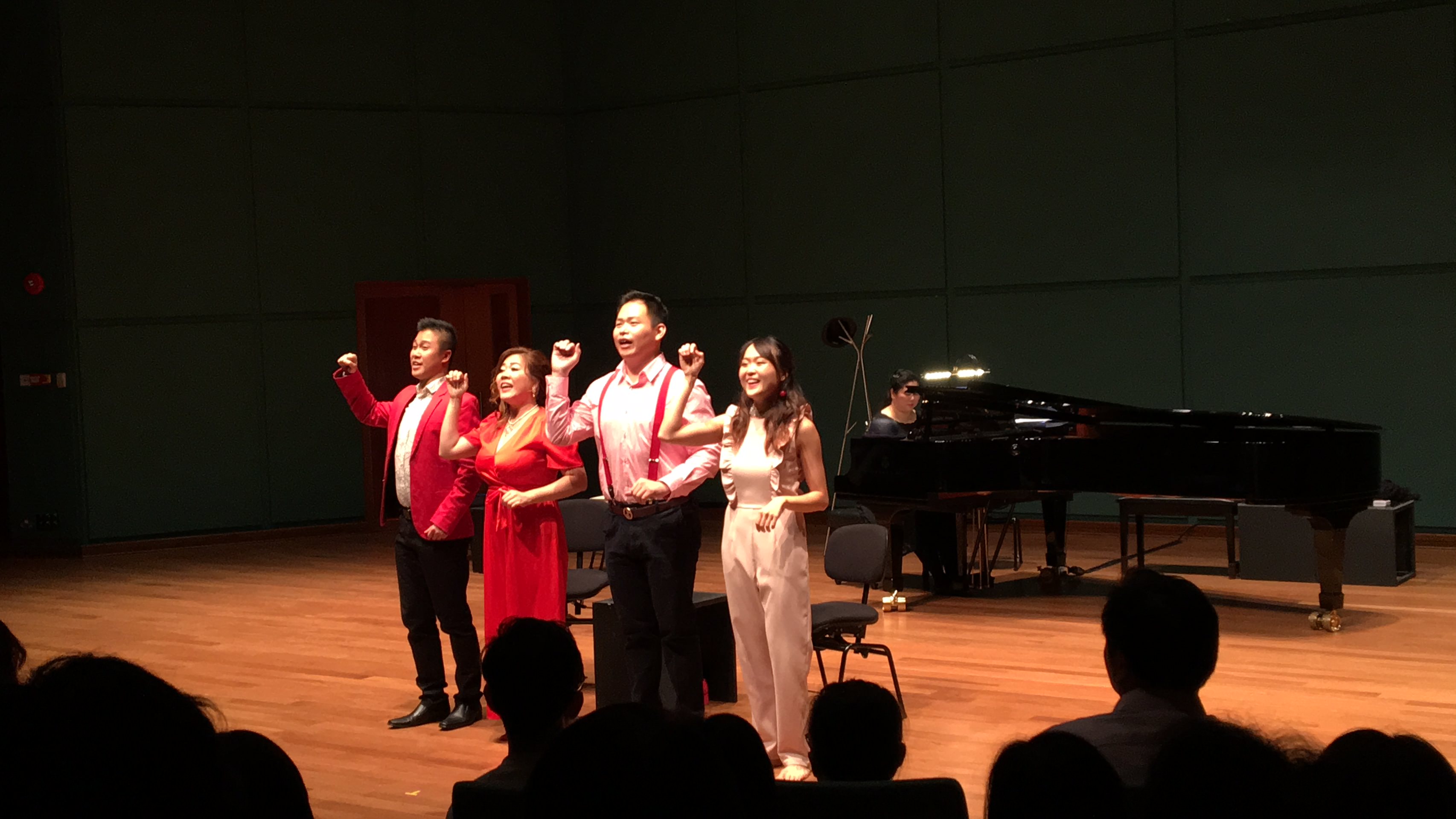 Following the intermission and a costume change, the performers looked noticeably fresher as they performed the world premiere of composer Lee Jin Jun’s ‘Headlines’. ‘Headlines’ comprised of three brand new numbers based off headlines from The Straits Times. Reminiscent of an advanced vocal exercise, the performers played with each headline as they battled it out vocally, drawing out and adding heavy emphasis on various words, with attempts to drown each other out with contradictory headlines on the introduction of casinos to MRT breakdowns, to Michelle Tan offering a sultry take on Josephine Teo’s unfortunate ‘sex in small spaces’ comment. Tongue-in-cheek and relatable due to the subject matter, ‘Headlines’ made for a strong post-intermission return, and one can practically see it being developed into an entire series of works in future.
From songs about fat turkeys to little ducks, Life Is Ha-Ha-Happiness also faced no shortage of animal-themed songs, making Copland’s ‘I Bought Me A Cat’ particularly appropriate as one to fully involve the audience in. With the chemistry and warmth built up over the course of the entire performance, audience members easily allowed themselves to let loose a little and have fun as they sang the animal noise parts of the simple but surprisingly effective ditty, leaving the entire studio giggling and cheerful as they segued into the appropriate final number of ‘Life is Absolute Perfection’, leaving us filled with joy. As the performers ended with an encore with Hinge and Bracket’s meow-tastic ‘Cat Duet’, the redemptive power of music becomes clear with how a song, when performed well, can be all one needs to brighten up anyone’s day and show them that life truly is made better with a little more laughter in our hearts,
Life is Ha-Ha-Happiness played at the Esplanade Recital Studio on 5th September 2018.

0 comments on “Review: Life is Ha-Ha-Happiness – A Voice and Piano Recital For All”