It’s no secret that in recent times, there’s been a steady rise in the number of private dining events in Singapore. While not heavily advertised and mostly spread via word of mouth, these are mostly small, intimate affairs, offering a cosy meal with friends and strangers as hosts throw open their doors and offer up hungry guests a meal to remember at nominal fees.

One such private dining event would be those organised by Relish.sg. Run by former television producer Rose Sivam (co-creator of arguably Mediacorp’s most successful sitcom Phua Chu Kang Pte. Ltd), Relish.sg sees Rose open up her humble home in an HDB unit in Serangoon North for homecooked meals lovingly prepared by her husband Chris. But there’s a twist here – often, instead of simply sitting and eating, Rose also gathers some of her friends and colleagues in the entertainment industry, promising a night of comedy, music and all around fun in addition to full bellies. 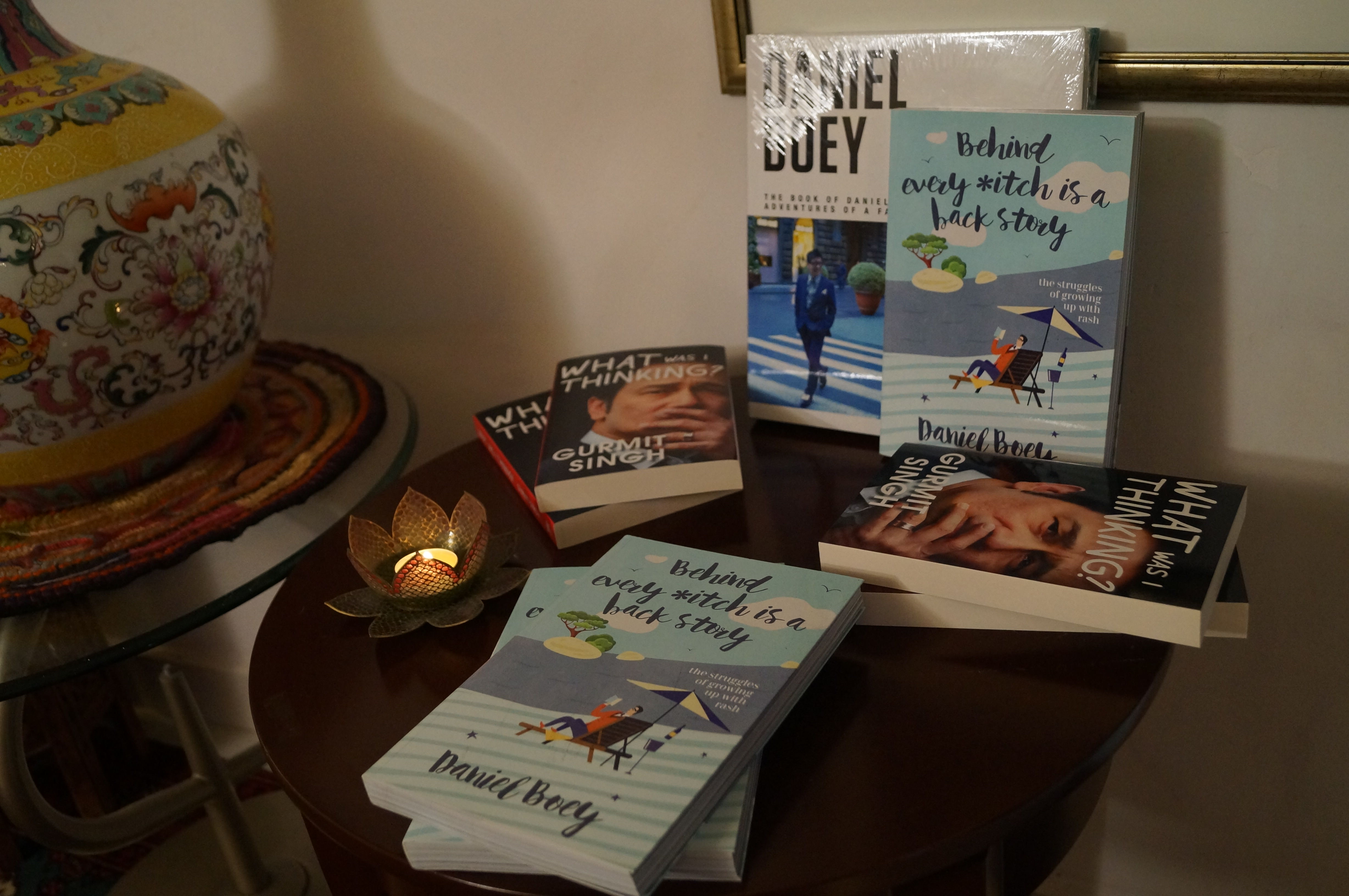 In the latest edition, Rose has inaugurated the very first edition of Relish Talks, supersizing the event with big time local celebrities, beginning with ‘Godfather of Fashion’ Daniel Boey and Phua Chu Kang himself – ‘Godfather of Laughs’ Gurmit Singh. 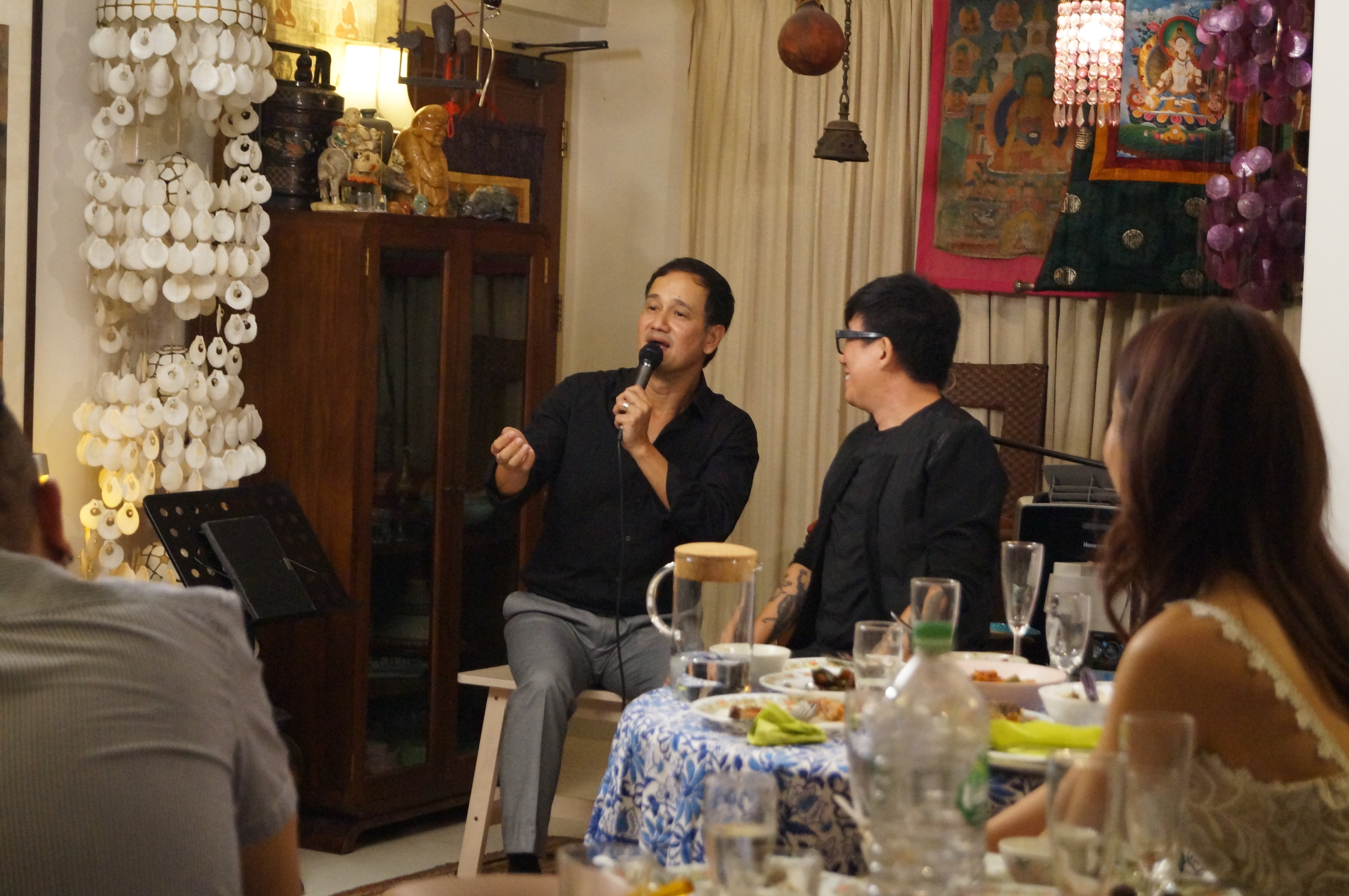 Together, the two brought an extra level of glitz to the night, as they sat in the hotseat and grilled each other on their lives, ranging from the light-hearted (“Tell us a time you told a lie as a child and got away with it.”, or when Daniel Boey acted in Michael Chiang’s Private Parts), to far more personal issues, with Gurmit reaching in to his own history when opening up about the emotional story behind the recent OCBC ad shot by Royston Tan, a chance for him to just be and tell his story instead of act.

Of course amidst the emotions, there were plenty of laughs to be had as well. Putting on his signature funnyman persona, Gurmit got volunteers from the audience to get up and perform Ben E King’s classic Stand by Me, as they swung about the room and danced, following Gurmit’s lead in an uproarious number to put a smile on everyone’s faces. 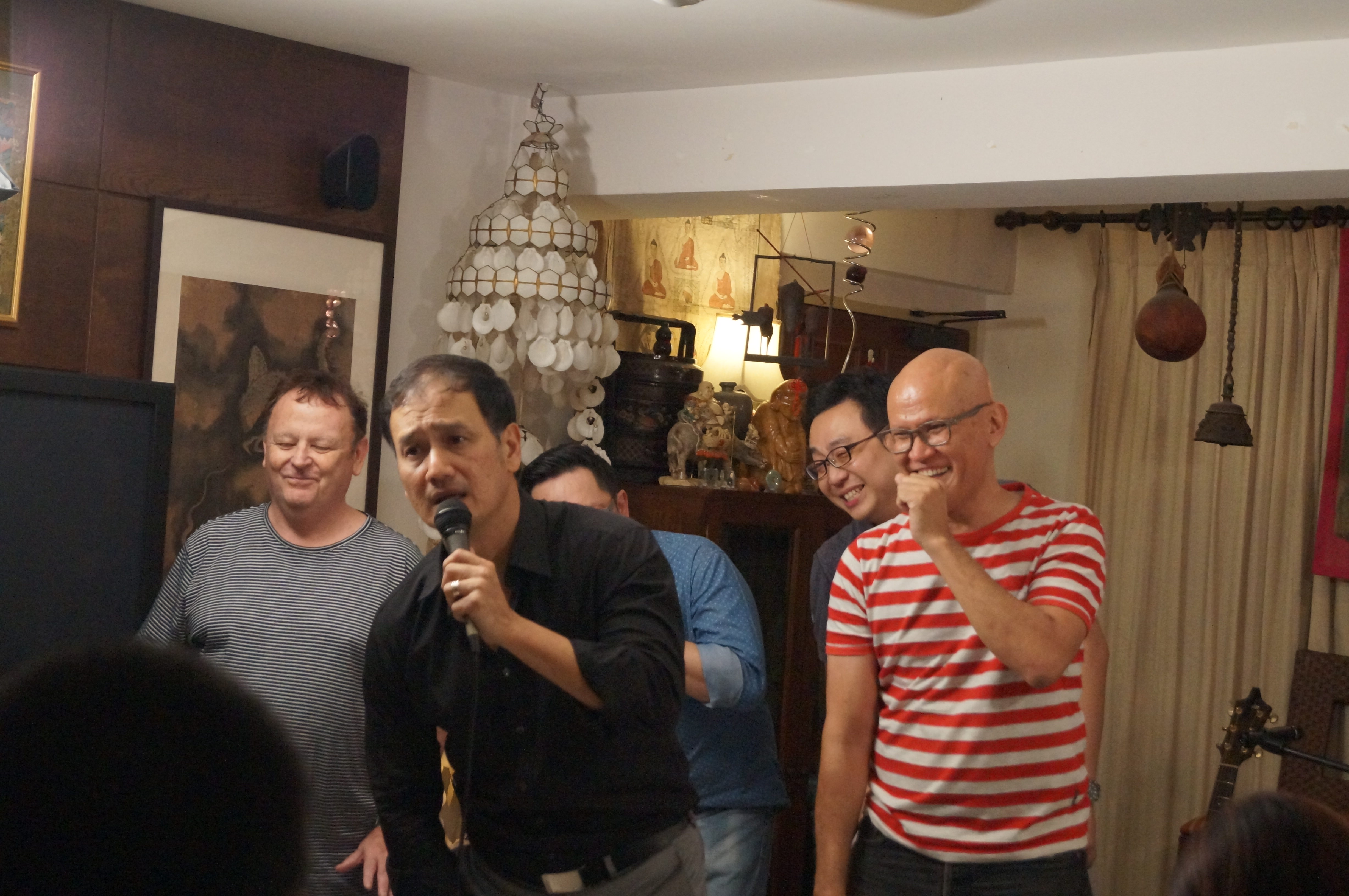 The night didn’t stop there, as musical duo and couple Marc X Hashy taking to the stage, performing two songs on the acoustic guitar. 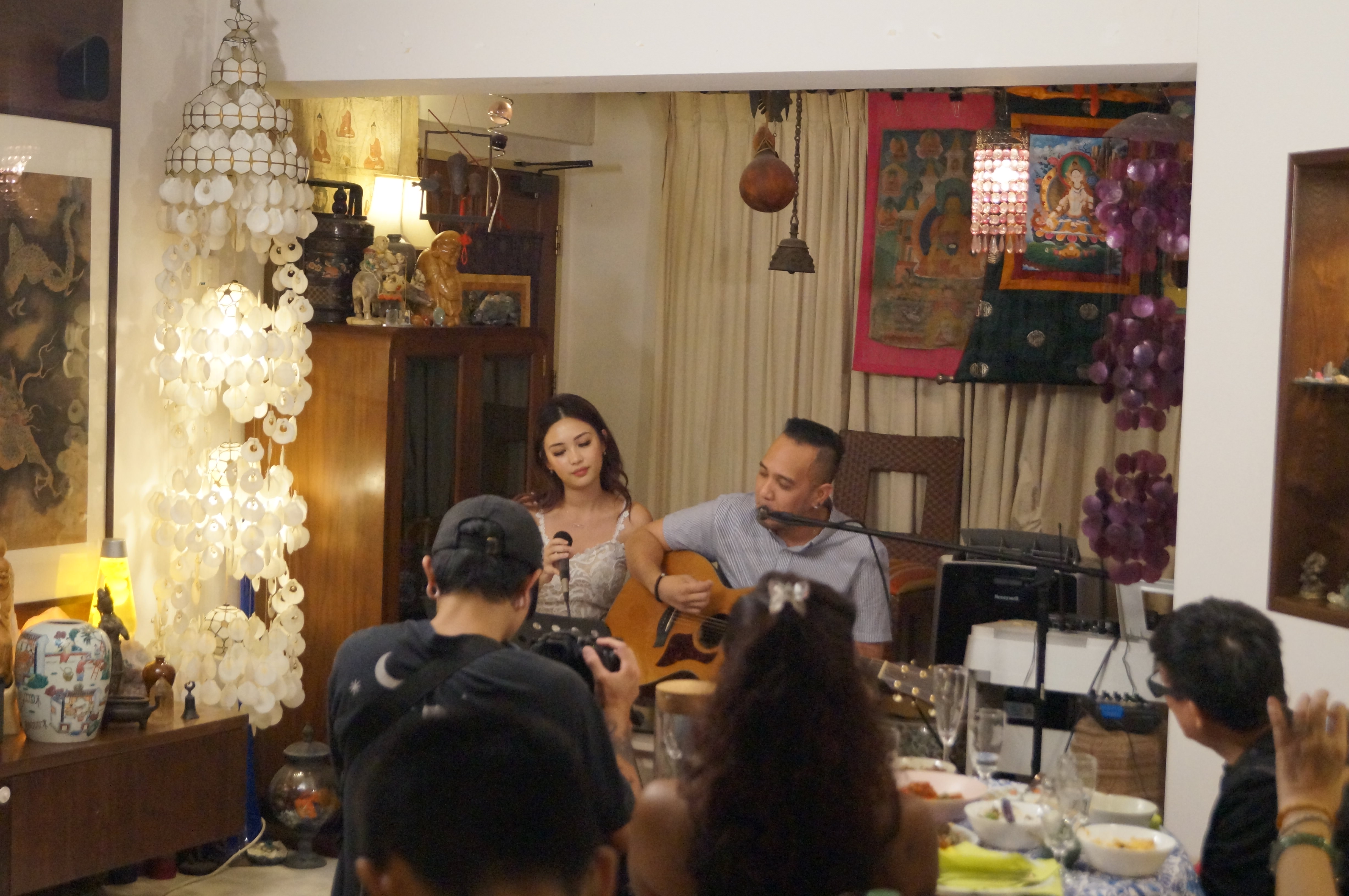 Taking the lead from Gurmit’s earlier emotional moment, Hashy, a New Paper New Face finalist, opened up about the spinal complications she was diagnosed with a few years prior, and the struggle the couple (who met on the set of Mediacorp reality show The Final One) went through because of it. While certainly upset by the diagnosis, Hashy did not let the incident faze her, instead walking with confidence at the auditions of the New Paper New Face, and never letting her condition, no matter how painful, to allow her to set aside her dreams. With Marc by her side and supporting her all the way, each and every dinner guest in the room was certainly moved, leaving us with hope in our hearts at the end of the night.

Of course, it wouldn’t be a dinner without food, and to match the level of lux brought about by the Godfathers, Rose and Chef Chris prepared an entire menu based off recipes from celebrities, ranging from Marilyn Monroe’s turkey to Leo Tolstoy’s Mac n Cheese, to of course, Gurmit Singh and Daniel Boey’s recipes – a Black Dhall and Black Pepper Chicken respectively, making for a satisfying nine course dinner that left our appetites satiated.

In addition, the warm environment created by Rose’s beautiful home (lined with plenty of fascinating souvenirs from all over) and more than friendly guests made for an easy, relaxing night, as strangers became acquaintances over the food, over varied conversation about lives and living, over glasses of wine and shared laughter. 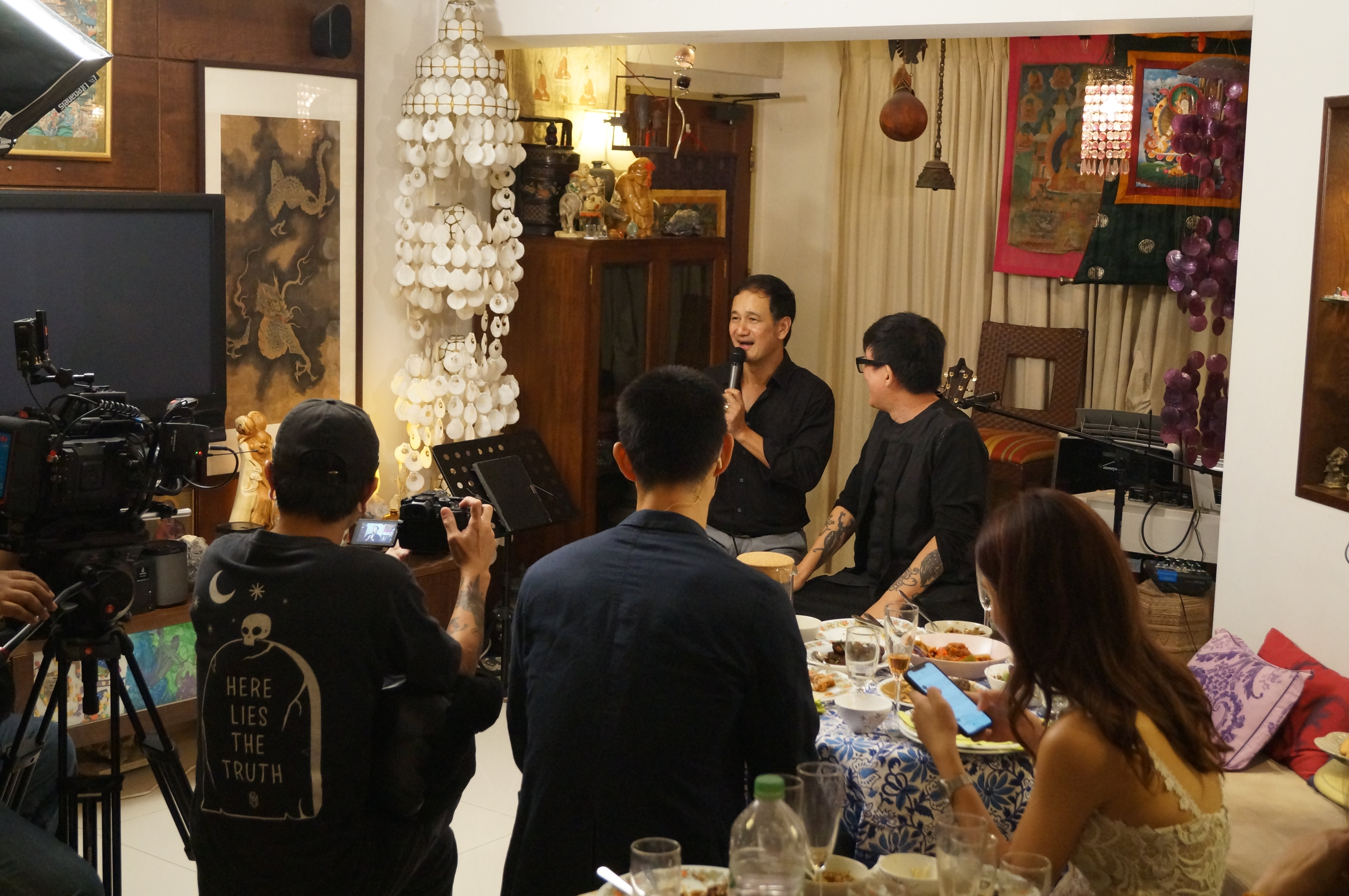 In all, Gents of Fashion, Life and Glitz & Haute Cuisine was certainly a gloriously enjoyable introduction to Relish.sg’s events, filling us with love and laughter over the authentic conversations and shared stories from both the guests and celebrities. One needs no further egging to say that this marked a successful new beginning to a new level of fun and class for Relish.sg’s Relish Talks, and we can’t wait to see how Rose continues to develop it, and which unexpected guest she’ll be inviting next.