Four works that showcase the vast talent and infinite imagination of NDT.

Each time the Nederlands Dans Theater (NDT) graces our shores ought to be considered a phenomenal event; the world renowned company is without a doubt one of the top contemporary dance theatres, with no shortage of slick, technically brilliant works that leave audiences slack-jawed and open-mouthed with awe at the dancers’ finesse and choreographers’ infinite imagination. For da:ns Festival 2018, NDT1 showcased a total of four works at the Esplanade Theatre – Shoot the Moon and Stop-Motion by house choreographers Sol León and Paul Lightfoot, and The Statement and Woke up Blind by associate choreographers Crystal Pite and Marco Goecke respectively. 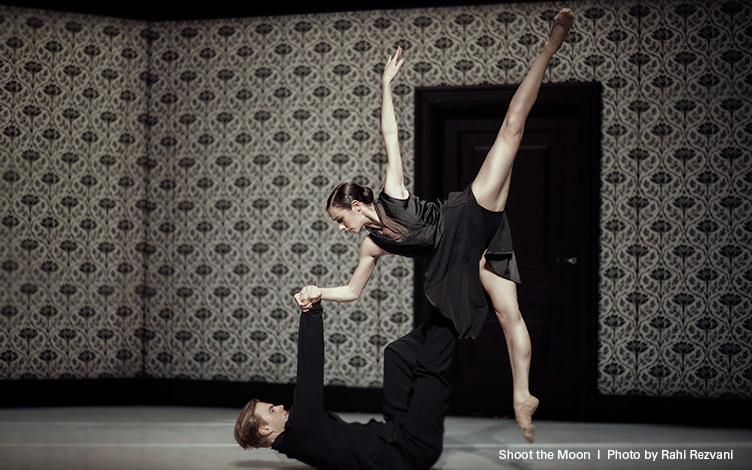 In Sol León & Paul Lightfoot’s Shoot the Moon, dancers Meng-Ke Wu, Chloé Albaret Olivier Coeffard, Roger Van der Poel and Jorge Nozal find themselves in a mysterious, gorgeous set of monochrome walls, transforming to reveal different couples at different stages of their lives. Each dancer dressed in black and white, the piece is set to an achingly beautiful Philip Glass score, exploring these characters’ inner psychodrama, with tenderness moving to violence as the piece escalates. One is reminded of the film noirs of old, with scenes such as one near a window making full use of the subtle but effective lighting to create a sense of onstage chiaroscuro and shadow play. Catching a glimpse of both sides of the window, there is a fear evoked from the sight of eyes darting back and forth upon them, as if we are being watched and spied on by voyeurs.

Towards the end of a performance, we watch a couple back walks ‘backwards’ towards a door, as if the darkness witnessed is far too much, shaking off the pain and anguish of the present to remember better days, where the dance becomes sensual, real and elegant, a memory long gone reminding us that while the present may be beautiful, one can never imagine how easily it can dissolve in the future. One sees the chronology of the dance as happening in reverse then, as we have borne witness to how different stages of one’s relationship is interpreted through emotional dance, ranging from loneliness to triumph, to love at first sight. Well portrayed by the dancers, the audience is perhaps even more astonished when it is revealed that the eyes on the window are in fact not a recorded video, but a live feed performed by Niels Mudde and Chuck Jones. With magnificent lighting by Tom Bevoort rounding off the fantastic visuals, Shoot the Moon is pure spectacle, as visceral and haunting as a Hitchcock film, as it takes us through a journey of life filled with sultry moments, suspense and above all, love. 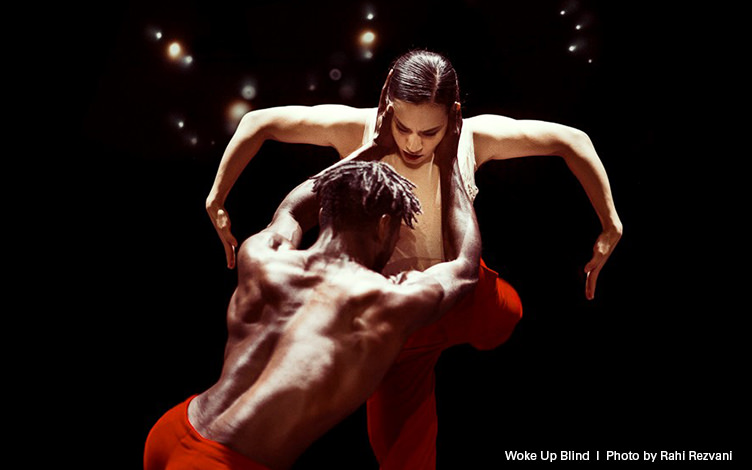 In Marco Goecke’s Woke Up Blind, Lydia Bustinduy, Aram Hasler Prince Credell, Olivier Coeffard, Chuck Jones, Jorge Nozal and Jianhui Wang dance a dance of reckless youth and passionate love set to two songs by Jeff Buckley – ‘You and I’ and ‘The Way Young Lovers Do’. Both powerful songs with frenetic guitar riffs, Woke Up Blind brings us straight to the core of human emotion with the highly complex choreography that brings physical form to the crisp music, as articulated by the dancers. Udo Haberland’s lighting is constantly shining down upon the dancers’ upper bodies, while the red pants donned by them too draw our eyes and attention at all times. We see the dancers come together to form a symmetrical shape, moving as one to showcase brilliant, spellbinding choreography, their upper body movements illuminated under the complex light work showing off just how diverse and multifaceted NDT1 is with its commitment to quality across all aspects of a performance. 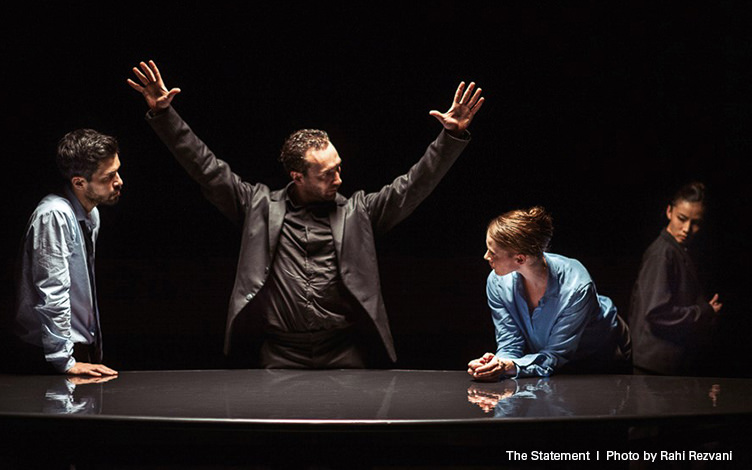 In Crystal Pite’s The Statement, perhaps the most theatrical choreography of the four, we witness the stifling setting of a boardroom, between two different groups of people. Set to a spoken word soundtrack based on a script written by Jonathan Young, The Statement is part play and part dance, as we witness Chloé Albaret, Aram Hasler, Jon Bond and Roger Van der Poel dressed in office suits, engaged in a battle of wits around the conference table. Suspicion and doubt fill the air as the dancers lip sync to the script, asking each other about a supposed statement made by upper management, with no way to confirm or deny it. There is a sense of fear that hangs, with the staff unable to discern if something is on or off the record, out of self-preservation against the corporate world’s espionage.

Beyond the lithe, smooth choreography performed by the dancers (effortlessly sliding across the conference tables in a single movement, for example), the dancers capture the very essence of the spoken word, their act of lip syncing in itself a form of dance as they mouth each word to the precise second, emoting and bringing out every nuance of the script.There is clever manipulation of the set as one particular scene sees the dancers performing both on and under the table, while Tom Visser’s smart lighting kept the dancers focused and aware of exactly when to come on. A multifaceted performance that combines the best of dance and theatre, one can only imagine how much hard work and rehearsals have gone into this piece to have made it so fluent, so perfectly timed and well expressed in both body and face. 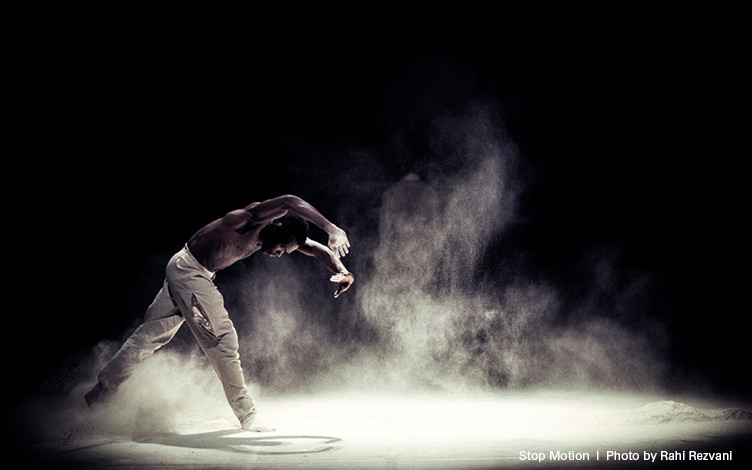 NDT1 ended off with the spectacular Stop-Motion by Sol León & Paul Lightfoot. Set to haunting music by Max Richter and performed by Roger Van der Poel, Sebastian Haynes, Jianhui Wang, Meng-Ke Wu, Sarah Reynolds, Chloé Albaret, Prince Credell and Marne van Opstal. Stop-Motion explores loss and grief, with its intricate choreography supported by video projections on large screens. Here, every dancer is given the opportunity to show off their capabilities – as time goes by, a new layer is added in each scene and a new dancer is introduced until all the dancers are onstage. On video, we see a man falling through time, bringing to mind the image of an hourglass as sand falls as he does, while at other times, we see a young daughter moving in slow motion, and it feels as if time is grinding to a halt, setting the tone onstage as the dancers perform.

In front, the dancers then bring that notion of slowed time to life with ‘sand’, while Prince Credell begins the dance, sweeping his feet with grace and kicking up the sand, changing the scene. As much as it is a visual spectacle with the amount of skill, elegance and poise displayed, there is a strong emotional element that anchors us to the piece as well, such as when we witness a dancer laying down on the stage while another begins to pile sand into a mound beside him, almost as if it is a funereal act to send him to the afterlife. Stop-Motion is all about stripping our grief down to its barest emotion, as it becomes a means of slowing down time to stem the pain of another’s death. As the drapes fall from the sides of the stage and retract, all that is left is a bare stage, with the dancers performing. It is this simplicity allows their movements to evoke the beauty of the human form, and as the entire lighting rig descends, it feels as if we have finally broken free of the grasp of grief, back in the present once more. Through the power of dance, the performers work through the notion of grief to transform pain into beauty, and we are left with nothing but peace, hope and satisfaction at this ephemeral display of the human spirit.