Ashes to ashes, dust to dust

The ambitious A Requiem For Change takes inspiration from social activist Naomi Klein’s book This Changes Everything, tackling big, contemporary concepts of climate change, political upheaval and capitalism. A devised work by David Glass in collaboration with students from the East 15 Drama School and LASALLE College of the arts, A Requiem For Change goes surreal in order to fully expand on and explain its many huge issues and themes, as we loosely follow a narrative of sisters Naomi and Klein, the former a musician attempting to get pregnant, and the latter an investigative journalist researching capitalism and its effect on climate change.

Perhaps the most arresting thing about A Requiem For Change from the get go is its unusual set. Playing at the Singapore Airlines Theatre, audiences are not seated in the usual area, but instead seated on the stage itself. The set itself appears to be a microcosmic desert (thankfully, audiences are given face masks before entering the theatre), with set pieces such as a doorway acting as a portal between worlds, or a giant, tattered piece of cloth that doubles as a screen for projections when raised. Trapdoors hidden all over the set are also a pleasant surprise, as characters use these like gopher holes, popping in and out of them like an insane game of whack-a-mole, while a harness even descends to the stage from time to time to lift characters on high, or involuntarily, putting them in precarious positions.

There is always the sense of the epic, with the events of the play feeling cataclysmic almost, with Shaggy’s hypnotic AV design of masses protesting or dust storms swirling onset, Tommy Wong’s lighting design at times plunges the stage in darkness to leave only a small pool of light to transport characters to a mystic vacuum, at others blazing forth from the usual seating space to blind audiences with their brilliance. Key to the production is Titus Lemuel’s crescendo-heavy soundtrack, enveloping the stage and all who are on it in the roar of time and space itself. All in all, these make for one of the most innovative sets we’ve seen in ages, a visually arresting production that impresses from the get-go and only serves to continue surprising as the play wears on.

On the other hand, how much one enjoys the story of A Requiem for Change is heavily dependent on how much one appreciates the abstract qualities and heavy symbolism and metaphor employed in the script. A Requiem For Change is less a linear narrative than it is a collection of scenes loosely interconnected, with ‘leads’ Naomi and Klein driving the story. Klein (Eilidh Harrower) undergoes an odyssey of a sorts, coming into contact with characters as strange as the Joker, a transsexual Dorothy from the Wizard of Oz, and even an entire plane full of zombies, attempting to right the wrongs of the world through brute force and chaos.

Far more compelling is Naomi’s story, played convincingly by Michelle Chiam as all one needs to see is her pained expressions as she fails time and again to get pregnant, crushing disappointment emanating from her being. As to what end this achieves however, is left a little more flighty, exploring the human, emotional impact of the changes going on in the world, as Naomi goes through incredible loss after loss. Sandwiched in between these parallel narratives are scenes of angry mobs engaged in fisticuffs as they throw dust at each other, and a third, loose narrative of Naomi and Klein’s Jewish grandfather (Krish Natarajan) and his chance meetings with waitress Alice (Patricia Gabriel, brilliant and one to watch out for in her brief moments onstage) as he waxes on about concepts of truth interwoven with Disney.

What A Requiem For Change amounts to then, is a meandering mood piece that one enjoys less for its narrative and more for its outrageous, surprisingly accurate depiction of the chaos of the modern world, pre-empting an apocalyptic, cataclysmic end. With an innovative creative team that has produced one of the most intriguing visuals we’ve seen, and truths that hit hard in their abstraction (occasionally even resulting in some laugh out loud moments), A Requiem For Change is a fascinating culmination of ideas given form, a fantasy and nightmare version of the world we live in today that grants both hope and fear of what lies ahead, if even we make it that far. 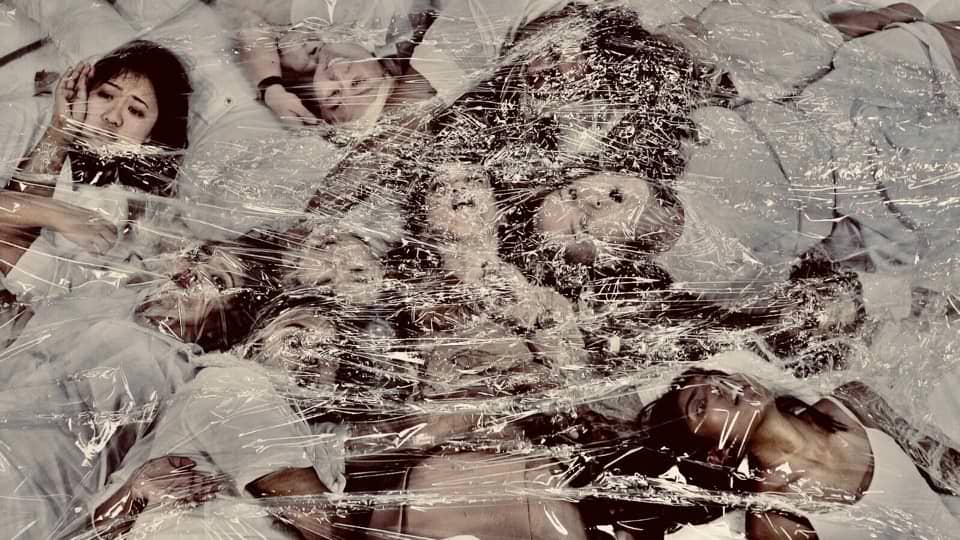 A Requiem For Change played at the Singapore Airlines Theatre at LaSalle College of the Arts from 21st to 24th November 2018.

0 comments on “Review: A Requiem For Change by LaSalle College of the Arts”